Accessibility links
#RendangGate: Why 'MasterChef UK' Is Uniting Malaysians In Outrage : The Salt When a Malaysian contestant was booted off the cooking show because her take on chicken rendang, a classic Malay dish, wasn't "crispy" enough, it sparked a controversy highlighting cultural ignorance.

Why 'MasterChef UK' Is Uniting Malaysians In Outrage

Why 'MasterChef UK' Is Uniting Malaysians In Outrage 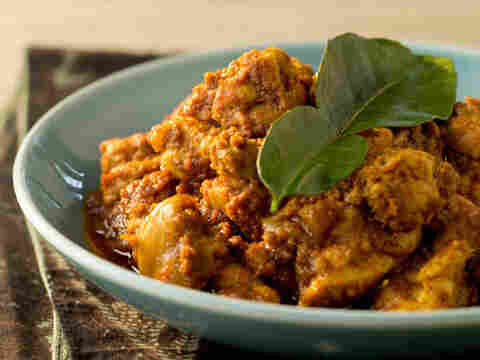 Malaysian rendang is not simply a popular dish — it is a national treasure. It's a "low and slow" dish, in which the meat is cooked in highly spiced coconut milk for several hours. It's never supposed to be crispy, despite what MasterChef UK judges might think. Above, chef Christina Arokiasamy's chicken rendang. Christina Arokiasamy hide caption

It's not often that chicken skin ignites an international controversy, but leave it to a competitive cooking television show to do just that.

MasterChef UK judge Gregg Wallace found himself in the spotlight following the airing last week of an episode in which he criticized contestant Zaleha Kadir Olpin's rendition of a classic Malaysian dish, chicken rendang. "I like your rendang flavor, that's like a coconut sweetness," he said. "But the chicken skin isn't crispy. It can't be eaten, but all the sauce is on the skin I can't eat."

And this is where things went terribly wrong, unexpectedly uniting people across Malaysia and Indonesia, spawning a Facebook group and an online petition, and drawing sharp criticism from Malaysia's foreign minister, Datuk Seri Anifah Aman, who accused Wallace of "whitesplaining." The controversy is even being called "RendangGate," and it prompted British High Commissioner Vicki Treadell, a Malaysia native, to tweet to the judges, "#Rendang is an iconic #Malaysian national dish not to be confused with Indonesian options... It is never #crispy."

It didn't help when Wallace's fellow judge, John Torode — who didn't criticize the texture of the skin but correctly commented on the chicken not being properly moist and tender — said in a now-deleted tweet, "Maybe rendang is Indonesian! Love this!! Brilliant how excited you are all getting ... Namaste."

Talk about adding insult to injury. Some 60 percent of Malaysians and 87 percent of Indonesians practice Islam, so the use of a traditional Hindu greeting was puzzling at best, and ignorant at worst.

Ignorance is exactly what chef Christina Arokiasamy, host of the Cooking Channel's The Malaysian Kitchen and author of a cookbook by the same name, sees as the root of the controversy. "The judges didn't understand the dish itself," says the Kuala Lumpur native. "We have to be culinary historians, so that we understand what we eat and where it comes from."

What's key to understanding Malaysian rendang is that it is not simply a popular dish — it is a national treasure, beloved by millions, even topping CNN's "World's 50 Best Foods" list. It's a "low and slow" dish, in which the meat — chicken, beef, goat, duck, lamb, pork, or even potatoes or tofu — is cooked in highly spiced coconut milk for several hours, often over an open fire, permeating the entire neighborhood with the scent of cinnamon, cloves, lemongrass, galangal and turmeric. 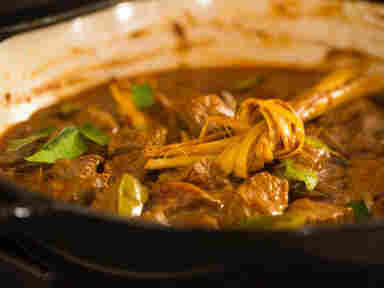 Lots of meats can be used in rendang — chicken, beef, goat, duck, lamb, pork — or even potatoes or tofu. Above, a beef rendang. Christina Arokiasamy hide caption

"When you are making rendang," says Arokiasamy, "all your neighbors know that a celebration is coming."

While Malaysians are clearly passionate about their national dish, they are also quick to note that its origins are in neighboring Sumatra, a large Indonesian island just south of the Malay Peninsula. Each region has slightly different version of the dish — Indonesian rendang is perhaps more heavily spiced — but all share common elements.

"Malay people in Indonesia, Singapore and Malaysia all share similar DNA, which is probably why this dish is popular in all three nations when it comes to eating it," says cookbook author Pat Tanumihardja, who was raised in Singapore by Indonesian-Chinese parents. "It's both a special occasion and everyday dish, a little laborious so it's prepared at home for special occasions and eaten at a restaurant or food stall as a casual dish."

To help provide Westerners with a base of comparison, Arokiasamy likens rendang to beef bourguignon, the classic French dish that involves braising cubes of beef for three or four hours in the oven, resulting in tender meat that has been infused with a flavorful cooking liquid composed of red wine, beef stock, garlic and herbs. MasterChef UK judge Torode, a native of Australia, where Malaysian cuisine is popular, clearly did understand the proper cooking technique for rendang, noting that it should be "really, really soft and falling apart."

Indeed, chicken rendang is a braised dish, which is why the idea of it having crispy skin is such an affront. In fact, the closest that chicken rendang seems to have come to having a crispy skin was when KFC outlets in Singapore created their own version for a limited time last year, pouring a rendang-style sauce on fried popcorn chicken served over rice. KFC even got in on the #RendangGate act with a Facebook comment: "The only time chicken rendang was crispy was in 2017. #onceinalifetime"

"The dish is so important in the way it's cooked," says Arokiasamy. "The meat is slowly simmered in the spiced coconut milk broth until all the broth is evaporated, which plumps up the meat. And then what is left is the oils from the coconut milk and the spices. What you get is a dried braised meat, coated in the oil to seal in the flavor. And the complexity from the coconut and spices is so fragrant and unbelievable. The time that it takes to cook the dish is often underestimated and most people try to rush it."

And this is why Arokiasamy is not prepared to give MasterChef contestant Olpin a total pass when it comes to how she prepared and presented the dish. She says mistakes were indeed made that led to Olpin's downfall. Notably, Olpin tried to prepare the recipe in a scant 90 minutes, less than half the time typically allotted. And she presented atypically large pieces of chicken, which may have been her attempt to keep the chicken from becoming tough, since she was cooking the meat in a shorter time and likely at a higher temperature.

As for Olpin, she stood by the dish that ultimately eliminated her from the competition. Her chicken rendang was served as an accompaniment to Nasi Lemak, a beloved Malaysian rice dish served with crispy anchovies, fried peanuts and omelet. But the chicken rendang was clearly the one component in the dish that did not wow the judges, who had previously been impressed with her South Asian recipes. Nevertheless, writing on Instagram, Olpin said, "I stand by my way of cooking traditional Nasi Lemak. Will not change it for the world."

Meanwhile, Malaysian Foreign Minister Aman saw a silver lining to the controversy: "Zaleha Kadir Olpin and her chicken rendang indirectly united Malaysians," Aman wrote on Facebook. "It is amusing that foreigners try to teach Malaysians about their own traditional food. ... You have succeeded in a way that many of us politicians could not, to unite Malaysians in the most divisive of times."