Accessibility links
Don't Mess With The Sweet Potato Pie: A Museum Wrestles With 'Authentic' Black Menu : The Salt When the National Museum Of African American History and Culture's cafe tweaked traditional Southern black dishes, some customers weren't having it. It just shows how tricky "authentic" food can be. 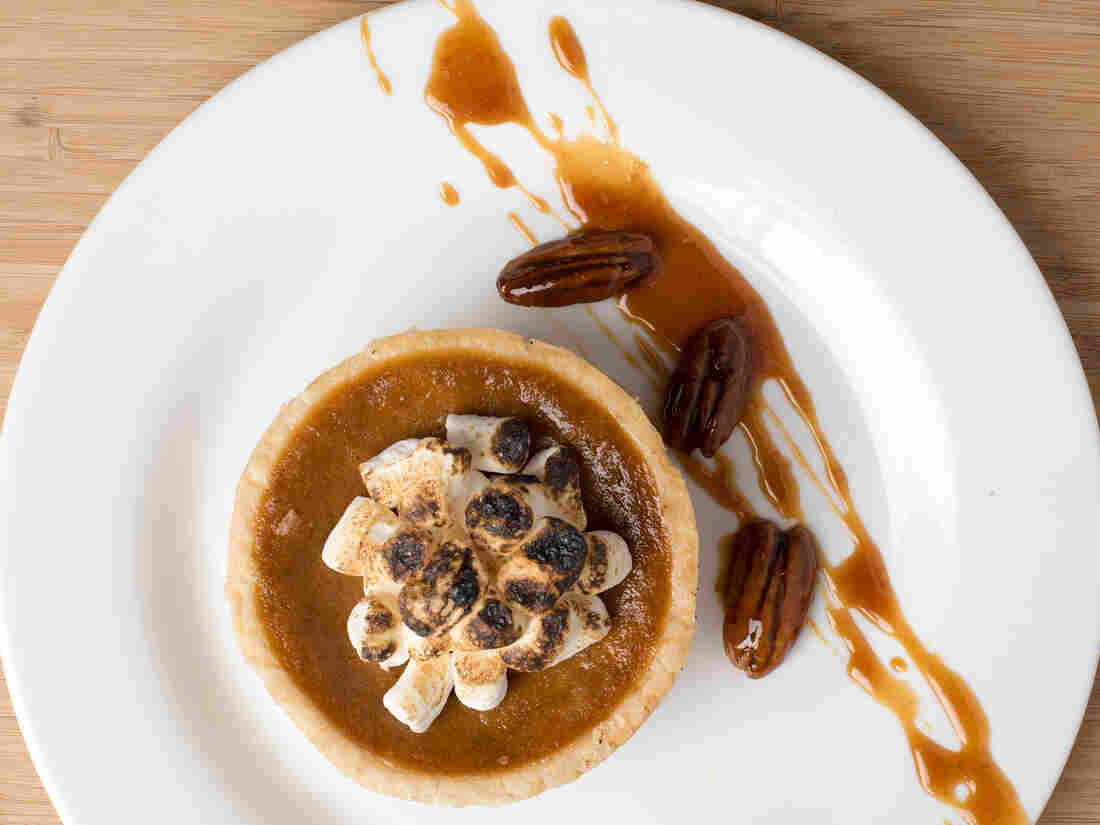 Sweet Potato Pie served at the Sweet Home Cafe inside the National Museum of African American History and Culture in Washington, D.C. When the museum opened in October 2016, the pie contained a twist, ginger. But customers used to more traditional Southern African-American preparations of the dish weren't having it. It just shows how tricky "authentic" food can be. Marvin Joseph/The Washington Post/Getty Images hide caption 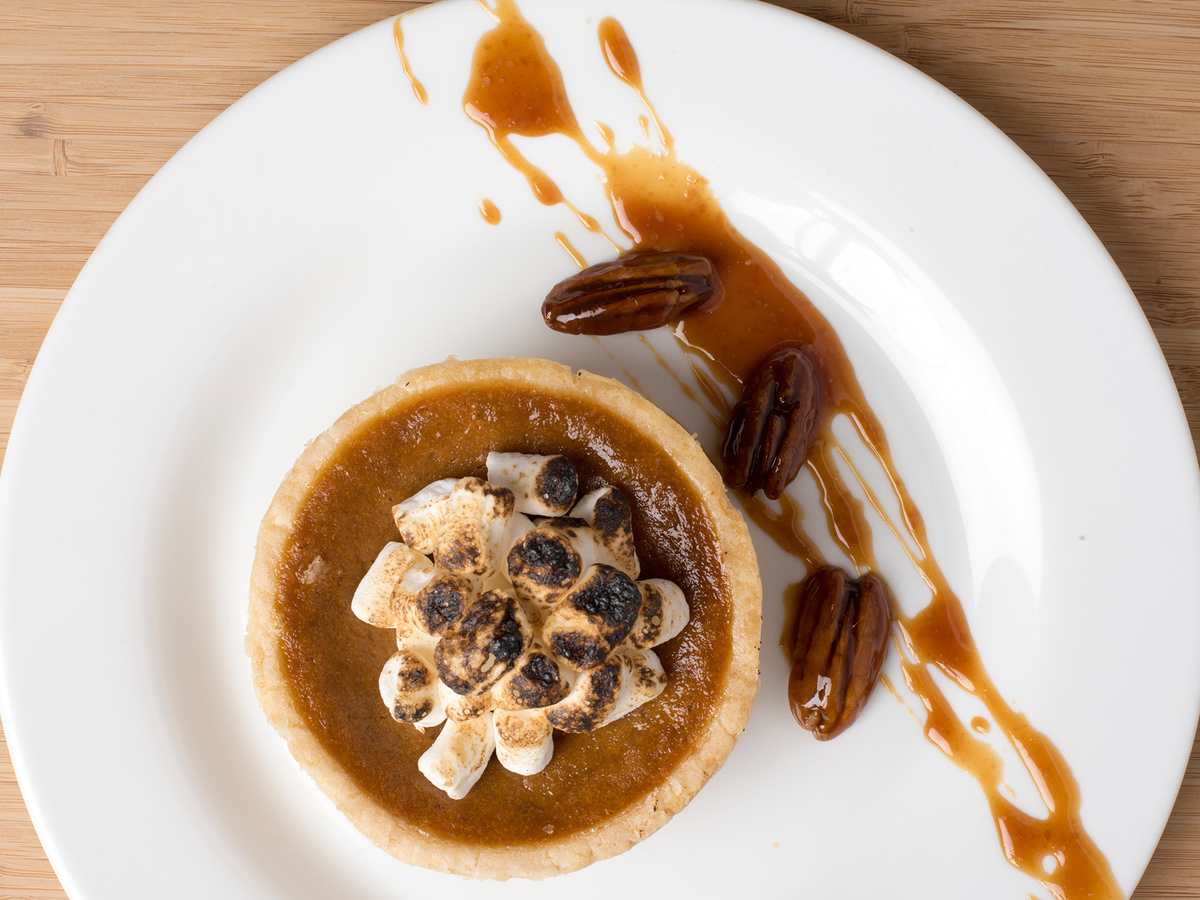 Sweet Potato Pie served at the Sweet Home Cafe inside the National Museum of African American History and Culture in Washington, D.C. When the museum opened in October 2016, the pie contained a twist, ginger. But customers used to more traditional Southern African-American preparations of the dish weren't having it. It just shows how tricky "authentic" food can be.

When Melanie McNeil roused her 8-year-old great-grandson, Byron Ridenour-Wright, out of bed in Ohio last fall, and loaded him onto a bus bound for the National Museum of African American History and Culture, she didn't have high hopes for lunch.

"I thought we were going to have to...work our way around to find some accommodations for food," she says. But after walking the galleries for the morning with her colleagues from the United Black Social Workers, who'd organized the trip, McNeil and Byron found their way to Sweet Home Cafe in the museum's lower level and loaded up their plates: buttermilk fried chicken, collard greens, macaroni and cheese, and potato salad. Later, they added some sweet potato pie.

And then, like any other self-proclaimed "food connoisseur," McNeil quietly judged it.

McNeil didn't know it, but she was stepping into a low-grade controversy. After opening in October 2016, the cafe had received an insistent stream of requests for changes to its meals. It wasn't because of a lack of care with the menu, which was developed with the help of esteemed culinary historian Jessica B. Harris and geared towards offering a broad and authentic culinary experience. Most of the suggestions, delivered via the café's website and in-person conversations in the dining room, clustered around three of Southern African-American cuisine's most iconic dishes: Sweet potato pie, potato salad, and pulled barbecued pork.

So what had the cafe done — if not exactly wrong, then not exactly right, either? The answers provide a window into just how tricky the idea of authenticity in a meal can be.

For starters, the cafe had introduced a few tweaks to classics that didn't sit right with everyone. "We used a regular mayonnaise instead of Duke's" in the potato salad, says Jerome Grant, the café's executive chef, referring to a particularly creamy mayonnaise popular in the American South. He'd also used dijon mustard, giving it an upscaled tang, and slightly undercooked the potatoes so they would hold their shape.

For the sweet potato pie, Grant had introduced a twist he'd popularized at family gatherings after studying various techniques and cuisines in culinary school: ginger.

Meanwhile, the Southern tradition of barbecued pork was left off the initial menu. Instead, barbecue was represented by a barbecued buffalo brisket — a nod, says Grant, to barbecue's origin as a Native American preparation, as well as African-Americans' presence in the Western U.S. during the settlement period.

Putting a pulled pork sandwich, Lexington-style — ketchup and vinegar sauce — on the menu was easy enough. But the critiques of the other dishes appeared to stem from something a little more relative: authenticity and tradition, and the messy interplay between them.

Take the ginger in the sweet potato pie, a tweak that might seem modest. That little bite of spice didn't sit well with café visitors. "It was a bit different to the palates of our guests," says Grant, who revised the recipe to center on basics like brown sugar, sweet potato, evaporated milk and eggs. "Those are some of the things you just don't change," he says. "I've learned my lesson."

That doesn't mean a gingered pie is entirely out of place in a meal commemorating the food of enslaved African-Americans, says Michael Twitty, an African-American Southern food historian and author of The Cooking Gene. "If you gave that same sweet potato pie to a West African, they'd be absolutely thrilled," he says. "That sharp, spicy ginger taste is very common."

The broader changes Grant made to the potato salad in response to diners' feedback, meanwhile, have as much to do with the dizzying variety among "authentic" recipes as they do with a cultural mandate. Plain yellow mustard has replaced the dijon, and Duke's mayonnaise has replaced the thick, eggy one he had originally used. Potatoes are cooked until softened, and a few are mashed to give a pleasing thickness to the salad. Celery salt now augments the flavor from the finely diced celery that the salad contained from the beginning.

So the potato salad is more in line with the suggestions. But does that make it "authentic"?

"It's a tricky thing to make it this monolithic experience," says Thérèse Nelson, a chef and founder of the website Black Culinary History. As with traditional foods the world over, from Italy to Mexico to China, preparations differ not only between regions, but between states and even counties. "Is there celery in potato salad? I don't know," says Nelson. "All these things change region to region. Certain things are going to be different family to family," too.

"I'll judge somebody's food based on these classic things," Twitty says. But innovation can be tricky. "You don't play around; you do what the mamas did," he says.

Authentic or no, Ms. McNeil and her grandson had only a few quibbles with the menu —enough to mention to me, but not enough, said McNeil, to merit a comment to the chef. As we chatted over sweet potato pie in the cafe's spacious dining room, McNeil told me its crisp, thin crust was "extraordinary," and its spicing "perfect" — but she would have preferred it "a tad sweeter." As for the potato salad, she said, "overall it's pretty good, and it [does] have a ... homier flavor."

McNeil eyed the remnants of the potato salad on her tray and told me it was lacking the one elusive taste that makes a food authentic.

Tracie McMillan is the author of The American Way of Eating and teaches writing at New York University.