Accessibility links
Should California Winemakers Be Worried About China's Tariffs? : The Salt California produces about 85 percent of American wine, which is worth about $1.5 billion in exports. As of now, China imports little U.S. wine, but it's one of the world's fastest-growing markets. 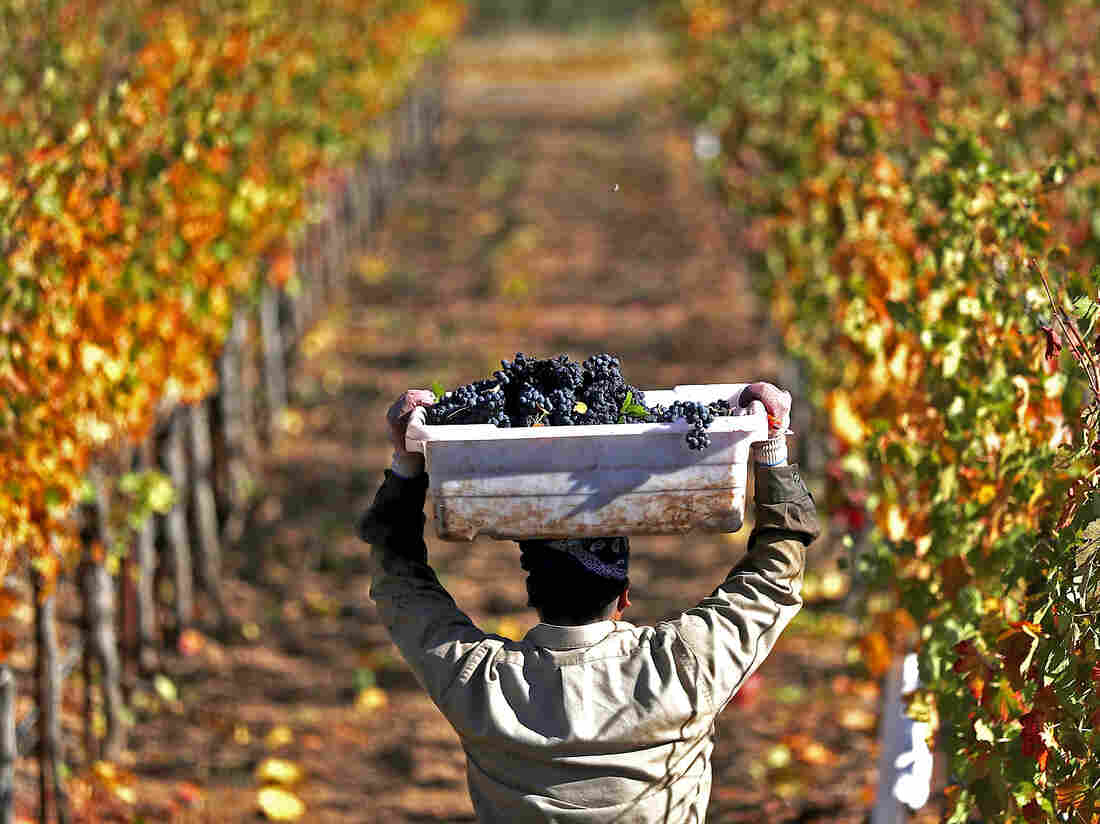 With the new tariff in effect, most American wines will incur duties of 29 percent. Justin Sullivan/Getty Images hide caption 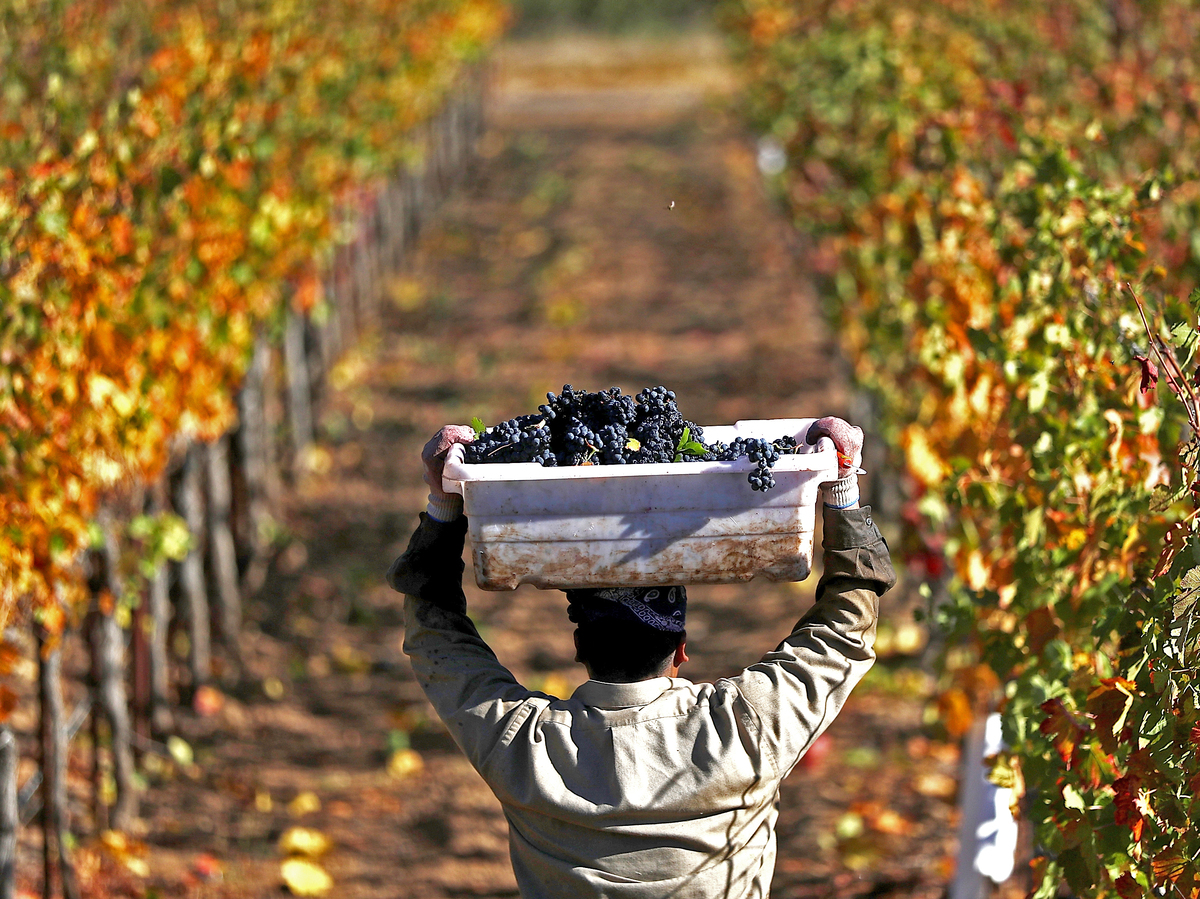 With the new tariff in effect, most American wines will incur duties of 29 percent.

California's vintners and grape growers are among the latest potential victims in the escalating trade spat between the U.S. and China.

Responding to U.S. plans to impose import duties on goods from China, the Chinese Ministry of Commerce reciprocated by introducing new tariffs on 128 U.S. products, including an additional 15 percent import tariff on wine.

Wine producers in California are concerned about the immediate and longer-term implications of this new tariff, on top of those already in place. Reports have already begun to circulate about orders being canceled, redirected or renegotiated as a result.

How worried should U.S. winemakers be?

The U.S. is a major player in the global wine industry both in terms of consumption and production.

Americans consumed 3.59 billion liters of wine in 2016, or about 11.1 liters per person. About a third of that was imported.

In terms of production, the U.S. ranks fourth after Italy, France and Spain — making more than 3 billion liters in 2016. California produced about 85 percent of that.

While the vast majority of U.S. wine is consumed domestically, about 10 percent is shipped overseas. In 2017, the U.S. exported 380 million liters of wine worth $1.46 billion. Canada was the top destination, importing 28 percent of the total, followed by the U.K. with 15 percent, Hong Kong at 8 percent and Japan with 6 percent.

China, for its part, imports quite a bit of wine. Very little, however, comes from the U.S.

That puts China sixth among top destinations for U.S. wine exports, with a share of about 5 percent.

These figures underestimate the true value somewhat because more than half of Hong Kong's imports are then shipped or smuggled to China. Even allowing for these adjustments, Chinese consumption of U.S. wine makes up less than 1 percent of the total value of American production.

It's clear that at the moment China is not all that important to most California wine producers. Why then are U.S. wine producers anxious about new tariffs disrupting trade to this relatively minor market?

It's all about the future. Although per capita consumption of wine in China remains very low, China is the world's fastest-growing wine market and is expected to soon become the second largest, after the U.S.

Economists who have studied these markets project further significant growth in China's demand for wine, including premium wine imports.

This would make getting pushed out of China especially troubling at a time when global per-capita wine consumption has been declining, especially in Europe.

Already at a disadvantage

Even without the new tax, U.S. exporters were facing a tilted playing field that would have constrained the potential for increasing California's market share.

Without the new tariffs, China already collected a tariff of 14 percent on most U.S. wine — though it can reach as high as 20 percent in some categories. In contrast, wine from some countries, such as Chile, Georgia, New Zealand and, starting next year, Australia, enter China duty-free.

With the new tariff in effect, most American wines will incur duties of 29 percent.

Hong Kong, however, does offer a back door to U.S. wine. The China-governed island phased out its own steep tariffs on wine imports a decade ago. This has created an incentive for smuggling.

So what does all this mean?

Given the small share of total U.S. wine currently going to China, the new tariff would not likely have a material effect on the American wine industry, whether in terms of domestic prices or producer bottom lines. Still, it will be disruptive for particular businesses especially in the near term.

The real concern for American wine producers is that high tariffs applied today may make U.S. wine too expensive and cause them to miss out as hundreds of millions of Chinese middle-income consumers increase their wine consumption over the next decade.

More broadly, if the trade spat escalates to a trade war, serious damage will be done to all of U.S. agriculture, including grape and wine producers. Even more troubling, if the loss of trade causes broader damage to the U.S. economy, it could even affect demand for California wine in its most important market: the United States.