Accessibility links
Republican Farm Bill Calls On Many SNAP Recipients To Work Or Go To School : The Salt Republicans in Congress have released their version of a new Farm Bill. It imposes new requirements on low-income recipients of food assistance, but continues traditional subsidies for farmers. 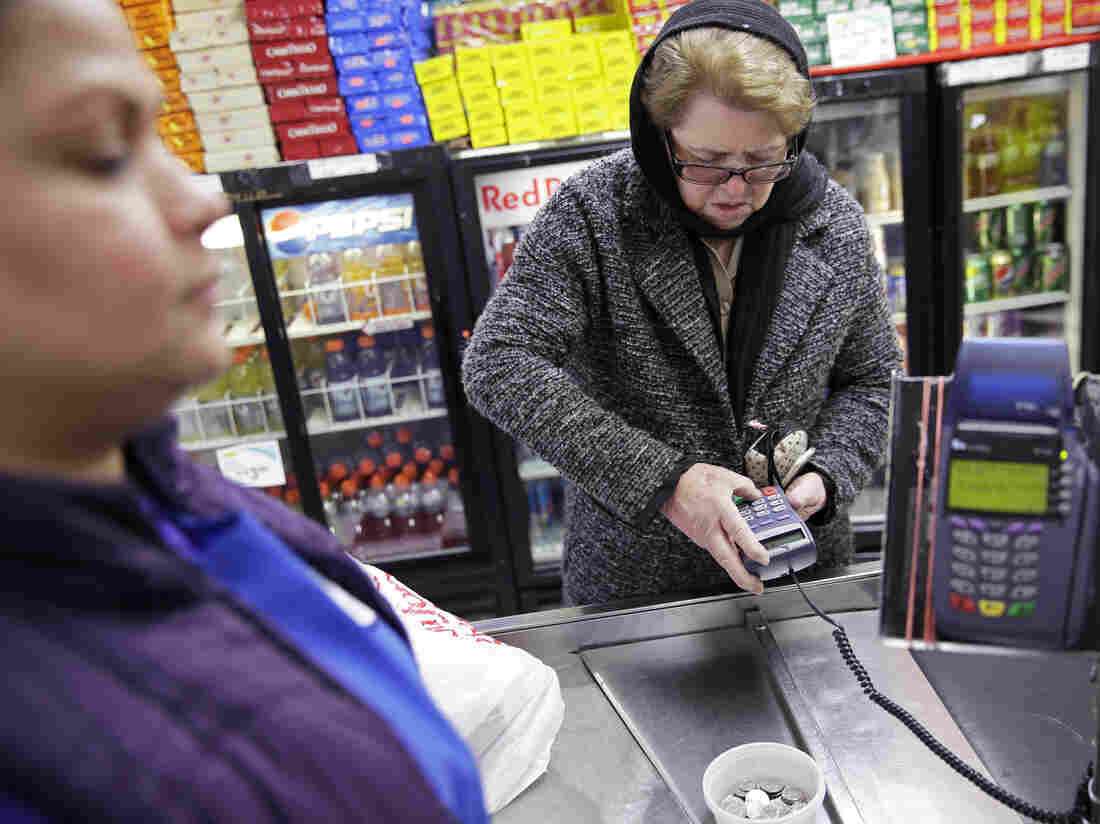 Hilda Herrera of New York state is one of 40,000 people who rely on the SNAP program for help buying groceries. Seth Wenig/AP hide caption 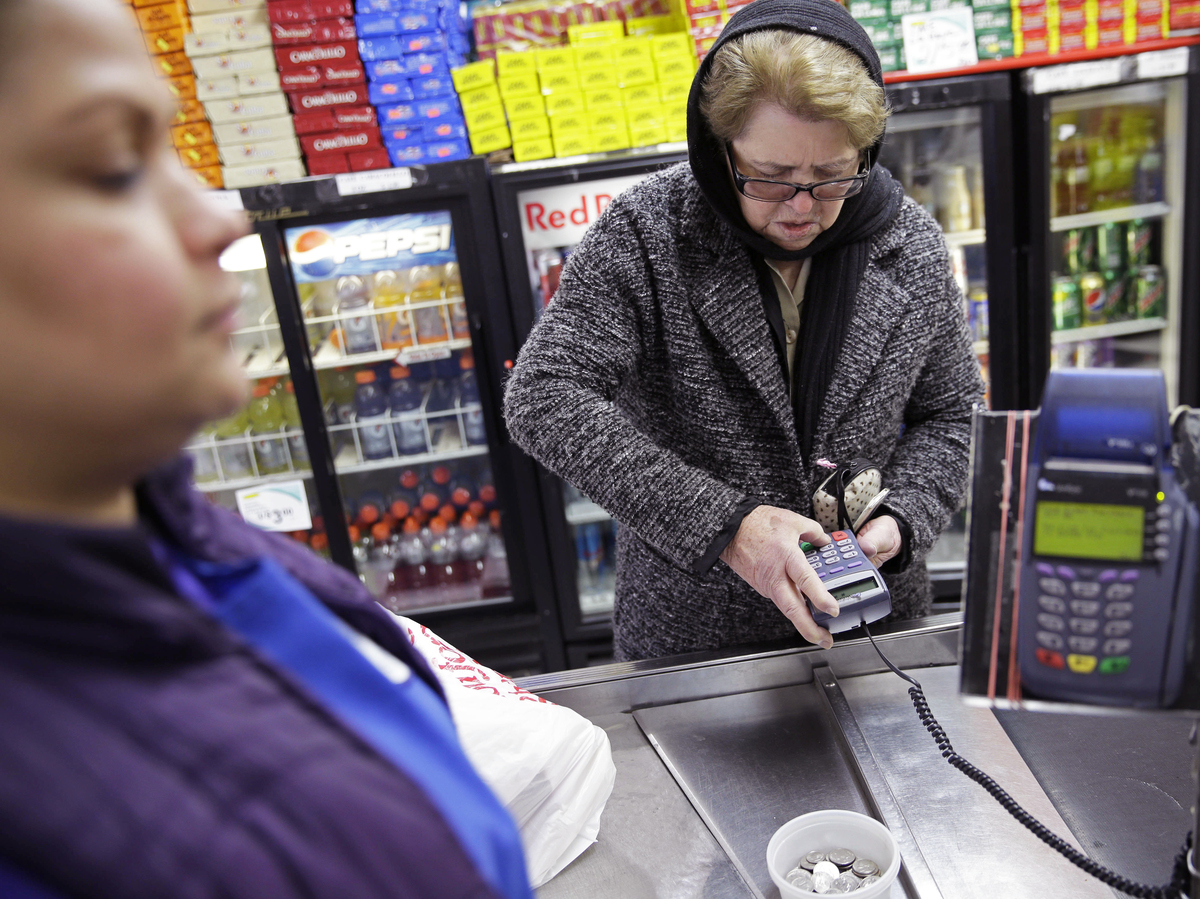 Hilda Herrera of New York state is one of 40,000 people who rely on the SNAP program for help buying groceries.

If Republicans in Congress have their way, millions of people who get food aid through the Supplemental Nutritional Assistance Program (SNAP) will have to find a job or attend job training classes for about 20 hours each week, or lose their benefits.

That's the biggest and most controversial part of a Republican-drafted Farm Bill unveiled this week by Michael Conaway, R-Texas, chairman of the Agriculture Committee in the House of Representatives. The rest of Conaway's proposal, however, represents continuity. Existing subsidies for farmers would continue in their current form.

Democrats — even those who support subsidies to farmers — are vowing to fight Conaway's draft bill because of its changes to the SNAP program. Collin Peterson D-Minn., the senior Democratic member of the House Agriculture Committee, said the SNAP changes would "increase food insecurity and hardship." He accused his Republican colleagues of breaking up "the long-standing, bipartisan, urban-rural ... alliance" that has supported past farm bills.

Farm Subsidies Persist And Grow, Despite Talk Of Reform

Republicans, though, say the work requirement proposals are meant to assist those who may have fallen on hard times get back on their feet, off public assistance, and into the workforce.

"We believe that breaking this poverty cycle is really important," Conaway told reporters at a news conference unveiling the bill Thursday.

The legislation calls for able-bodied adults between the ages of 18 and 59 to work or be enrolled in a job-training program for at least 20 hours a week beginning in fiscal year 2021. That minimum number of hours would jump to 25 hours per week starting in fiscal year 2026.

Those who violate the work requirements could become ineligible for SNAP benefits for a 12-month period. Subsequent violations could result in three years of lost benefits, "unless an individual obtains employment sufficient to meet the hourly requirement or is no longer subject to the work requirements at an earlier time," and other conditions, according to language in the summary of the bill.

The bill also aims to cut down on potential SNAP fraud. It calls for creating a Duplicative Enrollment Database that would determine who is eligible for benefits and "to prevent supplemental nutrition assistance program participants from receiving duplicative benefits in multiple states," according to the text of the bill.

A plan to allow states to implement a drug testing program for certain food stamp recipients is not in the draft. But Conaway did not rule out that one could be added later.

"It's not in the bill base text, but we have some members on the committee who are keenly interested in that," Conway said.

SNAP helps more than 40 million needy individuals, and nutrition programs account for approximately 80 percent of the cost of the current farm bill.

Conaway's draft bill does not mention the idea — floated by the Trump administration — of distributing a portion of SNAP aid in the form of boxes of nonperishable food, rather than debit cards that people can use to buy food in supermarkets. That idea, put forward in the president's most recent proposed federal budget, was widely criticized by anti-poverty advocates and grocery stores.

Traditional multi-billion-dollar programs aimed at supporting farmers, such as federally subsidized crop insurance, are preserved in Conaway's proposal. The vast majority of these subsidies go to the most widely planted crops: corn, cotton, peanuts, rice, soybeans, and wheat. The bill also maintains restrictions on sugar imports that prop up the price of domestically produced sugar.

These subsidies have come under increasing criticism in recent years. Public health advocates say that government subsidies, if they exist at all, should promote the most nutritious crops, such as vegetables and fruit.

Environmentalists, meanwhile, are condemning a provision in Conaway's draft that would amend a completely separate law, one that governs pesticides. Conaway wants to eliminate a requirement that the Environmental Protection Agency consult with the other agencies, such as the Department of Interior, to determine whether a new pesticide could harm threatened or endangered species.

In a statement, the Center for Biological Diversity said that this proposed change would " ignore pesticides' harms to endangered species and eviscerate all meaningful protections for fish, animals and plants under the Endangered Species Act."

The draft bill proposes other small changes in farm policy that reflect new concerns. It authorizes an expansion in enforcement of the National Organic Program to prevent fraudulent labeling of imports as organic. If passed, it would also authorize more funding to promote farmers' markets, and to fight the growing problem of wild pigs that have been destroying crops in certain areas.

The Farm Bill traditionally comes up for renewal every five years. Congress passed the current version in 2014.