Accessibility links
The Complex Code In A Potato Chip: Why We Love The Flavors We Do : The Salt Much can affect our choice of munchies: gender, age, income and cultural preferences. And our cravings for one of the world's favorite salty snacks — with its myriad flavors — says a lot about us. 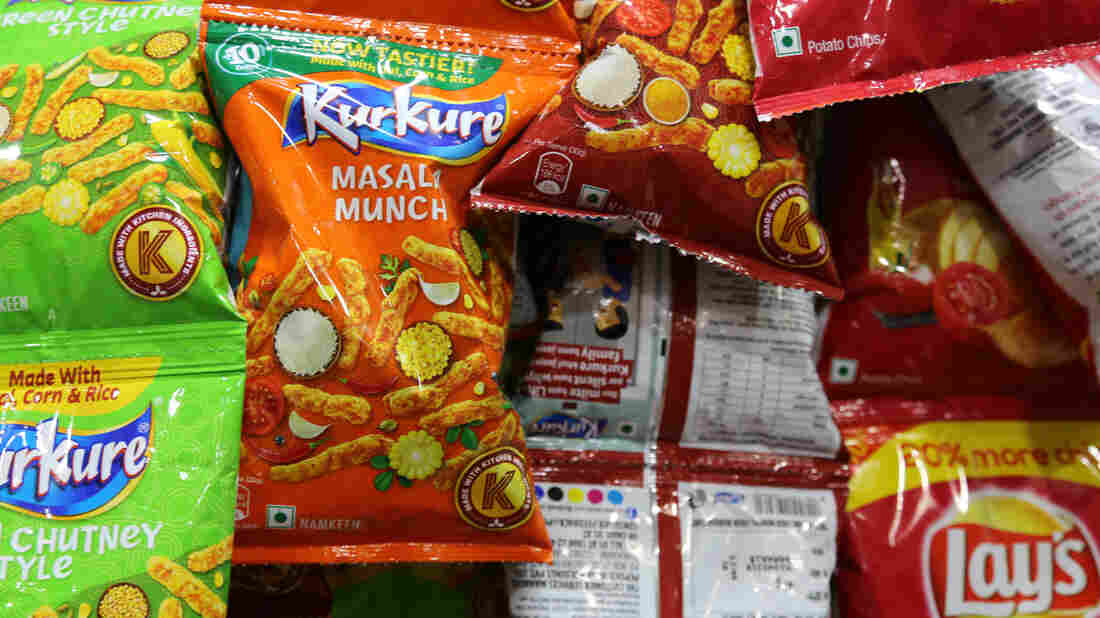 Our choice of snacks is influenced by gender, age, income and even cultural flavor preferences. Maanvi Singh/for NPR hide caption 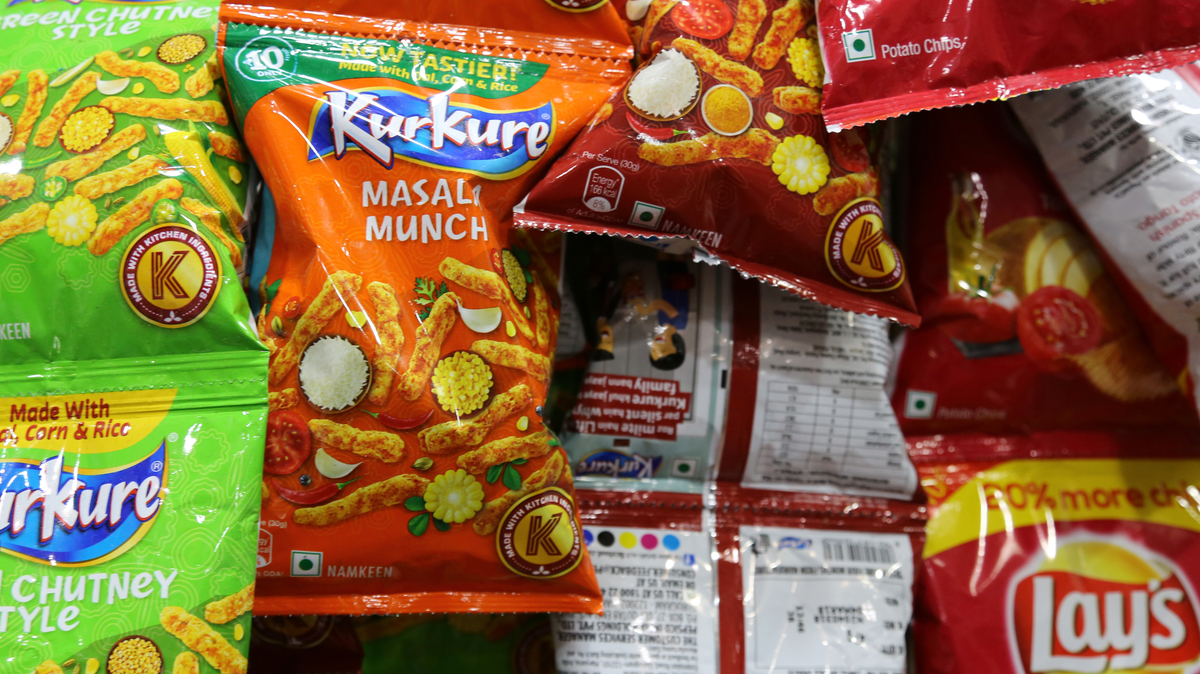 Our choice of snacks is influenced by gender, age, income and even cultural flavor preferences.

If the recent Lady Doritos furor is anything to go by, then consumers have very strong opinions about how we're meant (or not meant) to eat our chips.

One could make a reasonable argument that comments made by Indra Nooyi, CEO of PepsiCo, which owns the Doritos brand, were insulting. (She suggested that a version of Doritos tailored to women's more dainty snacking habits might be in order.) But a case could also be made that her remarks were inspired by culture, language and research as real as the Twitter users who didn't like them.

After all, snacking is influenced by demographics such as gender, age, income and even cultural flavor preferences. This has never been truer than when examining a global snacking staple — potato chips (or "crisps," if you prefer). Whether it's hickory-smoked barbecue in the U.S., sea salt and shrimp in Asia, or zesty jalapeño chili in Latin America, each flavor is a result of various cultural attributes, consumer trends, biochemistry and in-depth analysis.

In fact, if any of those flavors made you drool a little bit, that just proves the point. Whether it's a desire to binge, peck or abstain, the interaction with a particular crunchy snack is the result of a heavily coded conversation between the consumer and the product.

What happens in the grocery aisle ...

According to Dr. Laura Oswald, president of Marketing Semiotics and author of Marketing Semiotics and Creating Value, the apex of the conversation takes place in the grocery store. That's where packaging, labels, text, cultural background and even shelf placement work together to create codes, or interpretive frameworks that that assign value judgments to the kinds of chips we enjoy (or avoid). Whether it's the shelf placement of a bag of Lays or the thicker paper of a bag of Kettle chips, these codes inform our expectations of everyday snack items, from their quality level to cost.

"Category codes facilitate brand choice at the shelf, because consumers do not need to read the ingredient panel on every product to separate healthy brands from their opposite," she says.

This is the reason why large, brightly colored bags of potato chips in flimsy, cheap packaging flood the bottom shelves — where small children are more likely to see them. It's also why "gourmet" potato chips typically occupy the top shelves in smaller, matte-style packaging with sophisticated text that appeals to adult consumers. This placement not only codes those potato chips as the snack of a "more cultivated" consumer, but also indicates a higher price.

Oswald says that these codes are embedded in consumers from a very young age. "Learning these codes is similar to learning a language — through regular exposure over time you learn the grammar."

And just like language, a set of semiotic codes in one country does not necessarily translate to another. How consumers buy and enjoy potato chips is influenced by the language and images through which they're interpreted. Using a comparison between a grocery store in the United States and a grocery store in India, Oswald says that "spatial codes are [also] dictated by culture."

"I can expect to be somewhat disoriented in emerging markets such as India, where the supermarket is divided into a vegetarian space and a non-vegetarian space," she says. "What would not make sense to me in Chicago is entirely rational in a culture which prizes the vegetarian diet."

The power of language

The same concept also pertains to phrasing. According to research compiled by Innova Market Insights, which houses a database that collects consumer trend information from more than 70 different countries, 4 out of 10 consumers in the U.S. and the U.K. have increased their consumption of what they call "healthy foods," or foods that at least market themselves as healthy. This includes potato chips that are "lightly salted," or "lightly sweetened." And in China, nearly 22 percent of consumers said that "Made with Real Ingredients" was an important factor in influencing their snack purchases. Unlike 20 years ago, a package of chips today might tell the consumer everything from the oil in which the chip was fried to the country where the potato or grain was harvested.

It should come as no surprise, then, that flavors are also culturally coded. Consistent with Innova's research, this demonstrates why chili and jalapeño chili are consistently popular food flavors in Latin America, while sea salt, cheddar and barbecue dominate in North America.

The seaweed flavor, while virtually unheard of in the U.S. 20 years ago, is now one of the top 10 selling flavors in North America. An increased interest in Japanese culture, including comic books, anime and sushi, have made that flavor of more interest to Western consumers, says Williams. And potato chip manufacturers have taken notice, capitalizing on the shift in consumer trends ... before they change again.

"Now people are really interested in Korean food, Korean electronics, and Korean pop culture, so kimchi might be a good idea for a new potato chip flavor," says Williams. "Twenty years ago, people would have laughed at the idea."

The shift in flavor preferences around the world are making previous culture-specific tastes much less relevant than they used to be. And while the most popular potato chip flavor in North America may be sea salt, some of the fastest-growing flavors include assorted vegetables, and lime.

Latin America, on the other hand, is developing a taste for pizza flavors, just as Asia is discovering the moreish qualities of cheddar cheese that American consumers have been munching on for decades.

"Flavor can be part of the strategy to make a company look like they are on trend all the time," says Williams.

But flavor also evokes strong physical and psychological reactions,because all the marketing, research and semiotics in the world can't sell a potato chip if you're not licking your fingers at the bottom of a bag with a feeling of deep satisfaction (or guilt). Regardless of which chips consumers enjoy eating most in Asia or Eastern Europe, flavor actually comes down to a matter of smell – not taste.

As noted in a 2017 study by Cornell University's Food Science Department, the importance of smell in potato chips "operates on a robust encoding-decoding process."

The nose plays a significant role in interpreting the smells from the foods we eat into experiences that are pleasant and delicious, or vile and disgusting.

Just like our eyes do in the snack aisle at the grocery store.

The stronger and more familiar the smell of potato chips, the more likely they are to be interpreted as an enjoyable taste. It's this mixture of psychological familiarity, along with the sensory enhancement of odorants, that is the true champion of flavors around the world — whether it's barbecue or red-bean curd, according to the Cornell study.

When we talk about different cultures, the conversation normally revolves around attributes that have evolved over thousands of years, like language, religion and social hierarchies. Snacking is a reflection of how these attributes are coded into daily life.

So give the Doritos lady a break, and eat chips according to whatever cultural specifications are relevant to you. Research suggests that you're going to anyway.

Jennifer Neal is a Berlin-based journalist, writer, presenter and stand-up comedian who writes about food, travel, politics and intersectional feminism. You can find more of her work on her website, or follow her on Twitter @LadyGodiva83