Accessibility links
The Super-Hot Pepper That Sent A Man To The ER : The Salt Carolina Reapers are some of the hottest peppers in the world. So hot, in fact, that for one man, participating in a pepper-eating contestant resulted in a painful, serious "thunderclap headache." 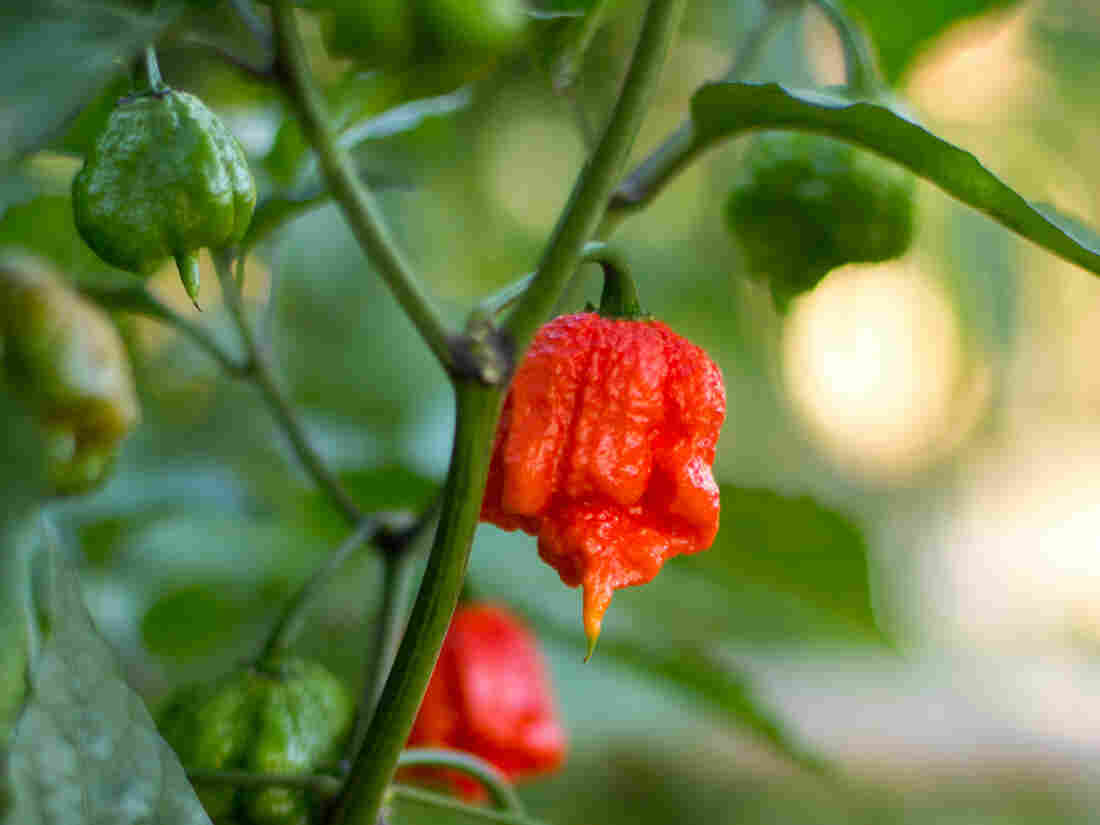 Carolina Reapers are some of the hottest peppers in the world. So hot, in fact, that for one man, participating in a pepper-eating contestant resulted in a painful, serious "thunderclap headache." Maria Dattola Photography/Getty Images hide caption 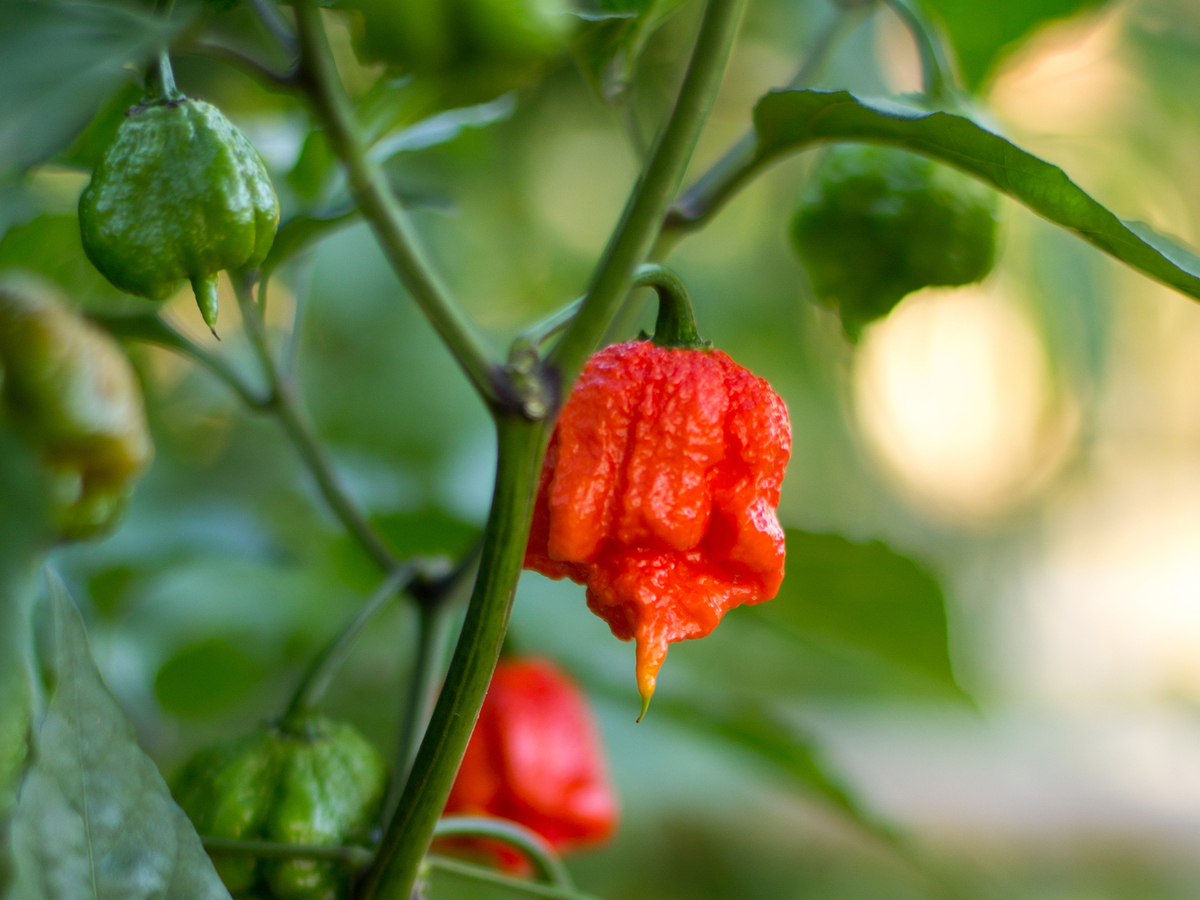 Carolina Reapers are some of the hottest peppers in the world. So hot, in fact, that for one man, participating in a pepper-eating contestant resulted in a painful, serious "thunderclap headache."

Doctors encounter all nature of odd things in their daily lives. Sometimes the stories end up as more than coffee-room chatter. Consider a case that spills over from the clinical to the culinary: the hot pepper and the horrible headache.

Dr. Kulothungan Gunasekaran has a knack for ferreting out odd events like this. On nine separate occasions, he has turned an unusual observation into a published case-report in the medical literature. But the story of the Carolina Reaper pepper and the thunderclap headache "is the most interesting one which we encountered," he says.

He was recently doing his residency at the Bassett Medical Center in Cooperstown, N.Y., when an otherwise healthy 34-year-old man came to the emergency room with a terrible headache. It had come on incredibly suddenly – like a thunderclap.

It turns out the man had been in a pepper-eating contest and had eaten a whole Carolina Reaper, which is high on the list of the hottest peppers in the world. Right away he developed one of these "thunderclap headaches." (Doctors actually use that term.) Gunasekaran says the man went home for a while but then was seized by another headache so painful it sent him to the emergency room.

Doctors ran a battery of medical tests and, ultimately, a brain scan called a CT angiogram, "which showed some narrowing of blood vessels in the brain," Gunasekaran says.

That could explain the patient's symptoms. The heat-inducing chemical in peppers, capsaicin, can trigger that kind of reaction, along with other sorts of discomfort.

The man was admitted to the hospital to treat his prolonged headache. Gunasekaran wasn't his doctor, but caught wind of the story and decided to write it up for a journal called BMJ Case Reports. His research led him to YouTube, where, no big surprise, there are plenty of videos of people trying to eat whole Carolina Reaper peppers.

Search for yourself, but suffice it to say there's plenty of bravado, followed by human utterances left best undescribed, self-recrimination, and at least in one case, an ambulance ride from London's Leicester Square to a hospital.

The ambulance ride aside (the victim blamed an undiagnosed pepper allergy), Gunasekaran's conclusion was that most people don't suffer dire consequences from eating these peppers.

The published case-report was a new one to Todd Schwedt, a professor of neurology at the Mayo Clinic in Phoenix and an expert on thunderclap headaches.

"I had never heard of one being triggered by a Carolina Reaper or any other chili pepper," Schwedt says.

Thunderclap headaches are really no joke.

"Folks will describe this as if they felt like something exploded in their head or they got hit in the back of the head," Schwedt says. "So it's really how quickly it becomes very severe that makes it a thunderclap headache."

One can linger for weeks, he says. About 1 in 4 of these headaches is triggered by constricted blood vessels — typically caused by something other than a hot pepper. That situation usually resolves gradually on its own. But sometimes these headaches can be the result of a dangerous event, like a burst or torn blood vessel in the brain.

"When someone has a thunderclap headache, it should be considered an emergency, and it needs to be evaluated urgently," Schwedt says.

The pepper-eater's story had a happy ending. Five weeks later, the New York man returned to the hospital for another scan and the blood vessels in his brain were back to normal.

Gunasekaran has also moved on in his medical career. His residency over, he now practices internal medicine at the Henry Ford Hospital in Detroit, where he is staying alert for more curious cases to report.