Accessibility links
In North Carolina, Hog Waste Is Becoming A Streamlined Fuel Source : The Salt North Carolina isn't rich in coal, natural gas or oil, but it has more hogs than nearly any other state. And for years, scientists and farmers have been trying to turn swine biogas into electricity. 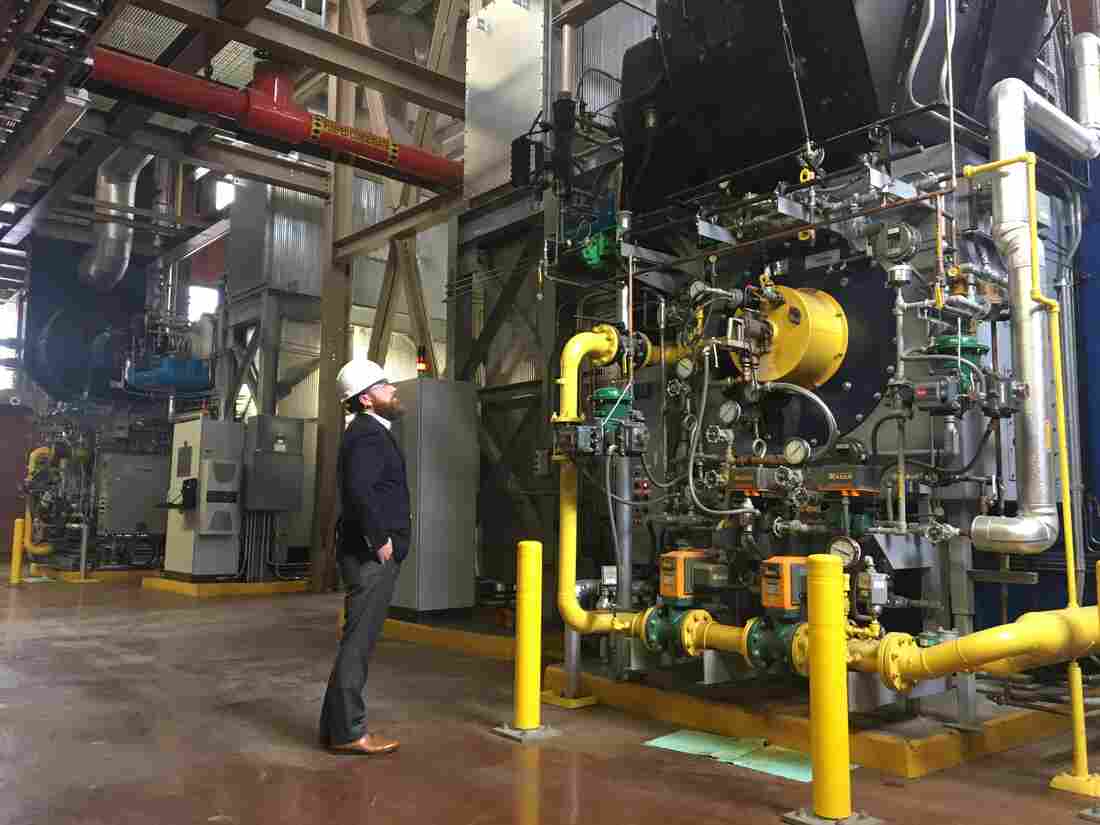 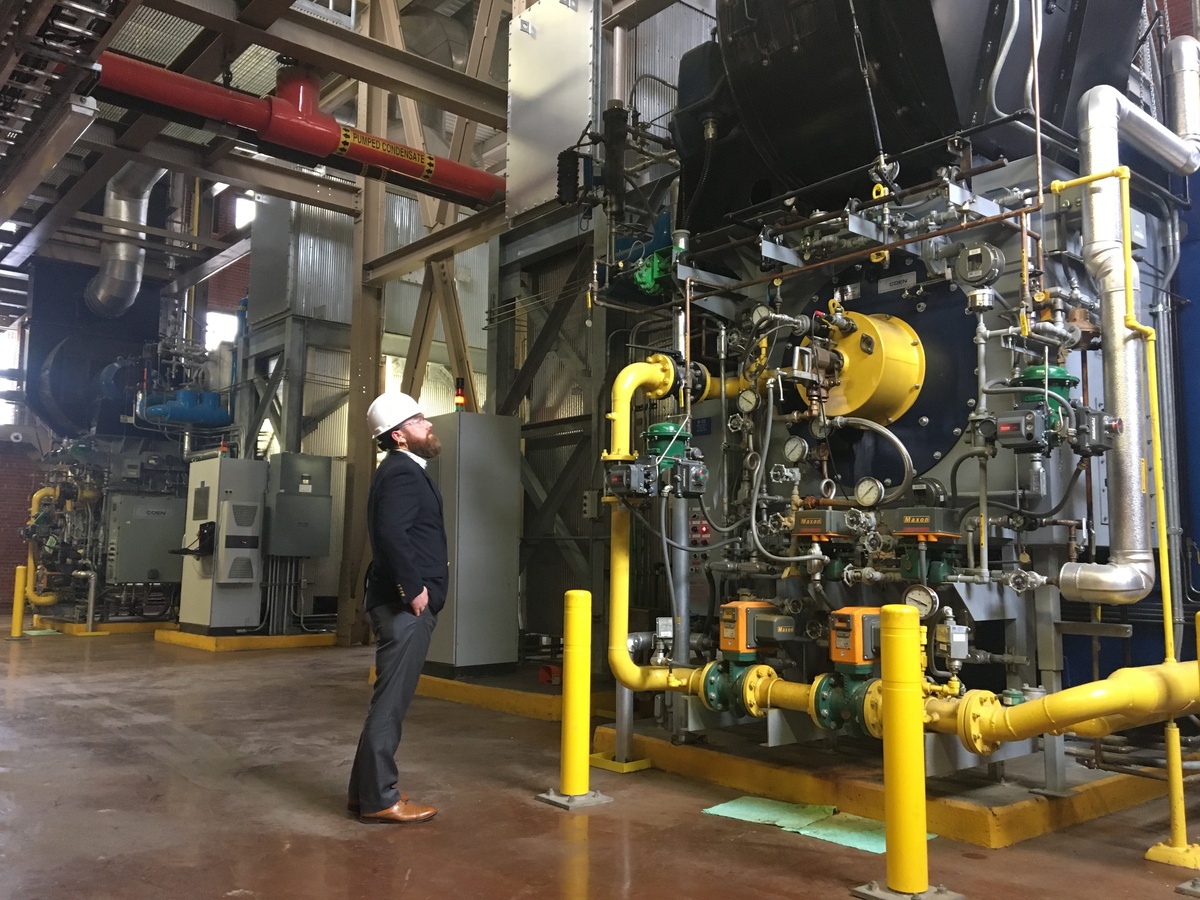 In late March, a project in eastern North Carolina revealed the potential to turn every hog farm in the state into a source of renewable natural gas, or what's known as swine biogas.

Biogas typically refers to methane created by the breakdown of organic matter. It can be made from food scraps, decomposing plants and animal waste. Swine biogas is methane that comes from hog waste.

Most people think the purpose of biogas is to create green fuel, but that's actually the byproduct. The main purpose of creating biogas is to destroy methane and earn valuable carbon offset credits — methane is a greenhouse gas that is 25 times more potent than carbon dioxide.

The Optima KV Project has the potential to do both — destroy methane and create enough renewable natural gas to power the equivalent of 1,000 homes for a year.

Currently, hog farms that make biogas also turn it into electricity onsite using a microturbine — think of a gasoline generator. This means a hog farmer oversees every step of the process.

The Optima KV Project does for swine biogas what Henry Ford did for the auto industry. It streamlines production by getting rid of individual microturbines at each farm. Instead, it funnels the biogas from five Duplin County hog farms into a pipeline that feeds into a nearby Duke Energy power plant. This is what's known in the industry as "directed biogas."

"I just think that makes a lot more sense," said Randy Wheeless, a spokesman for Duke Energy. "That's because the process of turning the gas into electricity will happen at a major power plant with higher efficiency and better emission controls."

Duke Energy is purchasing the Optima project's swine biogas to meet a state-required mandate that 0.2 percent of energy come from hog waste by 2023. This project is getting the state close to meeting that mandate for the first time.

Another biowaste production facility, the Carbon Cycle Project, was slated to come online this summer, but people familiar with the company say it's been delayed. The Denver-based company, Carbon Cycle Energy, expects its project in Duplin County will produce enough electricity to power 32,000 homes annually. About a quarter of that energy will come from swine waste. 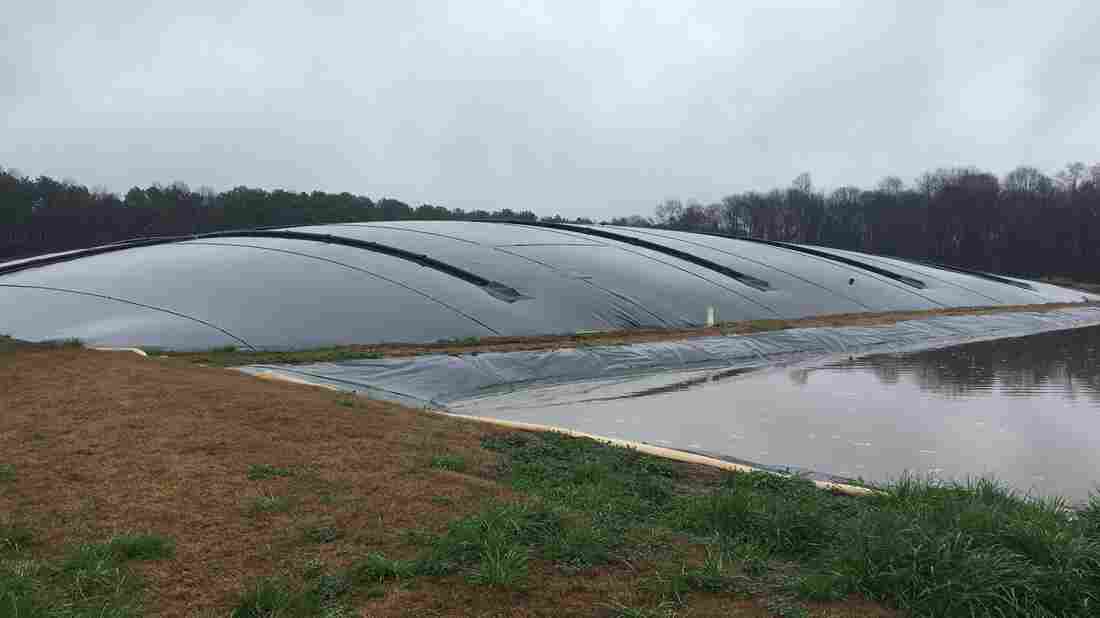 Anaerobic digestion in a hog waste lagoon at Loyd Ray Farms causes methane to build up under a cover. This methane will be converted into swine biogas. James Morrison/WUNC hide caption 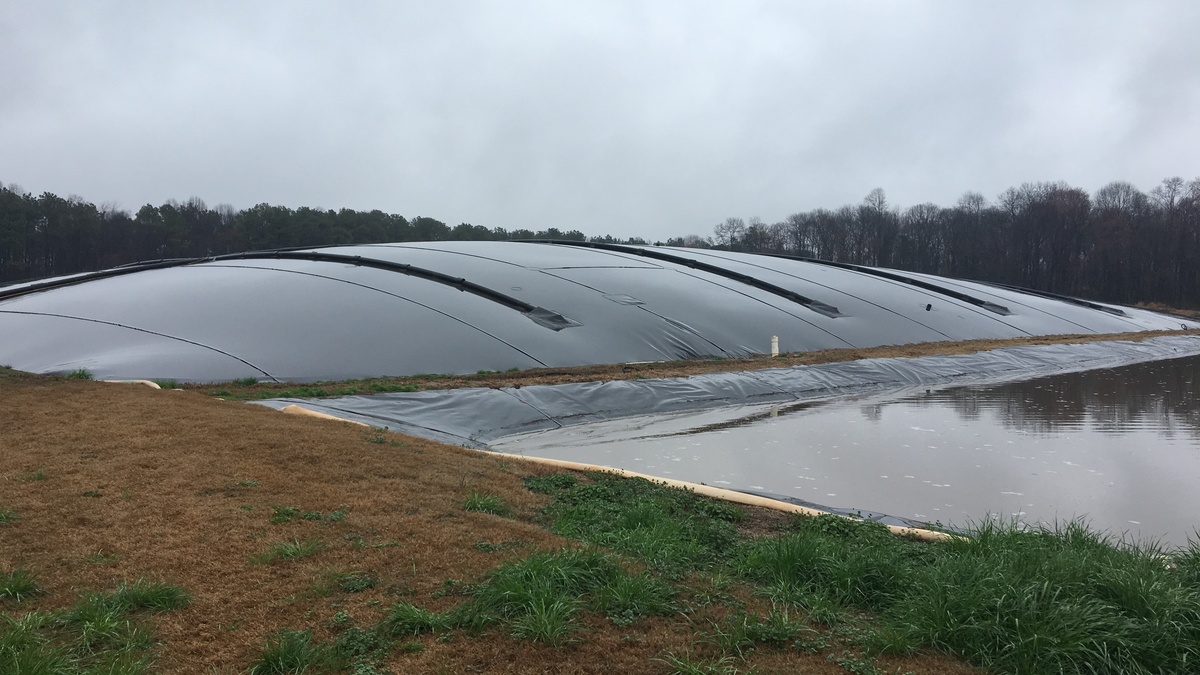 Anaerobic digestion in a hog waste lagoon at Loyd Ray Farms causes methane to build up under a cover. This methane will be converted into swine biogas.

A 2013 Duke University study found the directed biogas approach could lower the cost of swine biogas to as little as 5 cents a kilowatt hour, which is roughly the same price as solar power.

And there's a reason Duke University is interested in lowering the price of renewable natural gas. It has a goal of bringing all its emissions to zero by 2024. And while solar and wind energy can get Duke most of the way there, it's not enough.

The university still needs a combustible fuel source to turn water into steam in its massive boiler plant. That steam creates heat for buildings on campus year-round. The plan is to convert the boilers from burning natural gas to burning swine biogas.

"That means we would be able to run the campus on a renewable energy source," said Tanja Vujic, director of biogas strategy at Duke University. "And we would get credit for destroying methane that's coming off those lagoons."

In 2010, Duke University partnered with Google to pilot a system for turning hog excrement into electricity. This system is still running at Loyd Ray Farm in Yadkinville, hundreds of miles west of where most of the state's hogs live.

The purpose of the system was for Duke and Google to earn carbon credits to offset their carbon footprint as they transition to more renewable energy sources. The two could have gotten credits for capturing the methane and burning it (known as flaring), but Duke saw potential for swine biogas in a state with roughly 9 million hogs — each producing 10 times as much waste as a human.

Creating biogas from hog waste is a relatively simple concept. On any hog farm, water is used to flush waste out of the barns into a lagoon. Bacteria eats that poop and creates methane. Instead of letting that methane bubble into the atmosphere and add to climate change, you can capture it by covering the lagoon with what looks like a giant pool cover.

"A big storage balloon is what it amounts to," said Marvin Cavanaugh, owner of the Winston-Salem-based engineering firm Cavanaugh. Duke hired the firm to develop the pilot project at Loyd Ray and test the potential for scaling swine biogas to an industrial level. 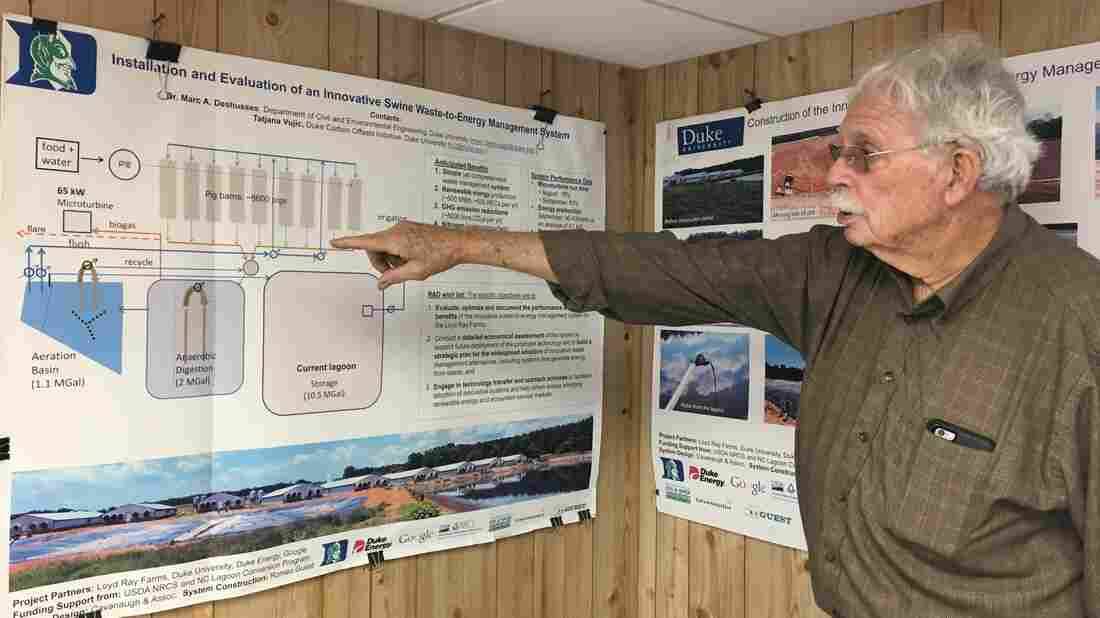 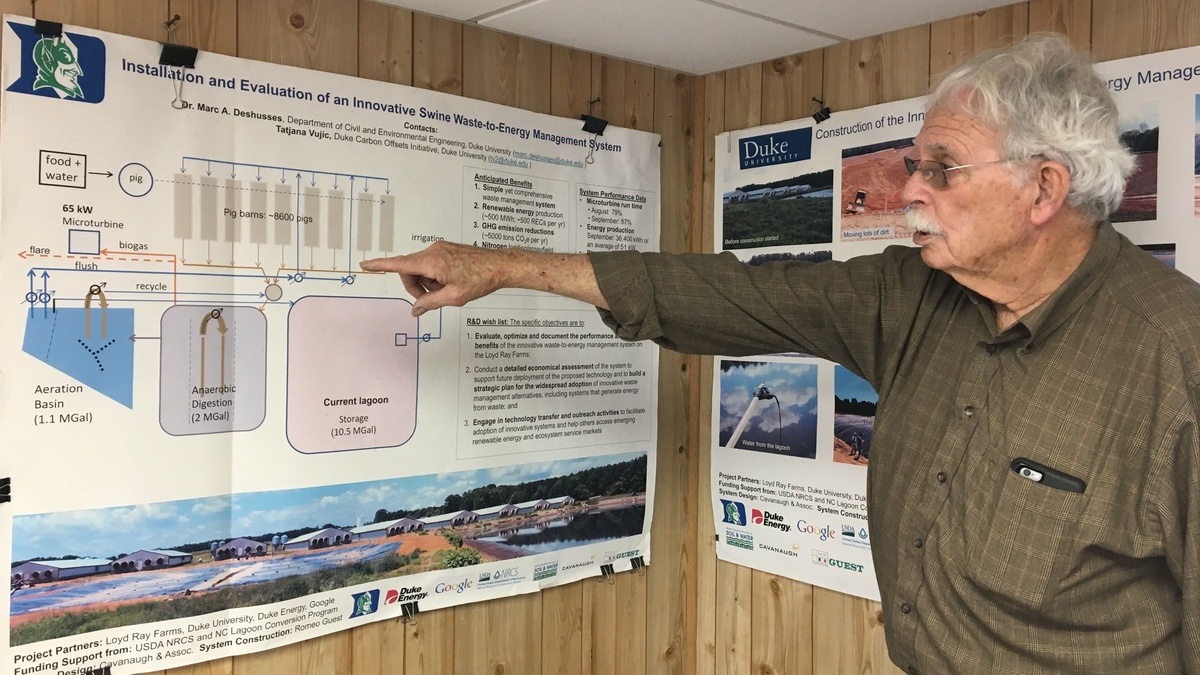 At Loyd Ray, Cavanaugh also uses a giant pump at the bottom of the lagoon to circulate the liquid waste. This ensures air, bacteria and pig poop are all maintained at the right balance.

"It's pretty similar to a compost pile," Cavanaugh said. "You have to maintain the right mix and temperature."

The resulting methane is then cleaned and turned into pressurized natural gas that can be turned into electricity. This fuel is highly versatile and can be used in myriad ways. Some farmers use it to run diesel generators.

"We had two teams from China come. I asked what they were gonna do with it," Cavanaugh said. "He said 'We're gonna bottle it and burn it in our cars.' I said 'It's not cost effective.' He said, 'Maybe not for you, what you pay for gas. But what we pay for gas, it's very effective.'"

Over the past seven years, the project at Loyd Ray Farms has taught Cavanaugh and Duke University how to scale the production process and squeeze more gas from each hog farm, as they eye the vast untapped waste lagoons in the eastern part of the state.

The Optima KV pipeline is a major breakthrough in the application of what has been learned at Loyd Ray.

The future of biogas in North Carolina

Moving forward, Duke researchers are hoping the university's role as a large, stable purchaser of biogas will be the catalyst for creating a stable market for the green fuel. They estimate it could drive as many as 300 hog farmers into producing biogas by creating steady demand for the fuel.

How Colorado Is Turning Food Waste Into Electricity

Duke University's Vujic envisions a time in the near future when all hog farms in the state will be connected to a renewable natural gas pipeline, curbing emissions and making us less dependent on fossil fuels.

It shouldn't stop with hog waste, she said. Biogas can be made from food scraps, chicken poop and even human waste.

"Once we develop the infrastructure for a biogas market in North Carolina, you're going to see those other sectors find ways to make biogas as well, Vujic said. "It's kind of like Field of Dreams. If you build it they will come."

This story comes to us from member station WUNC in North Carolina. James Morrison is an environment and food writer in Chapel Hill, N.C. You can follow him on Twitter at @JCMorrisn.