Accessibility links
Antarctic Veggies: Practice For Growing Plants On Other Planets : The Salt We may cultivate crops in space one day, so scientists are running an Antarctic greenhouse to prepare. They've harvested the first crop, but like any space mission, it's a bit tricky.

Antarctic Veggies: Practice For Growing Plants On Other Planets

Antarctic Veggies: Practice For Growing Plants On Other Planets 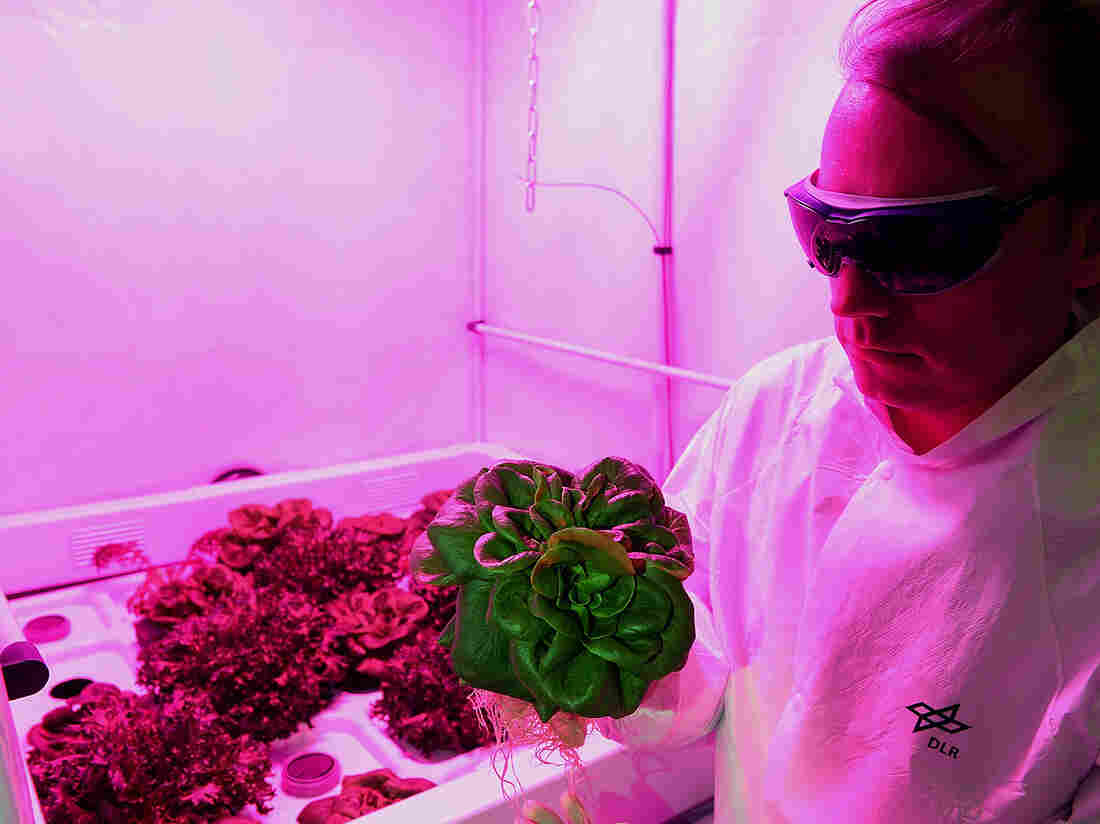 Engineer Daniel Schubert inspects lettuce at the German Aerospace Center in Bremen. Scientists there are developing greenhouses for a potential Mars colony. The first greenhouse is being tested in an inhospitable environment in the Antarctic. David Hecker/Getty Images hide caption 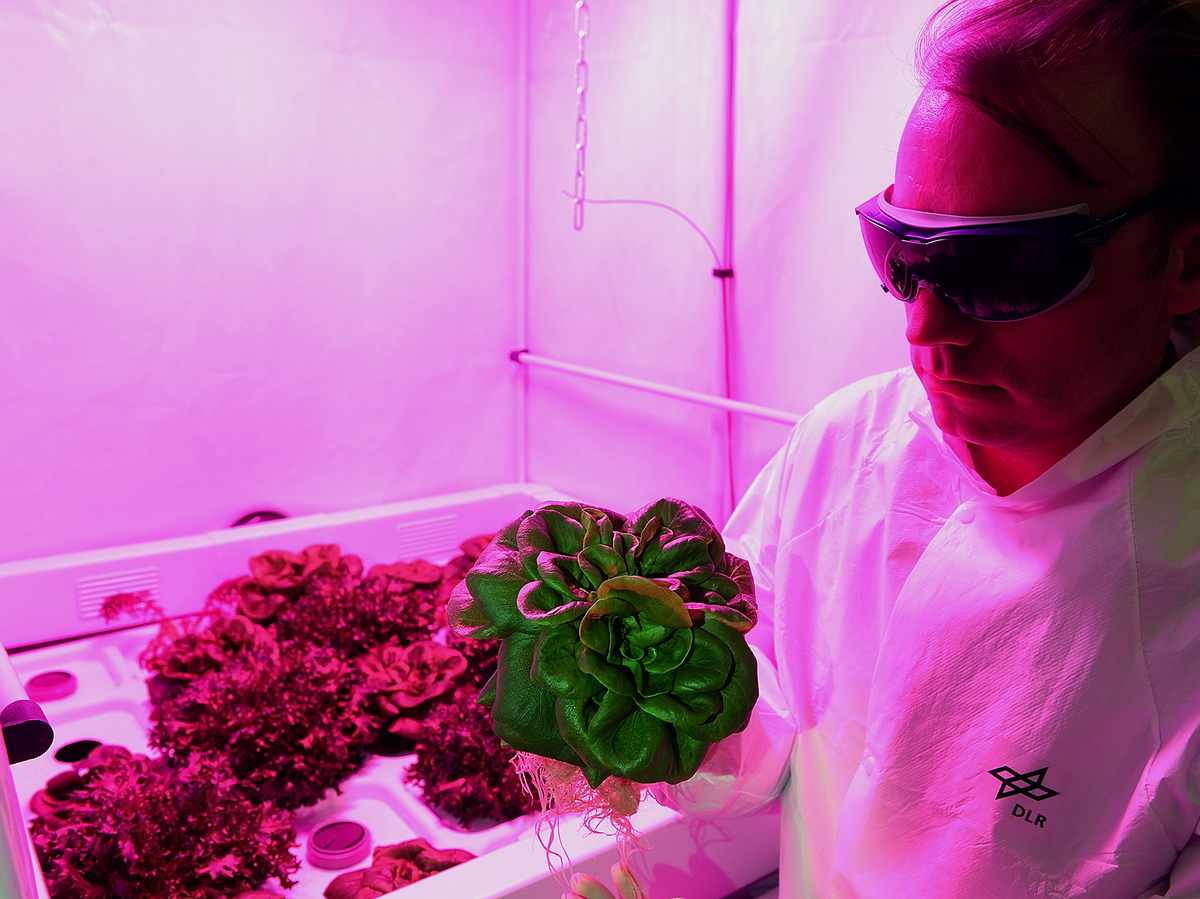 Engineer Daniel Schubert inspects lettuce at the German Aerospace Center in Bremen. Scientists there are developing greenhouses for a potential Mars colony. The first greenhouse is being tested in an inhospitable environment in the Antarctic.

Last Christmas, Matthew Bamsey was in Antarctica with a giant item on his wish list.

As a systems engineer at the German Aerospace Center, Bamsey was hoping the greenhouse he had helped design would arrive at Neumayer Station III, Antarctica, around Dec. 25. His gift was a bit late — icy weather delayed the greenhouse's arrival until Jan. 3, but he didn't mind. After three years of preparation, it was fine that it got there eventually.

And while growing greens in Antarctica is exciting — for much of the year there's no fresh produce at Neumayer Station III — Bamsey says the end goal of this project is much farther away. EDEN ISS is a practice round for cultivating food in space.

Ferl says having more, well, space, is part of what sets the Antarctic greenhouse apart from the experiments on the International Space Station. Plants aboard the ISS grow in an area smaller than one square meter, Ferl says. The roomier EDEN ISS has 13 square meters available for plants.

Think You're Cold And Hungry? Try Eating In Antarctica

With all that extra room, hopefully, EDEN ISS will clarify how to expand space farming beyond orbits, onto other planets, says Anna-Lisa Paul, who is also a space biologist at the University of Florida. Learning how to set up and operate a greenhouse in Antarctica, the researchers say, should be good preparation for eventually sending a similar system to Mars or the Moon.

So from its start, EDEN ISS has been pretty similar to a space mission, says Bamsey, who made Canada's short list for astronaut candidates in 2017. When the greenhouse left Bremen, Germany, it had a strict launch date, just like a rocket. The ship that carried the greenhouse only travels to Neumayer Station III once each year.

The ice of Antarctica isn't exactly like the vacuum of space — "Antarctica has gravity, and space does not," Paul says, "but both environments are isolated, both are a challenge logistically." The difficulty of transporting something to Antarctica is a pretty good model for a voyage to the Moon or Mars, she adds.

From the ocean, tracked vehicles pulled the components of the greenhouse structure — two 20-foot shipping containers — on sleds for 12 miles. The structure rests about a meter above the ice so that snow accumulation doesn't close it off; for every year EDEN ISS remains in Antarctica, the researchers plan to raise its legs another meter, Bamsey says.

The greenhouse also traveled with another shipping container full of supplies, including around 130 gallons of water (to simulate landing on a planet with no water) — but no dirt. "Every pound that you're sending to the space station costs about $10,000," Bamsey says. Given its weight, "soil is essentially a no-no."

Instead, the plants grow in air. Misters spray plants' roots with water and nutrients, and LEDs provide the light they need to grow. Another misting system routinely disinfects the entire interior of the greenhouse to discourage any microbes that might take up residence.

In Antarctica, one scientist, Paul Zabel, who affectionately refers to himself on the EDEN ISS blog as "the winter hermit", tries to visit the greenhouse for a checkup every day.

Sometimes strong winds keep Zabel away for a day or two, but that's not a big deal, says Bamsey, because he and his team can monitor and control the greenhouse from afar. A few dozen webcams pointed at the plants send images back to Germany.

From Florida, Ferl and Paul are responsible for even more complex monitoring. They've modified GoPro cameras to collect data on the non-visible light reflecting from plants' leaves, using these measurements to understand how the crops are doing before any salad greens begin looking sad by eye. Their setup lets them tell Zabel, on the ground, "Listen, you might want to look at tray number 27, plant 52, because that one looks like it's getting stressed," Paul says.

Paul says space farming operations could very well rely on automation and remote control, so it's doubly important to test these systems in a place as far away as Antarctica. Bamsey agrees, adding that extra isolation will also give crews a good idea of what kind of troubleshooting a greenhouse on another planet might require. In Antarctica, he says, "when something breaks, you can't just go to the hardware store to get a replacement part."

EDEN ISS is also a test to see how much time and effort it might take astronauts to grow their own food. The project is closely tracking how long Zabel spends on greenhouse tasks like pruning and equipment maintenance.

So in terms of daily routine, Ferl says, it's good that Antarctica has similarities to space. "[At Neumayer Station III] you have to put a suit on to go outside, then you have to change from that suit to an interior suit to go into the greenhouse," Ferl says.

But maybe the only way to really understand the relationship between space and Antarctica is to visit one, or both places. Paul has never left the atmosphere, but visiting Neumayer Station III to help set up EDEN ISS made her extra certain that the ice mimicked a pristine planetary environment well.

"Antarctica is so vast and clean and cold and special," Paul says, "that it is very much like being on the surface of another planet."