Accessibility links
Edible Oddities: David Bowie-Inspired Menus Reflect His Many Personas : The Salt Ziggy Stardust and the Thin White Duke are just two of the characters David Bowie created for himself. The innovator explored music and identity, and his art exhibition inspires chefs and mixologists. 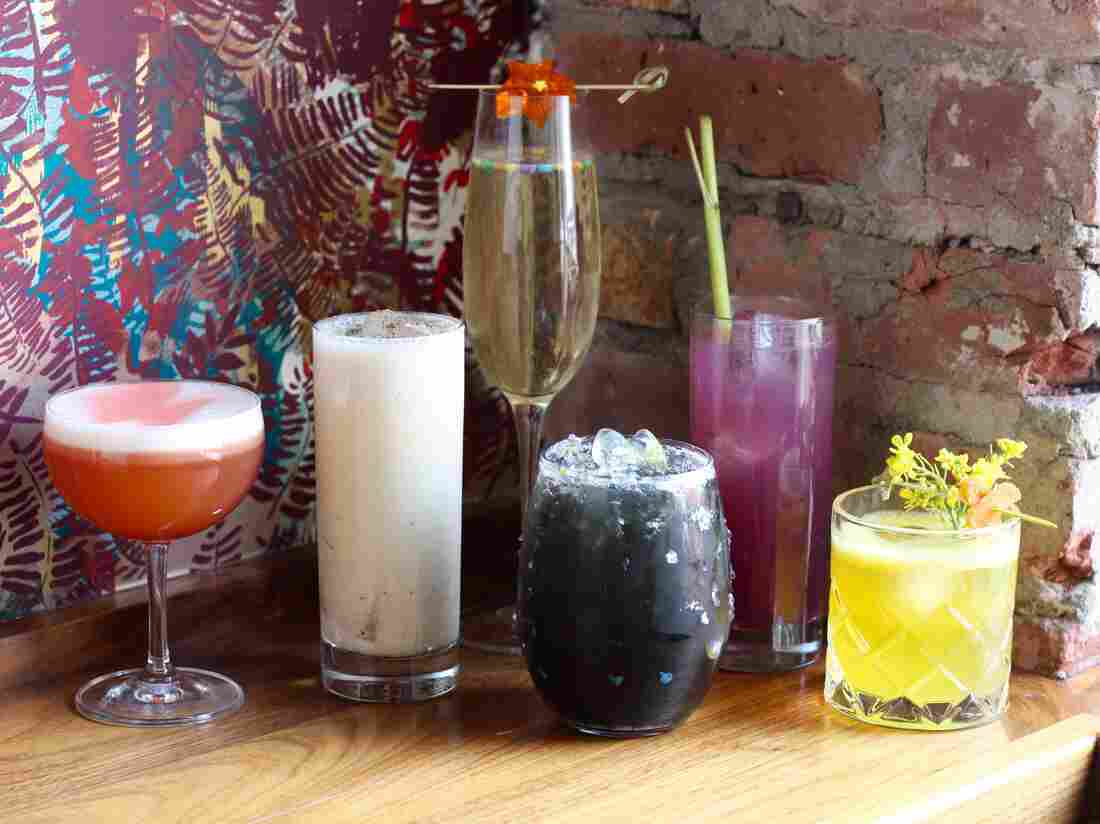 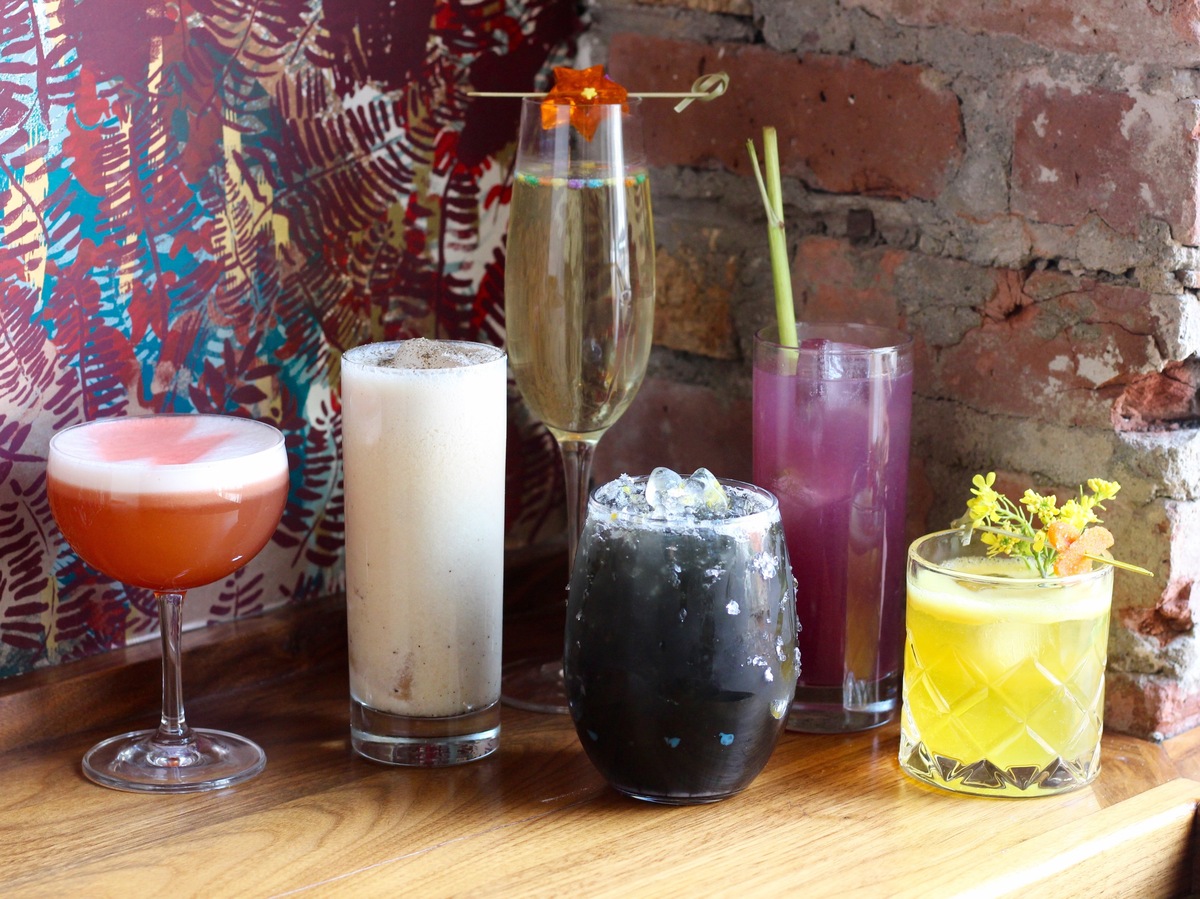 From left: Aladdin Sane, Thin White Duke, Ziggy Stardust, Major Tom, The Man Who Fell to Earth, and Halloween Jack are Bowie-inspired cocktails made by BKW by Brooklyn Winery.

Matthew Yokobosky finds food inspirational — which is perhaps not entirely surprising, considering that as an art curator, it's his job to make connections between seemingly disparate objects, just as a chef creates a cohesive dish out of contrasting ingredients.

So when New York City restaurateur and chef Saul Bolton suggested developing a themed menu and a series of dinners around the "David Bowie Is" exhibition now on view at the Brooklyn Museum, Yokobosky was intrigued.

"I was knee-deep in research for the show," says Yokobosky, who selected 100 additional items for the collection's final stop in Brooklyn. The exhibition has been traveling the world since starting its journey at the Victoria and Albert Museum in London in 2013. "I had just added a menu that Bowie drew by hand for a New Year's dinner in Berlin in 1978, so it was really perfect timing when Saul suggested the idea. And we actually know a lot about some of Bowie's favorite foods." Bowie-inspired food and drinks have popped up on menus in several cities along the world tour, including a smoked tofu and grapefruit salad — dubbed "Modern Love" — at the cafe in Chicago's Museum of Contemporary Art. Tokyo, always ahead of the curve, was creating Bowie pop-up pubs long before the artist's death in January 2016.

Visitors to the Brooklyn Museum's The Norm cafe will find a menu that offers everything from a playful "Diamond Dogfish and Chips" to shepherd's pie — which Bowie's wife, model and entrepreneur Iman, learned to make for him — to a dark chocolate cake that pays homage to Black Star, Bowie's final album that was released two days before his death. 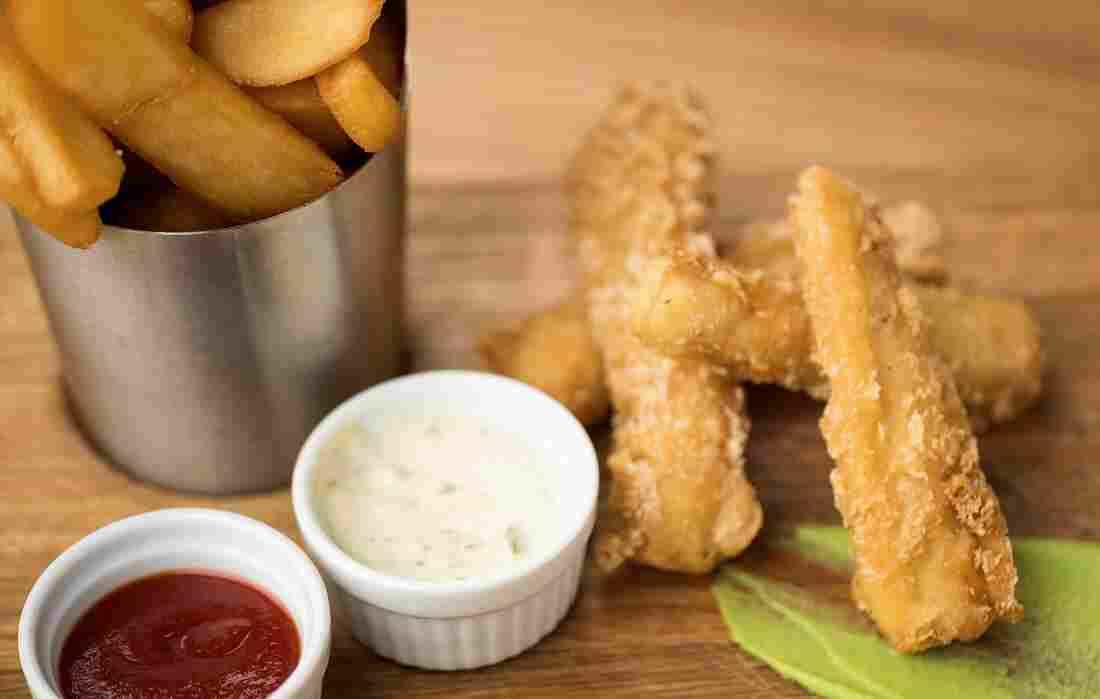 Adding a taste element to the visitor experience made sense to both Yokobosky and Bolton, because the Bowie exhibition is focused on immersing viewers in the sights and sounds of the artist's five-decade career through music, video and original costumes. There's also a seemingly endless array of handwritten notes, drawings, photographs and memorabilia drawn from some 75,000 items in the David Bowie Archive (said to be stored in a secret location somewhere in New York City). And Bolton, a self-described Bowie fan, was thrilled that Yokobosky was game.

"Usually what we try to do at The Norm is to reflect the cultural diversity of Brooklyn itself," says Bolton, a Michelin-starred chef. "But within the context of the Bowie exhibit, we were able to play into different elements, whether it's a song interpreted through food or the culinary influences of cities that were important in his life."

Besides Bowie-cizing the cafe's seasonal menu at The Norm, Bolton and Yokobosky also decided to create a series of four dinners between April and July this year that would allow for a deeper dive into Bowie's life and art, using food as a vehicle.

For inspiration, Bolton turned to four cities that had a major impact on Bowie's career: London, Bowie's birthplace and where he began his journey as a multidimensional artist; Berlin, where Bowie took sanctuary to kick a drug habit and ended up producing three of his most innovative albums (Low, Heroes and Lodger); Philadelphia, where Bowie recorded the hit "Young Americans" with a young Luther Vandross; and Tokyo, where Bowie traveled early in his career, forming longtime collaborations with Japanese fashion designer Kansai Yamamoto and photographer Masayoshi Sukita (whose photographs are currently featured at The Norm) .

"I'm going to give a 15-minute overview at the start of the dinner and talk a bit about the city that the guests are going to eat food from," says Yokobosky. "I'm hoping that it's like a moment of transportation to another place for a while. So you'll be thinking about Berlin in the 1970s, sitting in a cafe with Iggy Pop, eating this delicious food, and getting a glimpse into that experience." 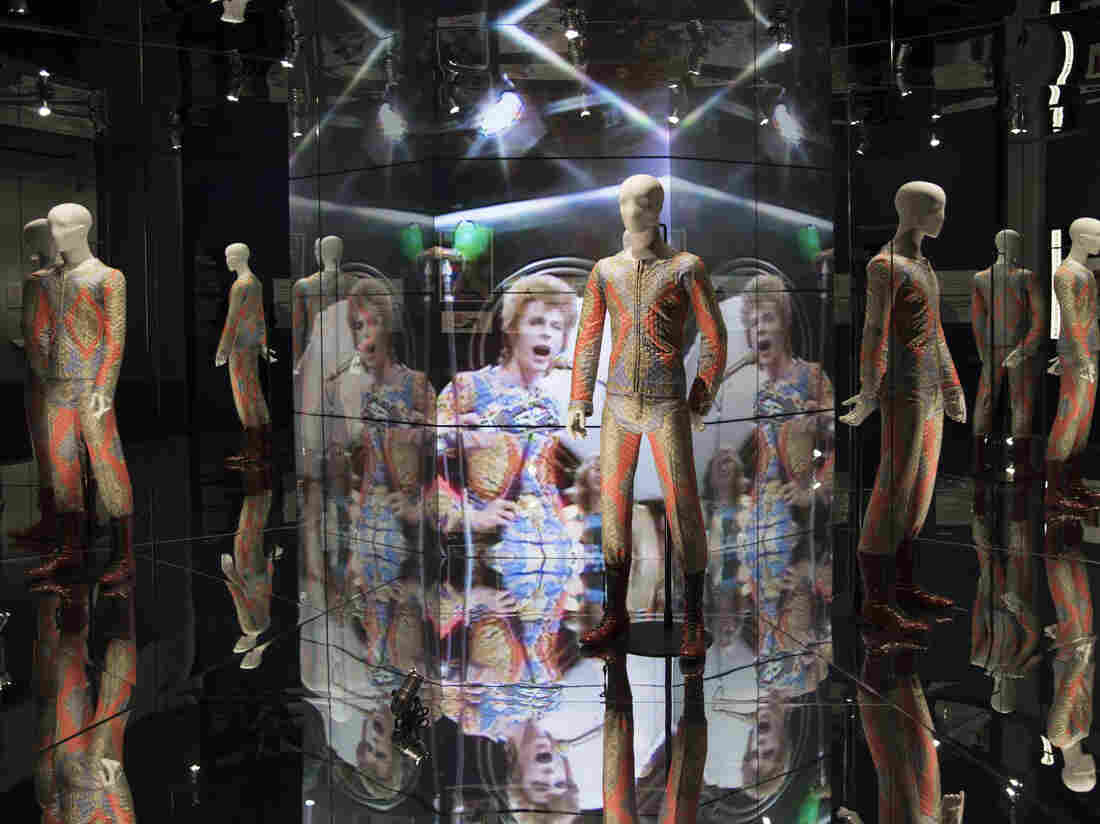 Currywurst and spaetzle with fried onions will be on the menu for Berlin, while Bolton was influenced by London's Caribbean community to create a West Indian conch salad. For Philadelphia, Bolton simply couldn't resist putting his decidedly upscale spin on a Philly cheesesteak. A Japanese Taiyaki-style fish-shape cake will be Americanized with a Twinkie-inspired filling instead of the more traditional red bean paste.

At a bar just a few blocks away, mixologists Nicole Kanev and Wesley Straton were also pretty stoked to collaborate with the museum on creating a series of cocktails for the spring menu at BKW by Brooklyn Winery. Deciding where to start, however, wasn't all that easy, says BKW General Manager Adam Cornelius: "The biggest challenge was figuring out what to base the cocktails on, because David Bowie was so prolific in so many ways. In the end, the obvious answer was to focus on the personas that he created — Ziggy Stardust, the Thin White Duke, Major Tom. Then we spent four months reading every interview we could find and watching documentaries looking for inspiration."

Says Kanev, "When we create cocktails, we almost always come up with the recipe first and then name the cocktails. This time we started with a name and worked backwards to figure out the flavors."

While it's easy to focus on the fun garnishes that help give the seven cocktails undeniable Bowie appeal — such as the lightning bolt stenciled onto the egg-white-foam topping on the Aperol-laced Aladdin Sane cocktail — it's the ingredients inside the glass that tell the real story.

The Jareth The Goblin King cocktail, for instance, seems to be a simple riff off a classic martini at first glance but reveals hidden depths upon closer examination. Kanev and Straton focused on two elements from Labyrinth, the 1986 film in which Bowie plays the menacing, yet lovelorn, monarch: peaches (used to drug innocent protagonist Sarah) and crystal orbs (used by Jareth to create illusions and show dreams).

"Wesley wanted to do a clear drink," says Kanev, "and peach is prominent in the movie, so we wanted that in there as well. But peach can be cloying — we didn't want something that tasted like a peach Bellini."

A fruit-forward Spanish barrel-aged gin, combined with a dry English gin and Blanc vermouth, needed just a touch of peach bitters to mimic the film's subtle undertone of unrequited love.

Bowie's reported cocaine-fueled diet of red peppers and milk in the mid-'70s inspired the Thin White Duke, a spin on milk punch made with brandy, chile liqueur and black pepper honey. Kanev and Straton created a variation on the French 75 for the Ziggy Stardust, going to the trouble to make clarified lemon juice so that the wine-based drink would sparkle brightly in the flute without any cloudy residue.

"We knew we'd have a lot of diehard Bowie fans here," Kanev says, "so we had to get it right."