Accessibility links
DNA Analysis Of Ancient Excrement Reveals The Diets Of Centuries Past : The Salt Researchers are exhuming ancient dung from toilets of yore to reconstruct snapshots of food and lifestyle in bygone centuries. The parasites that show up in privies reveal a lot about what people ate. 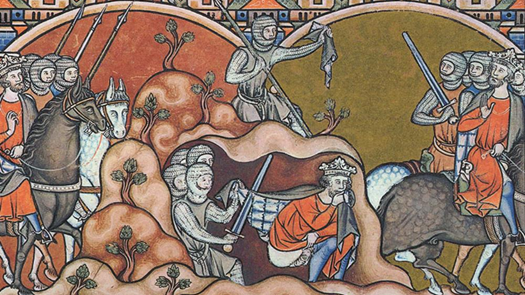 An illustration from the Maciejowski Bible (also called the Morgan or Crusader Bible) circa 1250, called "David Spares Saul In the Cave." The Pierpont Morgan Library hide caption

When it comes to the nitty, gritty details, life in antiquity was pretty stinky – in a literal sense. Without high food and personal hygienic standards, most people probably contracted an intestinal worm at some point or another, says veterinary scientist Martin Søe. "I think it's fair to say it was very, very common. In places with low hygienic standards, you still have a lot of whipworm and round worm."

That also means lots of parasitic eggs dumped into latrines through the years. In a scientist like Søe's eyes, that's a historical record of what people ate and what ailed their guts. So he and his colleagues at the University of Copenhagen and Aarhus University began exhuming ancient excrement from toilets of yore to reconstruct snapshots of food and health in bygone centuries.

Most of the samples came from the early 11th century to the 18th century in northern Europe – present-day Denmark, Netherlands and Lithuania. "For the oldest ones it looks like high organic soil you might find anywhere," Søe says of the samples that are old enough to have fully decomposed. Waste that is only a few centuries old has maintained a more recognizable form. "The 400-year-old [samples], some of those you can easily see that there is human feces in parts of it. Some of it even smells a little."

By filtering the samples through fine meshes, the researchers were able to easily collect parasite eggs for a DNA analysis. "When you filter and wash these samples, you also still get the DNA of plants and animals, like fish or whale, in the samples," Søe says. The team sequenced all of the genetic material they found and began identifying plants, animals and parasites by comparing the sequences they found to those in a database of known genomes. They report the findings in PLOS ONE on Wednesday.

Søe says he can infer what people were eating from some of the parasites that show up in the privies. "[For example,] we see that [Northern Europeans] ate a lot of fish because they were eating fish tapeworms," he says.

In Danish latrines from 1600, Søe detected tapeworm eggs that can only be contracted from eating raw or under-cooked pork – though not beef tapeworms, suggesting cow meat may have been more thoroughly cooked. Alongside pork and fish tapeworms, Søe say they also found the DNA of fin whales in Danish latrines from the Viking age. "So they were hunting or maybe collecting the whale meat," he says.

The team's data also reveal some other curious things about life in the past. The waste they examined included DNA from cats, horses and rats – as well as the eggs of intestinal worms that survive solely in some of these animals. "Whipworms excreted from mouse feces were mixed up in the samples, too," Søe says. That means it wasn't just the human denizens of medieval and colonial-era Europe who were riddled with parasites centuries ago – plenty of four-legged residents had diarrhea, too. Presumably the animal excrements were swept up and tossed into the toilet by humans.

The paper provides a detailed picture of which parasites infected people during the study period, says Piers Mitchell, an archaeologist at Cambridge University who was not involved in the research. While older analyses of medieval feces have found intestinal worm eggs, this new study offers some finer detail on which parasites people had. "They found some interesting stuff. The DNA work is good. It's all [parasites] found before in the region, but the DNA shows they found pork rather than beef tapeworm [for example]," he says.

However, the study doesn't do much other than describe what was in the feces, Mitchell says. "It's hard to digest because there's so much in it," he says. "There isn't a list of simple conclusions about what they've found. It would be great if they could talk a little more about what the results tell us about life in the past or the spread of disease and migrations."

But that work is coming. The research has added to a wealth of ancient genetic data that could fuel more future analyses, says Maanasa Raghavan, a zoologist also at Cambridge who did not work on the study.

"This provides us with empirical data on what those diseases might have been in the past," she says. "Having these datasets will help us look further at how these pathogens evolved over time or how people moved around."