Accessibility links
Milk! The 'Most Over-Argued Food In History' : The Salt Author Mark Kurlansky discusses his new book Milk! with NPR's Lulu Garcia-Navarro, and the roots of modern debates on dairy. 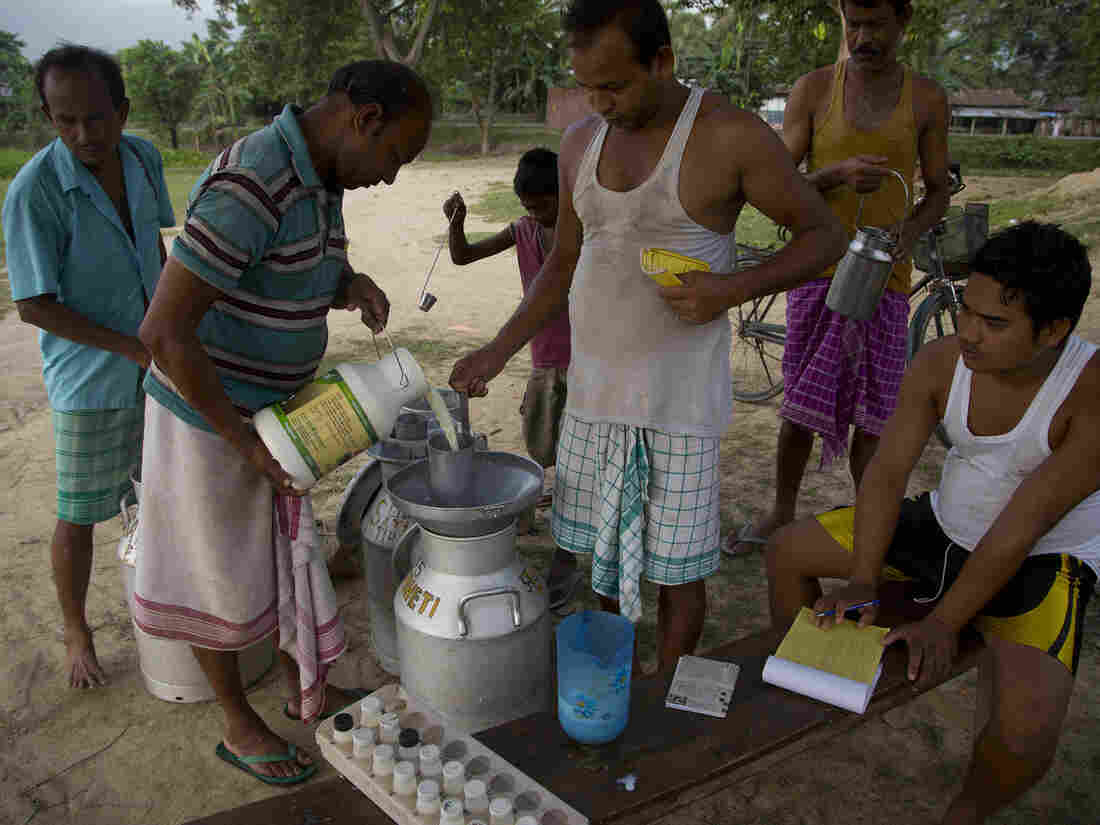 A man pours milk into a can in India's Mayong village in 2015. India is the world's largest producer and consumer of milk. Anupam Nath/AP hide caption 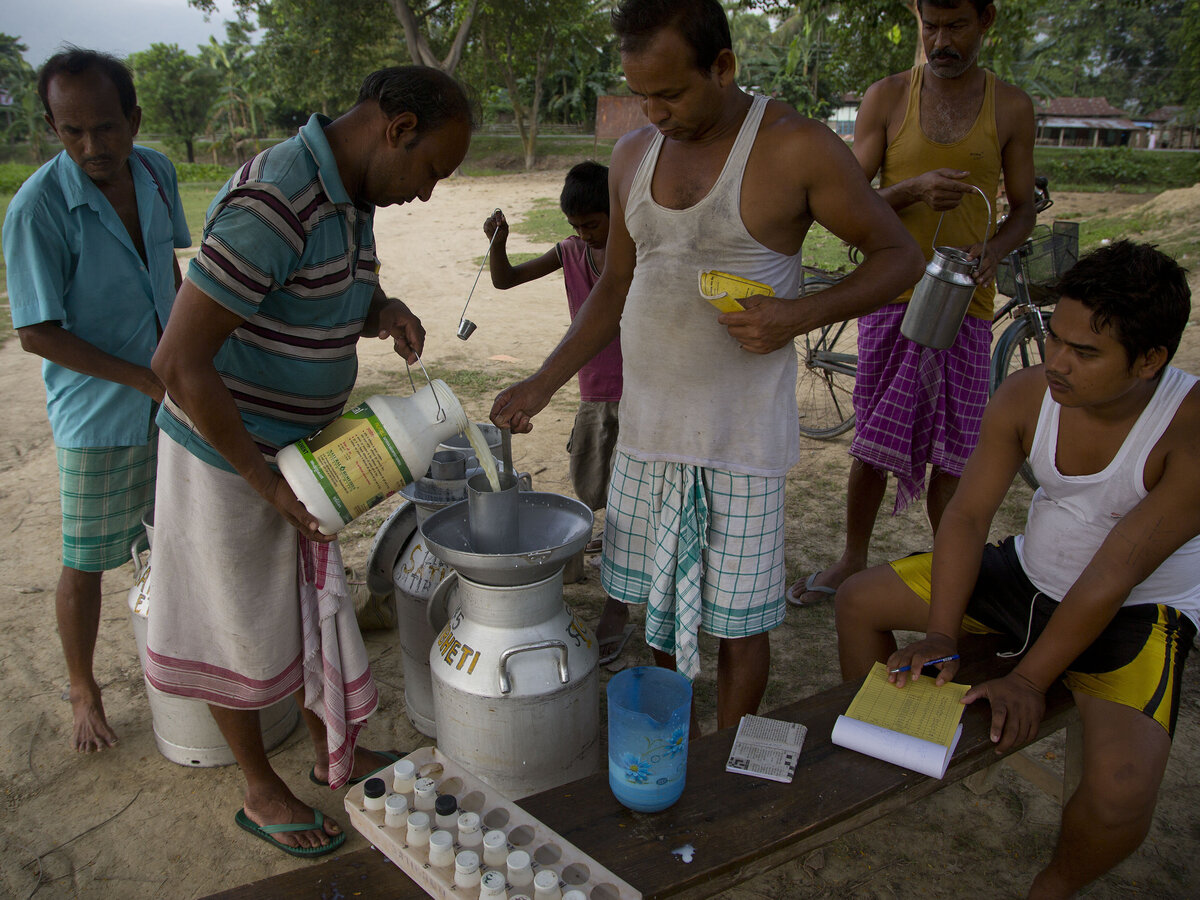 A man pours milk into a can in India's Mayong village in 2015. India is the world's largest producer and consumer of milk.

Milk is not the unassuming refrigerator staple you may have thought it was. In fact, debates about milk touch on a host of topics — cultural, genetic, medicinal, and economic — that have been going on for centuries and continue today. 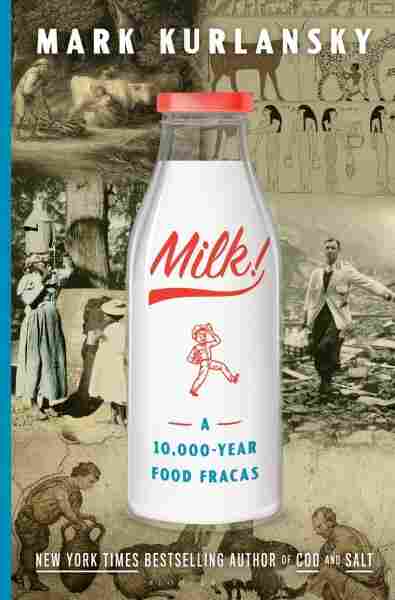 NPR's Lulu Garcia-Navarro sat down with author Mark Kurlansky to discuss his new book, Milk!: A 10,000-Year Food Fracas, and unpack some of the controversies surrounding what he calls "the most over-argued food in history."

Humans, it turns out, are unique in their preference for the dairy drink. "In nature, we aren't meant to have milk past weaning," Kurlansky says.

But because of a genetic aberration, many humans can process the sugars found in milk and dairy products well into adulthood.

And while that makes some of us unique among mammals, it doesn't mean that all humans have those genes. "It's still only something like 40 percent of the human population that can drink milk past the age of two," Kurlansky told NPR.

The genetic change is primarily found in white, northern European populations and their descendants. And although it may be Eurocentric to say that all humans can enjoy dairy in the same way, it hasn't stopped milk from becoming a global industry.

Cultures around the world consume milk from different animals and in different ways. From yak yogurt in Tibet to camel milk ice cream in Dubai, there's a lot to milk that goes beyond the gallon of 2 percent we find in our grocery stores.

"Cow milk is kind of bland, and we're kind of used to bland. So if you have sheep milk or goat milk or camel milk," Kurlansky says, "it has this other dimension of flavor, which is kind of nice if it doesn't shock you."

For most of human history, drinking milk was limited to the farm. Because it spoiled so quickly, most milk was turned into products like cheese and yogurt, which could last longer for transport and trading.

It wasn't until about mid-19th century with the advent of pasteurization and widespread refrigeration, that milk became the ubiquitous drink we think of it as today.

But milk's popularity has come with pushback. Some wonder if we are treating our milk-producing animals humanely, or if we should even be drinking milk at all.

A Peas Offering For The Dairy Aisle: Can This Milk Alternative Rival The Real Deal?

"Some people will pay more for milk if it's GMO-free, or if it's organic, or if it's animal-kind," he says, "but there's a catch: usually these things make milk much more expensive to produce."

Faced with the choice, most consumers still go with what's cheaper.

And as for whether we should even be drinking milk at all, Kurlansky says things aren't so clear. Milk can be beneficial for some — particularly those who need more calcium — but can be dangerous for others.

So next time you find yourself perusing the local dairy aisle, remember that milk goes beyond the black-and-white cows dotting American dairy farms. It's much more global — and more controversial — than you may have ever realized.