Accessibility links
Gels, Foams and Purees: Cookbooks Serve Up Recipes For Those Who Struggle To Swallow : The Salt Swallowing disorders are becoming increasingly common. Some chefs are now whipping up nutritious recipes that are not only easy on the throat, but help restore the joy of eating.

Gels, Foams and Purees: Cookbooks Serve Up Recipes For Those Who Struggle To Swallow

Gels, Foams and Purees: Cookbooks Serve Up Recipes For Those Who Struggle To Swallow 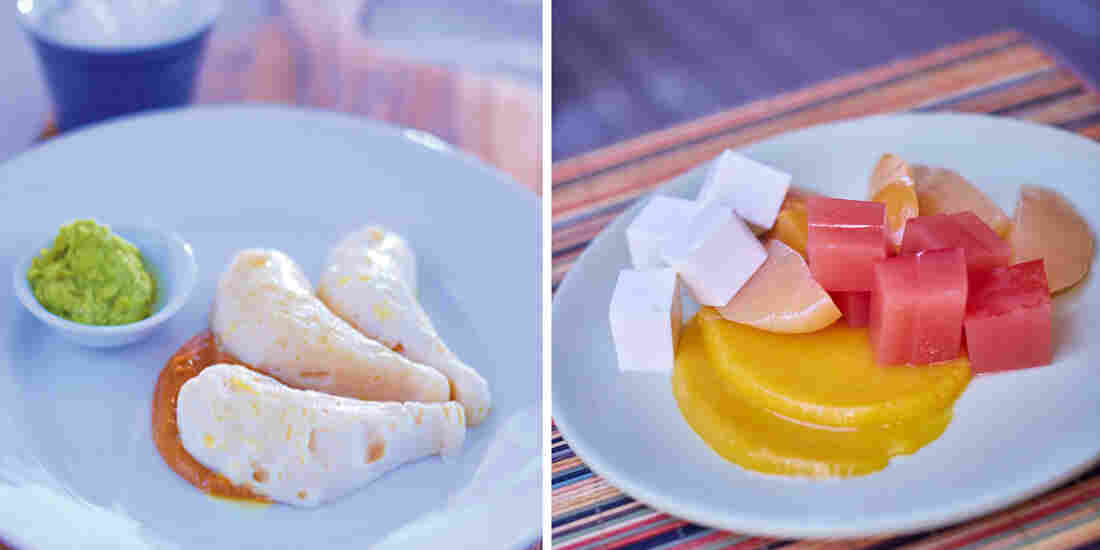 Swallowing disorders are becoming more common. Some chefs are now whipping up nutritious recipes that are not only easy on the throat, but help restore the joy of eating. Left: Pureed satay chicken with edamame, shaped into the form of a drumstick. Right: Pureed fruit and yogurt set with agar agar â Australian chef Peter Morgan-Jones calls it an ideal finger food for those with dysphagia. Matt Jewell/HammondCare hide caption 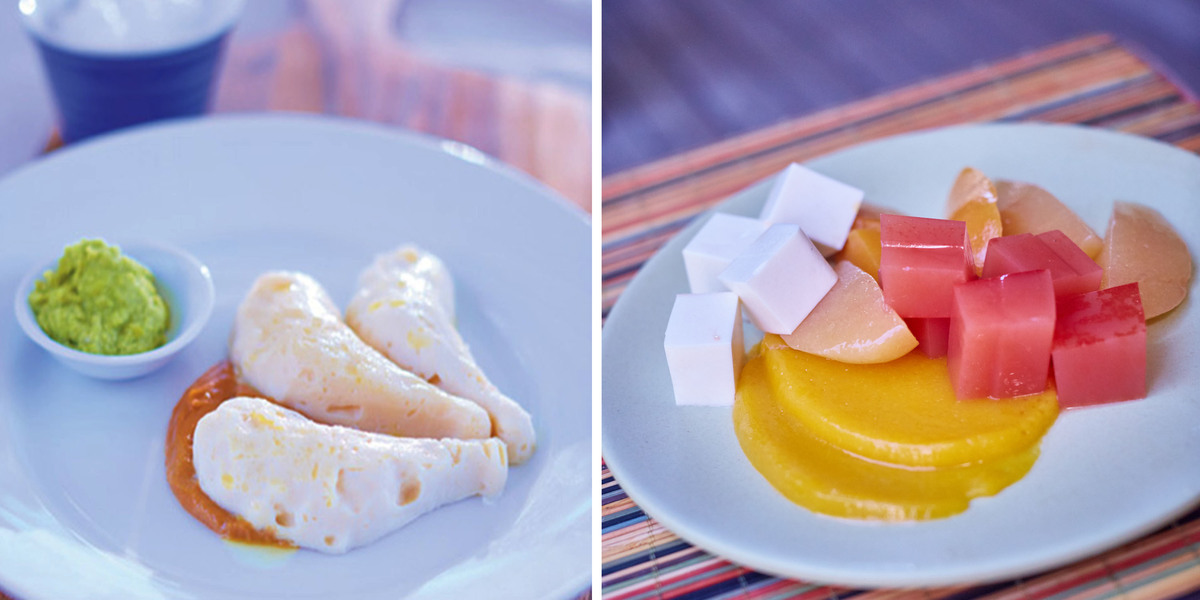 Swallowing disorders are becoming more common. Some chefs are now whipping up nutritious recipes that are not only easy on the throat, but help restore the joy of eating. Left: Pureed satay chicken with edamame, shaped into the form of a drumstick. Right: Pureed fruit and yogurt set with agar agar â Australian chef Peter Morgan-Jones calls it an ideal finger food for those with dysphagia.

In 2007 Diane Wolff, an Asian scholar about to move from California to New York City, got a call from her mother: Dementia had made it hard to take care of herself. Couldn't Diane move to Florida instead of New York? "My mother was beautiful and headstrong, and even in her old age I thought of her like Scarlett O'Hara," says Wolff. "She needed me, and I packed up and moved to Florida."

In 2010, however, her mother's dementia led to a swallowing disorder called dysphagia. When Wolff tried to source soft foods, or recipes for those with dysphagia, she came up virtually empty handed. "Commercially available pureed foods were horrible. One caregiver compared them to dog food, and I think that was being kind."

Working with dietitians and speech pathologists, Wolff — who cared for her mother until her death in 2013 — began to develop a suite of techniques and recipes for pureeing delicious, nutritious foods, from pizza to roast chicken. Today she is known as "The Queen of Puree." With 12 self-published books — including The Essential Puree: The A to Z Guidebook — a blog, and a busy schedule training caregivers and medical professionals, she is helping pioneer a new approach to an increasingly common disorder. The essence: simple, intensely flavorful food that is easy on the throat and packed with good nutrition.

Each year 1 in 25 adults experience a swallowing disorder. Dsyphagia has many causes — ranging from dementia to stroke, surgery and neurological disorders — but no matter the origin, the ability to safely consume foods is essential, according to speech pathologist David Fagen, at Fawcett Memorial Hospital in Port Charlotte, Fla. Some 60,000 dysphagia sufferers die each year, mostly from aspiration pneumonia, which is caused when food or saliva is inhaled into the lungs. Those with dysphagia can also lose interest in eating if foods are too bland or swallowing is too difficult, leading to weight loss and poor nutrition.

Wolff says there are essential tricks to a successful puree. One key is the careful application of flavor through sauces. "When you puree a food," she explains, "you increase the surface area by a factor of thousands, and you lose flavor. It tastes bland. Sauce becomes the all-important medium to carry flavor. A simple half-cup of sauce can make a puree delicious."

High-fiber foods will need to be strained after pureeing, and swapping ingredients can be essential. (A polenta pizza crust works well, whereas a traditional wheat flour crust does not). High-speed blenders are best for breaking down the cell walls of fruits and vegetables and liberating the nutrients within. Thickeners such as xanthan gum can be purchased either in gel or powder form; they allow liquids and purees to be thickened according to the patient's ability to swallow, as determined by a speech language pathologist. 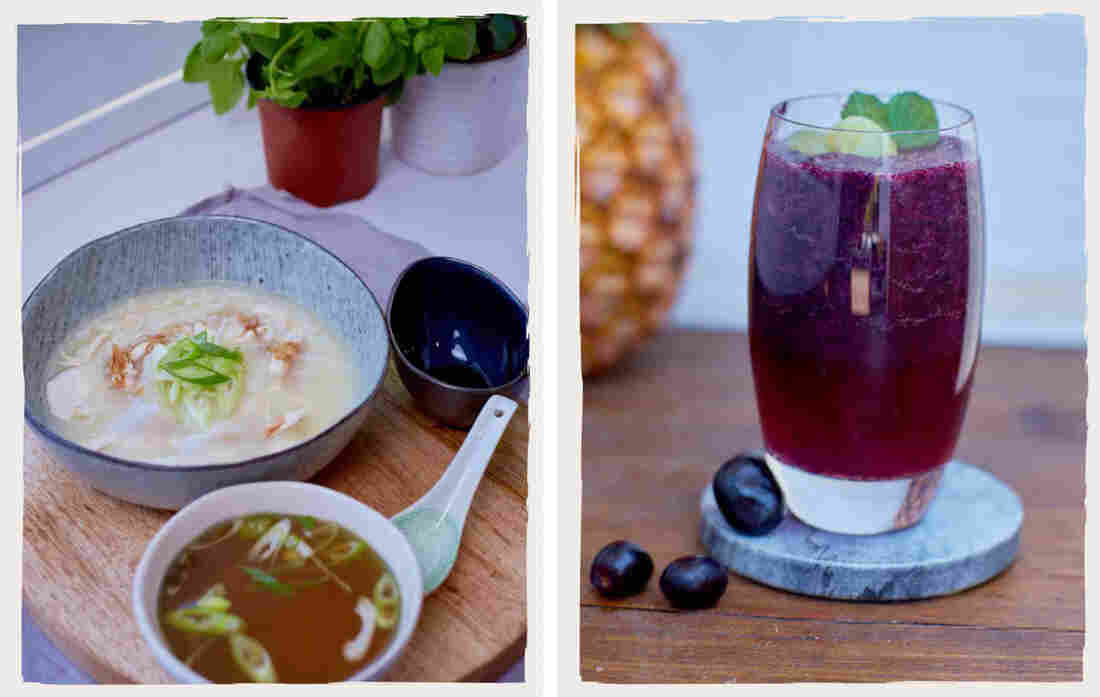 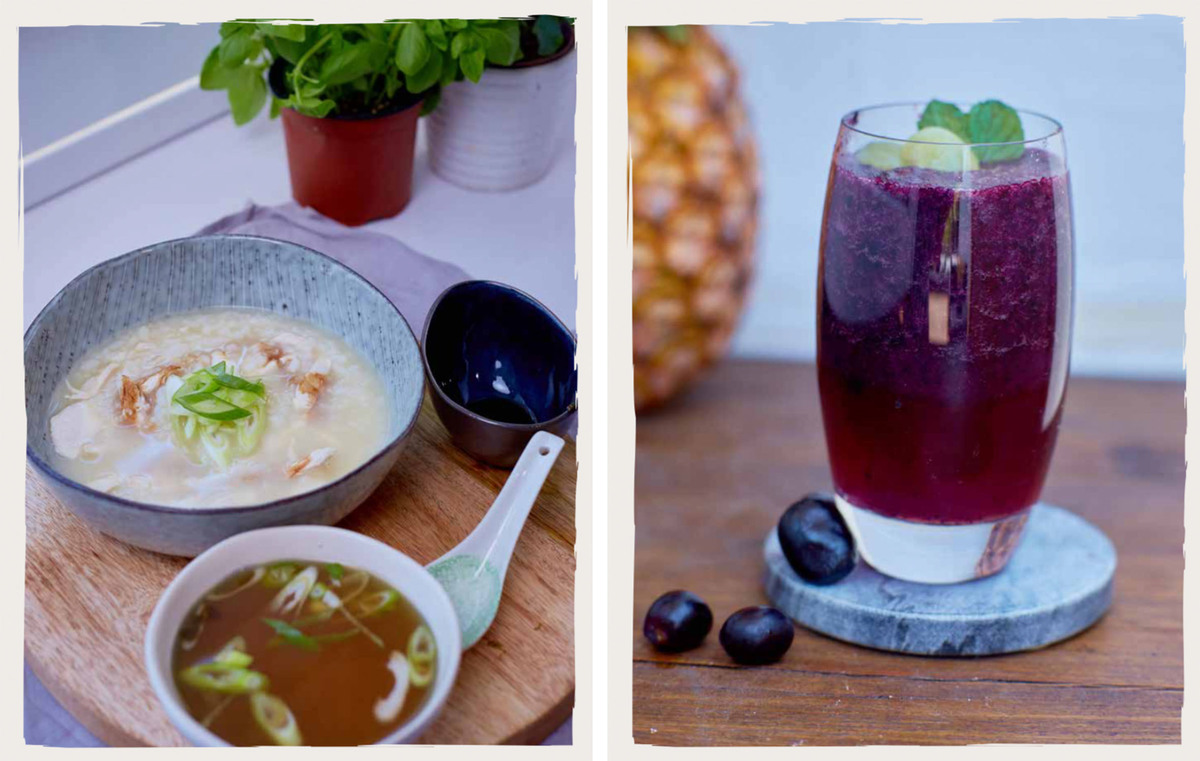 Left: shredded chicken and ginger congee. Right: a grape slushy. Both recipes come from Peter Morgan-Jones, executive chef at the HammondCare Foundation in Australia. He believes the visual impression a food makes is essential.

Another tip for caregivers: Before cooking, bring ingredients, such as vegetables and fruits, in to the patient, so they can see and smell them. Present the entire dish before it is pureed, as well. Prepare seasonal foods — the iconic dishes of summer, fall, winter and spring. "Engage all their senses during meal preparation. Just because the form of the food has changed, doesn't mean eating has to be boring and tasteless," says Wolff.

Wolff isn't the only food professional addressing dysphagia. Peter Morgan-Jones is executive chef at the HammondCare Foundation in Australia, which operates facilities for patients with dementia, aged, and palliative care needs. He has published three cookbooks for people who have trouble chewing and swallowing, or even using cutlery; his fourth — coauthored with palliative care specialist Roderick MacLeod of the University of Sydney — is forthcoming in late May. Many of his ingenious recipes draw on molecular gastronomy, utilizing whipping cream canisters to create "molecular foams" soaked in flavor but as light as air, dissolving on the tongue.

"I first tried a foam on my friend's son, who had been on a feeding tube for eight years," he explains. Morgan-Jones blended fresh strawberries and ice cream, passed them through a strainer, and added a binding agent. He then frothed the liquid into a foam. "I put the bubble on his tongue and though it was full of fragrance and flavor, it just disappeared without swallowing. His eyes lit up."

Morgan-Jones utilizes thickening agents, such as agar-agar and xanthan gum, to create gels that can be easily consumed. He offers recipes for finger food, since some individuals suffering from dementia, arthritis or neurological conditions have difficulty using cutlery. His ingenuity extends to beverages: vodka and tonic ice blocks, a jellied mulled-wine ice cube, and a jelled Scotch-on-the-rocks that can be consumed by dipping cotton swabs into the blend, freezing them and then sucking gently. "It's a new way of having a favorite tipple," he says.

Morgan-Jones believes the visual impression a food makes is essential: "If you present someone with dementia a bowl of orange mush, they won't know if it's pumpkin, carrot, or squash. But if you mold it into the shape of a carrot, or pour a puree of pear into a pear-shaped mold, it will look familiar."

Using Morgan-Jones' books, Peter Welfare, a HammondCare chef, created a chicken drumstick satay and a pureed fruit salad for a 51-year-old mother of two with early onset dementia. She was living on ice cream, custard and fruit, and was facing a possible feeding tube because of her difficulty eating. The pureed chicken was molded into the shape of drumsticks; similarly, the pureed fruit was set on yogurt and sculpted to look like the fruits themselves. "It was a smashing success. She ate it all," reports Welfare.

Individuals with swallowing difficulties are often presented with a difficult choice, says Prudence Ellis, a senior speech pathologist with HammondCare. "They can eat and drink safely but lose the pleasure of food, or they can choose quality of life with delicious meals that may trigger choking or aspiration," Ellis says.

With cookbooks dedicated to dysphagia, that impossible choice may be changing. Ellis recalls treating a passionate wine lover with dysphagia. "All he wanted for Christmas was a Shiraz, which is a popular wine made from a dark-skinned grape." By modifying Morgan-Jones' Scotch cotton swabs, Ellis was able to provide the patient a Christmas drink. "I brought him joy, instead of taking from him something he loved."