Accessibility links
Frozen Food Fan? As Sales Rise, Studies Show Frozen Produce Is As Healthy As Fresh : The Salt The uptick is new after a multi-year sales slump. Among the benefits of frozen produce: it packs as much nutrition as fresh, but with less waste if you don't eat it right away. 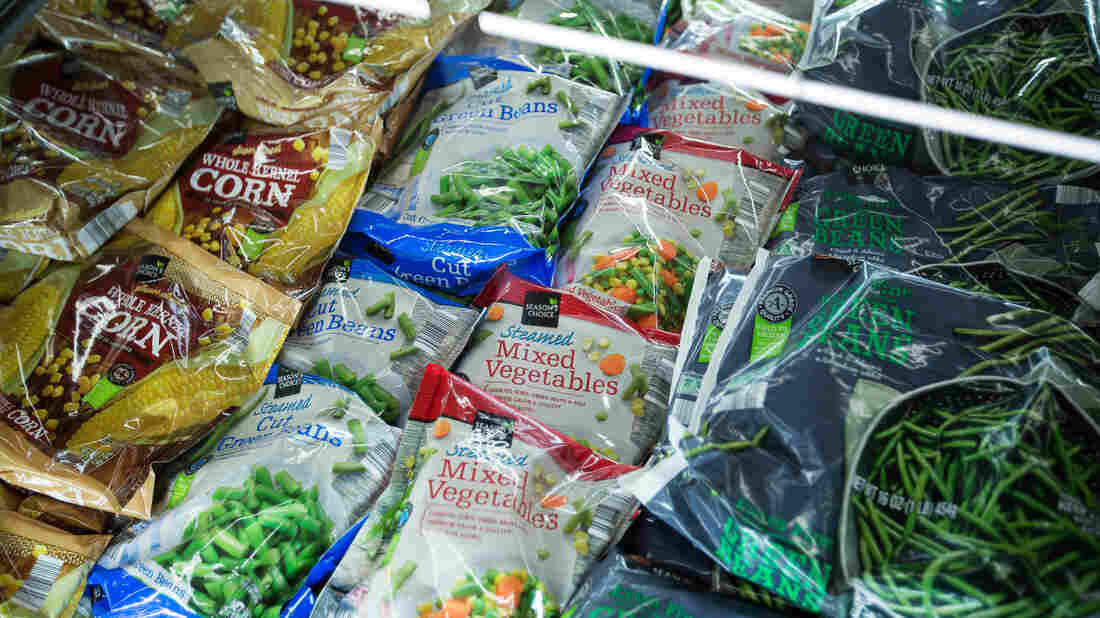 Frozen vegetables are displayed for sale at an Aldi supermarket in Hackensack, N.J. Bloomberg/Bloomberg via Getty Images hide caption 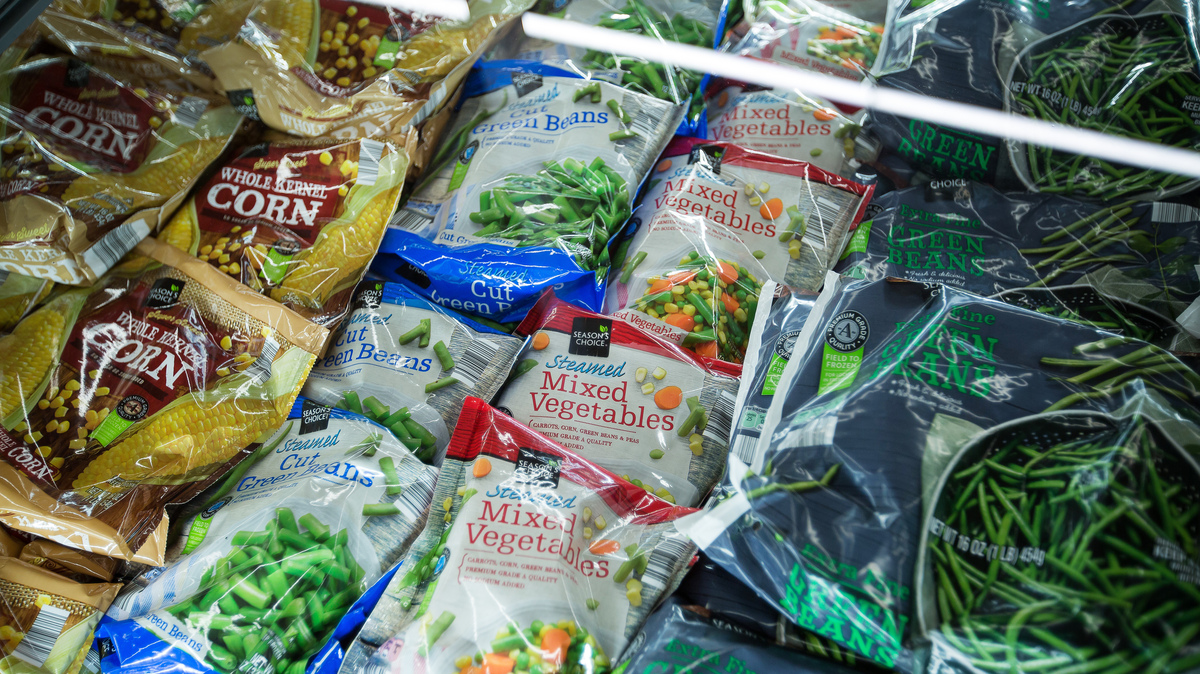 Frozen vegetables are displayed for sale at an Aldi supermarket in Hackensack, N.J.

Americans are rediscovering the coldest aisle in the supermarket.

According to a new report, sales of frozen foods, including vegetables and prepared foods, are now on the rise following a multi-year slump.

The uptick is new — and modest. But growth "is accelerating as consumers begin to see freezing as a way to preserve food with fewer negatives," concludes a report from RBC Capital Markets.

At a time when two-thirds of Americans say they want to eat more vegetables, 85 percent of consumers fail to eat the minimum recommended amount. It's "one of the widest disconnects in the world of eating," concludes the RBC report. Perhaps innovations in the frozen aisle could help narrow this divide.

Frozen produce already has several factors going for it: "its affordability and its convenience," says Phil Lempert, editor of Supermarketguru.com. And given that the typical American family tosses out $1,500 worth of food yearly — normally after it goes bad in the fridge — frozen foods, which have a much longer shelf life, could help cut back on waste. "People are more concerned about waste than ever before," Lempert says.

Big food companies are offering up new options in the frozen aisle. The RBC report points to the development of products such as veggie tots, an alternative to carbohydrate-heavy tater tots, and veggie rice, which is seen as a healthier alternative to white rice, which is a refined starch that can spike blood sugar.

Pinnacle Foods, which owns Birds Eye, has launched new pastas made from vegetables. And Green Giant, owned by B&G Foods, has introduced Veggie Spirals, made from beets, butternut squash, zucchini and carrots. Options like these may help "increase vegetable eating occasions" — and help maintain the growth momentum for frozen foods, the report concludes.

But, there are still headwinds facing the frozen food sector. Many Americans have heard the message that fresh is best. And the texture of frozen vegetables turns some people off.

"Fresh and local is what they say tends to be healthier," shopper Olivia Mitchell told me as she shopped the aisles of a Trader Joe's with her baby in tow. Mitchell says she prefers to buy fresh produce, and she recently joined a CSA, so she's looking forward to deliveries of local produce this summer.

However, with two kids and a busy schedule, Mitchell acknowledges the convenience of frozen food. "I buy frozen peas and okra," she says. She also buys frozen entrees that her husband takes for lunch.

As for the assumption that fresh is healthiest, it turns out that frozen produce can pack a punch when it comes to nutrition.

When you freeze fruits and vegetables, it locks in nutrients, and several studies have shown that this helps retain high levels of vitamins.

"You can store them in the freezer for a year and the nutrient level pretty much stays the same," says plant scientist Hazel MacTavish-West, who is a food industry consultant.

She says many factors influence the nutritional content of fruits and vegetables, but frozen produce tends to hold up pretty well.

Food scientists at the University of California, Davis, designed a study to compare the nutritional value of fresh and frozen produce. They measured the nutrients in samples of eight different kinds of fresh and frozen fruits and vegetables — including carrots, broccoli, spinach, peas and berries.

"We were quite surprised to find there were no significant differences," says study author Diane Barrett, an emerita professor in the Department of Food Science & Technology at UC Davis.

That study was funded by the Frozen Food Foundation, part of the American Frozen Food Institute. However, Barrett says the foundation did not dictate any of the parameters of the study. "I designed the study, determined which analytical procedures to use, and interpreted the results," Barrett explains.

Barrett says frozen produce does lose some nutrients during processing, when it's blanched or steamed. But she says part of the reason the nutrition holds up well in frozen fruits and vegetables can be explained by how quickly it's frozen after harvest. "Typically, the freezing facilities are very close to where the vegetables are grown, so within hours, [the vegetables] are frozen," she says.