Accessibility links
Why The $#%& Can't He Wash The Dishes?! The Chores That Can Sink A Relationship : The Salt A study finds that washing dishes is a big deal for women when it comes to the division of labor. But it taps into an even bigger idea — that women are emotionally exhausted by household management. 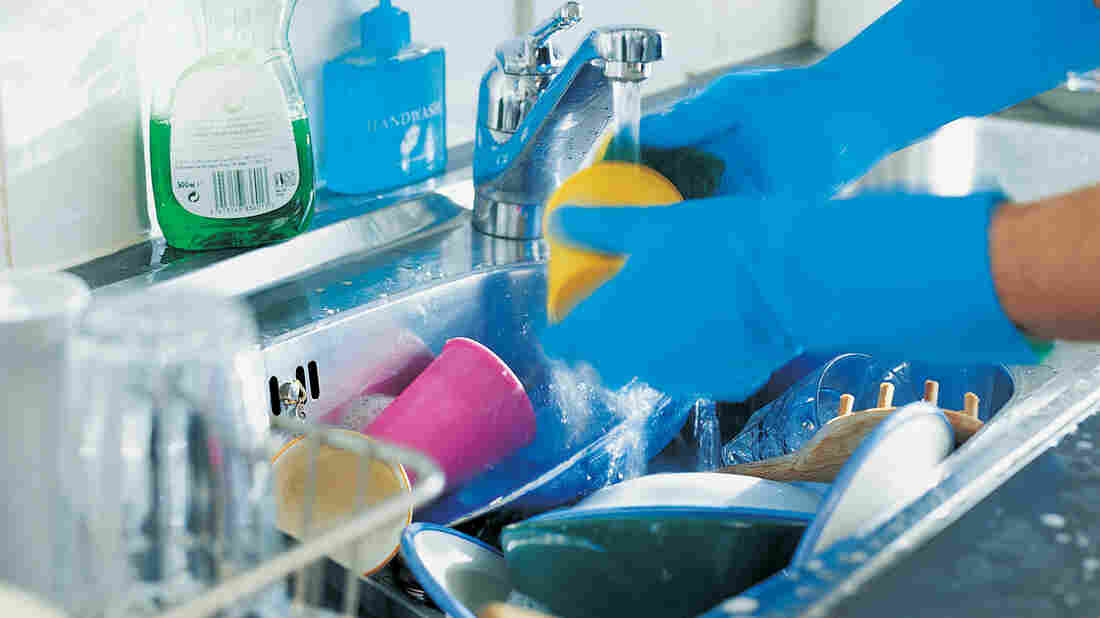 In the division of household tasks, one study shows that washing dishes is the category with the biggest discrepancy between men and women. Alex Wilson/Getty Images hide caption 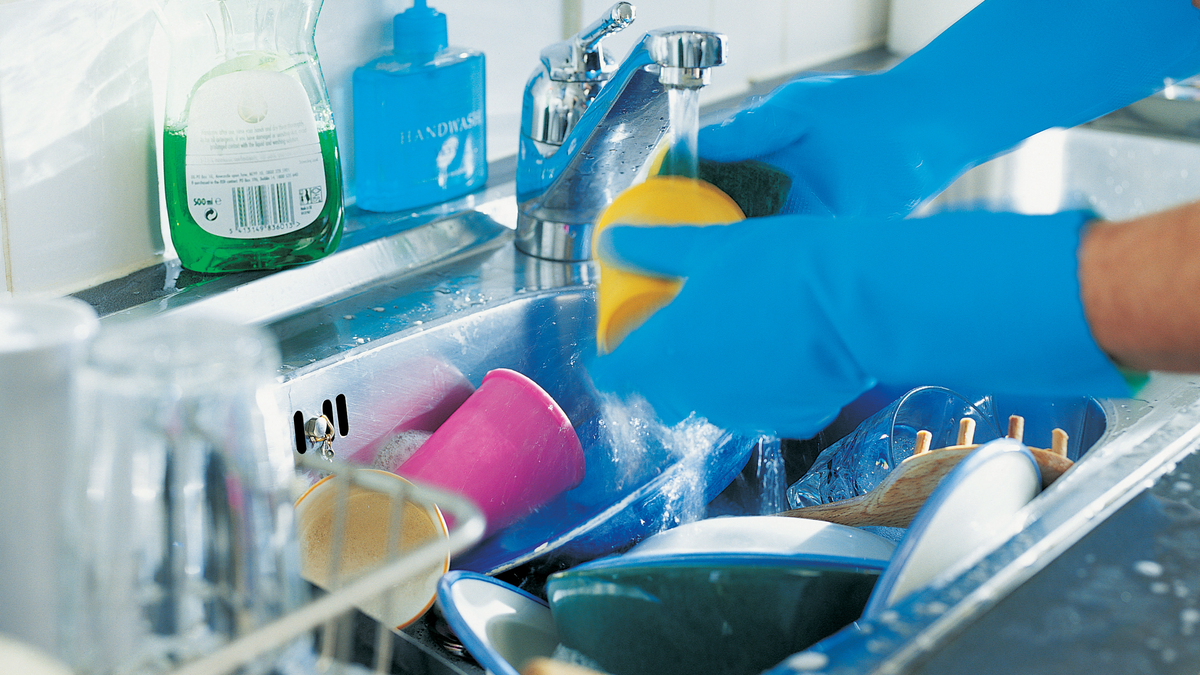 In the division of household tasks, one study shows that washing dishes is the category with the biggest discrepancy between men and women.

There was exactly one sink in my first New York apartment, which also featured a bathtub in the kitchen and a toilet tucked away by itself in a room smaller than many closets. It was fine for a person living alone, but when my roommates returned, well, the dishes — from which there was never an escape — piled up fast.

Just 10 plates could fill up the entire sink — the same one where I brushed my teeth in the morning. When I walked in the door at night, the first thing I saw was that pile of unwashed dishes. Since my two roommates (one male, one female) weren't doing their share, I had two choices: I could ignore the mess and hope the waterfall cascading down the dirty stack would wash old toothpaste down the drain, or keep cleaning other people's plates crusted with last night's dinner. Either way, it was infuriating.

While this exact situation may not be familiar to people who haven't lived in a never-renovated East Village apartment, many women know the feeling of being trapped by an ever-present heap of dirty dishes. A study published last month in the journal of the American Sociological Association, Socius, looked at the division of various household tasks and which ones had the biggest impact on the quality of heterosexual relationships.

"Most research sees housework as an omnibus thing, but it varies in qualities: how pleasurable or unpleasurable, how often it needs to be done, how gendered it is," says Dan Carlson, assistant professor of family and consumer studies at the University of Utah, one of the study's authors. Men reported the most dissatisfaction when women did the majority of home maintenance, likely because it's a violation of gender norms, Carlson explains. Yet for women, relationships hinged on dishwashing — specifically if they wound up doing all of it.

Though the division of household tasks continues to become more equitable, women still spend an average of 2.6 hours a day on these activities versus two hours a day for men, according to a 2016 survey by the Bureau of Labor Statistics. Food preparation and cleanup represent roughly a third of that time, and it's the category with the biggest discrepancy between men and women. While other household cleaning can be broken up over time, people have to eat multiple times a day, every day.

Preparing meals is time-consuming, yet it also comes with a certain household celebrity — it's a skill that people are proud to do well. "Dishes are a thankless job," says Carlson. "It's one of those things people resent having to do." Unlike vacuuming, which is a task that addresses the combined mess of all members of a household, dishes are often dirtied by one person — and it's easy to see who is the culprit. The shirker will pile them in the sink or take just one glass from the dishwasher, leaving the rest of the unloading for someone else.

This reflects an issue that has become a rallying cry since a viral essay in Harper's Bazaar expressed what many women had been experiencing, but didn't know how to explain to their partners — the concept of emotional labor. It's the idea that while many men are happy to help out with household tasks — doing the dishes, getting the kids ready for school, calling the phone company about a bill — women are the ones who end up keeping track of and delegating those jobs.

"The emotional labor involves the noticing and managing and having to ask in the right tone when you want something done," says Gemma Hartley, whose book about the subject comes out in November.

In most homes, the kitchen is a central location, and many women can't help but notice how many pans and bowls have been left for someone else to clean. Hartley says, "It's very frustrating when no one else is noticing these dishes except for you."

Hartley says that sometimes it can sound like women are "complaining about this small thing" when it comes to feeling that if they don't do the dishes, no one else will. But she explains that it's more about women not feeling noticed or appreciated for what they do, as well as the constant presence of household to-do lists taking up space in women's brains that perhaps they'd rather clear out for something else.

Dishes can seem never-ending. Even in households where partners share the load, each person might feel that they're doing the lion's share of the task. "I do dishes all throughout the day and at night when my husband is home it goes over to him," Hartley says. "He feels like he does dishes all the time but I did three loads before he gets home."

Perhaps the best fix is to return to medieval days when in lieu of plates, people ate off of pieces of hard bread called trenchers, then consumed the edible plate when the meal was done. No cleanup required.