Accessibility links
USDA Unveils Prototypes For GMO Food Labels, And They're ... Confusing : The Salt The labels use the letters BE, for bioengineered, not GMO, which critics say could baffle consumers. One design features a smiling sun that a skeptic calls "essentially propaganda for the industry." 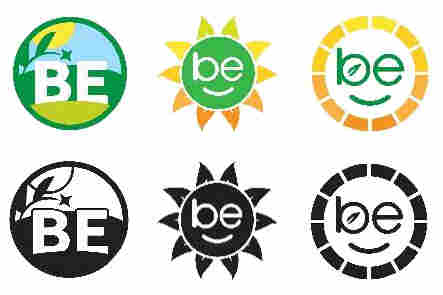 The USDA has released several options for what the labels might look like. Department of Agriculture hide caption

Foods that contains genetically modified ingredients will soon have a special label.

We recently got the first glimpse of what that label might look like, when the U.S. Department of Agriculture released its proposed guidelines.

This is the product of a decades-long fight between anti-GMO campaigners and Big Agriculture companies, which left neither side completely satisfied, as NPR has reported.

After Congress passed a bill in 2016 requiring labels on foods containing GMO ingredients, the USDA launched a long process to figure out the specifics. When it asked for feedback, it received 112,000 responses from consumers, farmers and manufacturers, among others.

There are a few options, and they look kind of like the labels you'd see on health food. They're brightly colored, with greens and blues and yellows. They feature the letters B-E. Below that, some of them have a curved line.

"I mean, they look like a little smiley face," says George Kimbrell, the legal director for the Center for Food Safety, which has pushed for labeling. "They're very pro-biotech, cartoonishly so, and to that extent are, you know, not just imparting information but instead are essentially propaganda for the industry."

Other options include a smiling sun, or a circle with growing plants.

The letters B-E stand for bioengineered — a term critics say is unfamiliar to the U.S. consumer, compared to more commonly used phrases like genetically engineered or GMO.

Grocery store shelves already have a lot of products with the label non-GMO, many of which include an image of a butterfly on a blade of grass.

"It's misleading and confusing to consumers to now switch that up and use a totally different term, bioengineered, that has not been the standard commonplace nomenclature for all of this time," says Kimbrell. He says he'd prefer these foods to be labeled with a circle saying "G" or "GMO."

The USDA said it was not able to speak about the labels until they are finalized.

And industry representatives such as Nathan Fields, the director of biotechnology and crop inputs at the National Corn Growers Association, say the new term provides a clean slate.

"There's some connotations around some of the terms that have been used that do cast the technology in a negative light," says Fields. More than 90 percent of the corn grown in the U.S. is genetically engineered, though Fields says he does not expect the labels to negatively impact the industry.

The National Corn Growers Association was supportive when Congress passed the mandatory disclosure standards, in part because states such as Vermont were creating their own rules about labeling genetically engineered foods. Fields says they were concerned about a state-by-state patchwork of laws, preferring a single national standard.

Farmers have also grown more comfortable over time with the idea of labels, says John Heisdorffer, a soybean producer and the director of the American Soybean Association, which has in the past come out against the idea. Soy, like corn, is also more than 90 percent genetically engineered. "The product has been around for a long time," Heisdorffer says. "You don't hear of any folks getting sick, or beyond that, through biotech."

Although long term risks are hard to pin down, scientists have not found hard evidence that GMO crops are any less healthy for humans to consume than other crops. That's what the National Academies of Sciences, Engineering, and Medicine concluded in 2016 after reviewing more than 900 research papers on the topic.

Nevertheless, the public wants these labels. Polls show that a majority of Americans want to know whether their food is genetically engineered.

People make choices about what they eat for many reasons. "The whole idea that people make decisions about what to put in their mouths simply on the basis of safety is, of course, ludicrous," says Glenn Stone, a Washington University in St. Louis anthropology professor who focuses on genetically modified crops.

This fight, he says, is about "clashing visions of agriculture," where people concerned about the practices of powerful corporations such as Monsanto should be able to easily choose not to purchase those products.

That's a crucial point in the broader question about which products are going to be labeled. Genetically modified ingredients, says Kimbrell, are the "tip of the spear as to the future of our food and the debate as a society that we're having about it, and how we produce it."

He and other labeling advocates want mandatory disclosures on products that contain highly refined ingredients made with genetically engineered crops. For example, foods with canola oil or corn starch, where modified genetic material could not ultimately be detected. The USDA is still deciding.

But Kimbrell says that this would allow a huge number of products that use GMO-derived ingredients to not have a label. He says it doesn't matter what's detectable in the final product. It's how it was made to begin with.

Fields, from the National Corn Growers Association, has a different view. He thinks labeling highly refined products as GMO "isn't necessarily completely honest, because there's nothing to trace back to bioengineering that occurred with that specific product."

It's also not certain that the USDA will require the label to actually say "bioengineered." The proposal say that companies could simply use a QR code, a kind of barcode that a phone can scan, to disclose info about the product. Industry professionals say they are clear and easy to use.

But critics say scanning a code would be one more obstacle for people who want to know how their food is made.

The public has until July 3 to submit comments on the USDA's proposal.