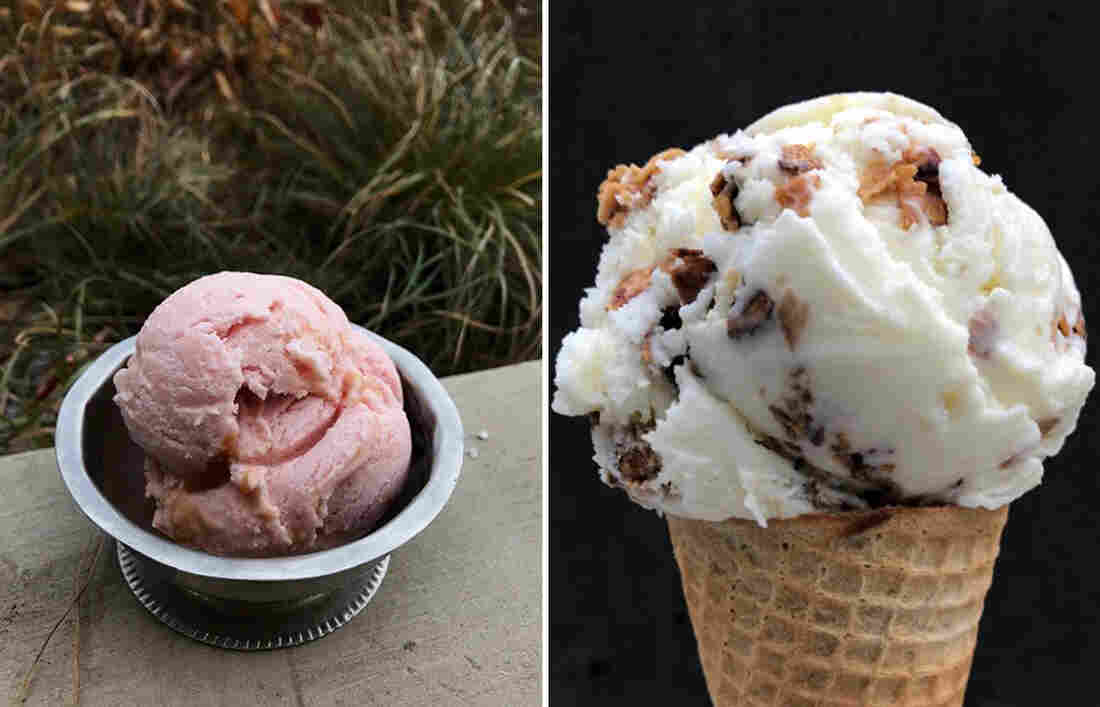 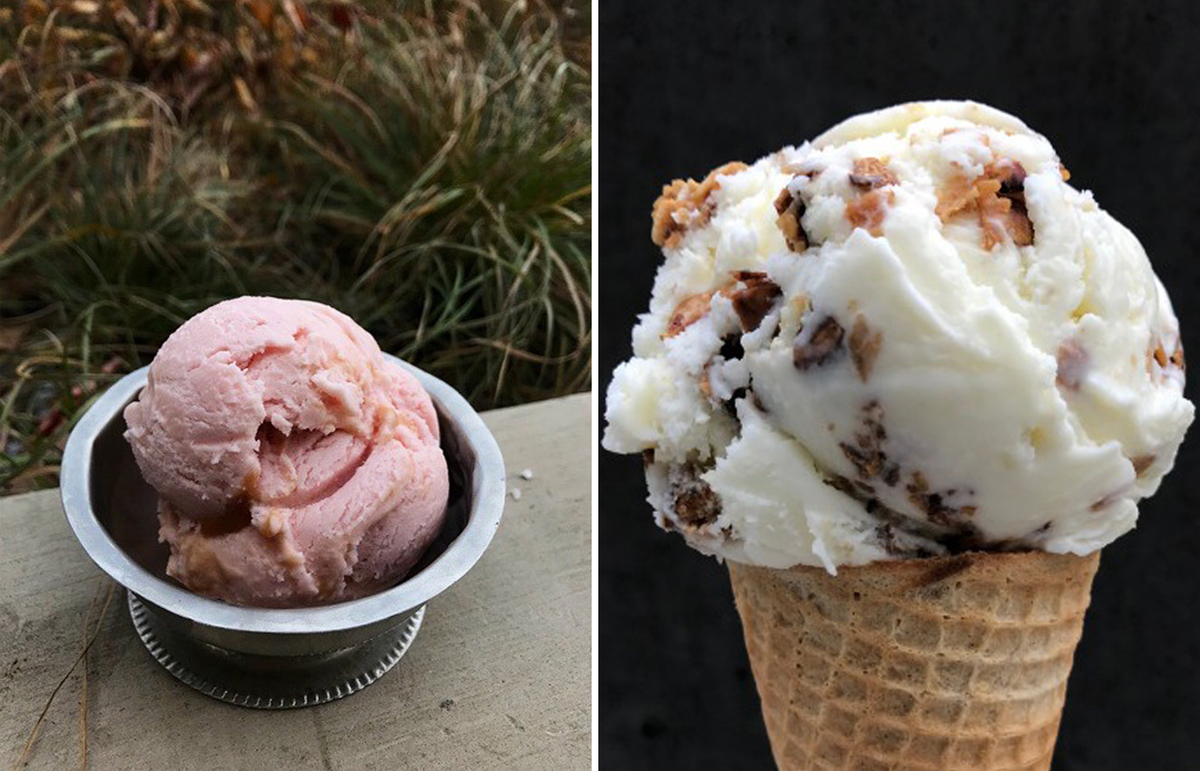 Left: Spiegelman's Raspberry Frozen Yogurt with Bone Broth Caramel Sauce, created in honor of artist Georgia O'Keeffe and two of her paintings in particular — including one of animal skulls. Right: The ice cream maker's ode to Stonehenge.

If Stonehenge Monument were an ice cream, it would be a delicious bowl of vanilla blended with bits of oats and hazelnuts and honey swirls.

At least according to Hannah Spiegelman, a small-batch ice cream maker in Baltimore who explores the sweet — as well as salty, spicy and even a little nutty — sides of historical people and places through A Sweet History, her blog, Instagram feed and occasional pop-up stand of the same name.

That quality is evident when you see a tea cup filled with her hay ice cream, sprinkled with pieces of pistachio and raspberry macarons: Spiegelman's picture-perfect ode to Impressionism, with the vibrant pink color of its crushed macarons standing out like the small but visible brush strokes that characterize this 19th century art movement.

There's Spiegelman's Mint Tea Green Ice Cream with Peach Swirl, a mix she concocted after learning about Edna Lewis, the former Hollywood dress-maker who became a culinary legend for her books on traditional Southern foods. Lewis created a peach cobbler out of fresh summer peaches that many consider to be one of her quintessential dessert recipes, and the "swirls" are meant to represent the fluidity of the garments she sewed. As for the ice cream's primary flavor? "The aroma of freshly crushed mint heightened the festivity of any occasion," Lewis once wrote, so Spiegelman took it a step further, combining crushed mint with the ultimate refreshing treat.

Spiegelman also created a green chili ice dream with red chili caramel sauce and biscochitos — an homage to New Mexico's distinct culinary heritage, as well as the state where she spent her teens. She calls the flavor Red or Green?, using the caramel sauce both as a carrier for the red chili and to show the contrast between the two chili colors and tastes, and biscochitos —anise-flavored shortbread cookies — because they're New Mexico's state cookie, as well as a nod to the Spanish settlers who first began making them in the area centuries earlier.

"The thing I miss most about home is the unique cuisine," Spiegelman says, "which I wanted to highlight in this flavor."

Spiegelman had been making ice cream as a hobby for several years before realizing she could combine her two passions: food and history. She had recently graduated from Baltimore's Goucher College with a general history degree, and was splitting her time between research work and a second job at a local ice cream shop, where she met owner Krystal Mack.

"When I talked with Krystal about my interests, she was incredibly supportive," says Spiegelman," and told me, 'there's no reason you can't bring them both together.' " 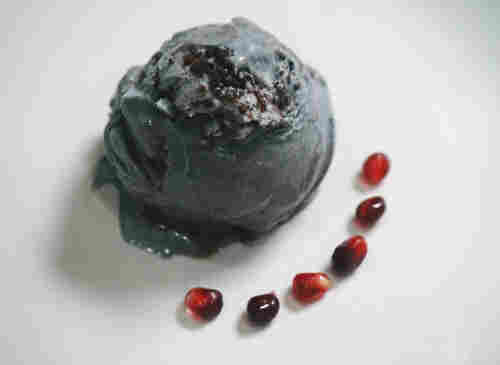 She took Mack's advice and slowly began merging the two, launching ASweetHistory.com in February 2017 with her Custard Ice Cream with Rose Water Meringue, a flavor based on the life of James Hemings — Thomas Jefferson's private chef (and the brother of Sally Hemings). Hemings' own recipe for snow eggs — a vanilla custard with rose water meringues — served as a direct inspiration.

Spiegelman has since gone on to create flavors based on everything from the 1904 World's Fair (which she says, "introduced, not invented as a lot of people think, new foods like ice cream waffle cones and Dr. Pepper," both ingredients that make up the overall flavor) to Futurism, the 20th century Italian avant-garde art movement that celebrated the machine age and urban modernity. In this case, inspiration for the almond ice cream with its strawberry black pepper swirl comes specifically from the Futurist dessert known as Italian Breasts in the Sunshine: two pieces of almond paste, each topped with a fresh strawberry and dusted with black pepper.

"My favorite part is the research," Spiegelman says. She'll often delve deep into a subject, drawing connections between certain qualities of a topic and specific ingredients.

Sometimes the connections are obvious, such as with the aptly named Poe Toaster: a cognac ice cream with rose candy. It's the sweet tooth embodiment of the "Poe Toaster," a mysterious person (or persons) who visited Edgar Allan Poe's Baltimore grave annually on the author's January 19 birthday for approximately 75 years, each time leaving behind an unfinished bottle of cognac and three red roses.

Other Sweet History flavors feature ingredients that are more abstract, such as Spiegelman's Charcoal Ice Cream with Pomegranate Swirl and Chocolate Sourdough Breadcrumbs, her edible manifestation of Persephone —whose decision to eat pomegranate seeds sealed her fate as queen of the underworld, according to Greek mythology.

"I used charcoal for the base to represent the darkness of the underworld," she says, "and the breadcrumbs are symbolic of the sheaves of grain Persephone is often depicted holding." As for their distinct chocolate sourdough flavor, "I had them left over from another [ice cream blend] and thought they'd make a nice addition."

Not every new flavor hits the mark. A friend once commissioned Spiegelman to create a flavor based on Aries, the first astrological sign of the zodiac, but "the recipient was an extremely picky eater," she says. "It was difficult finding the right mix of ingredients that would both capture an Aries' qualities and suit her tastes."

To help streamline her process, Spiegelman keeps a running list of ingredients that she thinks might work well together, and she'll turn to it when creating a new flavor. The list includes items like honey, hibiscus flowers, and molasses meringue. "I'll pick out several ingredients [from the list] that I feel best capture the subject I'm working on," she says, "then continuously narrow them down until it's an edible combination." It's especially useful while working on private commissions, which Spiegelman offers to anyone living in the greater Baltimore area. (She's currently not shipping flavors).

One commission centered around the artist Georgia O'Keeffe, and two of her paintings in particular — including one from her series of animal skulls.

"While researching Georgia I discovered that she did a lot of her own cooking, grew her own plants, and even made her own yogurt," says Spiegelman. "I wanted to incorporate these aspects, along with the painting of the animal skull, into the flavor."

The result: Raspberry Frozen Yogurt with Bone Broth Caramel Sauce. "I used the raspberries because I wanted to match some of the color in her Red Canna paintings," a vibrantly-hued abstract paintings of a red canna flower up-close.

Along with commissions and pop-up events around her city, Spiegelman also runs ice cream workshops. She'll be heading to graduate school for gastronomic studies in the fall, though she says those hungry for knowledge shouldn't worry: Through posts, pics, and occasional commissions, A Sweet History will still be serving up scoops of the past, one flavor at a time.