Accessibility links
Only 6 People In The World Know The Recipe For Portugal's Famous Tarts : The Salt In a family-owned cafe outside of Lisbon, select bakers make a custard treat called the Pastel de Belém, which draws fans from all over the world. But the recipe has been closely guarded since 1837. 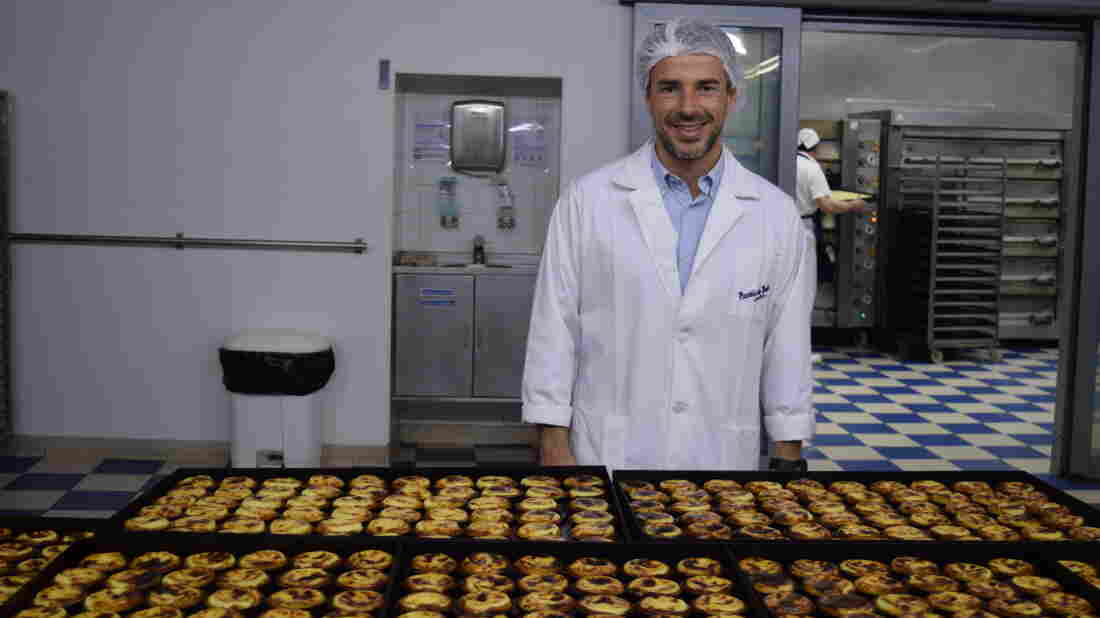 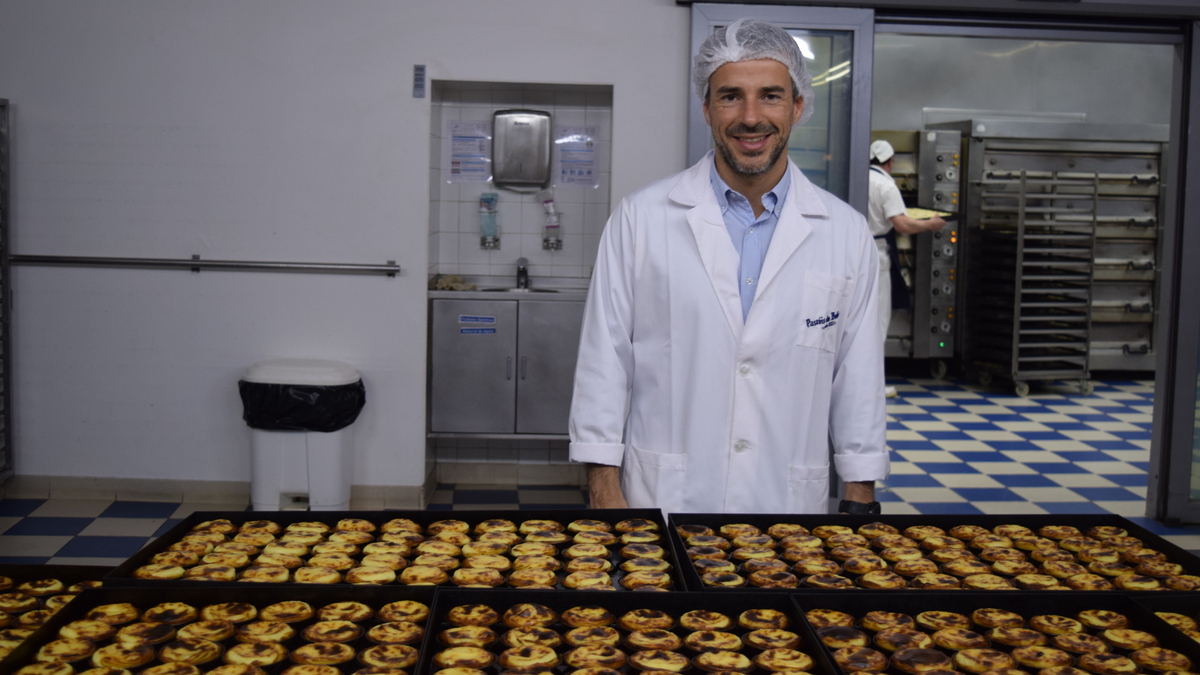 Miguel Clarinha has been managing the shop for nine years alongside his cousin, Penelope. He believes the secret to its success is keeping the bakery a family-owned business.

We all probably have at least one secret family recipe — think your grandma's chicken parmesan or uncle's "mystery" jello mold.

But keeping that recipe a secret becomes a bit more complicated when an entire country falls in love with it.

Along with his cousin, Penelope, Clarinha manages The Antiga Confeitaria de Belem, an airy bakery and café just outside Lisbon, Portugal.

The shop features a wide selection of traditional Portuguese cakes and coffees. But the real showstopper Clarinha is talking about is the Pastel de Belém (Pasteis if you're talking about more than one) — a round, flaky and buttery tart with an egg custard filling.

"It's kind of like a crème brulée tart," says Lordes Pinero, who drove nearly 200 miles from her home in southern Portugal to visit the shop. "We're going to ask for the recipe to see if they'll give it to us."

Pinero will find out soon enough that's she's out of luck. Only six people in the world know this recipe — three of the shop's owners and three entrusted chefs who have been working in the bakery for more than 40 years.

"They were good bakers and also someone that management trusted," says Clarinha.

Their names are Ramiro, Carlos and Vitor. They work in a back room sealed off by a large white door marked as "Oficina do Segredo," or secret office. Every morning, the three men knead out huge slabs of the buttery dough and the homemade egg custard filling.

That makes enough to produce around 20,000 Pasteis a day.

Imitations, known as the Pastel de Nata, can be found all over Portugal — all over the world, really. But the tarts made here are called "Pastel de Belém," named for the town where they were invented back in the 18th century — and still baked today. 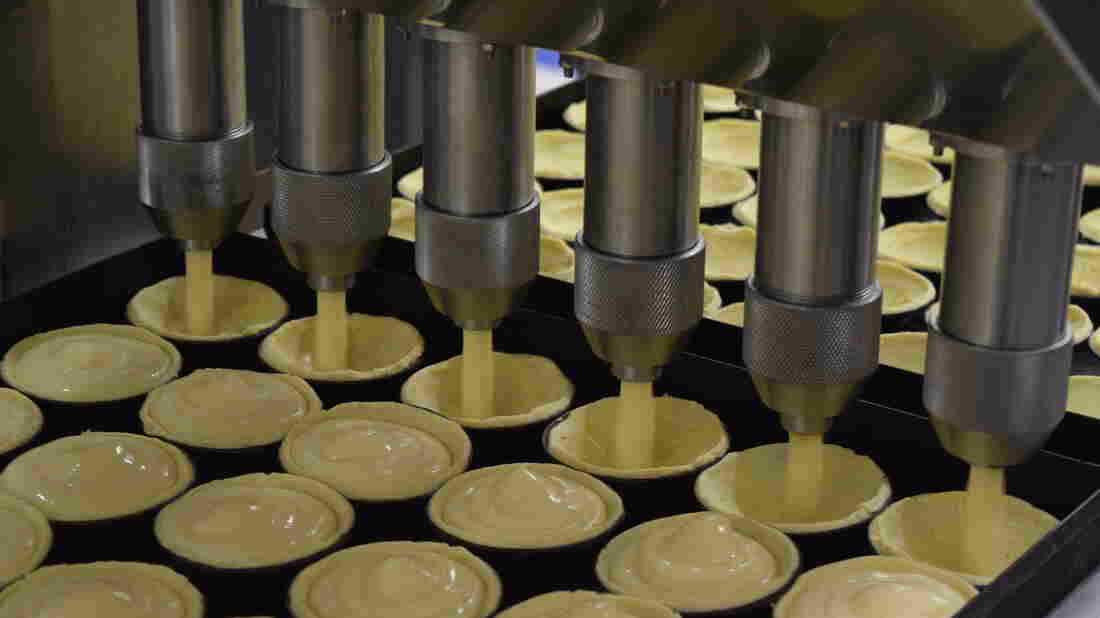 So many customers flock to the shop that Clarinha says the bakery produces more than 20,000 of the homemade custard tarts each day. Rebecca Rosman/NPR hide caption 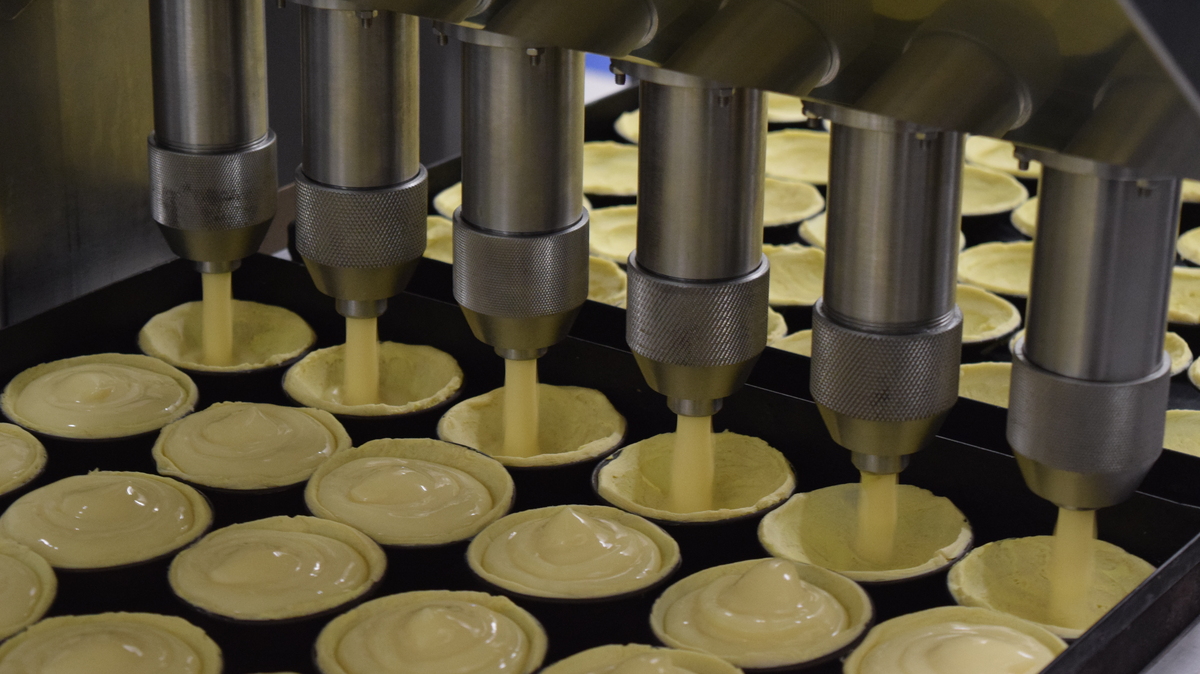 So many customers flock to the shop that Clarinha says the bakery produces more than 20,000 of the homemade custard tarts each day.

It all started at the neighboring Jeronimos Monastery, where monks would use egg whites to starch their clothing. The leftover yolks became dessert.

The monastery closed in 1820 following a liberal revolution, but the recipe found new life after being passed down to a sugar refinery owner. In 1837, he opened up a small trading shop where he sold the tarts.

That shop still exists today as the bakery's front counter.

Clarinha's family took over the business in the early 20th century. They now have been overseeing operations for four generations. It's a detail he thinks makes just as big a difference as the secret recipe itself.

"If this wasn't a family-owned business it would have expanded," says Clarinha. "The cakes would probably start being frozen and exposed and franchised ... and that's really not our philosophy."

It's a tradition that keeps customers coming back. Giles Williams first came to the shop on holiday from London 20 years ago.

Immediately when he landed at the airport on a recent trip, he knew exactly where he was taking his friends.

"Every time I come to Lisbon I come here within about the first two hours," says Williams. "They're just the best."

What makes them the best? It's hard to know without having the exact recipe, but most customers talk about the freshness of the tarts, which are served just out of the oven.

"They're crispy and still warm here, whereas other places we eat them cold," says Rosa Morigado, a visitor from France. "It really tastes different when it's warm ... topped with cinnamon and powdered sugar."

At only just over a euro a pop, customers also say they can live without learning the secret recipe that lies behind the big white door.