Accessibility links
Want Your Child To Eat (Almost) Everything? There Is A Way : The Salt Giving kids a diet varied in flavors and textures from the get-go can help them be more open to trying new foods. The problem is America's food landscape makes that ideal hard to live up to. 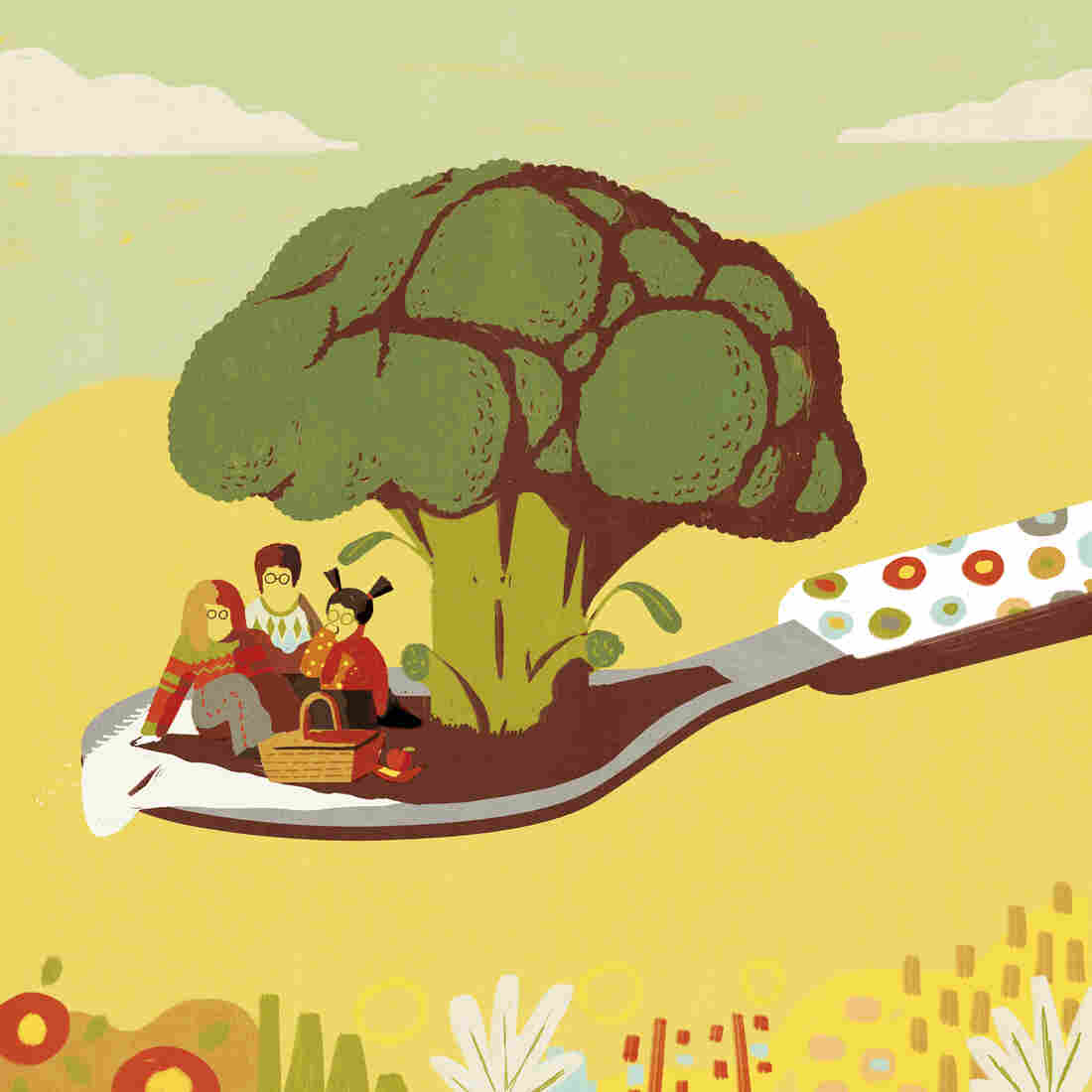 Experts will tell you that if you want to raise a kid who eats just about everything, you should feed them what you eat — assuming you're eating a varied, healthy diet. It's what most cultures have done for most of human history.

"They're born preferring salty and sweet, and if those tastes are in foods, most kids are going to be very attracted to them," says Leann Birch, a research psychologist with the University of Georgia. Birch has spent more than four decades researching why kids eat what they eat. She says parents should expect their kids to reject new foods at first.

"That's really just an inbuilt response to something that's new," Birch says. It's called neophobia. But if you expose kids enough times to different flavors — including sour, bitter and even spicy ones, but don't force it – "they typically will learn to eat a lot of new things."

Some people recommend sprinkling a bit of sugar, salt or butter to help kids accept new foods. Birch says that works, but "it can come back to bite you" because, as her research has found, kids might end up only liking the food that way. Using dips can also encourage kids to explore vegetables, she says – "you know, nobody's afraid of something with ranch dressing on it."

"If you think about what the food industry puts out for children between the ages of 2 and 12 as things that are appropriate for them to eat, they're really making it difficult for parents to promote consumption of fruits and vegetables and a healthy, non-processed kind of diet," Birch says.

And that, Birch says, is the bigger battle.

So what happens when parents get a different message? Little Ashwin Gollapalli is one example. He's just 5 years old, but his palate is pretty darn sophisticated. One of Ashwin's favorite foods is an Indian pickle made of lemons preserved with spicy red chiles, salt and oil.

He and I both tuck into a plateful at his home in Northern Virginia. It's tasty but so hot it leaves my lips tingling. But Ashwin? He just wants more.

How did little Ashwin develop such a broad palate? It turns out that his parents set up him up from his very first bite. Ashwin's mom, Viji Sundaram, says she has basically been feeding him whatever the rest of the family eats from the get-go. Sundaram, who grew up in Chennai, India, says it's a common practice there. And it's one she kept up when her kids were born here in the U.S.

For many Hindus in India and elsewhere, it all starts with a ceremony called Annaprasana (also known as Annaprashan or Annaprasna). The ceremony marks baby's first taste of solid foods. Relatives and friends gather for the occasion. They bless the child, essentially saying, "From this point onwards, you're eating something else that is not your mom's milk and you are blessed," Sundaram explains. "Be confident that this will agree with you and this nutrition is going to make you grow."

In other words, it's a blessing for a healthy life — and healthy eating.

But that thinking isn't just ceremonial. Sundaram says that right away, she started introducing her babies to table foods. Yogurt came first, followed quickly by lentils and rice. By the time they were around 7 months old, Sundaram was feeding her children more challenging flavors, like those in rasam — a spicy Indian soup made with chiles, cumin and other spices. She would mix the rasam with rice and temper the flavors with some ghee, a type of clarified butter.

By the time they were 1, Ashwin and his 10-year-old sister, Janani, were both eating table foods. (Janani is the only child I've ever met who has told me she loves beetroot.)

Exposing kids to a variety of flavors early in life "tends to produce kids who are more willing to try other things," says Birch.

"Babies are really born predisposed to learn to eat the diets of what the people around them are eating," she says.

Ideally, Birch and other experts say, all children would eat whatever their parents eat from the time they start solid foods (mashed up at first, of course). But that can be hard for many parents to live up to.

For one thing, there's cost. Parents may want to repeatedly expose their kids to healthy foods, but it's hard to watch them reject broccoli or Brussels sprouts over and over – especially if you're on a tight budget.

"Think of how expensive it is to buy fresh fruit or vegetables [rather] than those manufactured sweets or salt," says Julie Mennella, a developmental biopsychologist at the Monell Chemical Senses Center who studies the development of food and flavor preferences.

And then, there is the time crunch that is all too familiar to many parents.

"It's hard as a parent to go to work, to make money, to come home to try to put together a dinner really fast and serve it to your kid and then they don't touch it," says pediatrician Eric Ball with CHOC Children's health network in Southern California.

Ball spends a lot of time counseling parents on nutrition, and he says this situation is common. "It's very, very tempting to just give them something else — you know, make them a peanut butter and jelly sandwich or chicken nuggets."

Instead, Ball says parents need to be role models for their kids at the dinner table. "In other words, parents have to eat what they want their children to eat," he says.

And if you don't want your kid to demand chicken nuggets and ice cream, don't bring those foods home. "Once the food is brought into your house, the child is either going to eat it or you can have a fight about it," he says. "So you're going to lose either way."

But if you've made a nutritious meal and your kid still won't eat it? Ball says don't stress about it. Your kid won't starve. "I very firmly believe that children do a really good job of eating when they're hungry and not eating when they're not hungry," he says.

Ball points to advice his mother-in-law received from a pediatrician 40 years ago, back when his wife was a toddler: "Expect her to eat one meal, play with one meal, and ignore one meal."

And you know what? Even experts have their parenting food challenges. "I hate to say this, but I had a kid who went through a period where all he ate were white things," Birch confessed. Eventually her son, now an adult, grew out of it. "He now eats everything," she reports. Except oysters.