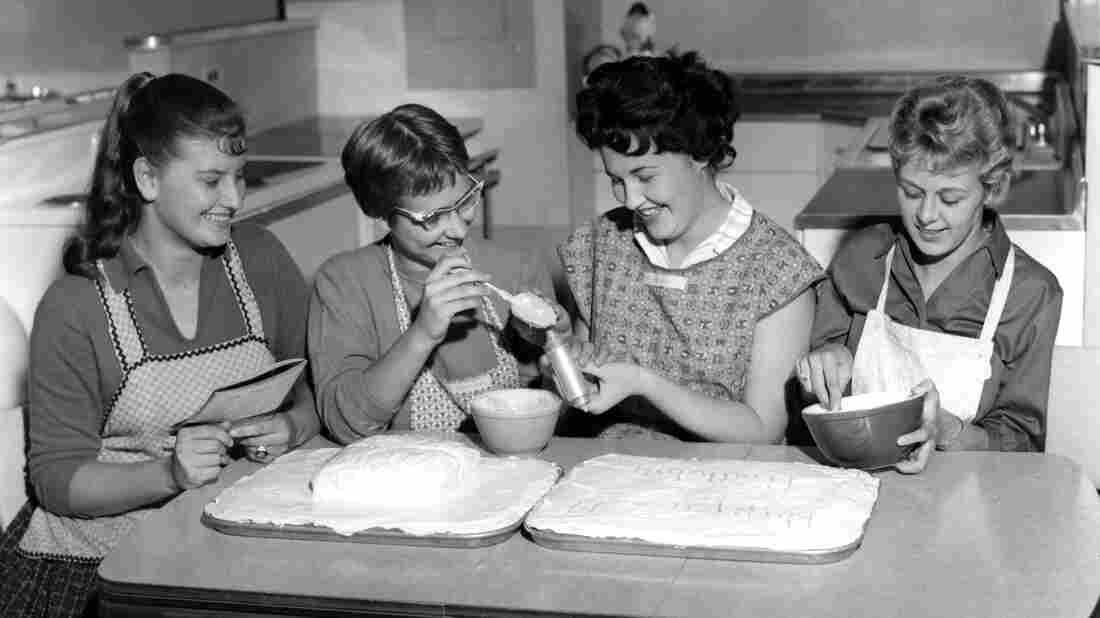 In midcentury home economic classes, girls learned to cook for their future husbands while boys took shop. But now kids might learn about healthy relationships or how to balance a bank account. Mark Jay Goebel/Getty Images hide caption 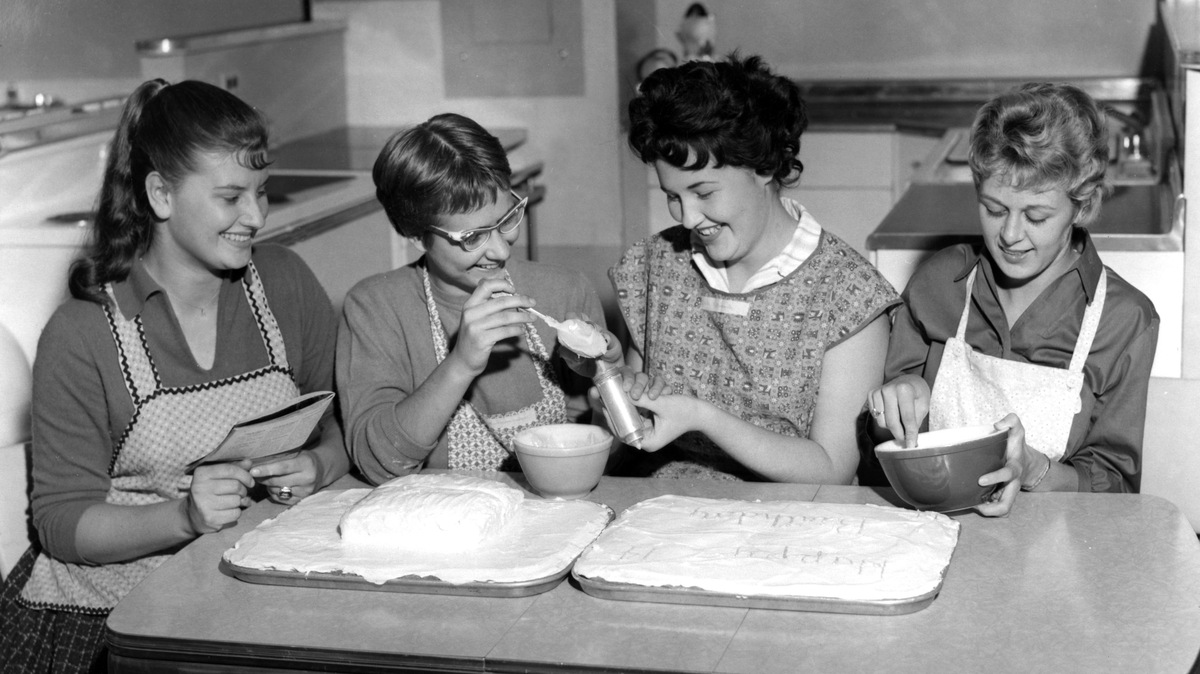 In midcentury home economic classes, girls learned to cook for their future husbands while boys took shop. But now kids might learn about healthy relationships or how to balance a bank account.

"Sometimes we take for granted that kids know how to wash dishes," says Susan Turgeson, president of the Association of Teacher Educators for family and consumer sciences. "I never thought I was going to have to explain, step by step, how to put the drain plug in, the amount of soap to be used."

Yet in many family and consumer sciences (FCS) classes in the United States, once known as "home economics," teachers are instructing students in basics such as how to keep countertops clean or tell a teaspoon from a tablespoon. In 2010, the Healthy Hunger-Free Kids Act sought to address the rise of childhood obesity. But despite the renewed interest in showing children how to eat well, FCS classes haven't gained traction along with that movement.

These courses haven't gone away entirely, but their presence in schools is dwindling. In 2012 there were only 3.5 million students enrolled in FCS secondary programs, a decrease of 38 percent over a decade. Many blame an ongoing shortage of qualified teachers, while others worry that continued focus on testing, along with budget slashing, will make it hard to bring FCS electives back into the curriculum.

"Society couldn't get over the stereotype of the home economics teacher," says Gayla Randal, educational and program consultant for the Kansas State Department of Education, which is why the name was changed to family and consumer sciences. She says that the rise of testing and No Child Left Behind in public schools led to a dark time for home economics. "Anything that wasn't about a test score was scrutinized."

What is "women's work," exactly?

Though home economics started in the early 1900s as a way to professionalize domestic labor, giving women opportunities outside the home while simultaneously uplifting the value of "women's work" in society, by the 1960s the field had become a feminist pariah. As Megan J. Elias writes in Stir It Up: Home Economics in American Culture, figures like Betty Friedan "rejected outright the idea that housework could be fulfilling and implicitly condemned all projects that offered to help women find satisfaction in traditional housewivery."

While thinking of domestic labor as less important than professional careers — such as being a lawyer — is its own issue, there were real problems with midcentury home economics courses. There's the memory of girls being sent to learn about child care and cooking while boys took shop class — all in preparation to take on traditional gender roles in marriage.

"When my mom took her home economics courses in the 1950s, they learned every egg preparation there was," Turgeson says. "The reason for that was, they didn't know what kind of eggs their husband might want." In today's world, husbands are expected to make their own eggs, she adds. "When I'm teaching an egg unit, we're thinking about the function of an egg in the recipe." What do eggs do, what kind of nutrition do they provide, and how do you look at shelf after shelf of cartons and decipher through the labeling which kind is best to buy?

"There's a lot of fake news about nutrition, so we promote how to get good sourcing of information," Randal says of family and consumer sciences classes. Sustainable eating has become another important part of many FCS classes, which might now include subjects such as community gardening, composting and even hydroponics. As Turgeson says, "Those are things you would have never seen in a 1950s classroom."

FCS classes also commonly address personal finance, healthy relationships, how to balance work and home responsibility, and child development. "In the good old days you got that at home," says Megan Vincent, a FCS education specialist for the state of Montana. "But now you have two working parents ... these courses fill the gaps for what parents can no longer do."

Carol Werhan, an FCS educator and member of the board of the American Association of Family and Consumer Sciences, explains that cooking taught through FCS courses is more about having the confidence to experiment in the kitchen than becoming a trained chef. "People don't need to have perfection — you have to know what are the failures that are OK." Burnt edges can be cut off. Overcooked meat can still be served. "Just because you have a flop in the kitchen doesn't mean it needs to be brought up at the dinner table," Werhan says.

Sometimes the skills taught in FCS can be directly applied to a career, yet what the classes are really trying to do is create balance in students' lives. "Not everyone wants to be a chef or early childhood teacher or caregiver," Werhan says, explaining that FCS classes make for "a well-rounded, world-literate human being, which makes a great workforce and a great community."

Some states, such as Indiana and Pennsylvania, require some coursework in FCS in middle or high school. But it's often offered as an elective. Vincent says 100 of Montana's 170 high schools offers some type of FCS class. While it's no longer the case that the vast majority of students in these classes are female, Vincent does share that every FCS teacher in the state is currently female — though one male teacher will be starting in the fall. As of 2012, students in middle school were split evenly between boys and girls, while in high school only 35 percent of students were male. The change is likely because most FCS classes are entirely elective at the high school level. Participation levels, however, are still a huge shift from 1959, when only 1.3 percent of home economics students were male.

The search for teachers

Unfortunately, even when states might want to offer more FCS classes, a good teacher can be hard to find. According to a 2012 study headed by Werhan, "Over half of all states continue to have an issue with hiring adequate numbers of highly qualified FCS teachers." In Montana, some of the gaps in FCS education are being filled by organizations like Food Corps, which teach students about food and how it's grown and processed.

"Agriculture is our largest economy, and yet you still have students that don't know where our food comes from," Vincent says. This is changing for children in lower grades, who are starting to get this exposure, but many are still "coming up the pipeline" as Vincent says, and it's too early to tell what kind of effects this education will have.

It seems like one thing every FCS teacher will tell you is that their subject is one that, unlike calculus, students never wonder whether it will be relevant. "Wait five minutes in FCS, and you'll use this information later this week and later in life," Turgeson says. For some students, the classes are a break from their academics-heavy schedules and can be a place where lessons — say about fractions or chemistry — can sink in through exposure to those same concepts in the kitchen.

"Everything about FCS is really teaching resource management and employability skills, creative and critical thinking — we just do it through food," explains Turgeson.