Accessibility links
Drinking Alcohol Can Raise Cancer Risk. How Much Is Too Much? : The Salt A study finds light drinkers have the lowest combined risk of getting cancer and dying prematurely — lower than nondrinkers. Alcohol is estimated to be the third-largest contributor to cancer deaths. 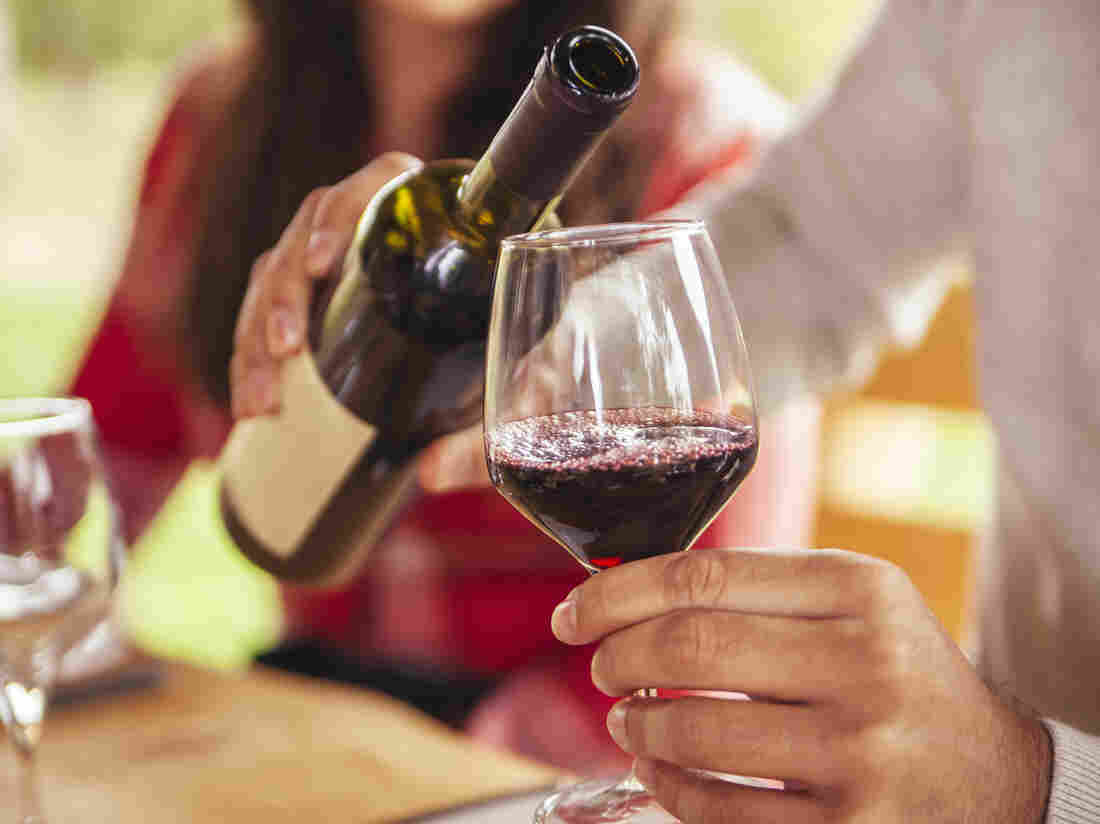 A study finds light drinkers have the lowest combined risk of getting cancer and dying prematurely — lower than nondrinkers. Alcohol is estimated to be the third-largest contributor to overall cancer deaths. Westend61/Getty Images hide caption 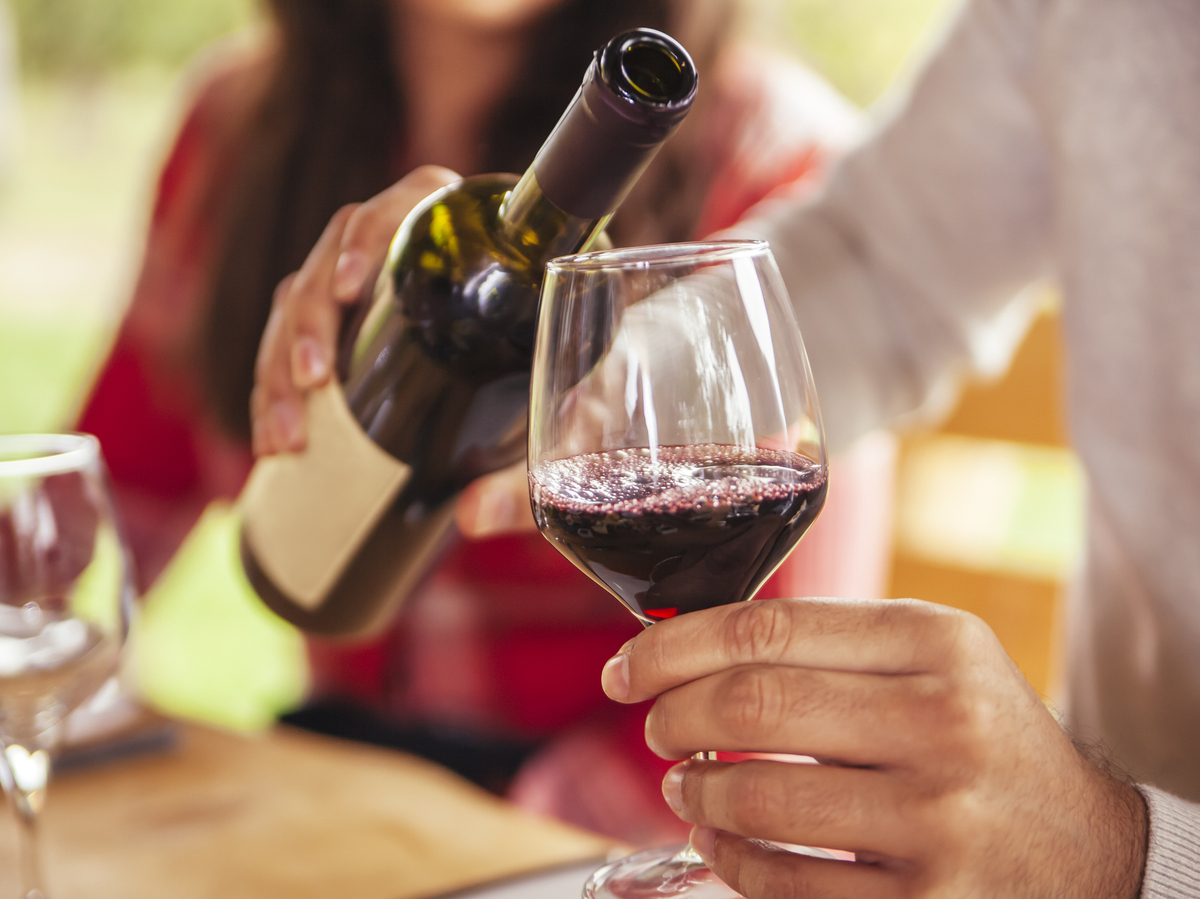 A study finds light drinkers have the lowest combined risk of getting cancer and dying prematurely — lower than nondrinkers. Alcohol is estimated to be the third-largest contributor to overall cancer deaths.

A little bit of alcohol has been shown to be protective of heart health. But how does drinking influence cancer risk?

A new study finds that light drinkers have the lowest combined risk of developing cancer and dying prematurely — even lower than people who don't drink at all. But here's the rub: In this study, "light" drinking is defined as one to five drinks per week.

Researchers studied about 100,000 adults who lived in cities across the U.S., including Birmingham, Ala.; Boulder, Colo.; Los Angeles; and Pittsburgh. The participants were in their mid-50s to early 70s when the study began, and they each completed a survey about their alcohol consumption. Researchers tracked their health for about nine years, and they found that the more a person drank, the higher their risk of getting cancer and dying.

"We definitely think [the findings] give a bigger picture of what's going on," Kunzmann says. For this study, he collaborated with researchers at the National Cancer Institute in the U.S. The study is published in the scientific journal PLOS Medicine.

The study adds to the evidence that cancer risk may rise when people drink more than one drink per day, but the increase is modest. Moderate drinkers in the study had about a 10 percent increased risk of getting cancer.

Not surprisingly, the study finds that heavy drinkers are most at risk. For instance, men who drank three or more drinks per day were three to four times more likely to develop cancer of the esophagus and liver cancer. Other alcohol-related cancers include colorectal cancer and breast cancer in women.

"This study reinforces [the evidence] that people who drink a lot have higher rates of cancer and higher rates of dying from those cancers," says Noelle LoConte, an oncologist and associate professor at the University of Wisconsin. She was not involved in the study, but NPR asked her to review the evidence.

The study comes at a time when the American Society of Clinical Oncology, a group of cancer doctors, is trying to spread awareness about the risks of excessive alcohol consumption. LoConte is the lead author of the group's recent statement calling for policies aimed at reducing alcohol consumption.

"We're not proponents of complete abstinence. There probably is an amount of drinking that's OK," LoConte says. "But from a cancer-prevention standpoint, drinking the least amount of alcohol possible would be the best strategy."

Many studies have pointed to the risks of excessive drinking, yet "we do not think that most Americans are aware of the link between alcohol and cancer," LoConte says.

When it comes to the lifestyle factors and habits that people can control — or change — to reduce their risk of disease, alcohol is pretty high up on the list. "Alcohol is estimated to be the third-largest modifiable risk factor for cancer," says Susan Gapstur, an epidemiologist with the American Cancer Society.

Alcohol is also estimated to be the third-largest contributor to overall cancer deaths in both men and women, Gapstur says. "Strikingly, alcohol is estimated to account for 39,060 breast cancers [in the U.S.] per year in women," she says.

One step toward cutting back is to be more aware — and more realistic — about how much you drink. "The first thing we need to talk about is: What is a drink?" says LoConte.

A drink is a single shot of liquor, 5 ounces of wine or 12 ounces of beer. It's easy to consume more than you realize. Some mixed drinks contain multiple shots of liquor, and some craft beers have higher concentrations of alcohol.

But LoConte says this may turn out to be too much. "I think this study, as I reviewed it, looked like a safer amount would be one drink a day for everybody, regardless of gender," LoConte says.

At least that's what the study suggests. More research is underway.