Accessibility links
Red Meat Allergies Caused By Tick Bites Are On The Rise : The Salt If you are bitten by a Lone Star tick, you could develop an unusual allergy to red meat. And as this tick's territory spreads beyond the Southeast, the allergy seems to be spreading with it. 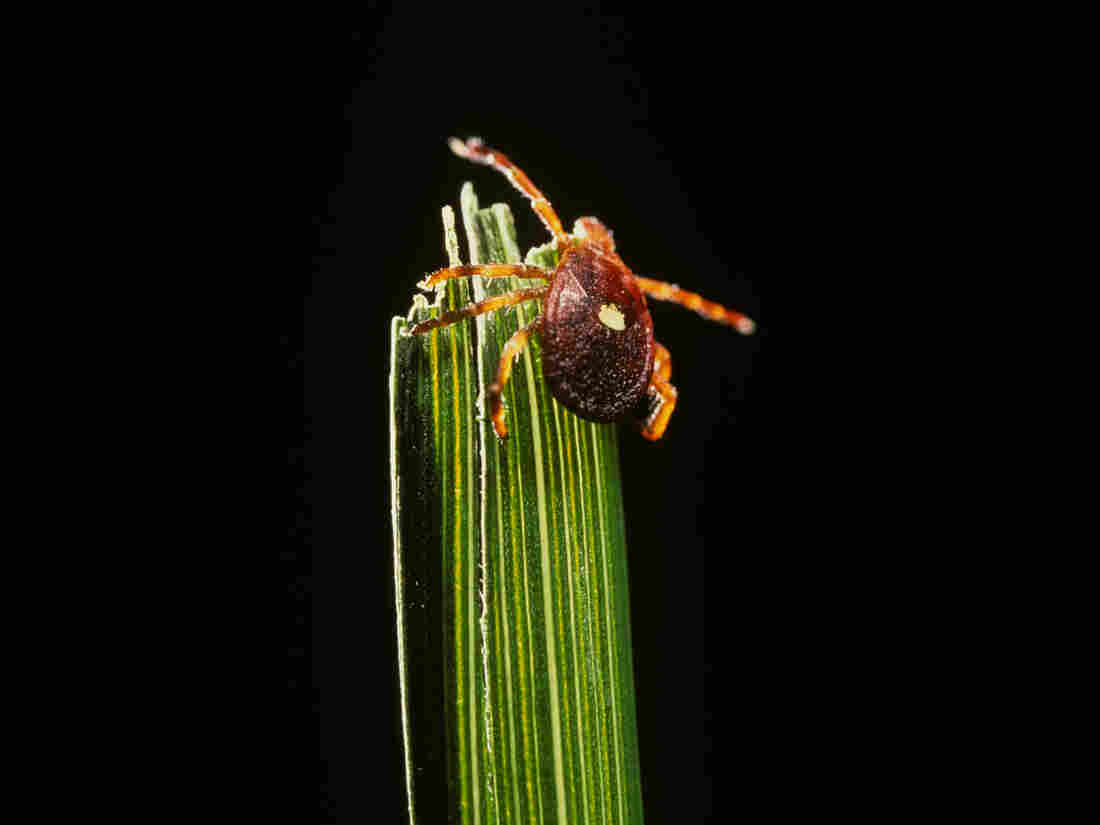 If you are bitten by a Lone Star tick, you could develop an unusual allergy to red meat. And as this tick's territory spreads beyond the Southeast, the allergy seems to be spreading with it. Robert Noonan/Science Source hide caption 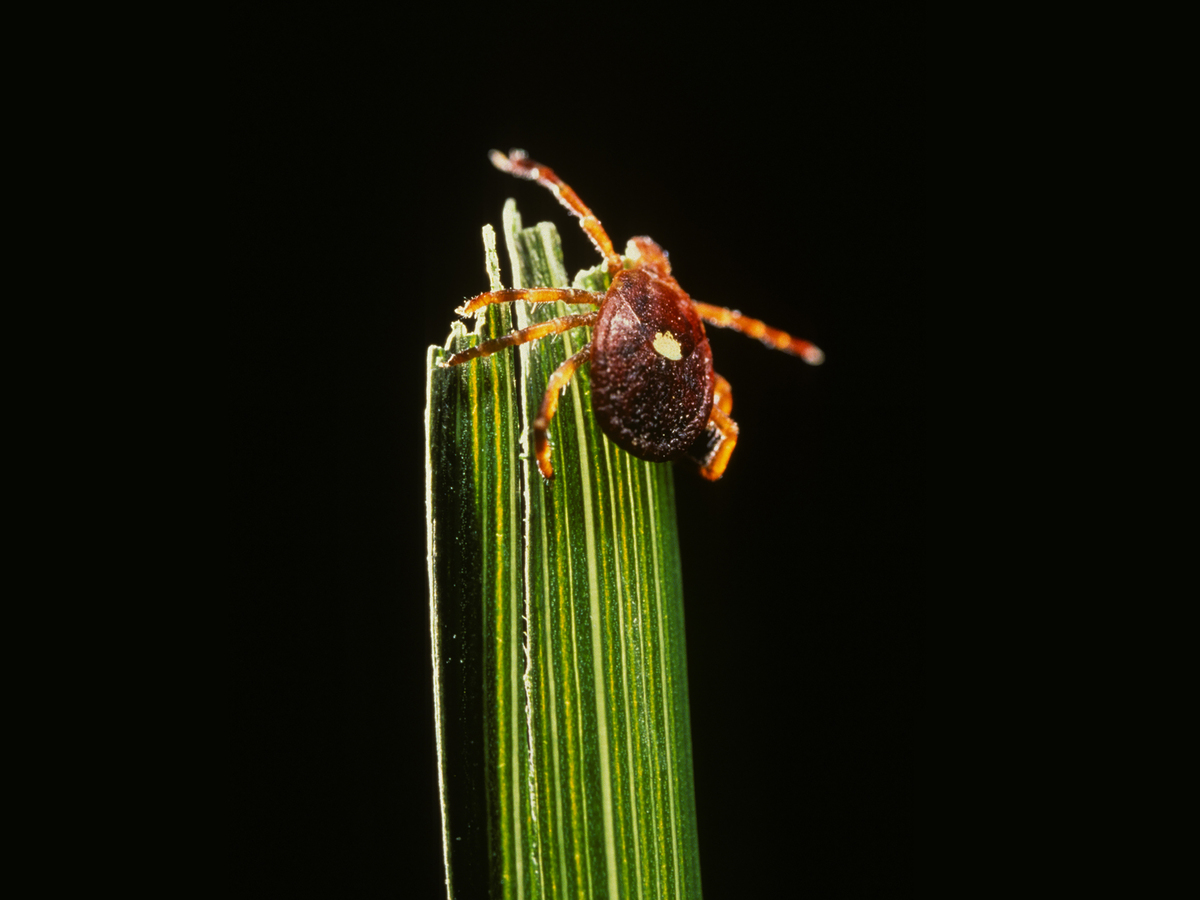 If you are bitten by a Lone Star tick, you could develop an unusual allergy to red meat. And as this tick's territory spreads beyond the Southeast, the allergy seems to be spreading with it.

Tick bites can cause all sorts of nasty afflictions. And if you're bitten by a Lone Star tick, here's one more to add to the list: a red meat allergy.

Laura Stirling, 51, a Realtor who lives in Severna Park, Md., was diagnosed with the allergy last year. She got a tick bite while walking on a trail with her dog, Gunner, near her home.

"I found [the tick] 3 or 4 inches to the left of my hip bone," Stirling recalls. At the time, she say, she didn't think much of it. "I just took it off and threw it away."

Then, three weeks later, after she ate an Italian-style pork sausage for dinner, she had a horrible reaction. The reaction began about six hours after her meal, which is typical of this allergy.

"It was the middle of the night. I woke up covered in hives," Stirling recalls. She woke her husband with all her itching and scratching. She felt lightheaded, and she experienced stomachaches and other gastrointestinal troubles.

An allergist gave her a blood test to check for an alpha-gal meat allergy. When the test came back positive, she was told to avoid all red meat, including beef, pork and lamb. (Despite a long-running campaign marketing it as "The Other White Meat," pork is classified as a red meat.) Some people who develop the allergy can no longer tolerate dairy products.

Stirling was surprised when she first got the news. "I thought it was completely crazy, because I've eaten dairy and red meat all my life," she says. But she quickly realized the diagnosis was spot on. Meat and dairy did trigger her symptoms. 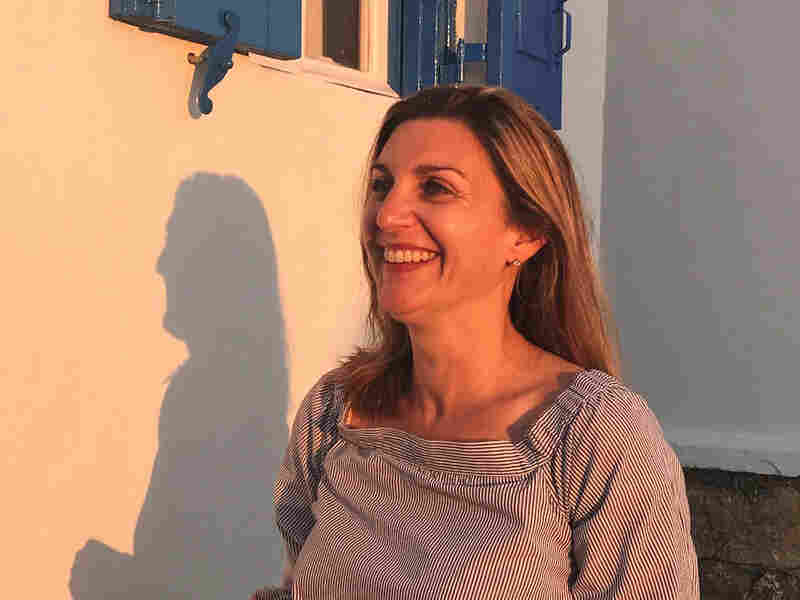 Laura Stirling tested positive for the alpha-gal meat allergy after having an allergic reaction to eating meat. Courtesy of Laura Stirling hide caption 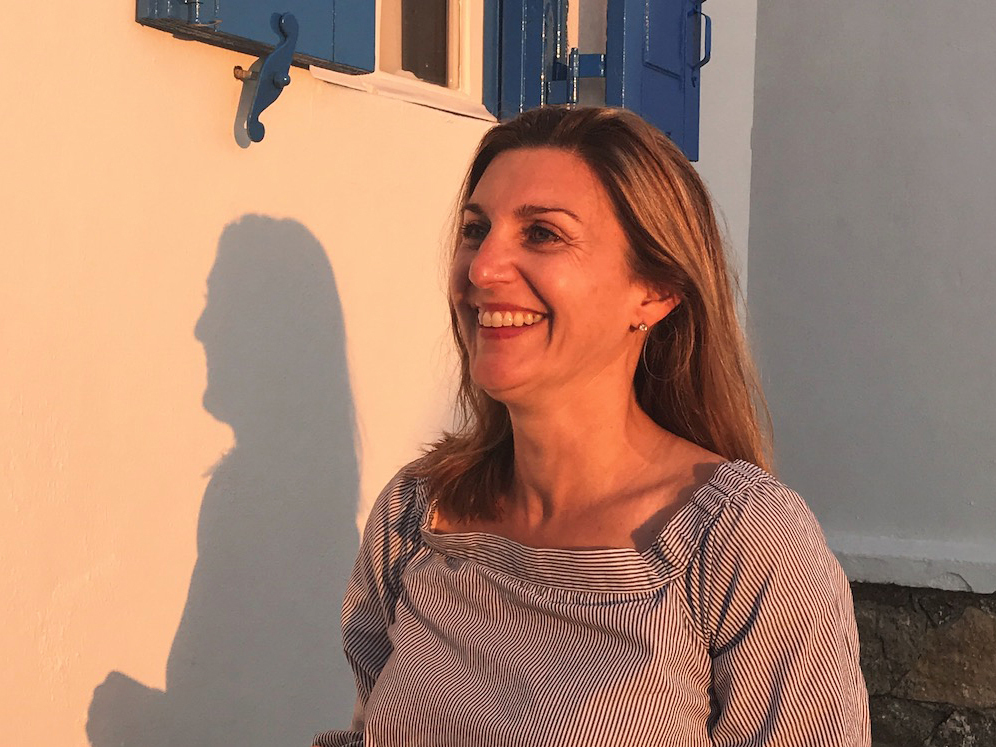 Laura Stirling tested positive for the alpha-gal meat allergy after having an allergic reaction to eating meat.

"Her story is really interesting," says Dr. Scott Commins, an allergist and associate professor of medicine at the University of North Carolina, Chapel Hill. He says it is a meat allergy, but about 15 to 20 percent of patients with the alpha-gal allergy also report getting symptoms from dairy, especially high-fat dairy such as ice cream.

About 10 years ago, Commins was among the first physicians to identify the allergy in patients with tick bites. Back then, there were just a few dozen known cases.

That has increased dramatically. "We're confident the number is over 5,000 [cases], and that's in the U.S. alone," Commins says. There are also cases in Sweden, Germany and Australia — likely linked to other species of ticks. 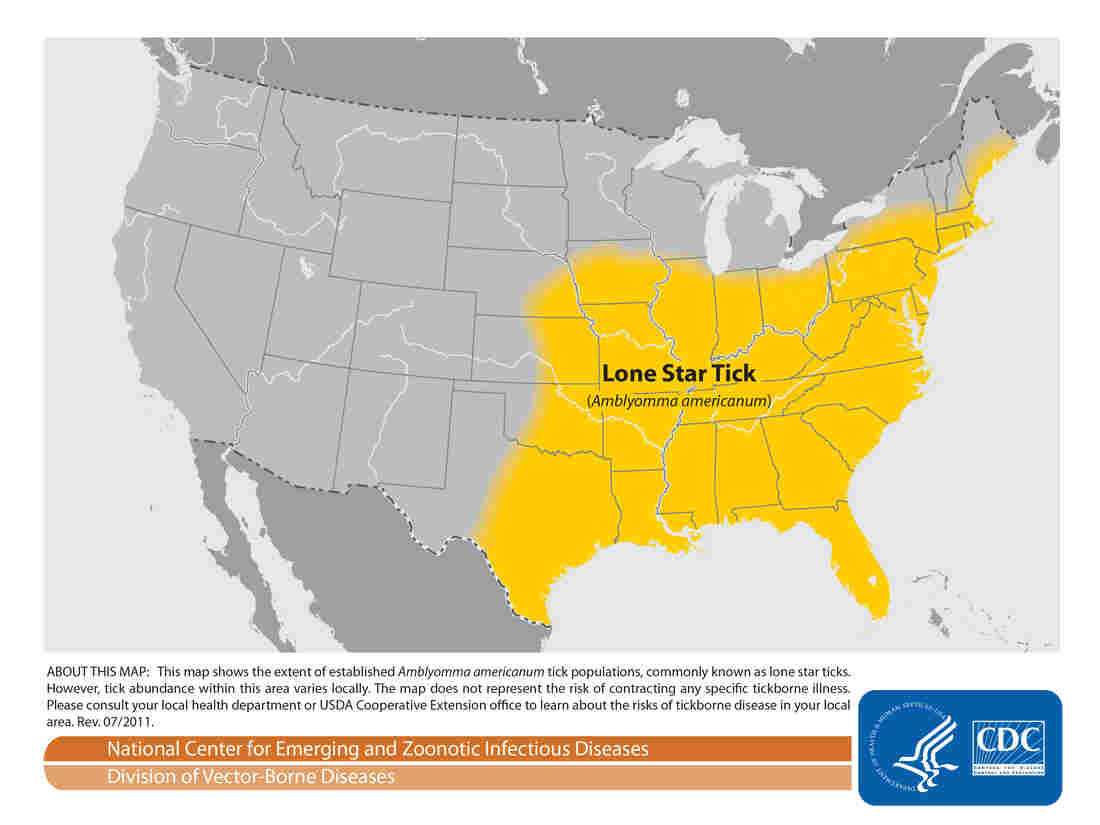 A map of the distribution of Lone Star ticks in the United States. Centers for Disease Control and Prevention hide caption 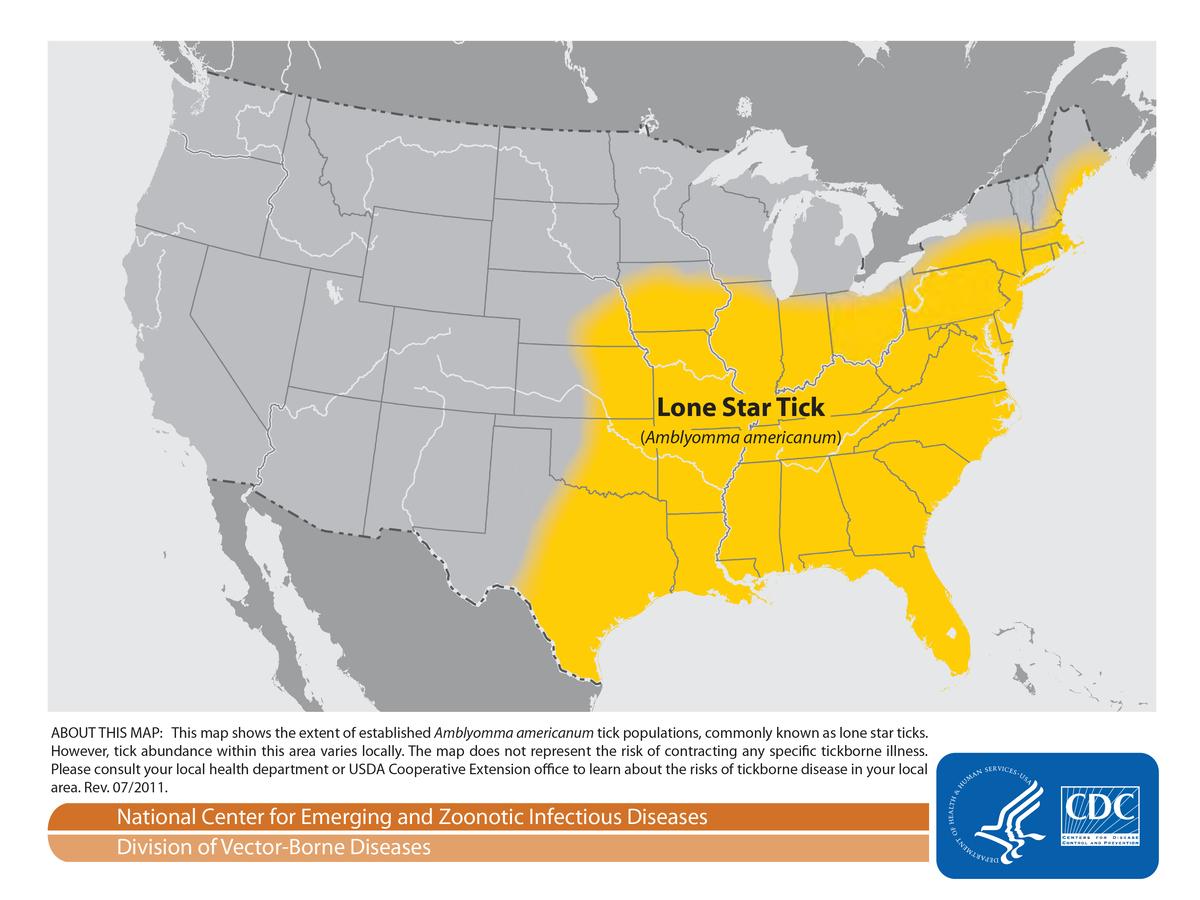 A map of the distribution of Lone Star ticks in the United States.

In the U.S., the Lone Star tick has expanded its range beyond the Southeast, and there are documented cases of alpha gal meat allergies farther north — including New York, Maine and Minnesota.

"The range of the tick is expanding," says Commins. So is awareness about the red meat allergy it can cause. "We have a blood test, and the word is getting out."

Commins first began trying to solve the mystery of what was causing a red meat allergy in 2007, when he was at a University of Virginia allergy clinic. "We had a growing population of people reporting these reactions [to meat]," he recalls.

Early on, ticks were not on his radar. "We thought it was a parasite," Commins explains. But then he and his colleagues realized that many of the patients were outdoorsy types who spent time hiking. And eventually they pieced together the tick bite connection.

One hint came from mapping newfound cases of the meat allergy. When he compared that with the geographic distribution of Rocky Mountain spotted fever, also caused by the Lone Star tick, he saw striking similarities. "That map overlapped very nicely with the states where we were finding these emerging reactions to beef, pork and lamb," he says.

There's still a lot to learn about the alpha-gal allergy. Alpha gal is a sugar that animals — including cows, pigs and lamb — make in their bodies. "As humans, we don't make this alpha gal sugar," Commins explains. "We all make an immune response to it." So, how does a tick bite cause the allergy?

"Whatever the tick is doing, it seems that it's a very potent awakener for our immune system to produce antibodies, "Commins says. "And in this case, it's antibodies to this very particular sugar in red meat."

Laura Stirling now avoids all red meat and dairy. "As soon as I stopped, I was fine, I felt great," she says.

"I get enough poultry and seafood in my diet," she says, so she's not pining for beef. And with all the nondairy options now available, she says it's not hard to avoid milk. "But I kind of miss having, you know, a bowl of ice cream or really good cheese."

She looks forward to the day when she may be able to eat foods such as prosciutto and salami — and ice cream — again. And there's a good chance she will outgrow the allergy.

"It can resolve," Commins says. But he adds a caveat: "We need people to avoid additional tick bites for the allergic response to wane." For people who like to be outside, this can present a challenge.