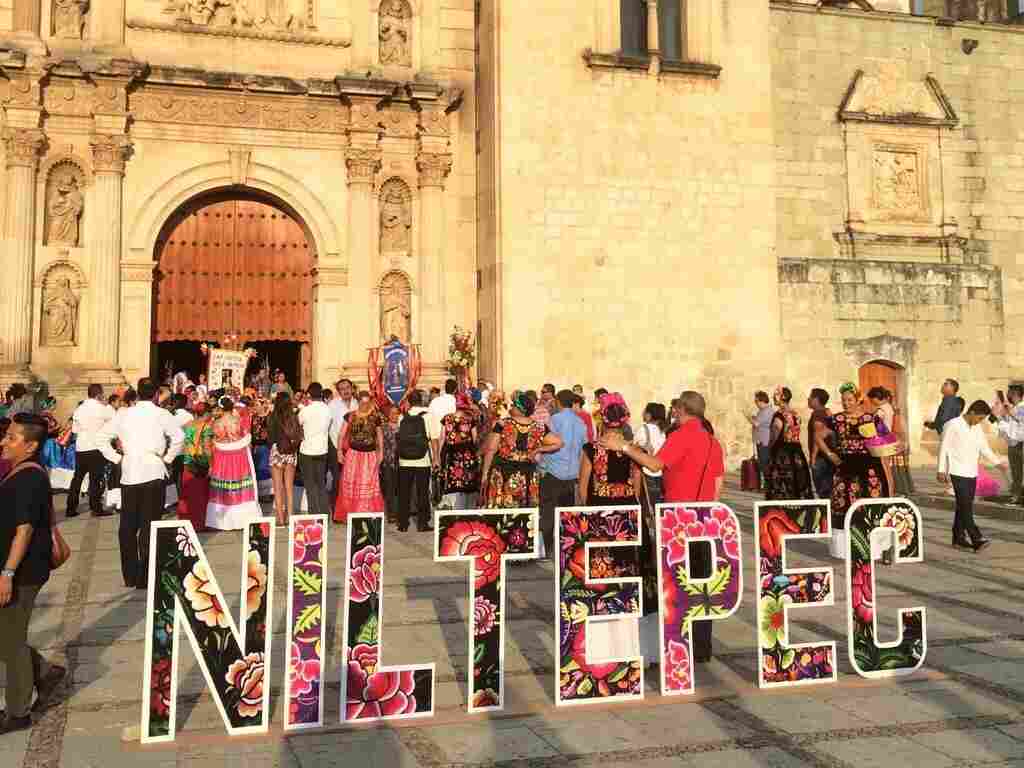 Crowds descend on the town square outside the historic Santo Domingo de Guzmán Catholic Church in Oaxaca City, the capital of Oaxaca, Mexico, for an annual festival to celebrate James the Apostle, patron saint of the town of Niltepec. Surrounding this bucolic scene was a different story: It was teacher's strike season – the bane of Oaxaca's restaurateurs. Gustavo Arellano/for NPR hide caption 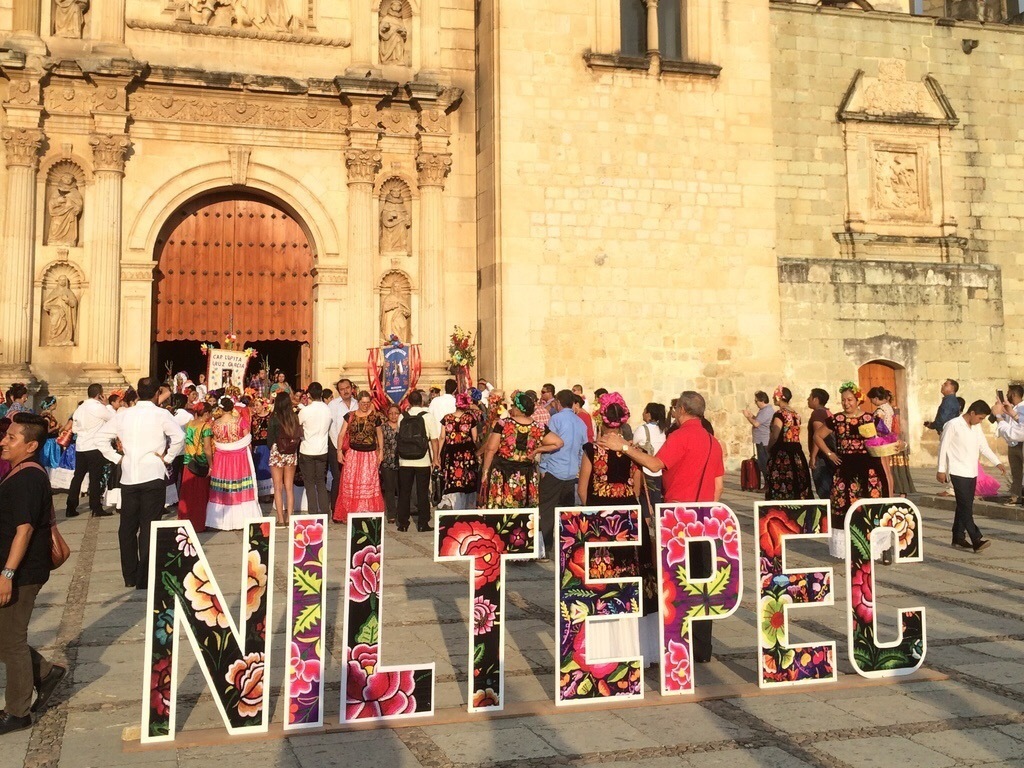 Crowds descend on the town square outside the historic Santo Domingo de Guzmán Catholic Church in Oaxaca City, the capital of Oaxaca, Mexico, for an annual festival to celebrate James the Apostle, patron saint of the town of Niltepec. Surrounding this bucolic scene was a different story: It was teacher's strike season – the bane of Oaxaca's restaurateurs.

A booming brass band greeted parishioners as they exited the historic Santo Domingo de Guzmán Catholic Church in Oaxaca City on a recent Friday afternoon. Street vendors hawking everything from roasted corn to textiles looked on as women emerged from the Baroque parish dressed in the style of the tehuanas, the women of Oaxaca's Isthmus of Tehuantepec celebrated in Mexican culture for their beauty, entrepreneurial know-how, and colorful blouses. (The fashion's most famous fan: the artist Frida Kahlo, whose mother was from the region.)

It was the southern Mexican state at its picturesque best, and befitting of Oaxaca City's colonial-era downtown, which got a "36 Hours In..." feature in The New York Times earlier this spring. But surrounding this bucolic scene was a different story: It was teacher's strike season — the bane of Oaxaca's restaurateurs.

Every summer for decades, members of Section 22, the Oaxacan branch of Mexico's teacher's union, National Coordinator of Education Workers (known in Spanish by its acronym, CNTE), have called for a general huelga to protest what they say are terrible working conditions for teachers in one of Mexico's poorest states.

Foreign visitors took everything in stride this year. But the current plantón (occupation) hasn't stopped restaurateurs and others involved in Oaxaca's tourism industry from privately fuming.

Oaxaca is fiercely protective of its downtown. In 2002, politicians voted to bar McDonald's from opening a location in the zócalo — a move that made international headlines. But the struggle between restaurateurs and teachers comes as Oaxaca's traditional tourism season kicks off, and about a month and a half before the Guelaguetza. The annual showcase of Oaxacan indigenous culture is celebrated across the state, but its marquee event is held over two weekends in a hilltop stadium that offers breathtaking views of the city below.

Earlier in the day of the Santo Domingo celebration, protestors took over a tollbooth on the main federal highway that leads to Oaxaca City. They blockaded Xoxocotlán International Airport. Travelers who tried to go in either had to get a military escort through a nearby base or walk almost two miles to the gates.

Meanwhile, a tent city had taken over about 10 blocks around the historic zócalo (town square), about a 10-minute walk from Santo Domingo. Tarps created makeshift quarters; strikers stacked sleeping bags and tables in front of businesses, museums, churches and other tourist attractions.

It's a better scenario than in 2006, when thousands of riot police brutally cleared out the zócalo after months of a plantón, leaving over a dozen people dead. And it's calmer than even two years ago, when clashes between teachers and police led to at least six deaths in the nearby city of Nochixtlán.

The state heavily relies on outsider money: A 2018 report by Sectur (Secretariat of Tourism) showed that travel to Oaxaca brought in 1.18 billion pesos (about $59 million), with 401 million pesos spent in the capital alone. The number of visitors has increased 15 percent since 2015, with about nearly 40 percent of foreigners from the United States.

Adventurous Americans have long dropped into the state, drawn by its rustic charms and well-kept ancient temples in Monte Alban and Mitla. But Oaxaca has exploded in the American imagination in recent years thanks to its foodways, which draws on indigenous and Spanish traditions to create something unlike anything else in Mexico: moles that range from green to black to coloradito ("little red"), edible ants and crickets, and milky cheese called quesillo.

Home chefs have made cameos on the television shows of the late Anthony Bourdain, Andrew Zimmern, Rick Bayless and other celebrity chef shows over the past decade. In 2015, Guelaguetza Restaurant in Los Angeles made history as the first traditional Mexican restaurant to ever win a James Beard America's Classic, the organization's version of a restaurant Hall of Fame.

Meanwhile, the state's native liquor, mezcal, is booming in American craft bars. A 2017 story by Quartz revealed that sales of tequila's smokier cousin in the United States went from $10 million in 2005 to $126 million in 2015, with 94 percent of production centered in Oaxaca. Such a boom led six municipios (the Mexican equivalent of a city-county) in 2015 to establish the Caminos de Mezcal (Mezcal Trails), a self-guided tour, complete with highway signs, that takes visitors to palenques (distilleries) across the state.

The yearly teacher's strikes threaten all of this, according to Pedro Corres Silla, president of Canacope, Oaxaca's version of a Chamber of Commerce.

"We were prepared to endure a few days," of the strike, he told the Oaxacan daily NOTICIAS. "But the mobilizations have been extended, [and] the situation begins to be risky for the merchants."

He further complained that as long as "there is blackmail and demonstrations, Oaxaca will never get ahead."

Teachers approached for an interview declined to comment; a request to Section 22 for an interview was not returned. But strikers in the past have dismissed criticisms that their actions hurt Oaxaca's restaurants, with one telling the Los Angeles Times in 2016 that those affected were "mostly bourgeois establishments."

The local media, however, has complained loudly about the strike. Oaxaca's biggest daily, El Imparcial (The Impartial), has particularly savaged protestors, printing photos of what they say are piles of teacher trash. Earlier this month, they published an article tellingly titled in Spanish "Restaurateurs in Oaxaca's Center Can't Bear it Anymore," not even bothering to identify what "it" was, since they knew their readers knew. The article quoted a restaurant owner who called the occupation a "kidnapping" and claimed that his business was just 20 percent of normal.

"The teachers don't eat in our restaurants...and our work is at risk" an unnamed waiter told the paper, as El Imparcial described him as "busily convincing some people to enter the restaurant."

One American who has seen what the strikes do to Oaxaca City's culinary tourism is Sarah Portnoy, associate professor of Spanish at the University of Southern California and author of the 2016 book "Food, Health, and Culture in Latino Los Angeles," which discusses Oaxacan foodways in the City of Angels. She has visited Oaxaca multiple summers since 2006, when Portnoy went on her honeymoon and saw that year's months-long blockade up close.

This year, the professor took students on a three-week tour of the state and city just as the strike was starting, visiting palenques and small villages. They encountered few major obstacles other than traffic jams. But that's not how it's always been for Portnoy.

"Two years ago, my husband and I were" at a restaurant near the Zócalo, she said. "We were the only ones in the restaurant, and the chef was lamenting that he couldn't get his ingredients through because of blockades on the highways into Oaxaca."

Portnoy says regular oaxaqueños do have "sympathy for the teachers and their struggles." Some of them include increased classroom sizes, a push by the Mexican government to introduce private funds into the country's education system, and a demand that teachers take a competency exam every four years in order to keep their jobs. But "if the strikes are bad," Portnoy says, "tourists stop coming. Restaurants can barely afford to operate."

Restaurateurs asked for comment for this story declined to be identified, citing fears of retribution by Section 22. But one prominent chef who has spoken out in the past is Rodolfo Castellanos, owner of the high-end Origen, which stands just steps from the Zócalo. He won the premier season of Top Chef Mexico in 2016, and returned to an empty restaurant thanks to that year's strike.

Castellanos didn't necessarily oppose the teachers, but bitterly complained about the drop in customers. "If they don't produce, if they don't create, well, don't take [our business] away," he told the Mexican business montly Alto Nivel. "A month and a half is too much. It's like being closed. If customers see teachers lying on the ground and tarps covering everything, they'll go [elsewhere]."