Accessibility links
Microbial Magic Could Help Slash Your Dinner's Carbon Footprint : The Salt In one year, fertilizer production in the U.S. emitted as much carbon dioxide as two million cars. What if we could help plants make their own nitrogen so they wouldn't need man-made chemicals? 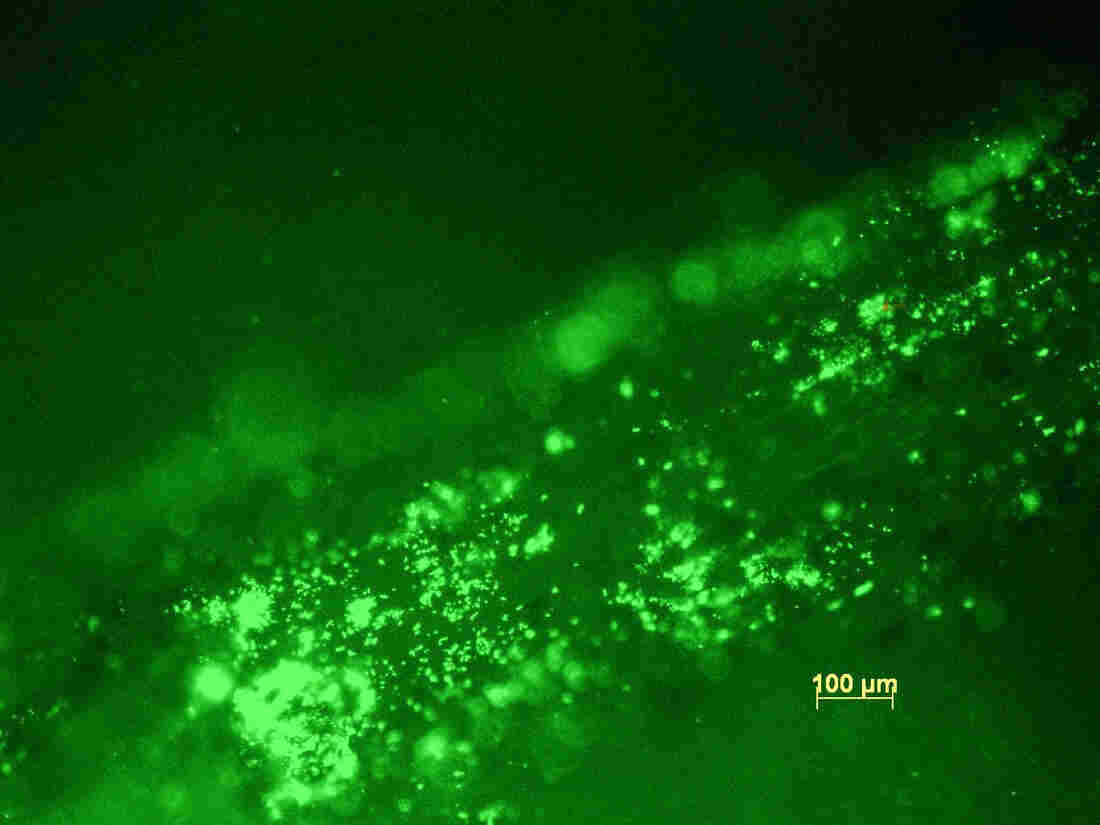 Endophytes are microbes that live inside plants — the ones tagged with a fluorescent dye in this image are found in poplars. The microbes gather nitrogen from the air, turning it into a form plants can use, a process called nitrogen fixation. Researchers are looking at how these microbes could be used to help crops like rice and corn make their own fertilizer. Sam Scharffenberger hide caption 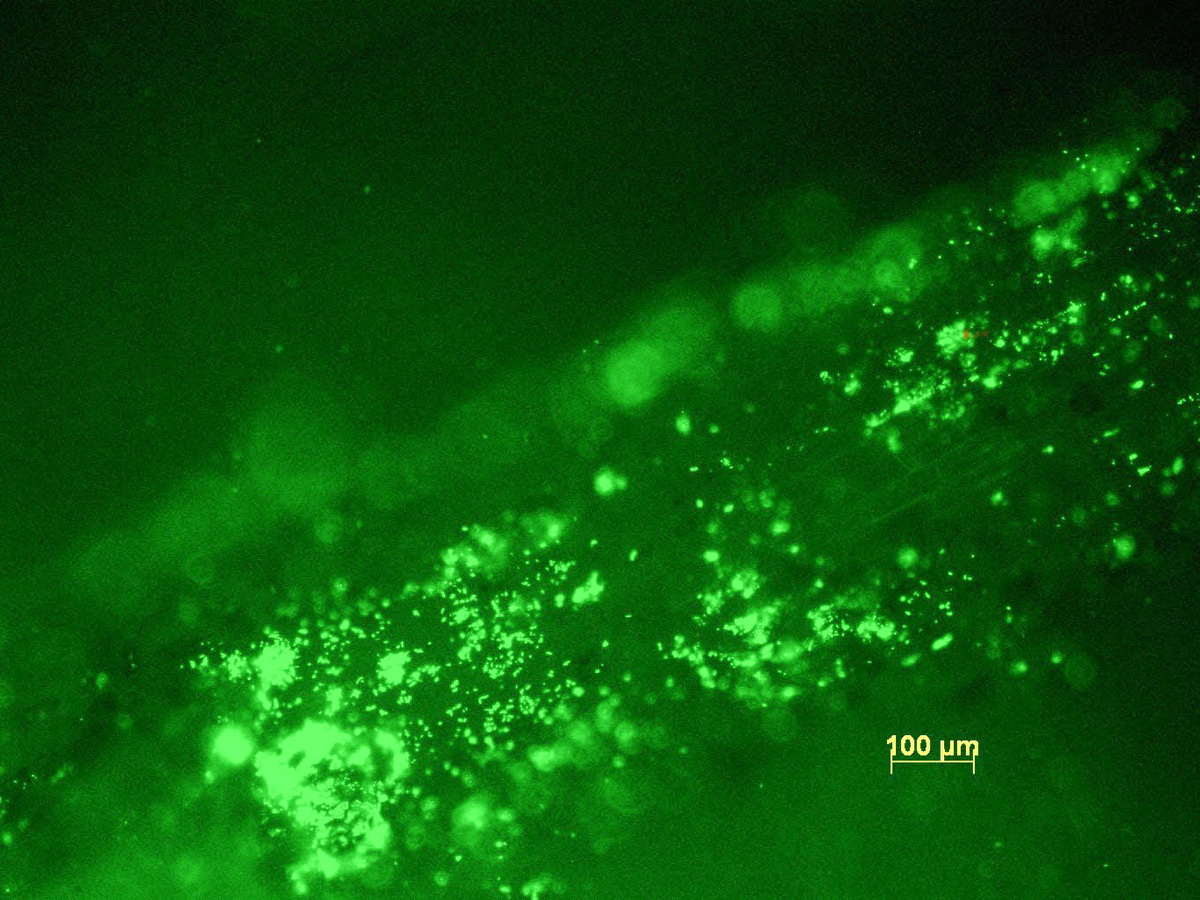 Endophytes are microbes that live inside plants — the ones tagged with a fluorescent dye in this image are found in poplars. The microbes gather nitrogen from the air, turning it into a form plants can use, a process called nitrogen fixation. Researchers are looking at how these microbes could be used to help crops like rice and corn make their own fertilizer.

If you're interested in sustainability, you've probably thought about how to reduce your carbon footprint, from how you fuel your car to how you heat your home. But what about carbon emissions from growing the food you eat?

In a single year, production of fertilizer in the United States emitted as much carbon dioxide as two million cars. But plants need nitrogen to survive, so farmers can't just stop using fertilizer. Without it, U.S. crop yields would fall by as much as 50 percent, according to some estimates.

What if we could help plants make their own nitrogen so they wouldn't need manmade chemical fertilizers? Professor Sharon Doty, a plant microbiologist at the University of Washington, says nature has already figured out this problem — we just have to know where to look.

Can Anyone, Even Walmart, Stem The Heat-Trapping Flood Of Nitrogen On Farms?

"Look outside," she says. "Go to a natural environment and there are many cases where you can see plants that are thriving in rocks and sand – very nitrogen-poor environments."

Doty started by looking at willow and poplar trees living in river systems in Washington state. These rivers are fed mostly by snow melt and are extremely low in nitrogen. "It's long been known that poplar and willow are pioneer species," Doty says. "But [other scientists] say, 'Oh, they're just really efficient.' But there's nothing to be efficient with! There's nothing there!" 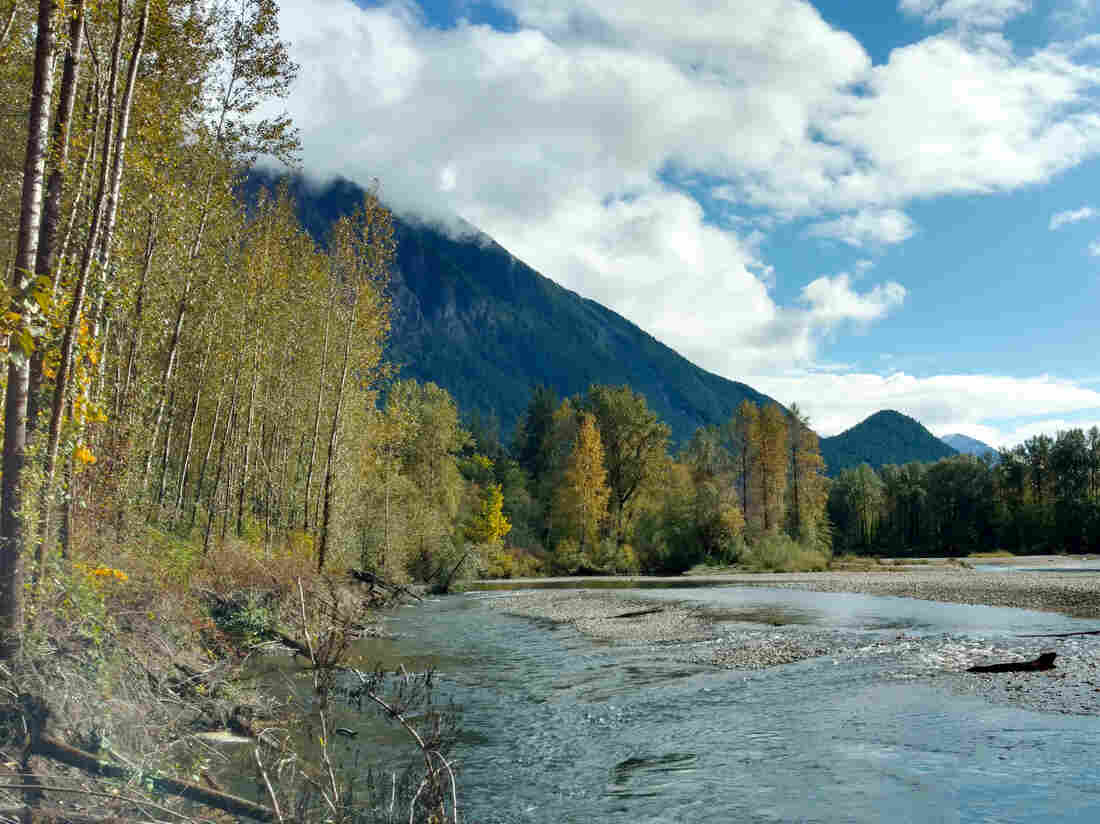 Poplar trees at the Snoqualmie River in Washington State. The river is fed mostly by snow melt and is extremely low in nitrogen, yet the trees thrive thanks to endophytes. Sharon Doty hide caption 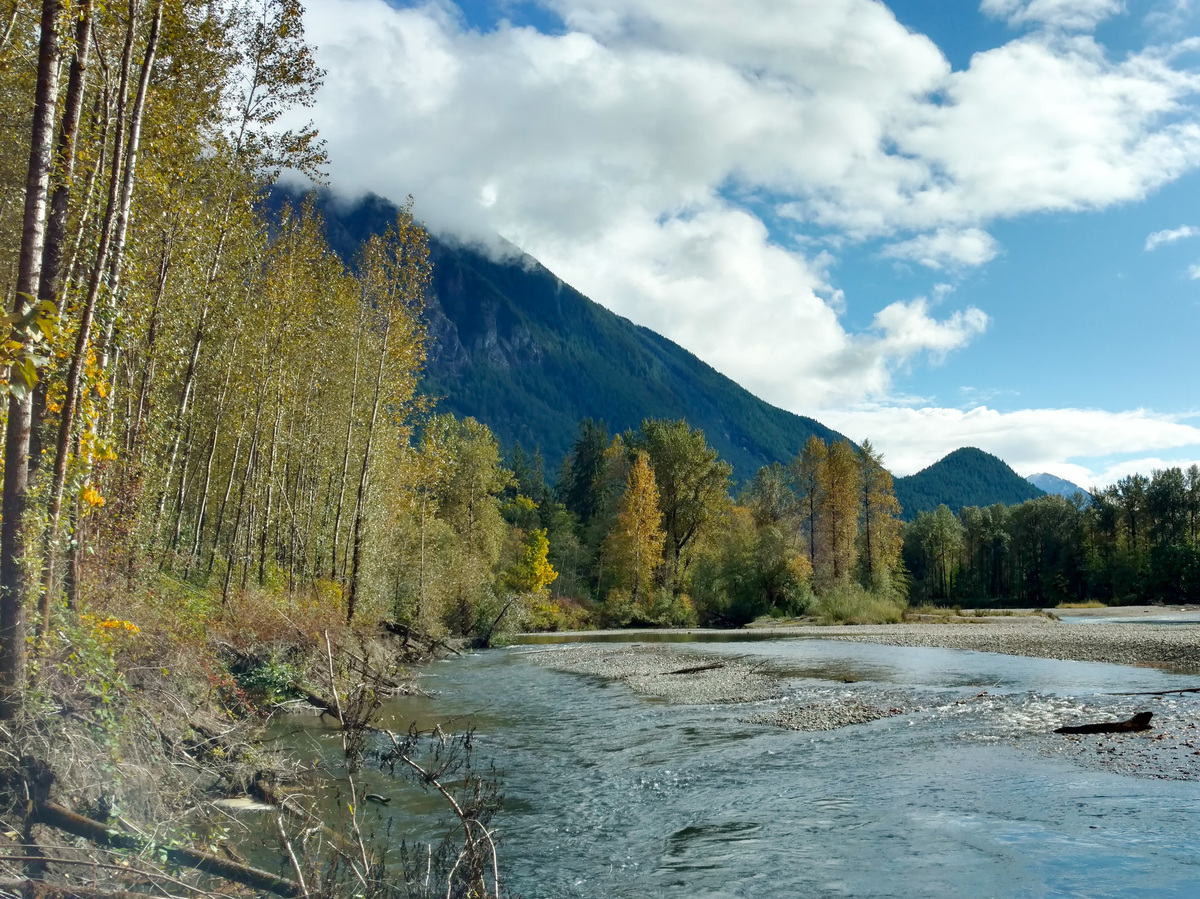 Poplar trees at the Snoqualmie River in Washington State. The river is fed mostly by snow melt and is extremely low in nitrogen, yet the trees thrive thanks to endophytes.

Trees can't conjure nitrogen from thin air, but microbes can. Many microbes have a special enzyme they use to gather nitrogen from the air and turn it into a form that plants can use, a process called nitrogen fixation. Doty wondered if the microbes, called endophytes, living inside the trees might be helping them get nutrients.

Sure enough, when Doty's lab examined the DNA of those endophytes, they found genes indicating that the microbes could fix nitrogen. The implications were not lost on Doty. "Since these [endophytes] can fix nitrogen so effectively in wild poplar," Doty wondered, "can we use them for sustainable agriculture?"

Doty and her team knew the endophytes could work their nitrogen magic in a few tree species. But they weren't sure if the same trick would work in other plants, including crops such as corn and rice, which are physically and genetically quite different from wild poplar trees. The researchers took crop seedlings and soaked them in a bath containing endophytes from the poplar trees, then waited to see how the seedlings would grow.

For many species, the endophytes seemed to give seedlings a competitive advantage. Rice plants with added endophytes had larger roots and leaves than those without endophytes. Even more surprisingly, some species of tomato and bell pepper nearly doubled the amount of fruit they produced. 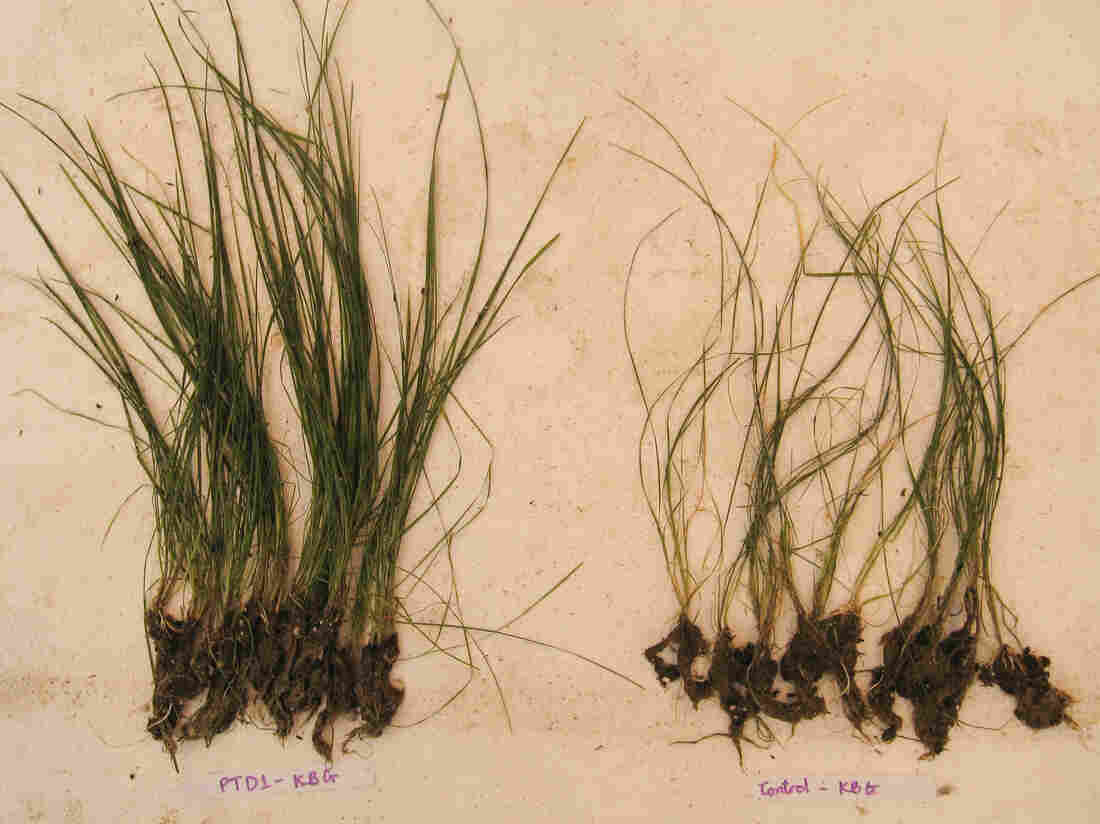 In Doty's lab, grasses grown with endophytes from a poplar tree (left) grew larger than those without the added microbes. Sharon Doty hide caption 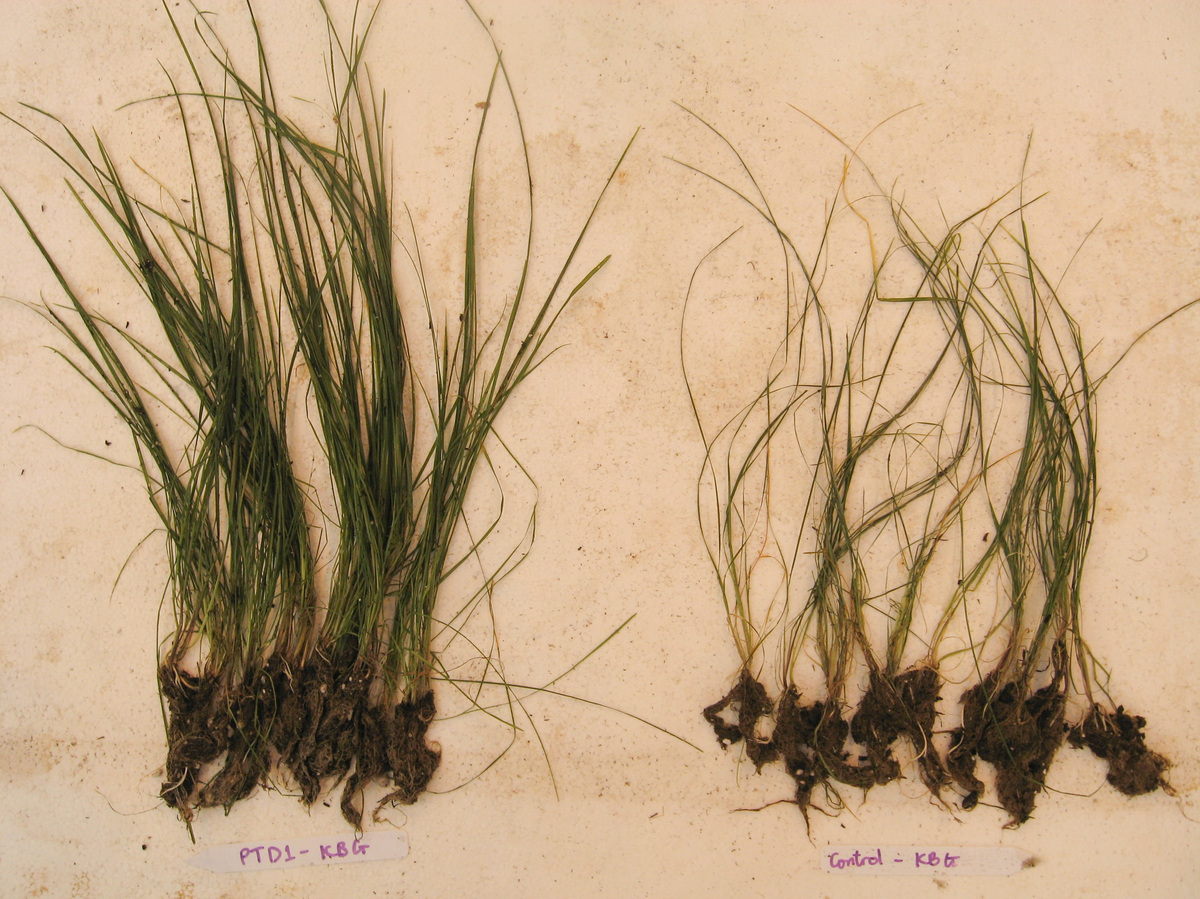 In Doty's lab, grasses grown with endophytes from a poplar tree (left) grew larger than those without the added microbes.

While the results are promising, success in the lab doesn't always translate to the messier world of large-scale commercial agriculture. Scientists must be able to grow microbes cheaply and plentifully. Previous attempts to develop beneficial microbes for large-scale agriculture have failed due to production costs.

Growers also need to trust the new technology enough to risk their yields for the year. For example, BioGro — a biofertilizer composed of several strains of beneficial microbes — has been effective in the growth of rice plants. But farmers have been slow to adopt it, and as a result, fewer than half of the firms producing BioGro have stayed in business for more than two years.

Shelf-stability is also a problem: Farmers seem to prefer buying seeds that have already been coated with microbial products that need to remain viable even when seeds are stored for months or years.

What's more, unlike traditional fertilizers, which can be used on any type of crop anywhere in the world, endophytes aren't a one-size-fits-all solution.

Environmental factors, like the presence of pesticides or the native soil microbiome, can also negatively affect the success of nitrogen-fixing microbes

Dixon says there's still a lot of work to be done before these microbes could fully replace traditional fertilizers. "I don't know whether it will be developed right across the corn belt in the U.S.," he says. "That's probably not going to happen in the immediate future."

However, labs across the globe are working on these issues. Researchers are trying to determine the optimal conditions for cheaply mass-producing these microbes. Experiments with other types of microbes suggest that industrial by-products like molasses (which comes from processing sugarcane or sugar beets) or starch wastewater (which comes from processing foods like wheat and potatoes) could be used to grow beneficial microbes.

Scientists have also identified endophyte species that are beneficial for canola, corn, sugarcane, and switchgrass (a bioenergy crop); field experiments are now taking place all across the world, from Ireland to Egypt to Brazil.

The startup Pivot Bio has already developed nitrogen-fixing microbes for use with corn. However, Pivot Bio's microbes function slightly differently. Unlike endophytes, which live inside a plant, the Pivot Bio microbes live on the surface of the roots. While these microbes can't totally replace nitrogen fertilizer, they can at least reduce the amount that farmers have to use.

"Based on over five years of experiments at 5,000 field trial plots across 100 locations," says a spokesperson for Pivot Bio, "we have data that shows Pivot Bio's microbes replace up to 25 pounds of applied synthetic nitrogen fertilizer per acre in U.S. corn fields."

Pivot Bio recently announced the pre-commercial launch of its nitrogen-fixing microbes. Corn farmers across the Midwest will put the microbes to the test in large-scale field trials this spring and summer. Results should be available by the end of the year.