Accessibility links
Surf And Turf: To Reduce Gas Emissions From Cows, Scientists Look To The Ocean : The Salt When cows burp, they emit the potent greenhouse gas methane into the atmosphere. But by adding seaweed to the cows' diets, researchers are noticing a dramatic reduction in methane production. 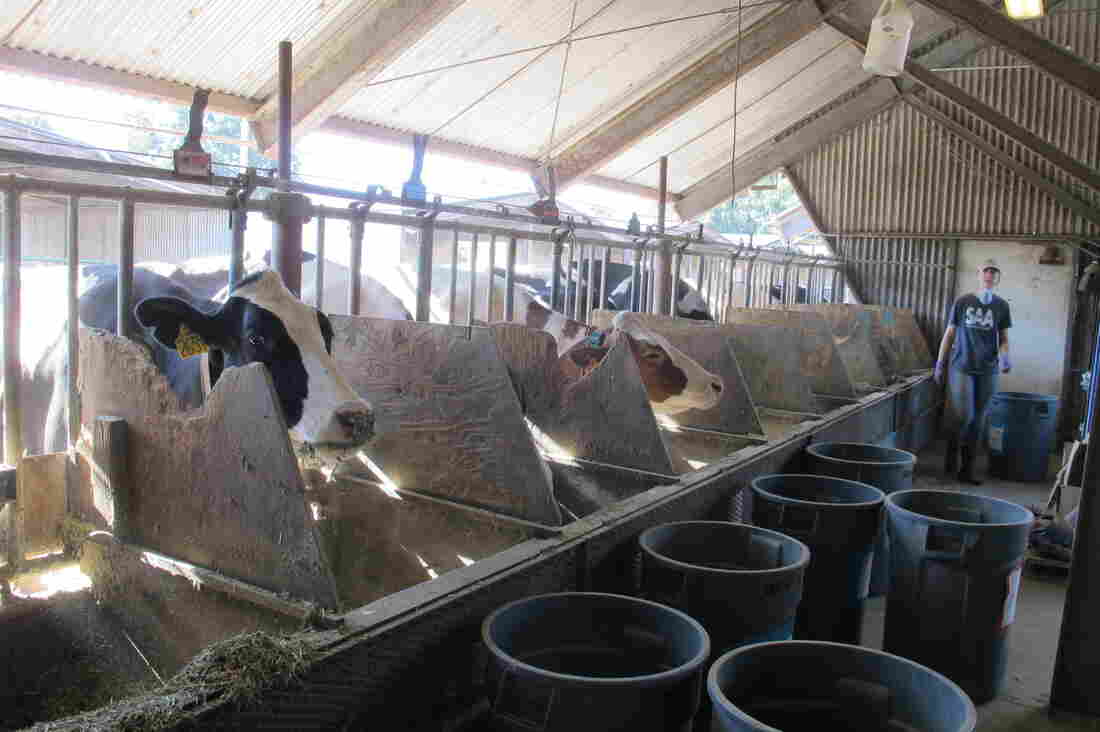 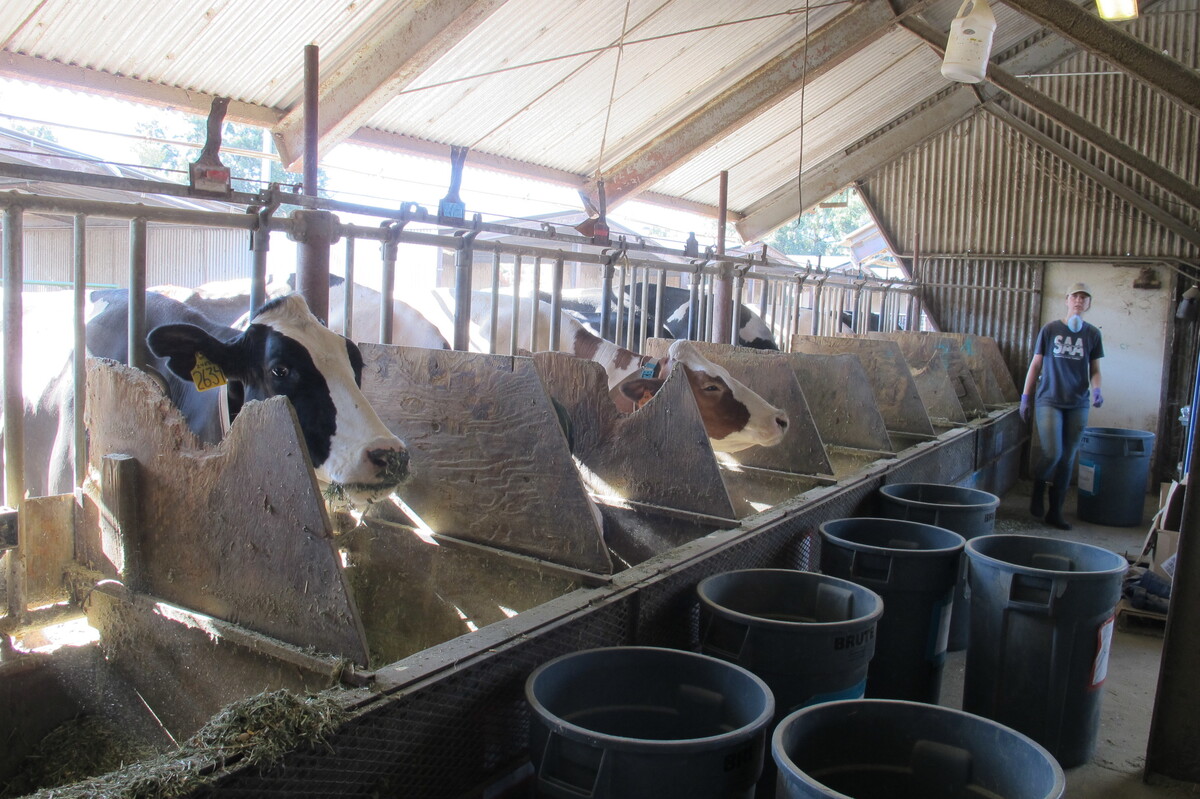 Researchers at the University of California, Davis are testing whether adding seaweed to cows' feed reduces methane emissions.

Scientists think they can reduce greenhouse gas emissions by tweaking the food that cows eat. A recent experiment from the University of California, Davis suggests that adding seaweed to cattle feed can dramatically decrease their emissions of the potent gas methane.

Livestock is a major source of greenhouse gases worldwide. About quarter of the methane emissions due to human activity in the U.S. can be chalked up to gas released from these animals, according to the U.S. Environmental Protection Agency.

There's a pen at the University of California, Davis, where scientists were closely observing 12 research cows on a recent morning. Each animal is known by a four digit number — except for the friendliest one.

"We just call her Ginger, she's the only one with a name," laughs graduate student Breanna Roque.

On this morning, Roque is mixing up breakfast for the research cows. She's pulling out dark, gooey clumps of a seaweed species called Asparagopsis armata.

"I'll sprinkle it in, I'll kind of rub it together with the hay, mix it around, and then we actually come through and pitchfork the whole ration," she says.

Roque adds a little bit of molasses, too, which the cows seem to appreciate. She mixes it all thoroughly because some cows don't like the salty seaweed taste. As animal science professor Ermias Kebreab, who is leading the experiment, puts it: "It only works if they consume it."

Kebreab says that as cows digest their fibrous food, methane is produced by microbes in the rumen, the first chamber of the cow's four-part stomach, in what he calls a "natural process of fermentation." It's kind of like how yeast produces carbon dioxide in beer.

The cows then burp that methane out, into the atmosphere. He says belches are a bigger problem than farts: "Over 95 percent, actually, is from the mouth, from the front end of the cow."

Kebreab says they're hoping that the seaweed can inhibit an enzyme that's involved in producing methane in a cow's gut, a chemical reaction discovered by researchers in Australia.

U.S. May Be Producing 50 Percent More Methane Than EPA Thinks

To test the theory, the researchers divided the cows into three groups. One of the groups received a "high dose" of seaweed, amounting to 1 percent of its feed. Another received half that, and the final group received no treatment.

The cows lumber up, each heading to its own specially prepared meal. They've been taught to come to the same stall every time to feed, unlocking it with a yellow sensor dangling around their necks. Roque says: "When it has to do with feed, they can be trained."

To test whether the seaweed is working, the cows use a kind of breathalyzer at least three times a day, where they eat a cookie as they stick their heads into a machine that measures the gases in their breath. 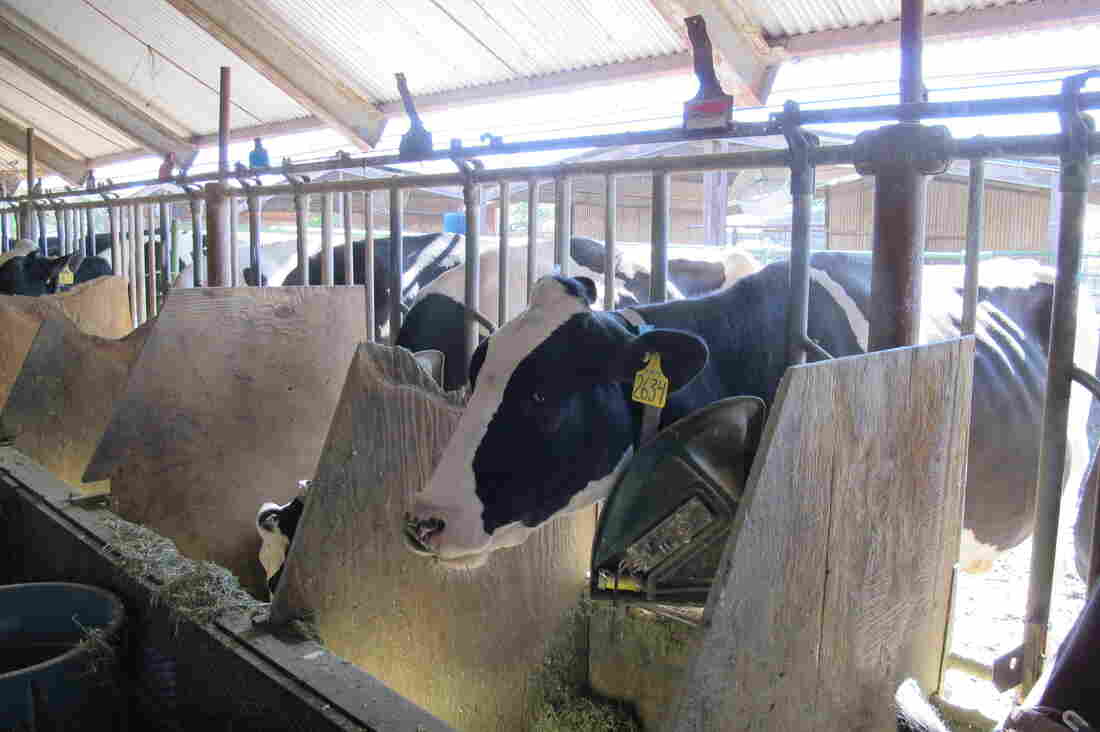 The scientists found a dramatic reduction in methane emissions from the cows that ate seaweed. Merrit Kennedy/NPR hide caption

This is the third time they've run the experiment, each for a period of two weeks. Kebreab says they noticed a difference in emissions right away. "The results are almost immediate. You give [it to] them this day, and the next day you see the reduction."

And the drop in methane was even more than they expected. He remembers the first numbers coming in. "When Breanna was sending me these results, I was like, are you sure?" Kebreab says.

Their experiment found that the high dose of seaweed reduced methane production by more than half, what he describes as a "dramatic reduction in methane emissions."

At the high dose of seaweed, the researchers also noticed a small drop in the amount of feed the cows were eating and the amount of milk they were producing. "It's basically the palatability issue. It's something that they haven't had before, and when you have it at 1 percent they smell it. It smells like the ocean, I guess," says Kebreab. "That's why our next work is going to be how to deliver the seaweed so they don't notice it."

The researchers recently presented their findings at the annual meeting of the American Dairy Science Association in Knoxville, Tenn.

Another crucial question that the team worried about is whether the seaweed diet would change the taste of the cows' milk. Even with a dramatic reduction in emissions, most people aren't looking for a salty umami twist in their milkshakes.

So they brought in 25 panelists for a blind taste test. Joan King Salwen is a founder of Elm Innovations, a nonprofit trying to explore the adoption of this technology if it proves scientifically sound. "The panelists report no 'off-notes' – no unexpected flavors or odors," Salwen says. "It was certainly a relief that the sample milk tasted just like milk, rather than seaweed or salt or fish!"

The researchers even tasted ice cream made out of the milk, which Salwen says was delicious.

This emissions news could be particularly helpful for the livestock industry in California, where the state has introduced a plan that aims to cut methane emissions by 40 percent from 2013 levels by 2030.

There's still a long way to go before the seaweed treatment can be implemented at scale. The scientists are analyzing whether the seaweed changes the nutritional content of milk. They're also planning an experiment over a longer time span, this time with beef cattle instead of dairy. Kebreab says it will aim "to understand the long-term effects of seaweed on the health of the animals and the productivity of the animals."

And if all goes well, scientists and the livestock industry will have a new puzzle: What's the best way to grow a whole lot of seaweed?

"There's a great deal of work that needs to be done looking at the scaling up of growing Asparagopsis as a crop," Salwen says. "There always are unintended consequences of large-scale business innovations." Because the point of this research is to help the environment, she says they want to be sure to avoid inadvertent side effects, such as harming ocean ecosystems or creating additional emissions from shipping.

And should the seaweed treatment become widely adopted, Salwen wants to make sure that farmers themselves do not end up bearing the full cost of "providing something that is in our common and shared interest."