Accessibility links
Native Bees And Northwest Alfalfa Farmers Form Productive Partnership : The Salt Northwest farmers produce a quarter of the country's alfalfa seeds, but they get help from millions of alkali bees, thanks to one of the most unique agricultural partnerships in the country. 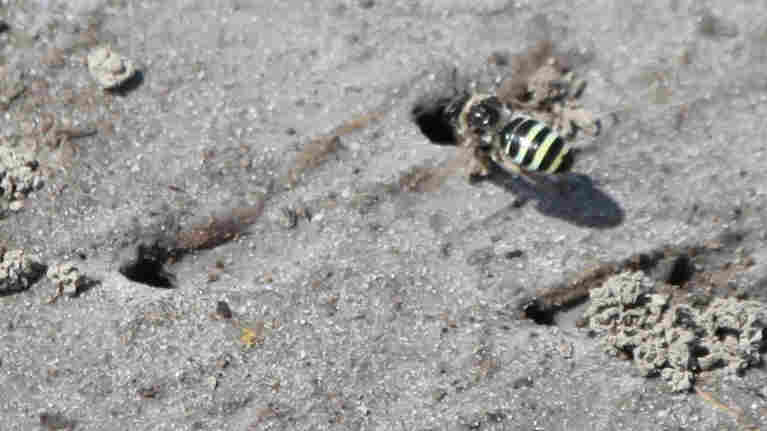 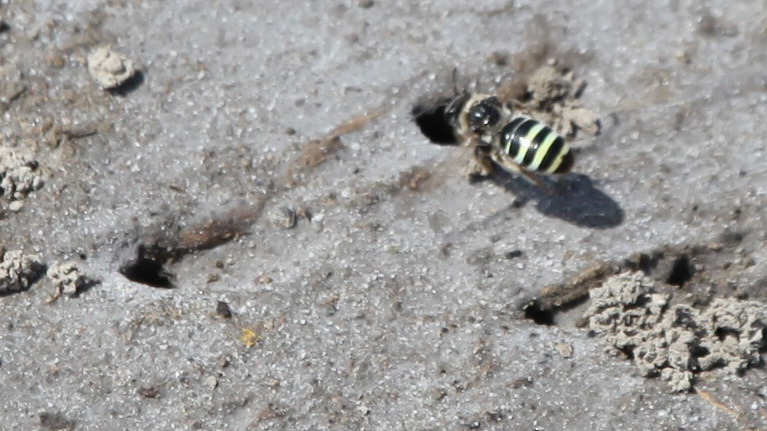 The alkali bee is slightly smaller than a honey bee, with opalescent stripes that shimmer between yellow, green, red and blue.

Walla Walla County in Washington state might just be the only place on Earth where you have to brake for bees.

"You can see the signs here," says Mike Ingham, as he drives by a 20 mph speed limit sign with a smaller one below stating "Alkali Bee Area."

"There's actually a county ordinance to slow the cars down who go by here, because a speeding car can kill a lot of alkali bees," Ingham says.

Mike Ingham is a third-generation alfalfa seed farmer outside Touchet, Wash. His family is one of about a dozen in the Walla Walla Valley responsible for producing a quarter of the country's alfalfa seed. That's a quarter of what's grown into one of America's biggest crops — and one that feeds cows and livestock the around the world. That might sound staggering, but they don't do it alone: They have millions of tiny, native helpers, thanks to one of the most unique agricultural partnerships in the country.

"This is a really new bee bed, and it is really taking off," Ingham says, as he drives alongside what initially looks like a barren hillside of parched earth, surrounded by lush, flowering alfalfa fields. But a closer look reveals it's not barren at all: It's the bee equivalent of high-density condos. Bees are crawling in and out of thousands of tiny holes.

"If you look up over the horizon there, you can see there's just a fog of bees," he says, pointing to the top of the hill. "Nowhere else in the world will you see this."

The partnership between the farmers and the alkali bees was born out of necessity, with a healthy dose of luck. After the spring snow melt runs out, this stretch of arid land straddling the Washington-Oregon state line gets basically no water throughout the summer. As a consequence, most acres in the area, 22,504 to be exact, grow alfalfa seed, rotated with wheat, because neither requires summer water. The seed is then sold to other farmers to plant as alfalfa hay to the tune of $42 million, according to the Washington State Department of Agriculture.

When American farmers need pollinators, most ship in European honey bees. But honey bees are total cheats when it comes to pollinating alfalfa's purple blossoms. They hate the way the stamen bops them on the head when they trip the flower, so they sneak in from the side and steal the nectar without pollinating in return.

Alfalfa seed farmers elsewhere buy leafcutter bees from Canada instead, which happily trip the flowers but are quite expensive. But even they are no match for the native alkali bees, with their mesmerizing iridescent stripes, who range 3-to-5 miles per trip and pollinate alfalfa blossoms like evolutionary professionals.

"What we can boast is that these alfalfa seed growers here have yields on a per-acre basis 50 percent greater than anywhere else that alfalfa seeds are produced in the western United States," says Doug Walsh, an entomologist at Washington State University who works closely with the region's farmers. "It's just a beautiful system. It's neat that we figured out how to make it work."

One of Marsh's predecessors first noticed alkali bees' talent for pollinating alfalfa in the 1950s and began working with farmers to commercialize it. Like many native bees, alkali bees nest in the ground, preferring salty, moist soil. So some farmers started with ditches at the top of salty slopes, so the water would seep down. Others tried trenches full of rocks, soil, straw and water. In recent years, they've refined a system of pumps and perforated PVC pipes that run under the ground, which they then cover with tons of table salt.

"We learn what works and what doesn't work," says Ingham's son, Patrick. "We're such a minority of farmers that do this thing that we're all left to work together to make it better."

For the Inghams and their neighbors, cultivating the bee beds has become a way of life handed down and improved on through generations. Tim Wagoner says one of the first jobs his dad gave him when he was little was scaring birds away.

"When the bees come out of the ground, the bees are all wet and they can't fly, and they got to sit out here like a little salamander on a rock trying to get warm, and the starlings will come in and gobble them up," he says. "Ever since I was a kid, you're always excited to come see the bees, and watch them progress and work on the bee beds and expand and do different things."

So while farmers throughout the West have plowed up the ground where alkali bees nest for crops or have inadvertently eradicated them with insecticides, the farmers here have expanded their beds over the decades, at a cost of thousands per acre, and now house a steady population of 18 million bees.

Which isn't to say it's always been sunshine and alfalfa blossoms. There have been die-offs in the past due to heavy rains and pesticide use. But with the help of Walsh, who tests for the least toxic pesticides, the region's farmers have developed a successful integrated pest management program over the past 10 years that involves only spraying when the harmful insects outnumber the beneficial ones by a certain ratio. And they spray only at night when the bees are asleep in their holes. Walsh is also developing remote sensors in the beds to better predict when the bees will first emerge each spring, so farmers can alter their spraying to bee-friendly practices over the roughly six weeks the bees are active. 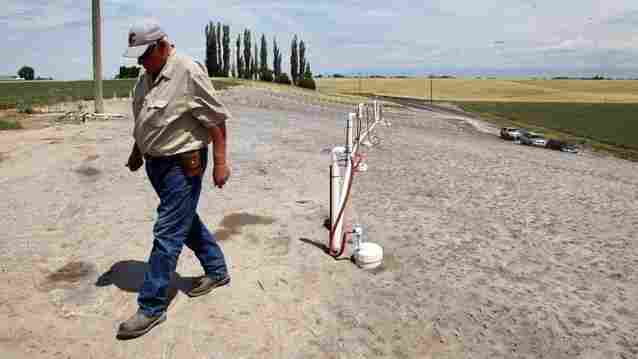 Farmer Mark Wagoner jokes that, when he first built this bee bed, he lured bees from Mike Ingham's nearby bed to populate it. It's not theft, though, because everyone benefits from healthy beds. Bees, after all, don't respect property lines. Aaron Scott/Oregon Public Broadcasting hide caption 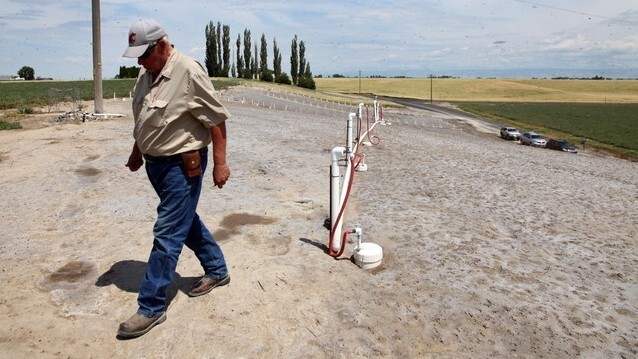 Farmer Mark Wagoner jokes that, when he first built this bee bed, he lured bees from Mike Ingham's nearby bed to populate it. It's not theft, though, because everyone benefits from healthy beds. Bees, after all, don't respect property lines.

"I sprayed this field a week ago with insecticide, and look, there's millions of bees right here," says Wagoner, pointing to the cloud swirling around him. "I think it's a great opportunity to explain to the people that are anti-pesticide that we are friends of the fuzzies, because we love these bees, and we don't want to hurt them."

This story comes to us from EarthFix, an environmental journalism collaboration led by Oregon Public Broadcasting in partnership with five other public media stations in Oregon, Washington and Idaho.