Accessibility links
Your Ancestors Probably Ate Insects. So What's Bugging You? : The Salt An anthropologist takes a deep dive into the history of gathering, raising and eating insects, and why in America and Europe, they're unlikely to become a mainstream food option anytime soon. 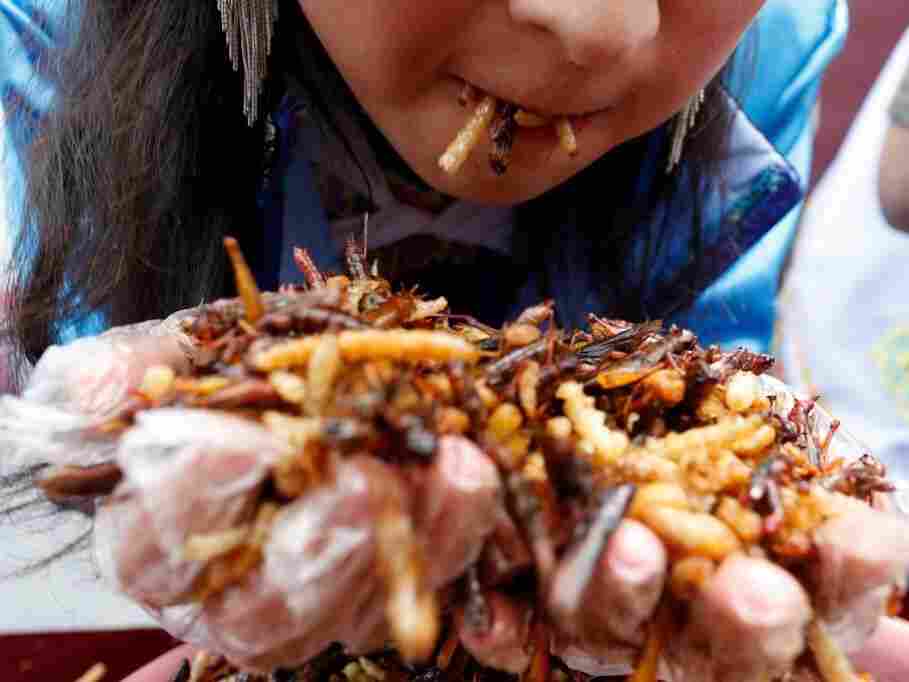 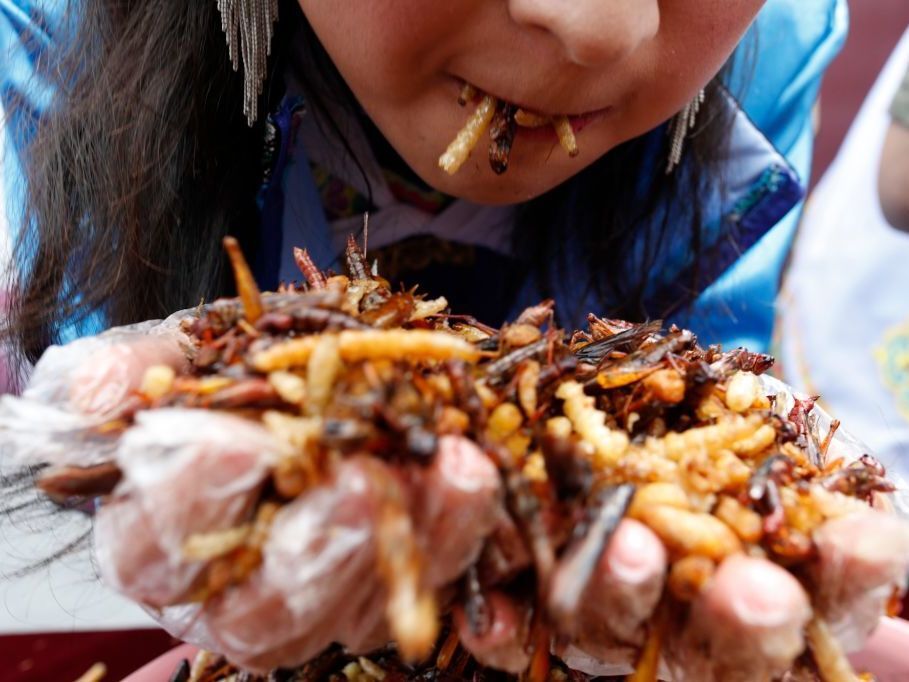 Tourists eat fried insects, including locusts, bamboo worms, dragonfly larvae, silkworm chrysalises and more during a competition in Lijiang, China. For Westerners, eating insects means getting over the ick factor.

Grossed out by that maggot squirming in your apple?

Your ancestors weren't. In fact, they probably would have popped the offending creature into their mouths and relished its savory flavor.

At least, that's what Julie Lesnik thinks. Lesnik is an assistant professor of anthropology at Wayne State University. She studies how people (and their prehistoric relatives) have gathered, farmed, and cooked insects for food.

Her new book, Edible Insects and Human Evolution, is primarily aimed at anthropologists and other researchers who study insects in the human diet. In it, she argues that people have been eating bugs for millennia, and our current disgust is a relatively new phenomenon.

We asked Lesnik how insects faded from the modern dinner table and why she thinks that needs to change.

Our conversation was edited for length and clarity.

Where do people eat the most insects today?

Southern Mexico. Mexico consumes more species of insect than any other country. And just eating grasshopper tacos — chapulines tacos — is probably the easiest way to eat insects, and the most delicious. Most people already love tacos. When they're cooked, they usually have a really nice crunch. You sometimes get an aroma like dried shrimp, as in southeast Asian cuisine. But they don't really taste like that. They're a little bit nutty.

Fresh boiled termites! With a little salt they taste just like popcorn. They're amazing. But they have to be fresh, just like popcorn. Most of them use acid as a defense mechanism. So you tend to get a lemony, acidic taste from termites.

Is this a new habit of yours?

When I first started this research I did not eat bugs. I was taking an entirely academic perspective on it, and I only ate termites once just to say I did. It took me a long time to get over this disgust that was deeply rooted in me.

What archaeological evidence do we have that suggests pre-modern humans ate insects?

We have evidence in the form of bone tools that are about 1.7 million years old from South Africa. They're scattered across a couple of sites but they are most abundant at a site known as Swartkrans. This site is mostly known for the fossil hominid Australopithecus robustus, a cousin of ours.

How do you know these tools were used to gather insects?

So if we ate bugs in the past, when did we stop, and why?

It starts from an innocent environmental reason. The number of desirable insects for food drops as you get further away from the equator. Northern areas like Europe have seasons that are cold for part of the year. So edible insects were never a major part of European history because they weren't readily available.

Then, think about these Europeans exploring for the first time. Christopher Columbus leaves Europe, goes down to the Caribbean. North Americans were portrayed like beasts because they ate things like insects, foods that Europeans had never seen before. And so eating insects became strongly stigmatized. It was immediately turned into an "us versus them" thing. "Civilized" Europeans would never think of eating bugs.

How does the psychology of disgust play into all of this?

It's important for people to be disgusted by the things that could transmit disease. We have to tell our kids "Don't play in the garbage" or "Don't play in the toilet." From an early age we tell children, "Don't put insects in your mouth" and then it sticks. But there's absolutely nothing wrong with eating insects if they're cleaned, cooked, and produced for human consumption.

How does this attitude hurt people in developing countries?

It's Not Just A Bug, It's A Fine-Dining Feature At This Thailand Restaurant

Our culture tends to permeate the globalized economy. Often, kids in developing countries don't want to eat insects because it's not what we're eating in America or Europe. Their grandparents may have eaten insects every day, but they have no interest in doing that. They want to eat the packaged food from the grocery store that the rest of the world eats. And so if we eliminate insects without a reasonable replacement, we just eliminate nutrients from their diet.

Beyond the disgust factor, what's stopping Americans from eating bugs?

Right now all of the regulations are state by state. They're vastly different for a cricket farm in Montana than a cricket farm in Colorado or New York. There is no language saying "these insects are clean," or "these insects are raised just for human consumption." That's stopping a lot of large, chain grocery stores from putting insects on their shelves. You can find them at co-ops, and you can shop online. But the large chains aren't doing it because the wording isn't there.

I was recently in D.C. and I got to speak with staffers from the House Committee on Agriculture. I brought up this idea with them. I had a Democratic staffer who worked with specialty crops, and I had a Republican staffer who worked with livestock. I asked them, "Which one of you does this fall under?" And they have no clue. So I think that insects, like seafood, need their own language in the farm bill.

What are some of the other challenges facing the edible insect industry?

There's a bottleneck right now. There are people who want to produce cricket-based products, like protein bars, chips and cookies, but there isn't the supply. There's actually more demand from people who want to start these businesses than cricket farms can supply.

We know insects are an environmentally friendly protein source, but are there other reasons we should eat them?

I like the idea of adding insects into the diet because it adds more variety. And when you add variety, you add protection. So if disaster struck our cattle industry and beef prices skyrocketed, we're protected if we have other protein sources like insects to rely on. The more food you have in your diet, the more you're prepared for disasters.

Do you think insects are destined to become a bigger part of the American diet?

I'm cautiously optimistic. Nothing's going to change overnight. To me it will have to be a generational change. The adults of this generation need to raise their kids in a world where insect food is a possibility.