Accessibility links
Meet The Restaurateurs Fighting To Save The Grand Staircase-Escalante Monument : The Salt Hell's Backbone Grill is an acclaimed restaurant founded nearly 20 years ago at the edge of the Utah monument. Now, amid controversy, its owners are battling Trump's plans to downsize the land. 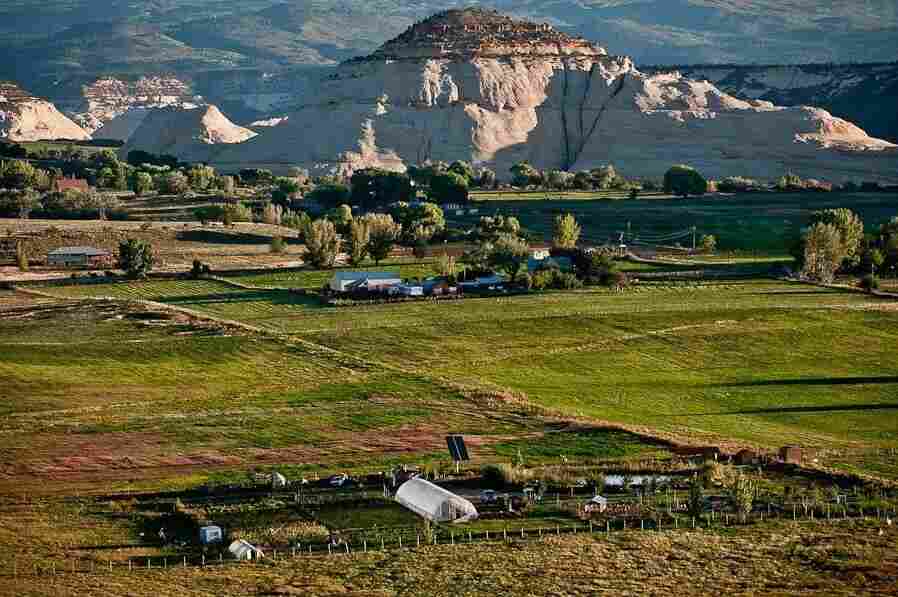 Hell's Backbone Grill is located in Boulder, Utah, about 250 miles south of Salt Lake City. The restaurant's owners are fighting Trump's plans to slash the size of nearby Grand Staircase-Escalante National Monument by more than half. Ace Kvale hide caption 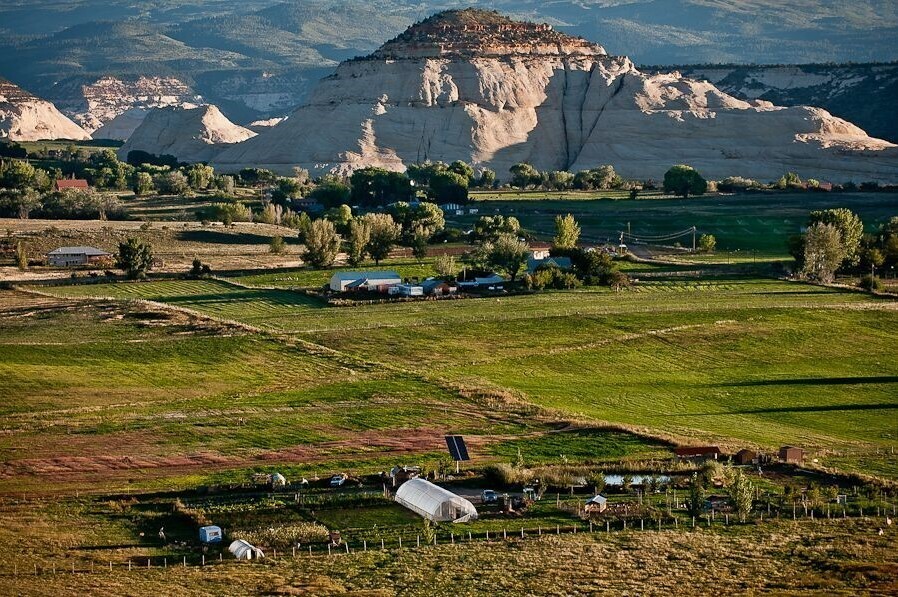 Hell's Backbone Grill is located in Boulder, Utah, about 250 miles south of Salt Lake City. The restaurant's owners are fighting Trump's plans to slash the size of nearby Grand Staircase-Escalante National Monument by more than half.

Standing between peach and cherry trees on her 6.5-acre Utah farm, Blake Spalding points to the Kaiparowits Plateau. The looming bluff is dotted with thousand-year-old pinyon pine and juniper trees.

"That is one of the areas they're hoping to mine," she tells a group of visiting chefs from Salt Lake City. "It's full of dinosaur fossils and more than 650 documented species of wild bees."

Nearly 20 years ago, Spalding and her business partner, Jen Castle, founded Hell's Backbone Grill in Boulder, Utah, on the edge of the then-newly designated Grand Staircase-Escalante National Monument, about 250 miles south of Salt Lake City. The remote and sustainable restaurant has become a destination for culinary travelers seeking a taste of its terroir-driven fare. It's an amalgam of Mormon pioneer, Western range cowboy and traditional Southwest flavors, like juniper lamb posole or grilled pork chops with Boulder crabapple barbecue sauce.

But now the monument's untrammeled wilderness — marked by dreamy red rock arches, twisted riverbed canyons and vast panoramas that span from rainbow-colored buttes to snow-capped peaks — is under threat. So is Spalding and Castle's acclaimed restaurant.

The same week that the two restaurateurs released their long-anticipated cookbook, This Immeasurable Place, which they call a love letter to the Grand Staircase-Escalante, the Trump administration announced it was reducing the nearly 2 million-acre national monument by more than half.

Lost in the headlines about the proposed changes to Utah's public lands are small players like Spalding and Castle, who both support and have been supported by the monument, building a culturally significant business in the harsh high desert.

"Jen and I envisioned creating a warm hearth for people going into a genuine wilderness experience, and a place for them when they return from what we hope will be a transformational experience," says Spalding. "Everything else came out of that." 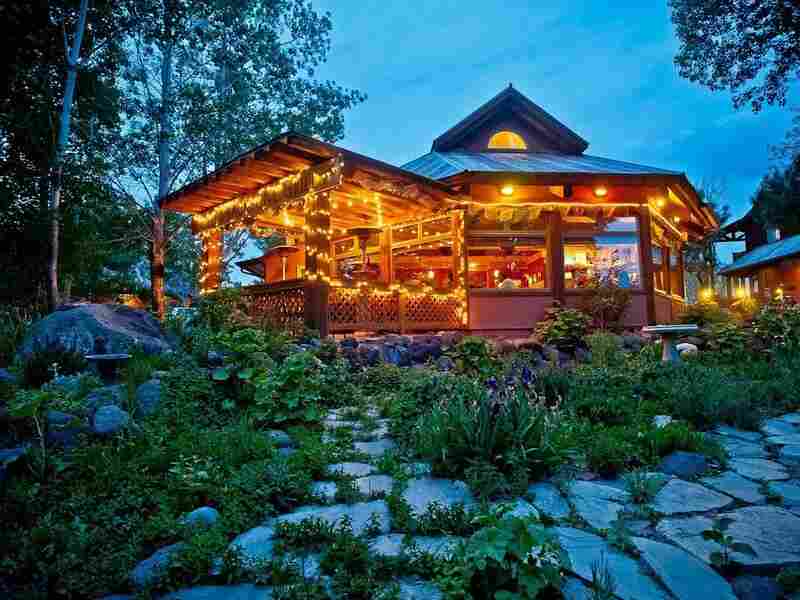 The remote and sustainable restaurant has become a destination for travelers seeking a taste of its terroir-driven fare. Ace Kvale hide caption 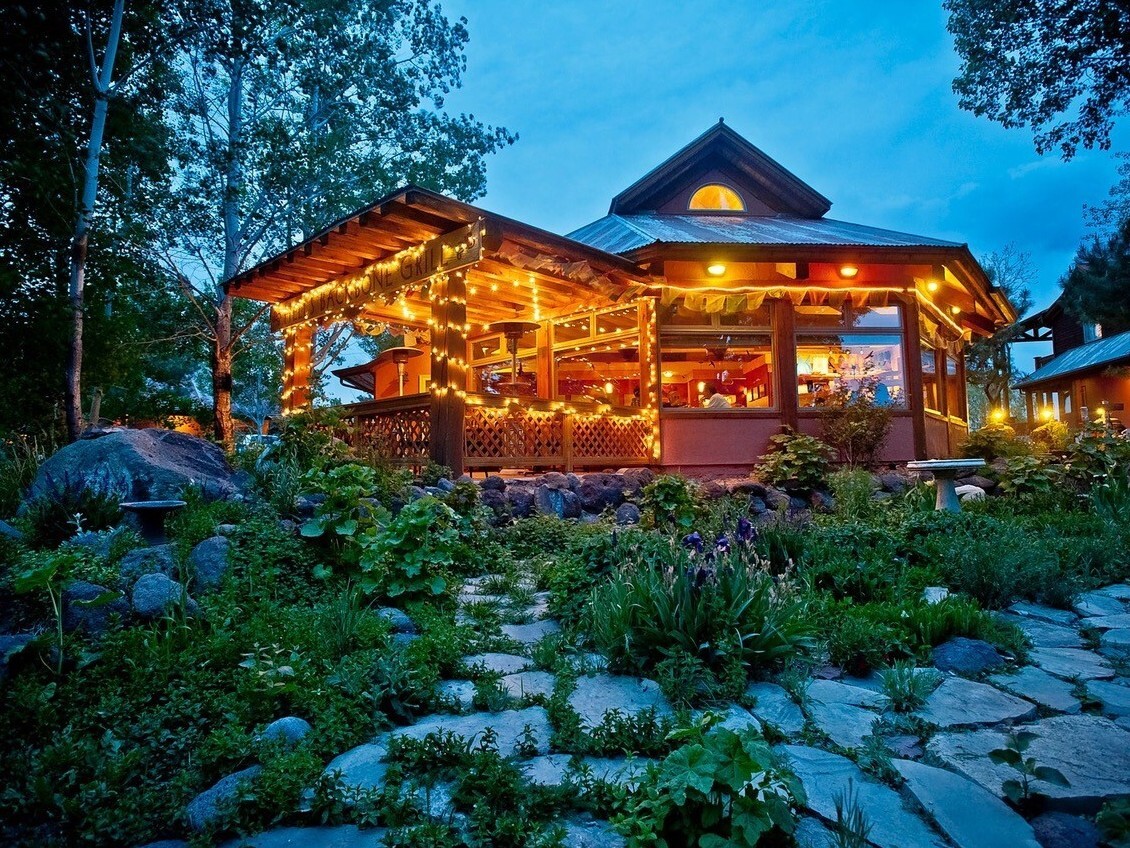 The remote and sustainable restaurant has become a destination for travelers seeking a taste of its terroir-driven fare.

For the past two years, the business partners and best friends have been named as semifinalists for "Best Chef: Southwest" by the James Beard Foundation. They're using their restaurant and its far-reaching customer base to rally support for preserving southern Utah's threatened public lands. The restaurateurs have expressed their concern that the downsizing of the monument will adversely impact their business in a lawsuit filed by the nonprofit Grand Staircase-Escalante Partners along with two other plaintiffs, the Society of Vertebrate Paleontology and the Conservation Lands Foundation.

A fact sheet explaining the changes and what can be done to try to stop them sits atop the hostess stand at Hell's Backbone. It suggests asking members of Congress to endorse enacting a bill protecting all national monuments, donating to organizations that are fighting for public lands, and calling or writing U.S. Secretary of the Interior Ryan Zinke and Utah Gov. Gary Herbert.

"[Spalding and Castle] are a driving force, one of the largest voices down there," says Chantelle Bourdeaux, an advisory member for Slow Food Utah. "People rely on them wholeheartedly to fight for something like this."

Business has spiked by more than 20 percent since last year at Hell's Backbone, keeping the 50-person staff busy. But Spalding and Castle believe that many of their new guests are coming to see the monument before it gets ruined by extractive industries.

Already, the restaurateurs and wilderness lovers are seeing the effects of scaling back. According to Nicole Croft, executive director of Grand Staircase-Escalante Partners, people have been illegally driving all-terrain vehicles through the monument, vandalizing archaeological sites and burning fires all over the land. And mining claims have been staked.

Vancouver-based copper and silver mining firm Glacier Lake Resources Inc. acquired the Colt Mesa deposit, an approximately 200-acre piece of land rich in copper, cobalt and nickel, about 35 miles southeast of Boulder, the closest community to the parcel and the most direct route in.

"We don't have much infrastructure, we don't even have an ATM or stoplight," says Spalding. "All of this is happening so fast, I don't know what's going to happen."

Although many in Boulder are fearful about what this may mean for the future — membership in Grand Staircase Escalante Partners jumped 195 percent in the monument's gateway communities in 2017, says Croft — there are locals who are pleased with the downsizing of protected lands. Many of the 5,000 residents of the Connecticut-sized county want Grand Staircase-Escalante reduced, says Garfield County Commission Chairperson Leland Pollack. 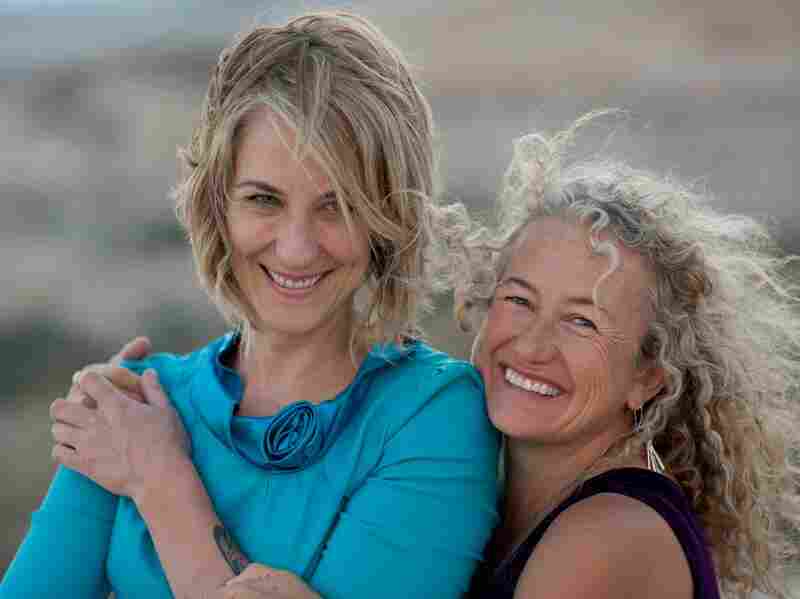 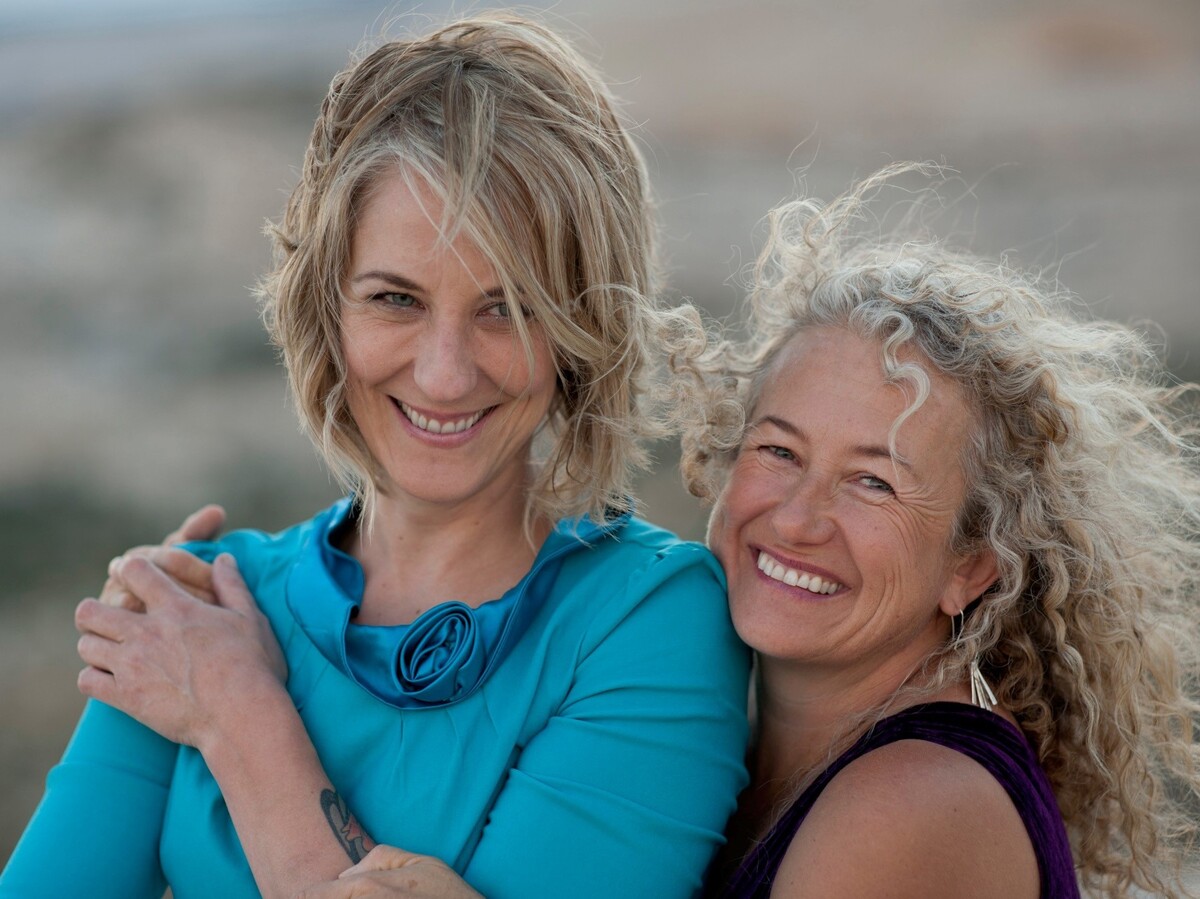 Jen Castle (left) and Blake Spalding are the owners and chefs of Hell's Backbone Grill. Chantelle Bourdeaux, an advisory member for Slow Food Utah, calls the two restaurateurs "a driving force" behind efforts to preserve Grand Staircase-Escalante in its current form.

Among them is lifelong Escalante resident Shannon Steed. As the owner of a vacation rental business, Wild West Retreat, and the historic Escalante Showhouse, Steed makes a nice living from the travelers that pass through and he says he wants to protect his "beautiful backyard." But Steed also feels resentment about the way the monument was created with little input from locals, he says.

Steed remembers a time, decades ago, when the timber industry was still around, an issue which he admits is separate from the monument. His dad owned the local sawmill, and the high school had twice as many students. Mineral extraction, he says, could bring well-paying jobs and residents back to the area. "Tourism is only good for about seven months a year," he says. "It's hard to make a living on seven months of business."

Controversy over the reduction raged again last week when it was reported by The Washington Post and The Salt Lake Tribune that the Bureau of Land Management released a report saying that Grand Staircase-Escalante National Monument has boosted tourism and spurred archaeological and scientific discovery without uprooting the cattle operations that graze within its borders.

The next day, the agency said it released that report in error and then sent out an updated document removing those findings, instead focusing on the benefits of logging, ranching and energy development.

Along with reducing the size of nearby Bears Ears National Monument, Trump's executive order divided Grand Staircase-Escalante into three smaller units: Grand Staircase, Escalante Canyons (which Utah Rep. Chris Stewart proposed as a new national park managed by local officials) and Kaiparowits. The latter features jagged borders that would allow access to the rich seams of high-quality coal hidden under the plateau.

Food and farming are deeply entrenched in the history of the area, which is home to some of the oldest settlements in the Colorado Plateau. Evidence of food cultivation, found in DNA of the now wild Four Corners Potato, dates back 11,000 years. Three indigenous populations — Kayenta and Virgin Ancestral Puebloans and the Fremont Peoples — coexisted on the land. Hole-in-the-Rock Road, blasted out by Mormon pioneers on a treacherous pilgrimage, was contained within the monument's original boundaries, but has since been excised under the new borders.

"Eighty-five percent of the biodiversity of the entire state is here," says Croft. "It starts at a high elevation and goes low to rich riparian zones that hold nearly all life in the desert."

For the past two decades, Hell's Backbone Grill has been taking inspiration from the monument. It took its name from the famous chasm set on nearby Boulder Mountain. Neither Spalding nor Castle know what's going to happen in the future as they watch their beloved monument change before their eyes.

It's unclear whether expanded infrastructure and commercial exploitation will affect their business, but it has already affected their spirit. "We're the Shire, and the Orcs are gathering on our borders," says Spalding, referring to The Lord of the Rings. "It's heavy, it's dark, it's frustrating. I feel like no one is listening to us or the millions of people who care very much that the monument be left intact."

Sara Ventiera is a food and environmental writer whose work has been published in Food & Wine, BBC Travel and the Village Voice. You can find more of her work here. Follow her on Instagram: @saraventiera.