Accessibility links
Gulf Of Alaska Cod Are Disappearing. Blame 'The Blob' : The Salt The cod population in the Gulf of Alaska is at its lowest level on record. Scientists say the culprit is a warm-water mass known as "the blob." 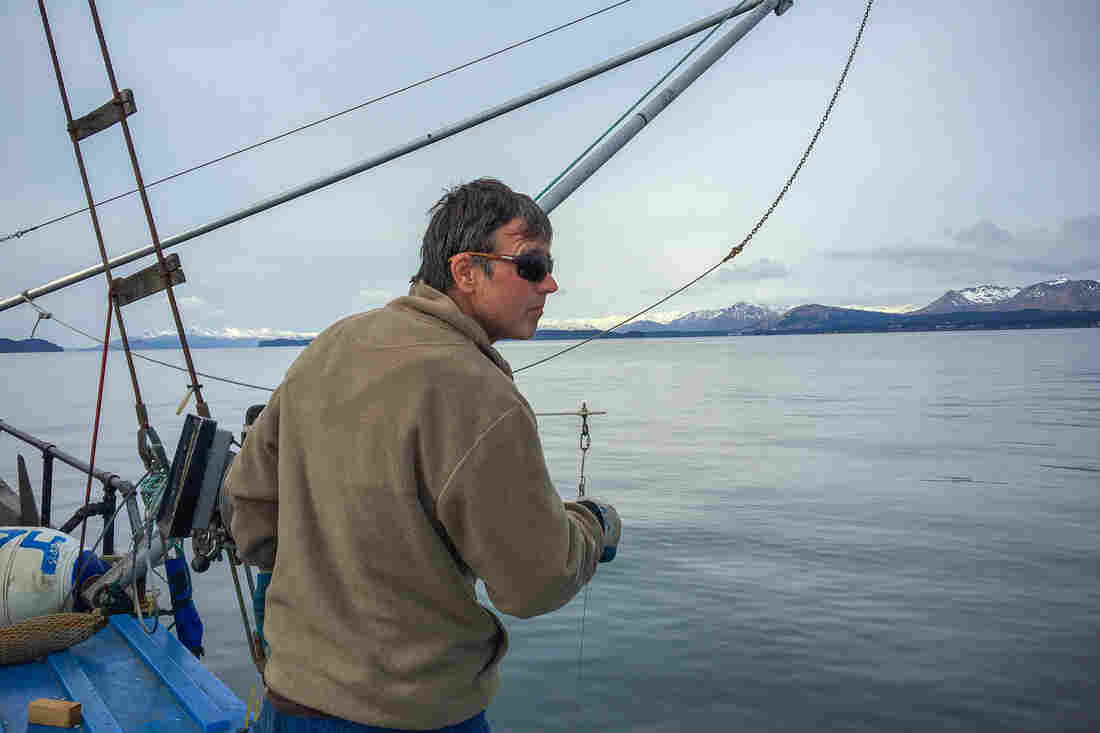 Fisherman Darius Kasprzak searches for cod in the Gulf of Alaska. The cod population there is at its lowest level on record. Annie Feidt for NPR hide caption 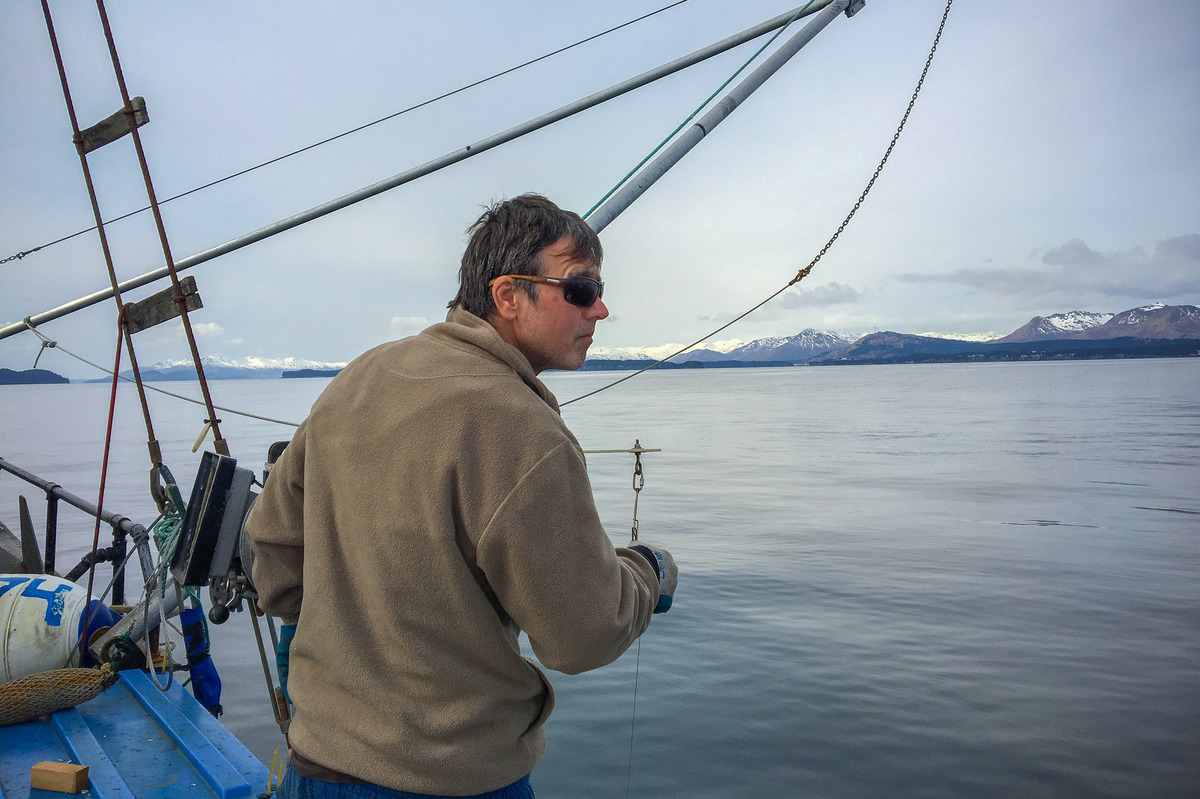 Fisherman Darius Kasprzak searches for cod in the Gulf of Alaska. The cod population there is at its lowest level on record.

A hint of optimism creeps into Darius Kasprzak's voice as he pilots his boat, the Marona, out of Kodiak harbor on a recent calm day.

"We're in the morning, we're at the start of the flood tide," he says. "This is where you want to be."

He is fishing a bay on the northwestern edge of the Gulf of Alaska, about 200 miles southwest of Anchorage. The chilly waters here are some of the most productive fish habitat on Earth. In a good year, Kasprzak could catch more than 100,000 pounds of cod.

On the screen of his echo sounder, he sees a dense cluster of dots on the ocean bottom.

He kills the engine, leaps onto the deck and lowers one of his fishing lines into the water. 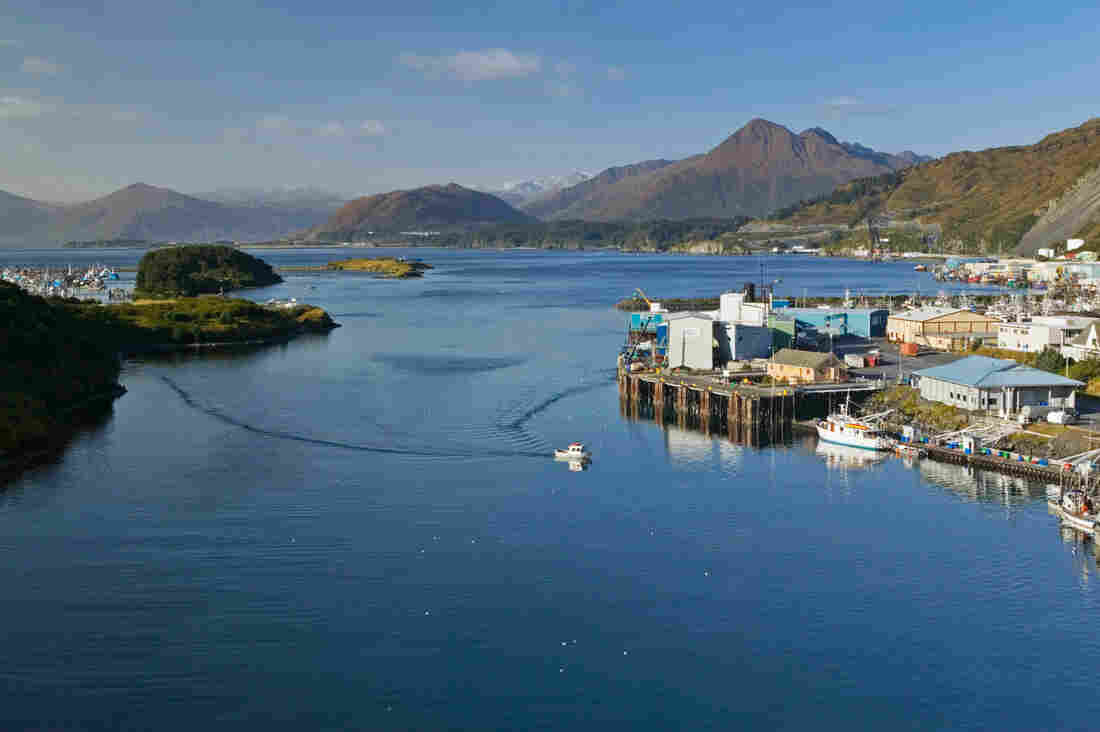 But the cod decline could be a disaster for Kodiak. With boats traveling more than 1,000 miles away to find fish, crews aren't stocking up at stores in town, and boats aren't paying the local fish tax. Kevin Smith/Getty Images/Perspectives hide caption 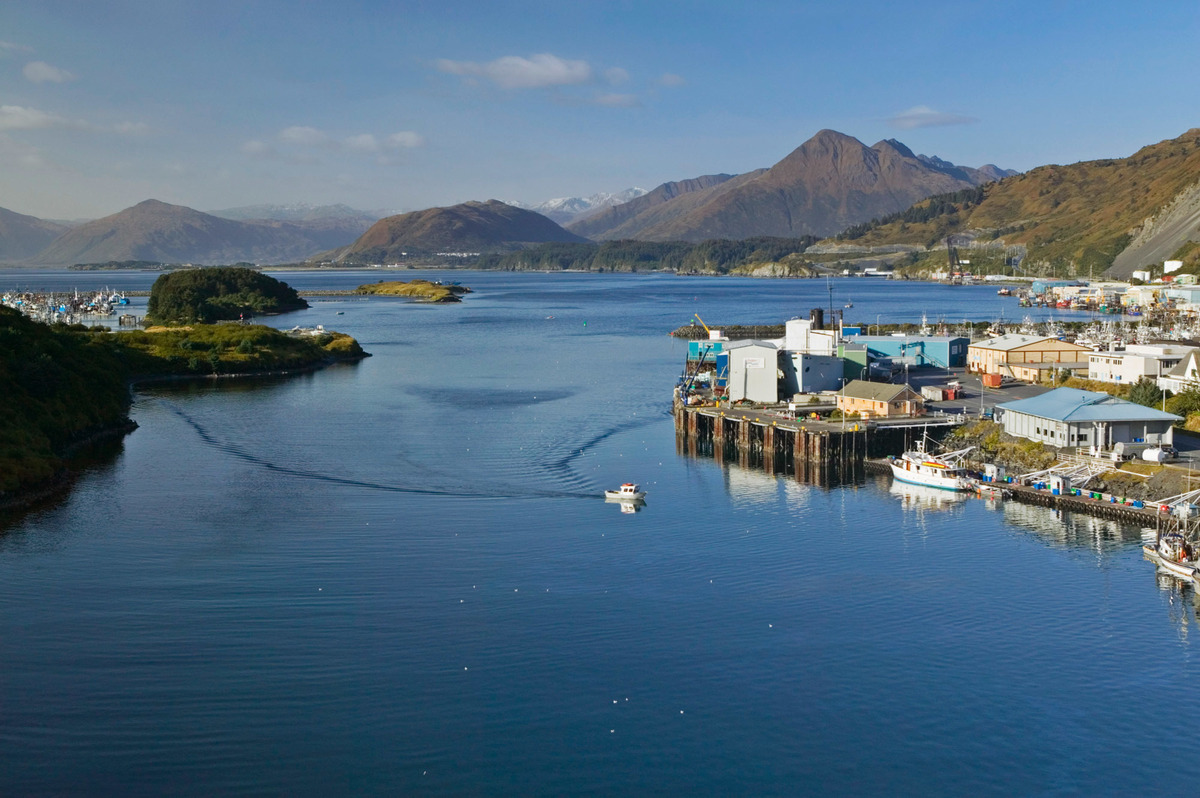 But the cod decline could be a disaster for Kodiak. With boats traveling more than 1,000 miles away to find fish, crews aren't stocking up at stores in town, and boats aren't paying the local fish tax.

For years, Alaska fishermen like Kasprzak have worried that climate change would threaten their livelihoods. Now it has. The cod population in the Gulf of Alaska is at its lowest level on record, according to an expert at the National Oceanic and Atmospheric Adminstration. The culprit is a warm-water mass called "the blob" that churned in the Pacific Ocean between 2013 and 2017.

At its peak, the blob stretched from Alaska to South America. In the Gulf of Alaska, the cod population plummeted by more than 80 percent.

Climate change didn't cause the blob all on its own. But scientists say global warming made it worse, pushing high ocean temperatures to the extreme.

Kasprzak says he used to think the rich ocean ecosystem he fishes was unshakable. But he has mostly given up on finding more cod here.

"We've just seen now that even the mighty Gulf of Alaska, how fragile it actually is, when all you've got to do is warm it up," he says. "You don't even have to warm it up that much, a couple of degrees. It doesn't take that much."

Since early 2017, the temperature of the Gulf of Alaska has been close to normal. Now everyone in Kodiak is asking: Will the cod come back?

Mike Litzow is trying to answer that question. He is a fisheries biologist who works for the University of Alaska and is based in Kodiak. With his wiry frame and thick beard, he looks more like a fisherman than a scientist.

Litzow does go fishing every few weeks in the spring and summer — for science, in search of young cod. He stands in shallow water near Kodiak and uses a net called a beach seine to sweep up fish hiding in the eelgrass and kelp beds.

"There's all kinds of information you can get over time, once you catch the fish," Litzow says.

He doesn't find any cod in this net. But by the end of the summer, Litzow hopes to catch enough tiny cod to provide clues on whether the population will recover.

Litzow doubts it will. He thinks the cod decline may have been so steep that other fish might fill its place in the ecosystem.

"When you push a population down really hard, the resources that population used to rely on can be exploited by other populations," he says.

Other scientists are more optimistic. But everyone seems to agree on one point: The blob is a dress rehearsal for a future with climate change. Marine heat waves are expected to happen more often and, overall, ocean temperatures will rise.

Litzow says it's hard to know what kind of ripple effect that will have. If you had asked a bunch of scientists to predict how fish would do during the blob years in the Gulf of Alaska, "it would just be like drawing names out of a hat," he says. "It's not like all of the scientists would say cod are going to be the ones that collapse."

Litzow says fishing communities must get used to the prospect of more frequent shocks to the ocean ecosystem. And Kodiak certainly isn't the only place that has seen them. Those changes aren't all bad, he says. When one species declines, others do well. Right now, sablefish are booming in the Gulf of Alaska. 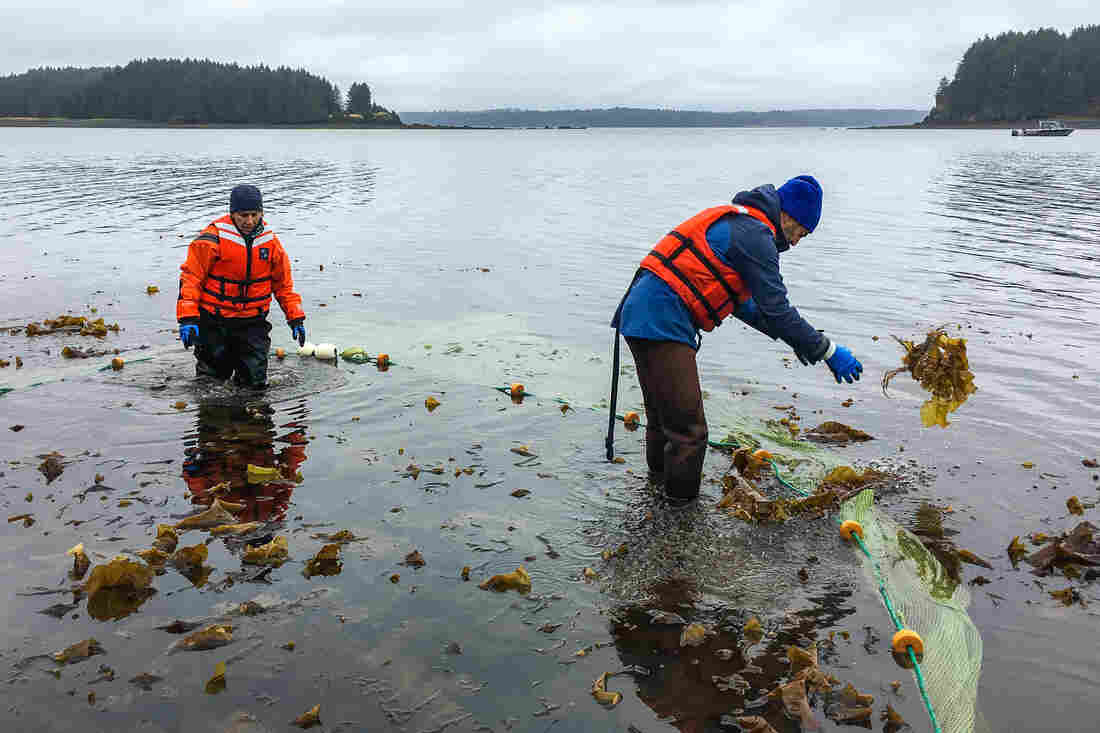 Fisheries biologist Mike Litzow (right) clears kelp from the seine he uses to catch young cod for a study to help determine whether the species will bounce back in the Gulf of Alaska. Mitch Borden hide caption

But the cod decline could be a disaster for fishermen and for Kodiak. Already, cod boats are traveling more than 1,000 miles away to find fish. That means crews aren't stocking up at stores in town and boats aren't paying the local fish tax.

Out in the Gulf, Darius Kasprzak has been on his boat for more than four hours. He sees some puffins, even a whale, but no cod.

Eventually, he gives up and decides to try to catch some dusky rockfish. He lowers his line over a promising spot and quickly reels one in.

"It's a nice one, too," he says as he takes the fish off the hook and puts it on ice.

The dusky is dinner, but it's not a living. He has considered trolling for salmon instead, but that would require an expensive new permit and gear, and many salmon runs have been weak, too. The blob could be a factor.

So Kasprzak is looking at other career options. But he would like to stay in Kodiak for as long as he can. That way, if the cod do come back, he'll be one of the first ones out on the water.

This report comes from Alaska's Energy Desk, a public media collaboration focused on energy and the environment. It's part of a podcast called The Big Thaw. The first episode will be released Aug. 9.