Accessibility links
When The U.S. Government Tried To Replace Migrant Farmworkers With High Schoolers : The Salt In 1964, a program that brought migrant Mexican laborers to the U.S. ended. So the U.S. recruited American students to pick crops instead. When they saw their living conditions, strikes ensued. 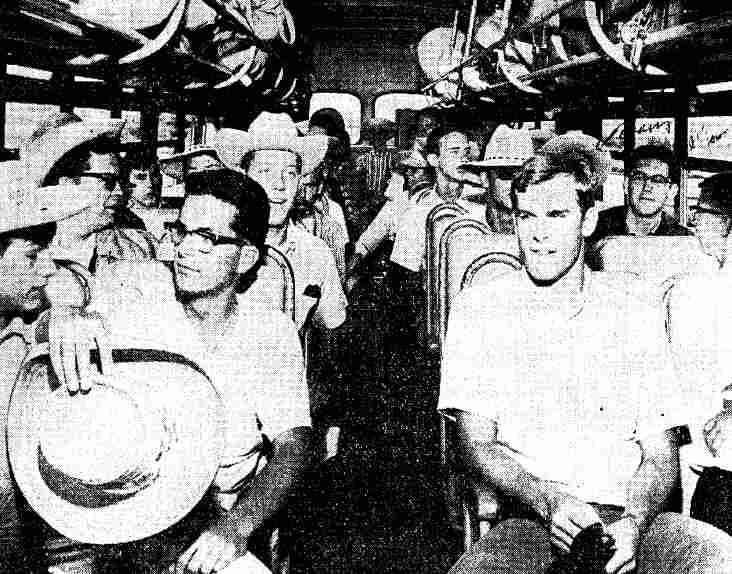 San Diego high school students await a bus ride to Blythe, Calif., to go pick cantaloupes in the summer of 1965. They were recruited as part of the A-TEAM, a government program to replace migrant farm workers with high school students. Courtesy of the San Diego Union-Tribune hide caption 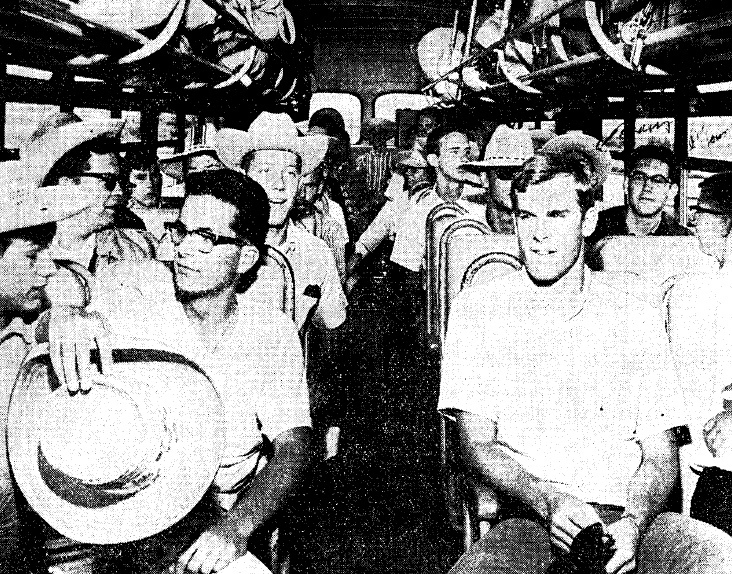 Courtesy of the San Diego Union-Tribune

Randy Carter is a member of the Director's Guild of America and has notched some significant credits during his Hollywood career. Administrative assistant on The Conversation. Part of the casting department for Apocalypse Now. Longtime first assistant director on Seinfeld. Work on The Blues Brothers, The Godfather II and more.

But the one project that Carter regrets never working on is a script he wrote that got optioned twice but was never produced. It's about the summer a then-17-year-old Carter and thousands of American teenage boys heeded the call of the federal government ... to work on farms.

The year was 1965. On Cinco de Mayo, newspapers across the country reported that Secretary of Labor W. Willard Wirtz wanted to recruit 20,000 high schoolers to replace the hundreds of thousands of Mexican agricultural workers who had labored in the United States under the so-called Bracero Program. Started in World War II, the program was an agreement between the American and Mexican governments that brought Mexican men to pick harvests across the U.S. It ended in 1964, after years of accusations by civil rights activists like Cesar Chavez that migrants suffered wage theft and terrible working and living conditions.

But farmers complained — in words that echo today's headlines — that Mexican laborers did the jobs that Americans didn't want to do, and that the end of the Bracero Program meant that crops would rot in the fields.

Wirtz cited this labor shortage and a lack of summer jobs for high schoolers as reason enough for the program. But he didn't want just any band geek or nerd — he wanted jocks.

"They can do the work," Wirtz said at a press conference in Washington, D.C., announcing the creation of the project, called A-TEAM — Athletes in Temporary Employment as Agricultural Manpower. "They are entitled to a chance at it." Standing beside him to lend gravitas were future Baseball Hall of Famers Stan Musial and Warren Spahn and future Pro Football Hall of Famer Jim Brown.

Over the ensuing weeks, the Department of Labor, the Department of Agriculture, and the President's Council on Physical Fitness bought ads on radio and in magazines to try to lure lettermen. "Farm Work Builds Men!" screamed one such promotion, which featured 1964 Heisman Trophy winner John Huarte. The migrant labor barracks where Randy Carter and his high school classmates lived during the summer of 1965 were still standing in 1992, when Carter took this photo. Carter says the barracks had no insulation and no air conditioning, with "nighttime temperatures in the 90s." Randy Carter hide caption

Local newspapers across the country showcased their local A-TEAM with pride as they left for the summer. The Courier of Waterloo, Iowa, for instance, ran a photo of beaming, bespectacled but scrawny boys boarding a bus for Salinas, where strawberries and asparagus awaited their smooth hands. "A teacher-coach from [the nearby town of] Cresco will serve as adviser to all 31," students, the Courier reassured its readers.

But the national press was immediately skeptical. "Dealing with crops which grow close to the ground requires a good deal stronger motive" than money or the prospects of a good workout, argued a Detroit Free Press editorial. "Like, for instance, gnawing hunger."

Despite such skepticism, Wirtz's scheme seemed to work at first: About 18,100 teenagers signed up to join the A-TEAM. But only about 3,300 of them ever got to pick crops.

One of them was Carter.

He was a junior at the now-closed University of San Diego High School, an all-boys Catholic school in Southern California. About 25 of his classmates decided to sign up for the A-TEAM because, as he recalls with a laugh more than 50 years later, "We thought, 'I'm not doing anything else this summer, so why not?' "

Funny enough, Carter says none of the recruits from his school — himself included — were actually athletes: "The football coach told [the sportsters], 'You're not going. We've got two-a-day practices — you're not going to go pick strawberries."

Students from across the country began showing up on farms in Texas and California at the beginning of June. Carter and his classmates were assigned to pick cantaloupes near Blythe, a small town on the Colorado River in the middle of California's Colorado Desert.

He remembers the first day vividly. Work started before dawn, the better to avoid the unforgiving desert sun to come. "The wind is in your hair, and you don't think it's bad," Carter says. "Then you go out in the field, and the first ray of sun comes over the horizon. The first ray. Everyone looked at each other, and said, 'What did we do?' The thermometer went up like in a Bugs Bunny cartoon. By 9 a.m., it was 110 degrees." 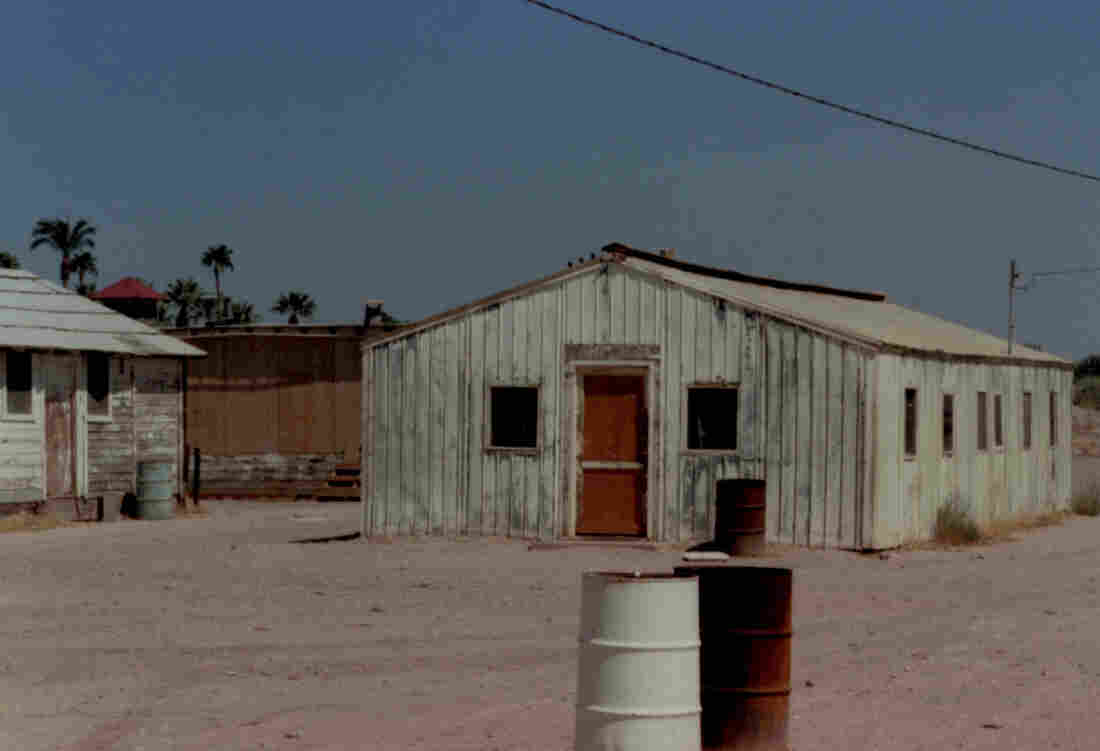 An exterior view of the barracks where Carter and his classmates lived for the summer, pictured in 1992. Carter says even in 1965, the housing was dilapidated. The University High crew worked six days a week, with Sundays off, and they were not allowed to return home during their stint. Randy Carter hide caption 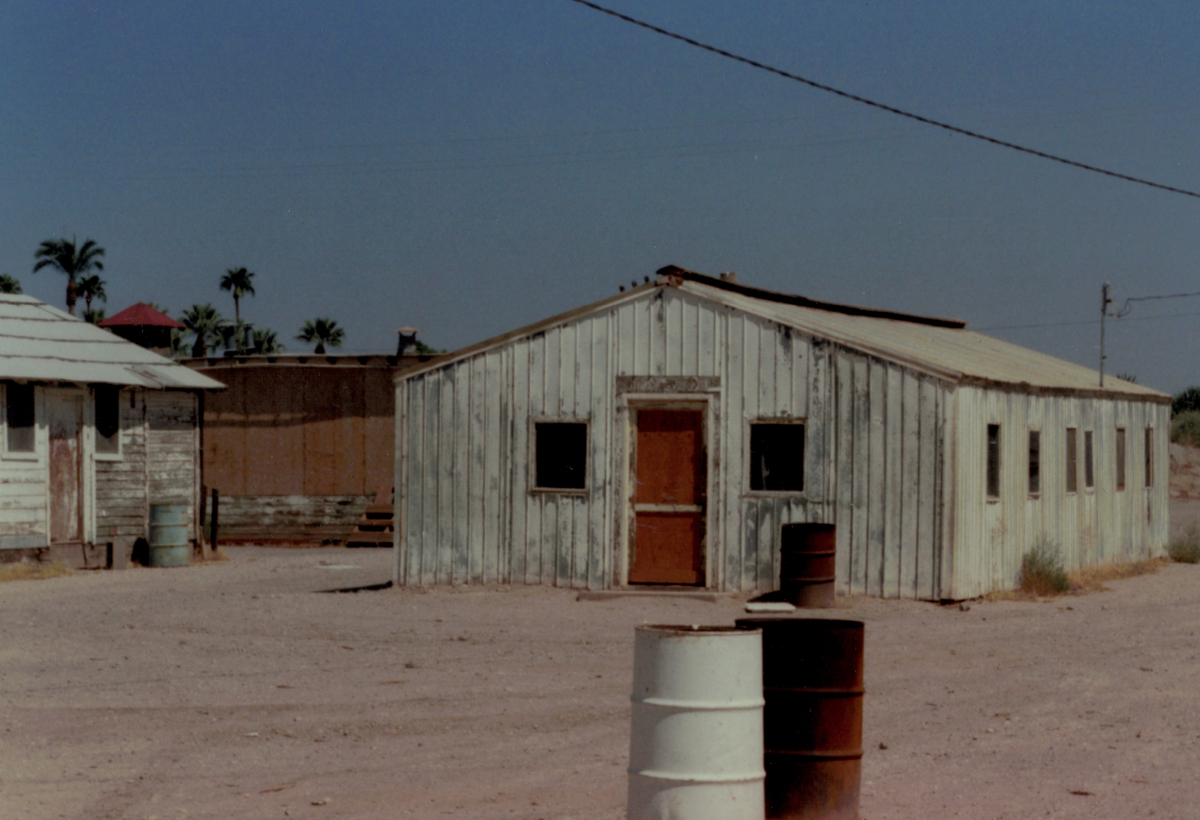 An exterior view of the barracks where Carter and his classmates lived for the summer, pictured in 1992. Carter says even in 1965, the housing was dilapidated. The University High crew worked six days a week, with Sundays off, and they were not allowed to return home during their stint.

Garden gloves that the farmers gave the students to help them harvest lasted only four hours, because the cantaloupe's fine hairs made grabbing them feel like "picking up sandpaper." They got paid minimum wage — $1.40 an hour back then — plus 5 cents for every crate filled with about 30 to 36 fruits. Breakfast was "out of the Navy," Carter says — beans and eggs and bologna sandwiches that literally toasted in the heat, even in the shade.

The University High crew worked six days a week, with Sundays off, and they were not allowed to return home during their stint. The farmers sheltered them in "any kind of defunct housing," according to Carter — old Army barracks, rooms made from discarded wood, and even buildings used to intern Japanese-Americans during World War II.

Problems arose immediately for the A-TEAM nationwide. In California's Salinas Valley, 200 teenagers from New Mexico, Kansas and Wyoming quit after just two weeks on the job. "We worked three days and all of us are broke," the Associated Press quoted one teen as saying. Students elsewhere staged strikes. At the end, the A-TEAM was considered a giant failure and was never tried again.

This experiment quickly disappeared into the proverbial dustbin of history. In fact, when Stony Brook University history professor Lori A. Flores did research for what became her award-winning 2016 book, Grounds for Dreaming: Mexican Americans, Mexican Immigrants, and the California Farmworker Movement, she discovered the controversy for the first time. Until then, the only time she had heard of any A-TEAM, she now says with a laugh, "was the TV show."

Flores thinks the program deserves more attention from historians and the public alike.

"These [high school students] had the words and whiteness to say what they were feeling and could act out in a way that Mexican-Americans who had been living this way for decades simply didn't have the power or space for the American public to listen to them," she says. "The students dropped out because the conditions were so atrocious, and the growers weren't able to mask that up."

She says the A-TEAM "reveals a very important reality: It's not about work ethic [for undocumented workers]. It's about [the fact] that this labor is not meant to be done under such bad conditions and bad wages."

The students tried to make the most of their summer. On their Sundays off, they would swim in irrigation canals or hitchhike into downtown Blythe and try to get cowboys to buy them a six-pack of beer. Each high school team was supposed to have a college-age chaperone, but Carter said theirs would "be there for a day, and then disappear to go to Mexico or surfing."

Carter and his classmates still talk about their A-TEAM days at every class reunion. "We went through something that you can't explain to anyone, unless you were out there in that friggin' heat," the 70-year-old says. "It could only be lived."

But he says the experience also taught them empathy toward immigrant workers that Carter says the rest of the country should learn, especially during these times.

"There's nothing you can say to us that [migrant laborers] are rapists or they're lazy," he says. "We know the work they do. And they do it all their lives, not just one summer for a couple of months. And they raise their families on it. Anyone ever talks bad on them, I always think, 'Keep talking, buddy, because I know what the real deal is.' "