Accessibility links
High Yields Coupled With Habitat Preservation May Reduce Agricultural Carbon Emissions : The Salt Should we concentrate farming in a small area, or spread it out to reduce the environmental impact? It's a dilemma farmers face as they feed a growing planet. A new study weighs in.

Which Vision Of Farming Is Better For The Planet?

Which Vision Of Farming Is Better For The Planet? 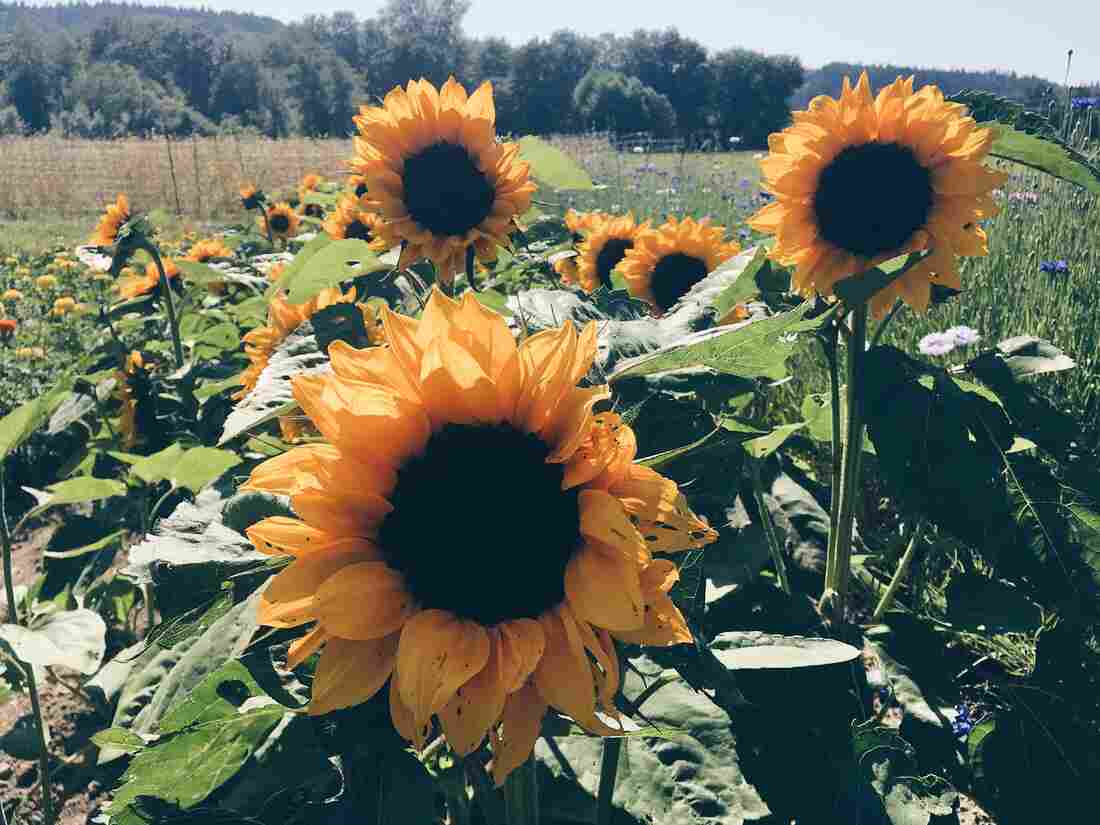 Along the back of this field of sugar snap peas, sunflowers and bachelor buttons at Oxbow Farm & Conservation Center is a buffer of maturing big-leaf maples and red-osier dogwoods. It's a combination of forest and thicket that the farm has left standing to help protect water quality in the river and aquifer. Oxbow Farm & Conservation Center hide caption 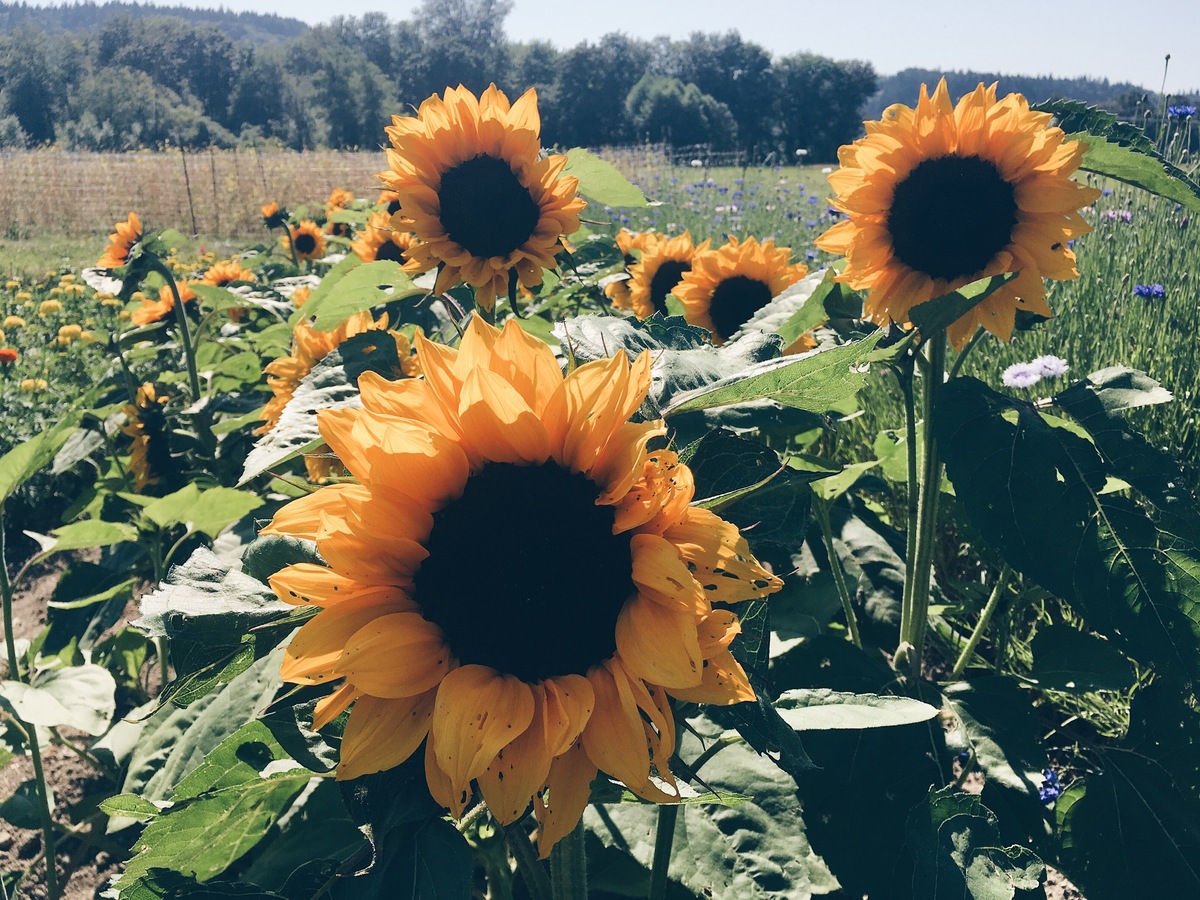 Along the back of this field of sugar snap peas, sunflowers and bachelor buttons at Oxbow Farm & Conservation Center is a buffer of maturing big-leaf maples and red-osier dogwoods. It's a combination of forest and thicket that the farm has left standing to help protect water quality in the river and aquifer.

How do you feed an increasing number of people without harming the environment?

As it turns out, growing as much food as possible in a small area may be our best bet for sustainably feeding the world's population, according to new research.

It all comes down to how we manage greenhouse gases and climate change.

People often associate greenhouse emissions with burning fossil fuels, but farming makes a lot of them, too. That's because farms usually replace natural vegetation, like trees, which store carbon.

Farmers who wish to minimize their carbon footprint have traditionally held two philosophies, says David Williams, the lead author of a paper published last week in the journal Current Biology.

The first philosophy, known as "land-sharing," involves maximizing the amount of carbon stored on farmland. "This can mean things like planting trees in a field, or maintaining little patches of non-crop habitat on your farm," explains Williams.

But land-sharing has a cost.

"You almost certainly lower your agricultural yields," says Williams. "That means you won't be able to produce the same amount of food per unit area."

So, if each piece of land produces less food, more pieces of land will have to be farmed to maintain the same level of production.

The other philosophy for agricultural carbon mitigation called "land sparing" maximizes the per-acre yield without worrying about carbon storage.

Since yields are higher, less land is needed to produce the same amount of food. This means that uncultivated land can then be preserved as natural habitat.

Williams and his team wanted to know which strategy was best for storing carbon. To answer this question, they measured the amount of carbon stored in farms and natural areas from three agricultural regions in Mexico, Ghana, and Poland.

Then, the scientists used data from the farmers and the governments to estimate how much food was being grown on each farm. Williams could then extrapolate the data to determine whether "land-sharing" or "land-sparing" resulted in more carbon storage at a defined level of food production.

The results were clear.

"We found that the least damaging strategy was the land-sparing strategy," says Williams.

In other words, sacrificing a small area to food production, and leaving the rest to nature, was the most climate-friendly strategy.

But before farmers jump on the high-intensity bandwagon, Williams has a few words of caution.

First, the land-sparing strategy only works if high yields mean that other land remains undeveloped. Unless farmers are financially incentivized to preserve natural habitat, this isn't likely to happen.

Secondly, the study does not account for carbon emissions from agricultural machinery and chemicals.

Matt Distler is an ecologist with Oxbow Farm & Conservation Center, which sits on a 243-acre mosaic of organic farmland, wetland, and forest east of Seattle. Distler's job is to balance food production against environmental concerns.

For Distler, the results are interesting, but they might not change the way they do things at Oxbow. That's because their decisions are based on a lot of different environmental considerations, and carbon storage is only one of them.

"Certainly, the question of carbon is in the back of our minds," says Distler. "But we're focused a bit more on the conservation of biodiversity."

Williams understands that conservation has many components, but is quick to cite previous research indicating that land-sparing is also beneficial for wildlife biodiversity.

Phil Robertson, professor of ecosystem science at Michigan State University, says that the real audience of the paper isn't necessarily the farmers.

"This information is going to be used by policymakers as they incentivize farmers and landowners to store carbon," Robertson says. "If the market doesn't reward them [farmers] for storing carbon, they're not likely to store carbon."

Williams' study provides guidance on how more food can be grown while minimizing environmental harm. Whether the results become incorporated into policy, however, remains to be seen.

In an earlier version of this story, Matt Distler's last name was misspelled as Bisler.