Accessibility links
Former Tyson Foods CEO Brings Chicken Farming To Rwanda — But Can It Last? : The Salt The Smith family foundation aims to build a chicken business in Africa, but the extensive project is costly and difficult, and Rwanda cannot yet support a modern poultry industry without aid money.

Former Tyson Foods CEO Brings Chicken Farming To Rwanda — But Can It Last?

Former Tyson Foods CEO Brings Chicken Farming To Rwanda — But Can It Last? 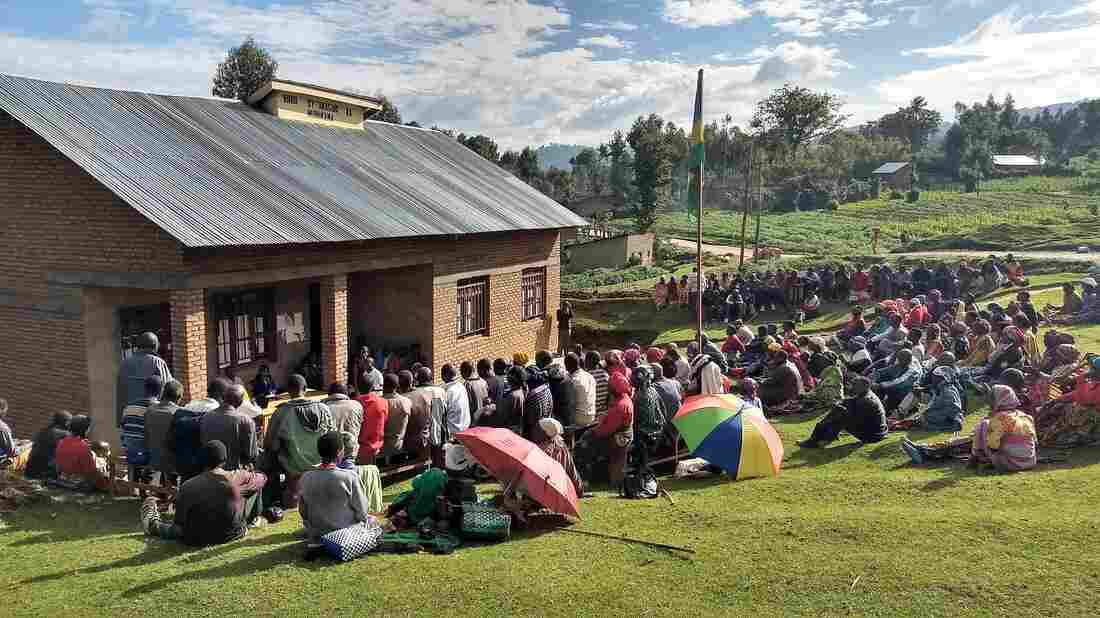 The Feed the Future Tworore Inkoko, Twunguke project hosts a meeting in the Gataraga sector of Rwanda to recruit farmers to grow chickens. If the farmers commit to four days of training and pass a competency test, they are given a backyard coop worth about $625, as well as the means to obtain 100 day-old chicks, vaccines, feed and technical advice. Emily Urban/NPR hide caption 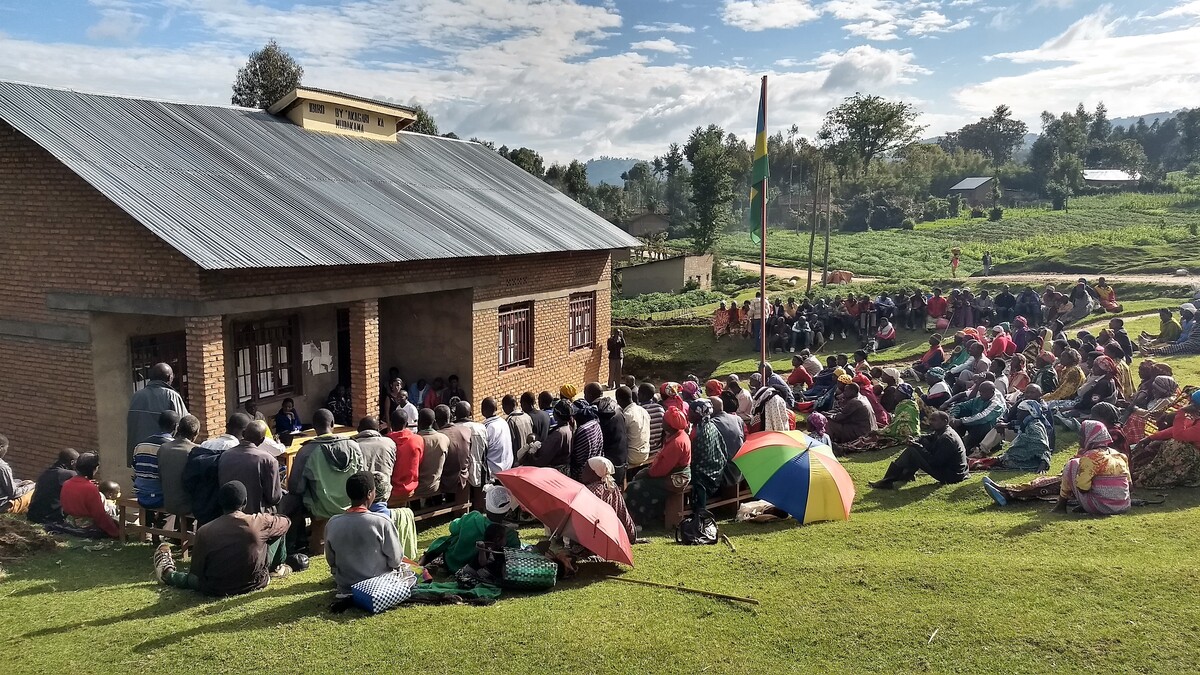 The Feed the Future Tworore Inkoko, Twunguke project hosts a meeting in the Gataraga sector of Rwanda to recruit farmers to grow chickens. If the farmers commit to four days of training and pass a competency test, they are given a backyard coop worth about $625, as well as the means to obtain 100 day-old chicks, vaccines, feed and technical advice.

The chicken business has been very, very good to Donnie Smith, the former chief executive of Tyson Foods. Now Smith, 58, wants to share his wealth — and his fervent belief in the power of chickens — with subsistence farmers in Musanze, a poverty-stricken district of Rwanda.

With USAID and the University of Tennessee, where he is a trustee, Smith is the driving force behind a $2 million program called Feed the Future Tworore Inkoko, Twunguke, which means "Let's raise chickens and make a profit." Its immediate goal is to lift the incomes and improve the nutrition of about 750 rural farmers; if all goes according to plan, many thousands of farmers will follow the original cohort.

All has not gone according to plan.

Instead, the effort is a textbook example of what can go awry when experts arrive in a distant place with good intentions and a solid understanding of what works in the U.S., but without much grounding in a local economy or culture. Rwandan farmers, for example, are more likely to own goats than poultry, so they had to be taught to raise chickens. (Many had never eaten chicken.) More important, this small, landlocked central African nation lacks the physical and economic infrastructure needed to support a modern chicken industry. So it's hard to see how the farmers will be able to raise chickens for profit once aid money goes away.

What's more, the entire undertaking is expensive — it will cost more than $2,300 per farmer, assuming that the target of reaching 750 farm families can be met. Nearly halfway through its three-year lifespan, the project has signed up about 170 farmers.

"At the end of the day, I don't know if this is going to work," says Tom Gill, who oversees the project and holds the Smith Chair for International Sustainable Agriculture at the University of Tennessee.

Yes, that's the Smith Chair as in Donnie Smith, who with his wife Terry — they're both Tennessee grads — endowed the faculty position with a $3.2 million gift. Smith spent his entire 30-year career at Tyson, rising to become CEO for more than seven years before retiring in 2016. So strongly does he believe in chickens that he started a family foundation, called the African Sustainable Agriculture Project, which aims to bring the chicken business to Africa, beginning in Rwanda's northern province.

"I have always had a place in my heart for Africa and for the poor and to see the hungry fed," Smith says.

His imprint is all over the nascent chicken business in Rwanda. The Smiths' charitable foundation owns and operates a 10,000-hen layer farm in Rwanda that supplies OneEgg, a faith-based nonprofit that provides an egg a day to preschool students. Thanks to his ties with Tyson, the company — which, to be clear, does not operate in Rwanda — developed a curriculum to train Rwandan chicken farmers and designed their backyard coops. Tyson also supports OneEgg. 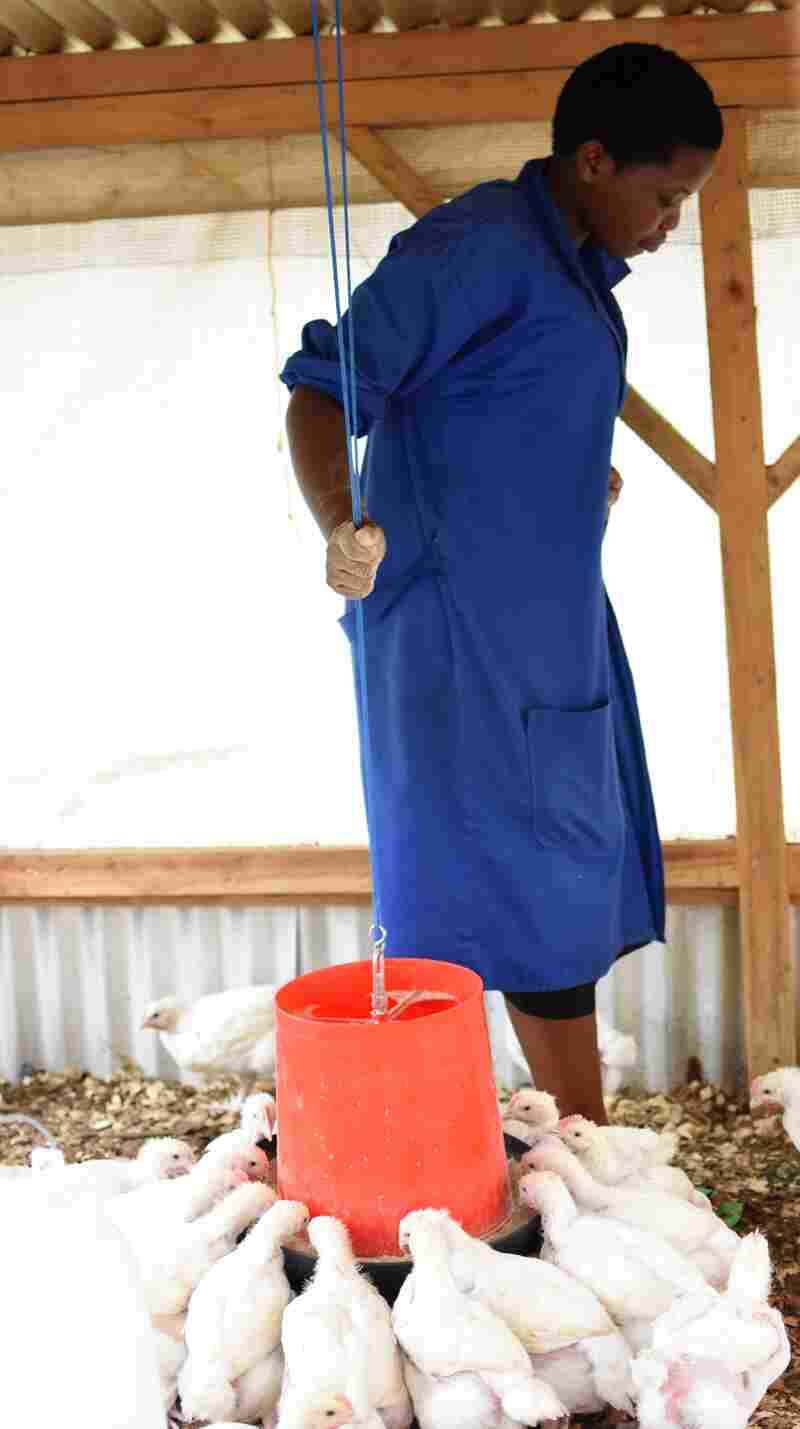 A former Tysons CEO started a program in Rwanda teaching farmers how to raise chickens, but it faces several challenges, including the fact that the country has no infrastructure to support it. David Ader hide caption 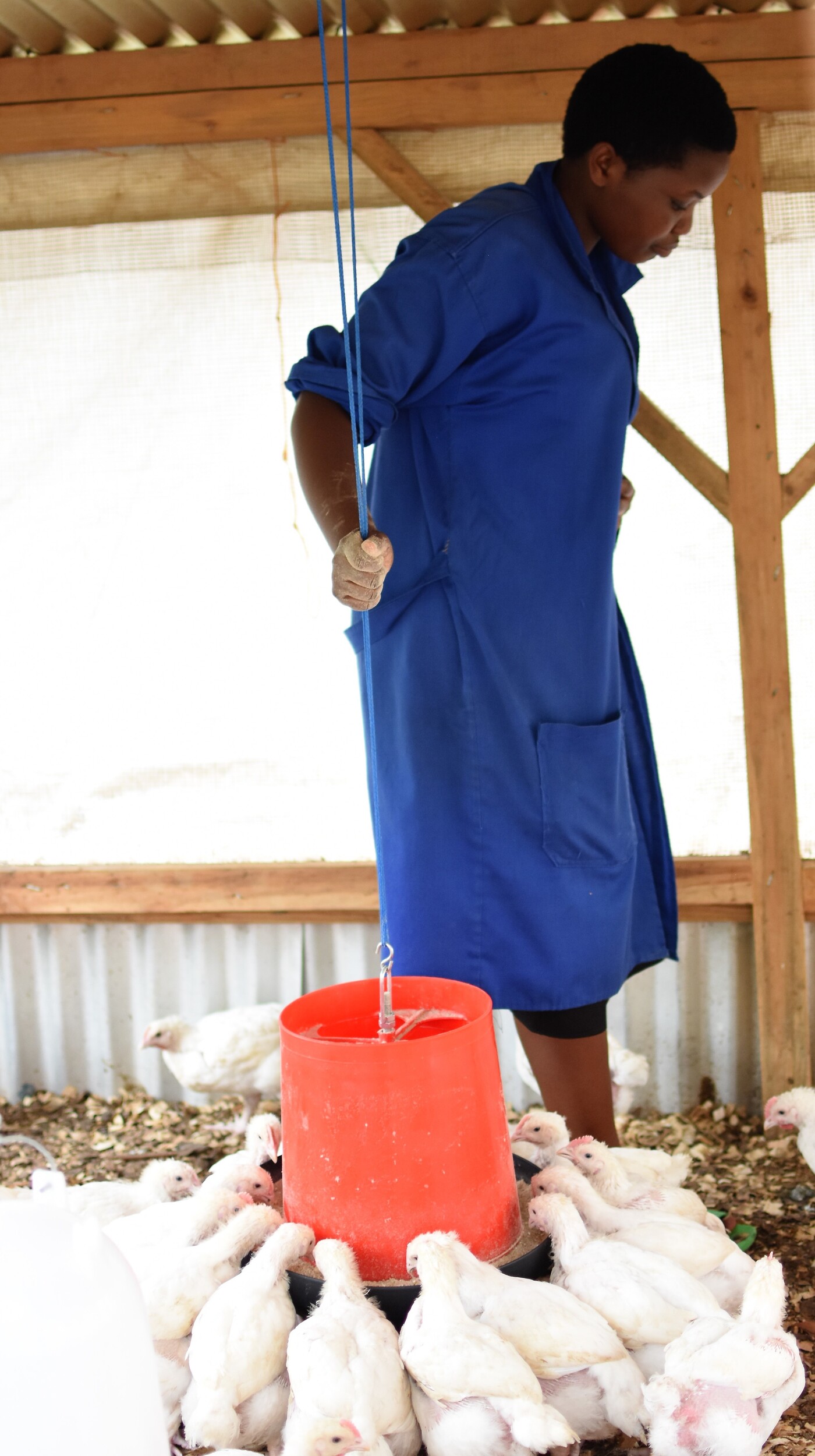 A former Tysons CEO started a program in Rwanda teaching farmers how to raise chickens, but it faces several challenges, including the fact that the country has no infrastructure to support it.

At the very least, the Rwanda project will provide new data in a long-running debate about the role of livestock in helping the world's extreme poor. Two years ago, in a blog post headlined Why I Would Raise Chickens, Microsoft-founder and philanthropist Bill Gates wrote that "just about anyone who's living in extreme poverty is better off if they have chickens." Through Heifer International, the best known of many charities that give livestock and training to the poor, Gates gave away 100,000 chickens to poor Africans.

Responding via an essay in Vox, Chris Blattman, a prominent development economist, cried foul. Blattman argued that distributing livestock is expensive, that "cash is easier and cheaper to hand out than chickens or skills," and that "the poor make good investment choices" when they are given money and allowed to decide how to spend it.

The Rwanda chicken project took root in Arkansas, home to Tyson Foods and to Smith's family foundation. There, a handful of well-to-do businessmen, motivated by their Christian faith, have organized "a significant movement that has been building a bridge from Arkansas to Rwanda," according to Dale Dawson, the former head of investment banking at Stevens Inc., a Little Rock-based firm whose clients included Tyson. Dawson is the founder and CEO of a nonprofit called Bridge2Rwanda, which brings Rwandan students to the U.S. to attend college; he persuaded Smith to visit Rwanda in 2012. "Dale is a great, great conduit and resource for the nation of Rwanda," Smith says.

Two Bridge2Rwanda students, the husband-and-wife team of Matthew Karugarma and Ritah Nshuti, now oversee the chicken business in Rwanda as the executives in charge of Zamura Feeds, a for-profit animal-feed mill owned by Smith's foundation. Both studied at the University of Arkansas, after which Smith, as Tyson's CEO, set them up with an internship at Tyson designed to teach them how to run a mill.

Nshuti oversees the USAID project. The farmers who participate get a good deal. If they commit to four days of training and pass a competency test, they are given a backyard coop worth about $625. They take out a line of credit, worth about $250, to buy a supply of 100 day-old chicks, vaccines and all the feed they need.

Technical experts visit the farmers every two weeks, and provide advice via cell phone. Once the chicks have grown to maturity, the farmers sell them back to Zamura, using the proceeds to repay their line of credit. Then the cycle begins again.

The farmers are doing well, by all accounts. Most learn how to turn day-old chicks into plump broilers in six weeks. They're rewarded with a nice profit that averages between $40 and $55 for each six-week cycle. That's real money for these poor farmers who, before the project began, earned less than $1 a day, a survey by USAID found.

Twizerimana Francois, a 47-year-old father of seven, ages 2 to 22, is a typical chicken farmer. His flock provides him with income to pay for his children's school fees and supplies, as well as manure to fertilize his vegetable garden. "My tomatoes have never flourished like this before," he says through an interpreter.

Nizeyimana Frosine, another newly minted poultry farmer, is a 34-year-old mother of three and a tailor who works from home. She and her husband have used their earnings from chickens to buy a calf that, she hopes, will grow up to provide milk for her family. "Our children will always have access to nutritious meals, unlike before," she says.

Says Donnie Smith: "It's just been so cool to see how much impact chickens can have."

This production model is not without controversy. It relies on so-called improved breeds of broilers — specifically, the Cobb 500, or comparable breeds, which have been bred to grow bigger and faster, while consuming less feed. Animal-welfare advocates object, saying fast-growing chickens suffer terribly because their bodies have outgrown the capacity of their bones, joints and muscles to support them.

Farmers are dependent on Zamura Feeds, just as most chicken farmers in the U.S., who work as contract farmers for the big producers, depend on giant companies like Tyson, Pilgrim's Pride, Sanderson Farms and Perdue Farms. Zamura provides the chicks, feed and vaccines, even as it has struggled to cobble together the rest of a chicken-industry supply chain.

Eggs, for example, must be flown in from Europe because there's no reliable local supply. The only nearby hatchery, where the eggs are then incubated at precise temperatures for 21 days until they hatch, has aging equipment. "It shut down for two months," Nshuti says.

Smith says his foundation might have to build a hatchery — at a cost of about $1 million — so that farmers can get a reliable supply of baby chicks. "We've got to solve this baby chick issue," he says. Otherwise, Zamura's institutional customers can't be provided with regular shipments of chicken.

Then there's the corn for chicken feed — it costs twice as much in Rwanda as it does in the U.S. because agricultural productivity is low. Meanwhile, the lack of a modern processing facility has forced Zamura to get into the processing business, at least for now.

Hardest of all has been selling chickens. "Our biggest challenge has been building up the market," says Tennessee's Gill, an expert in tropical agriculture with a PhD in ecology. "I don't know how to sell chickens in Rwanda." Demand is growing, but as recently as five years ago, few locals ate chicken.

"Rwanda is quite small," Nshuti says. "You don't want to saturate the market." She hopes to secure steady customers from hotels and restaurants in the capital, Kigali, which serve expats as well as Rwandans, as well as export some chickens to the Democratic Republic of the Congo.

None of these obstacles should have come as a shock. A 2014 report on family poultry production from the U.N.'s Food and Agriculture Organization says that teaching farmers to grow chickens isn't enough: "To achieve success and sustainability ... the formation of producer groups needs to be combined with a value chain approach."

Unclear, for now, is how the program will be sustained or expanded after the USAID grant runs out at the end of 2019. "That's a big question that we hope to have to have an answer to," Gill says. "We don't know yet."

Nshuti is optimistic. With its temperate climate and cool breezes, Rwanda is "a very good environment to grow chickens," she says. "We want these families to stay in the business forever."

Smith, too, takes the long view. "I'm going to spend the rest of my life ... developing the chicken business in Africa," he says.

This story was made possible by the Pulitzer Center on Crisis Reporting.