Accessibility links
Where's The Beef? Wyoming Ranchers Bet On Blockchain To Track It : The Salt By tagging cattle and updating their data about their free-range, grass-fed quality of life using blockchain, some ranchers are hoping to solve paper tracking pitfalls and sell their beef for more. 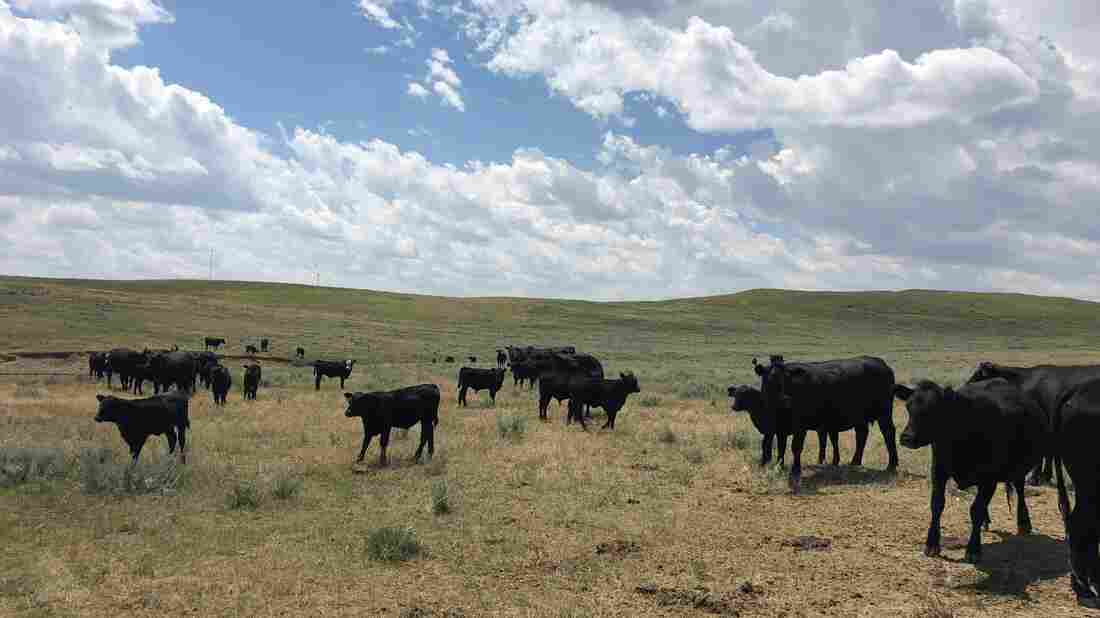 Some of the cattle grazing on the Persson Ranch are tracked using blockchain technology, which may allow consumers to know where their meat comes from and more. Kamila Kudelska/Wyoming Public Radio hide caption 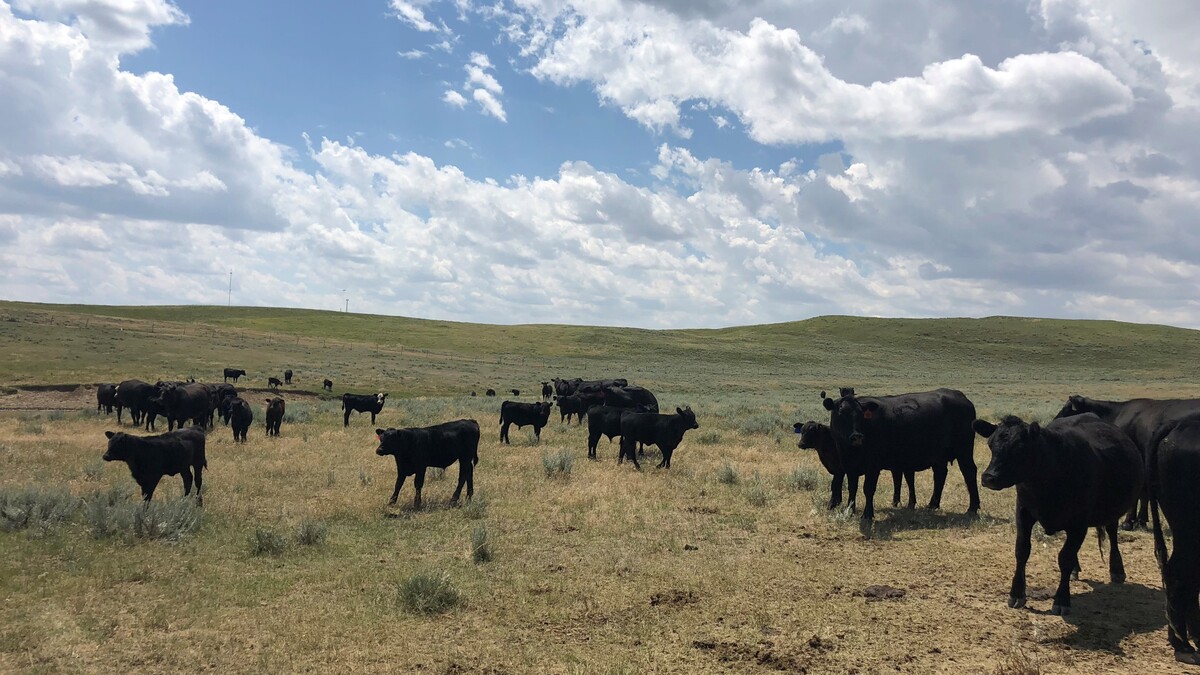 Some of the cattle grazing on the Persson Ranch are tracked using blockchain technology, which may allow consumers to know where their meat comes from and more.

Bonita Carlson grew up on a ranch in Northeast Wyoming. One time her mom was gone and she helped out with the laundry. Along with her clothes she threw in some of her dad's shirts.

She had accidentally thrown her dad's record book in with his shirts — all the information on their cattle. For Carlson, this is a perfect example of why it's important to merge the old heritage of the agriculture industry with the emerging technology known as blockchain.

Blockchain "is a global, online ledger, or network of ledgers, listing every single transaction in the world. It's verified immediately by other people using the system, which protects people's privacy, but is transparent enough to allow for oversight from anyone. No one group regulates it, so it's neutral and accessible to anyone with a computer," according to our colleagues over at the All Tech Considered blog.

If Carlson had it back then, it would have meant her father's records would still be intact, but blockchain's potential goes beyond that.

With blockchain, data like what the cattle eats, what type of vaccines it has received, and if it was ever sick will be available for anyone to see. So Wyoming ranchers who are turning to this technology believe they can brand their beef as superior. 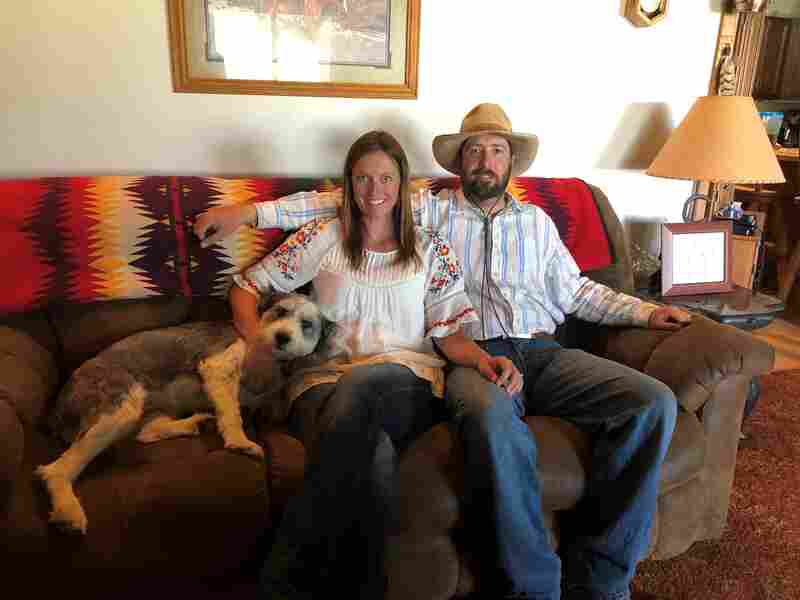 Bonita Carlson and Drew Persson in their home on Persson Ranch are betting big that blockchain can help them charge a premium for their cattle. Kamila Kudelska/Wyoming Public Radio hide caption 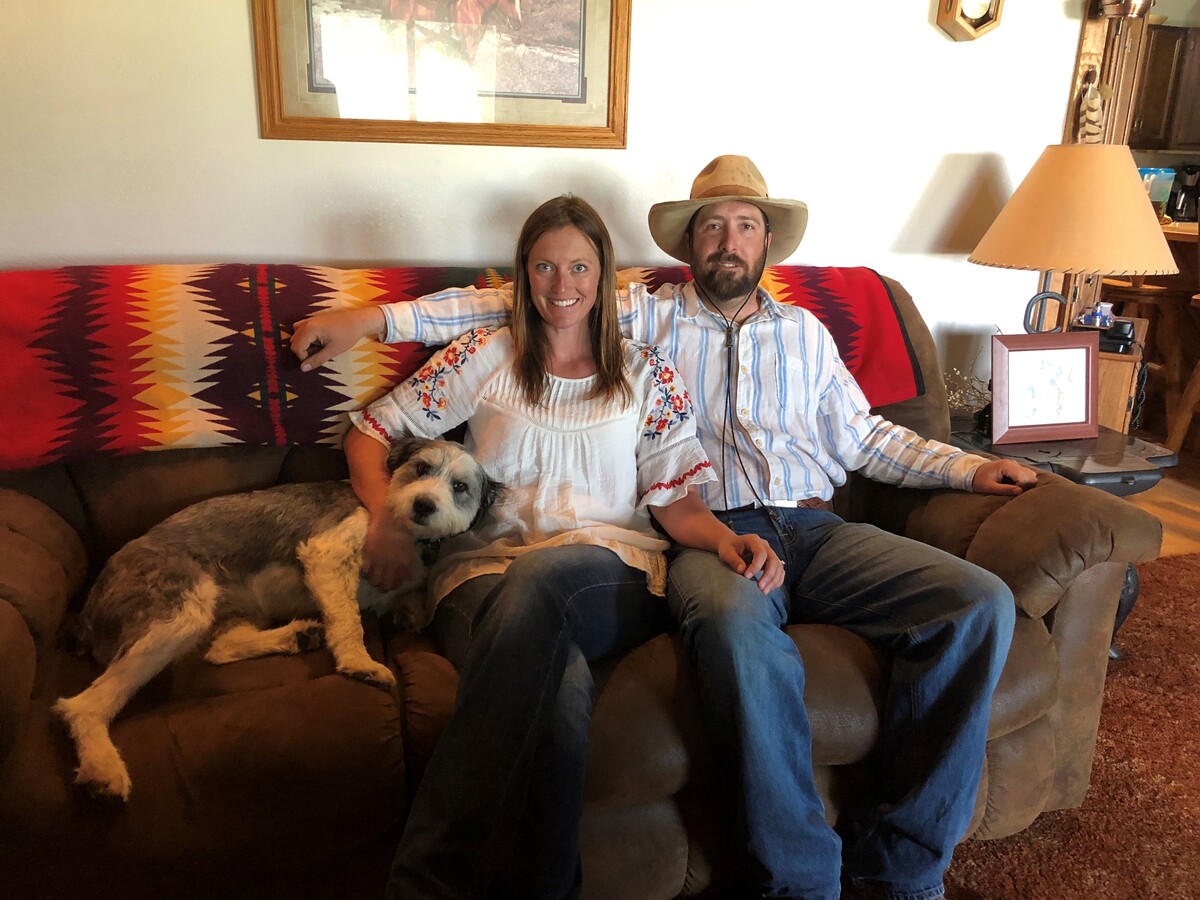 Bonita Carlson and Drew Persson in their home on Persson Ranch are betting big that blockchain can help them charge a premium for their cattle.

"Here in Wyoming, you know, the cattle are out in big open pastures and they eat grass that is available. There's plenty of it and they drink water as it falls from the skies into the reservoirs. We don't have cattle in small lots," says Carlson.

Basically, this means cattle are treated well in Wyoming. But by the time they're being packaged as beef, they've been mixed in with beef from other ranches, where the cattle may not be so lucky.

Beefchain.io is the company that's getting blockchain going on ranches in Wyoming.

"The unique methodology that each ranch uses ... what grass their fed on, that's all lost and consequently ranchers are getting pennies on the dollar," says Beefchain.io CEO Rob Jennings.

Until now it hasn't been worth it to Wyoming ranchers to try to keep their beef apart.

But Carlson and her fiancée Drew Perrson are betting on the new technology. They just tagged 250 steer calves at their ranch with blockchain tags. The cost: $5 per tag. By using these tags and keeping their cattle separate all the way through processing, they hope to increase the value of their cattle by ten to 20 percent.

The idea is that the data from that tag would stay with the beef all the way to the shelf, so a consumer could scan a code and see the information. The international market demands this kind of transparency.

"Traceability is of utmost importance to them [international markets]...food safety and guarding from food fraud, things being packaged that aren't what they say they are," says Jennings.

However, traceability already exists in agriculture and this is where some are wary about a new system. Dylan Yaga, a computer scientist at the National Institute of Standards and Technology, is finalizing a paper exploring when it's appropriate to use blockchain. He said industries need to to be careful about over-investing in new technologies that don't have a proven competitive advantage.

"There is a high level of hype around the use of blockchains, yet the technology is not well understood. It is not magical; it will not solve all problems," Yaga's draft paper says.

For example, someone using the system would need to figure out a way to change data, and agree on what would be a "valid transaction."

"If you got a problem that sounds like it could be solved by blockchain, absolutely look into it, explore the technology," says Yaga. "But there's other technologies out there in existence that's been around much longer that could possibly be employed to solve the same problem."

In the cattle industry, many use RFID tags, attached to calves' ears. RFID tags track similar data points as blockchain does, but the data can later be manipulated. With Beefchain, none of the data points can be deleted or changed. Mistakes have to be noted with a correction.

Ultimately, Beefchain hopes that as soon as next year, consumers will be able to go to a store, scan a QR code and learn about the life their beef led before they buy.

And Carlson and Perrson are betting that their customers will want to do just that.