Accessibility links
Beer, Drinking Water And Fish: Tiny Plastic Is Everywhere : The Salt Plastic trash less than 5 millimeters long is in the things we eat and drink, and the air we breathe. Scientists are just beginning to study where it comes from and how it might affect our health. 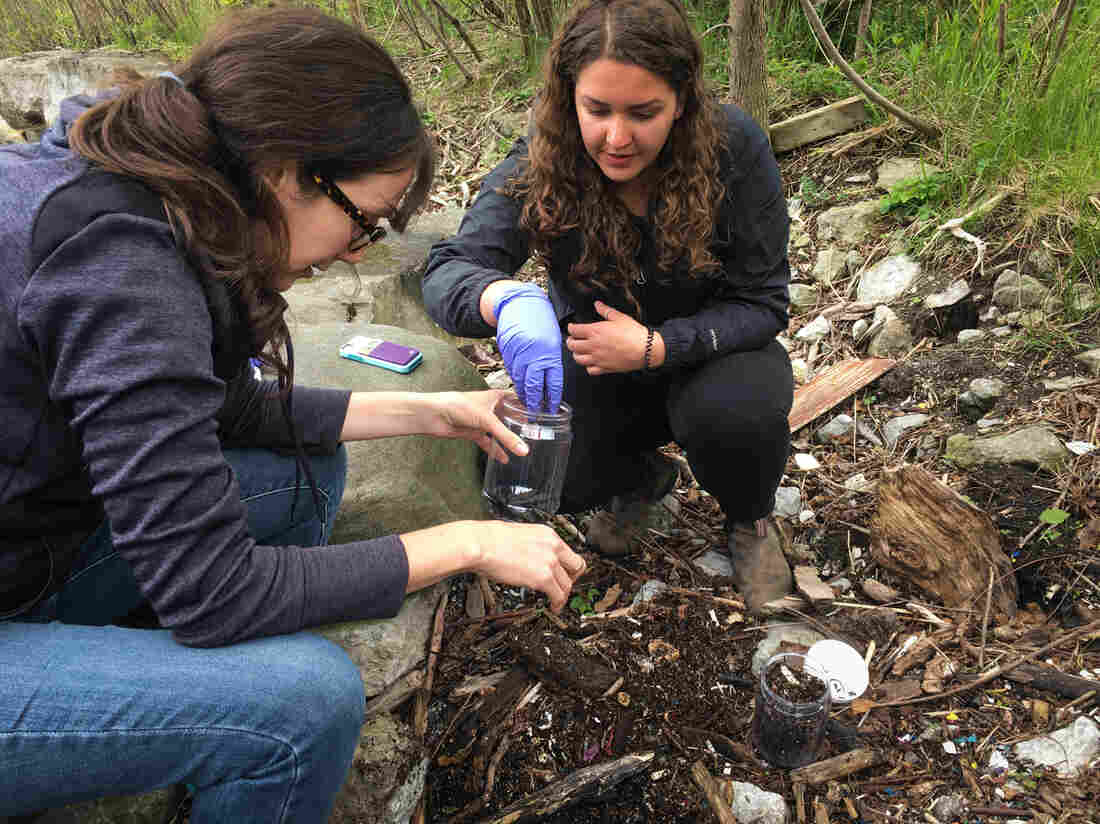 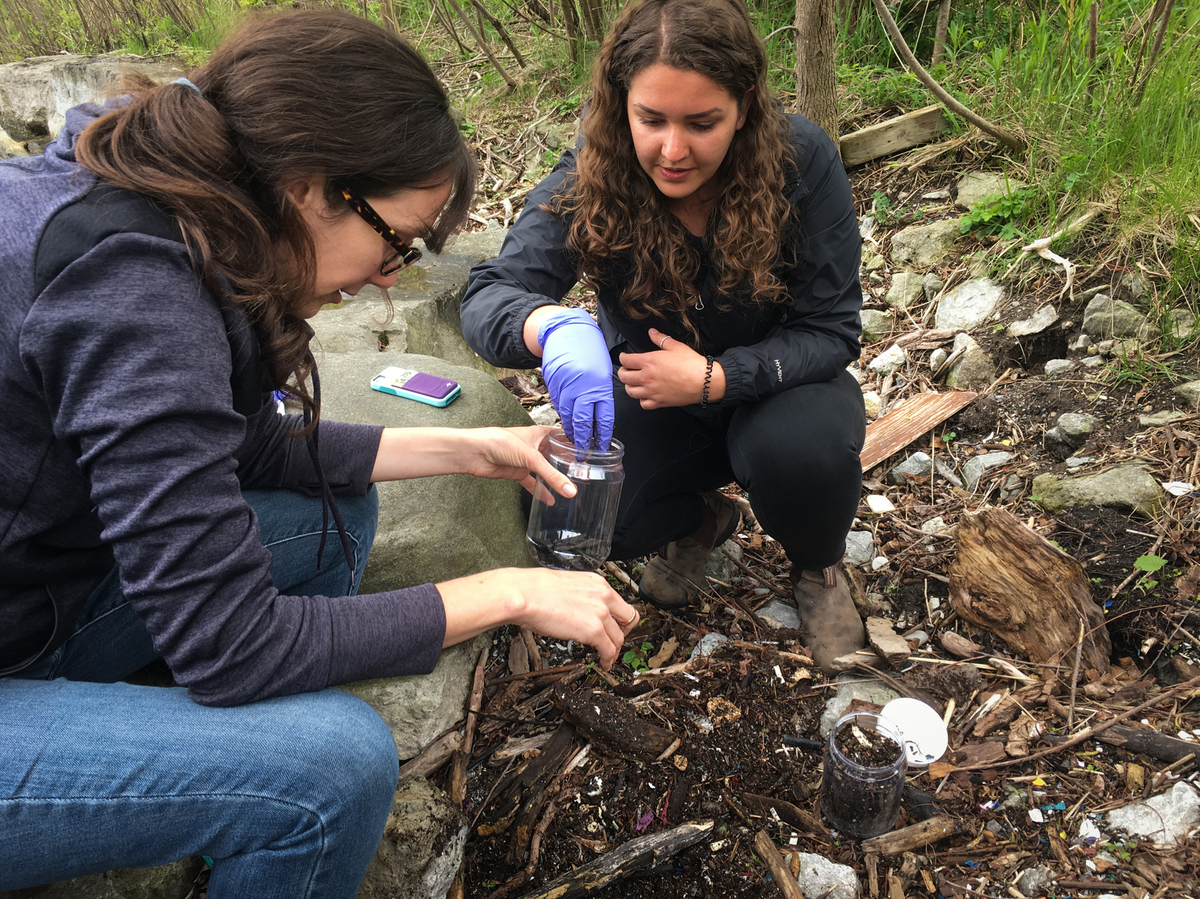 Ecologist Chelsea Rochman (left) and researcher Kennedy Bucci dig through washed-up debris along Lake Ontario. They're looking for small particles of plastic that make their way into oceans, rivers and lakes.

Plastic trash is littering the land and fouling rivers and oceans. But what we can see is only a small fraction of what's out there.

Since modern plastic was first mass-produced, 8 billion tons have been manufactured. And when it's thrown away, it doesn't just disappear. Much of it crumbles into small pieces.

Scientists call the tiny pieces "microplastics" and define them as objects smaller than 5 millimeters — about the size of one of the letters on a computer keyboard. Researchers started to pay serious attention to microplastics in the environment about 15 years ago. They're in oceans, rivers and lakes. They're also in soil. Recent research in Germany found that fertilizer made from composted household waste contains microplastics.

And, even more concerning, microplastics are in drinking water. In beer. In sea salt. In fish and shellfish. How microplastics get into animals is something of a mystery, and Chelsea Rochman is trying to solve it.

Rochman is an ecologist at the University of Toronto. She studies how plastic works its way into the food chain, from tiny plankton to fish larvae to fish, including fish we eat. 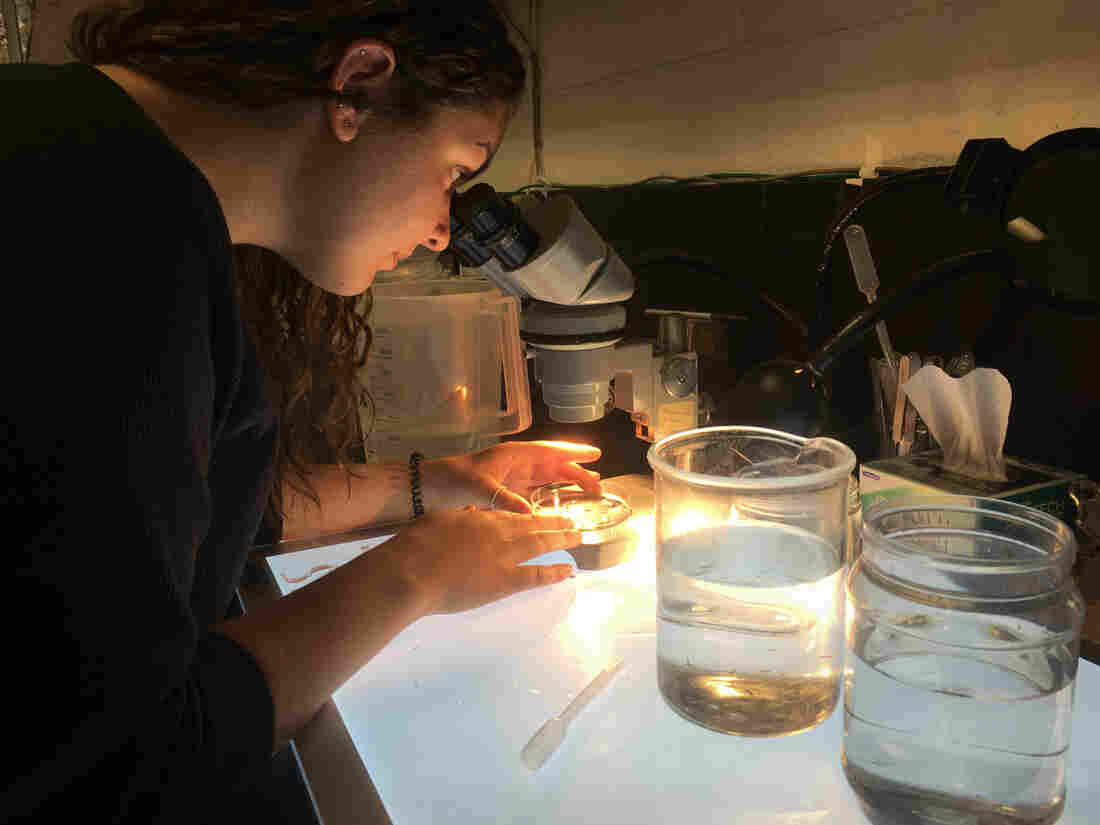 Bucci uses a microscope to look at a fathead minnow larva that has ingested plastic particles. Chris Joyce/NPR hide caption 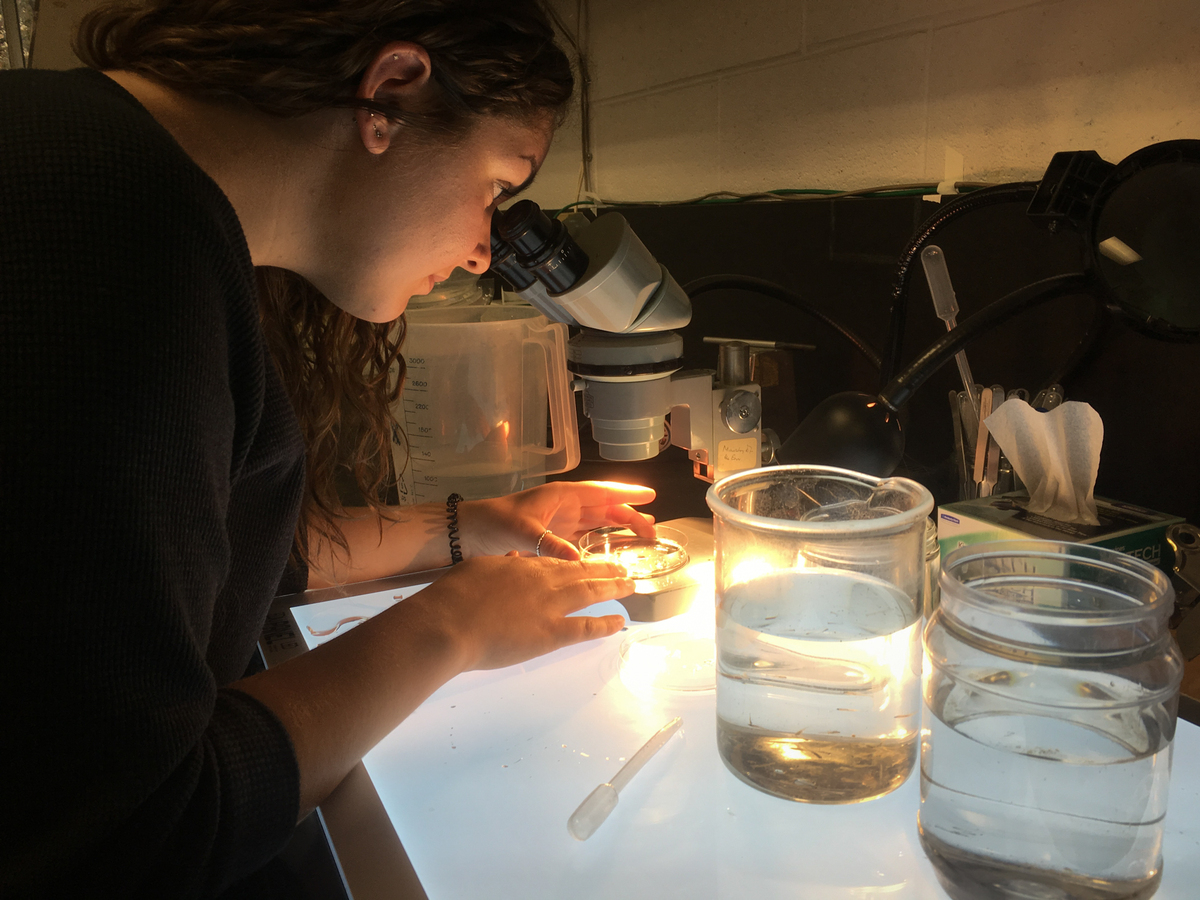 Bucci uses a microscope to look at a fathead minnow larva that has ingested plastic particles.

Rochman says she has always loved cleaning up. She remembers how, as a 6-year-old, she puzzled her parents by volunteering to clean the house.

In high school in Arizona she got even more ambitious. "I used to take my friends into the desert and clean up a mile of trash every Earth Day," she says. "I remember finding weird old dolls and strange old toys that I thought were creepy, but that I would also keep."

As a graduate student, she landed a spot on a research vessel to visit the infamous floating garbage patch in the Pacific Ocean. She and the other scientists on the trip were supposed to count the plastic as it drifted by.

But something was wrong. "We're looking and it's, like, basically a soup of confetti, of tiny little plastic bits everywhere," she remembers. "Everyone just stops counting. [They] sat there, their backs up against the wall and said, 'OK, this is a real issue, [and it's] not an island of trash you can pick up."

To Rochman, a third thing was also clear: "The tiny stuff, for me as an ecologist, this is really getting into the food chain. You could spend a career studying this stuff." 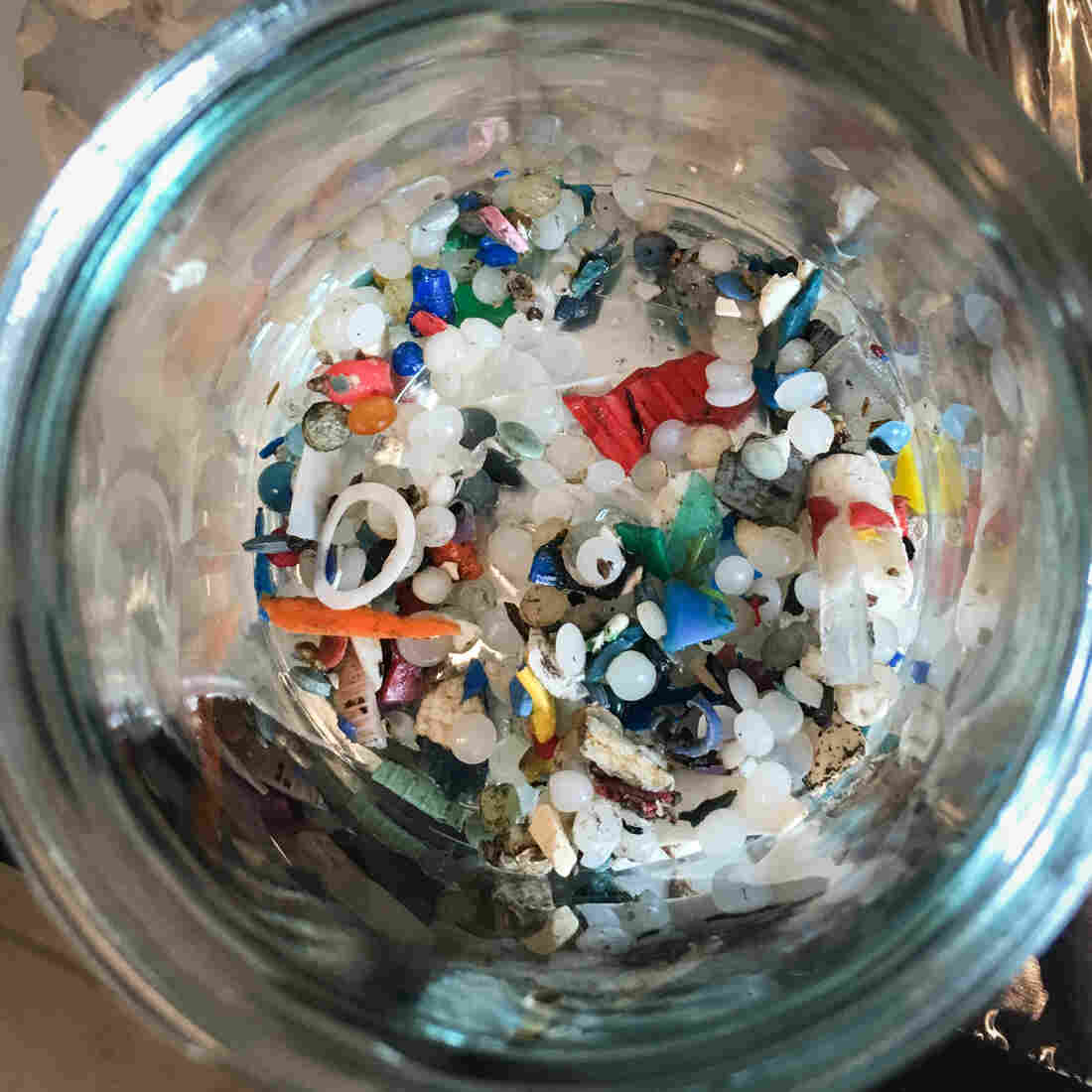 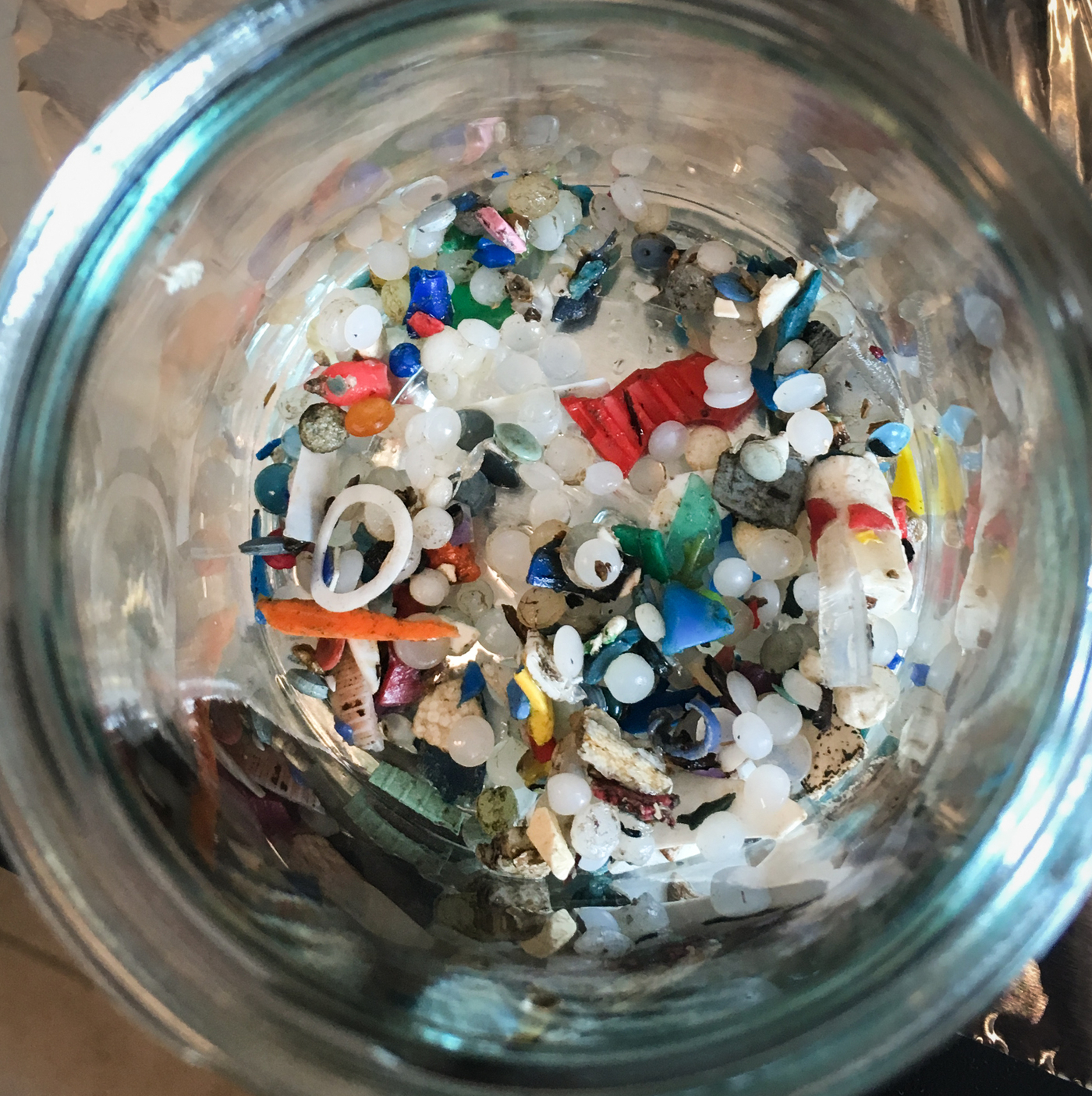 A world of plastic

A typical day for Rochman might start alongside sparkling Lake Ontario, where parks line the shore and joggers and picnickers enjoy the shoreline scenery. The lake, however, hides a mostly invisible menace.

To see it, Rochman's student, Kennedy Bucci, brings us to an inlet that's ankle-deep in washed-up debris. An apartment building looms overhead. They squat down, reach into the muck and quickly find what they're looking for. "I'm digging and just finding more and more," Rochman says. "Like whole bottle caps. This is insane."

"It's so ingrained in the soil," says Bucci.

She comes here regularly to collect plastic for Rochman's research. They work quickly, filling a jar with bits of plastic. Rochman, who's not wearing gloves, inadvertently picks up something she wishes she hadn't. "Oh!" she laughs, flinging it aside. "That's why you've got gloves on," she tells Bucci, and then gets right back to digging.

Since she started studying microplastics, Rochman has found them in the outflow from sewage treatment plants. And they've shown up in insects, worms, clams, fish and birds. 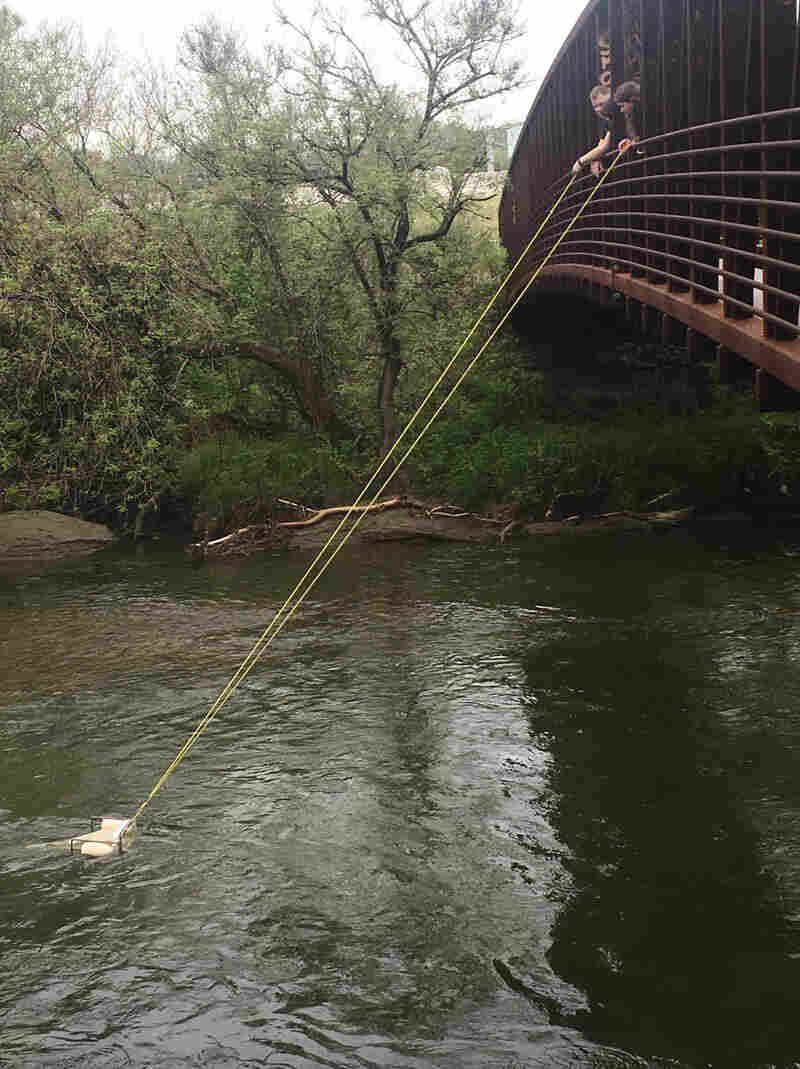 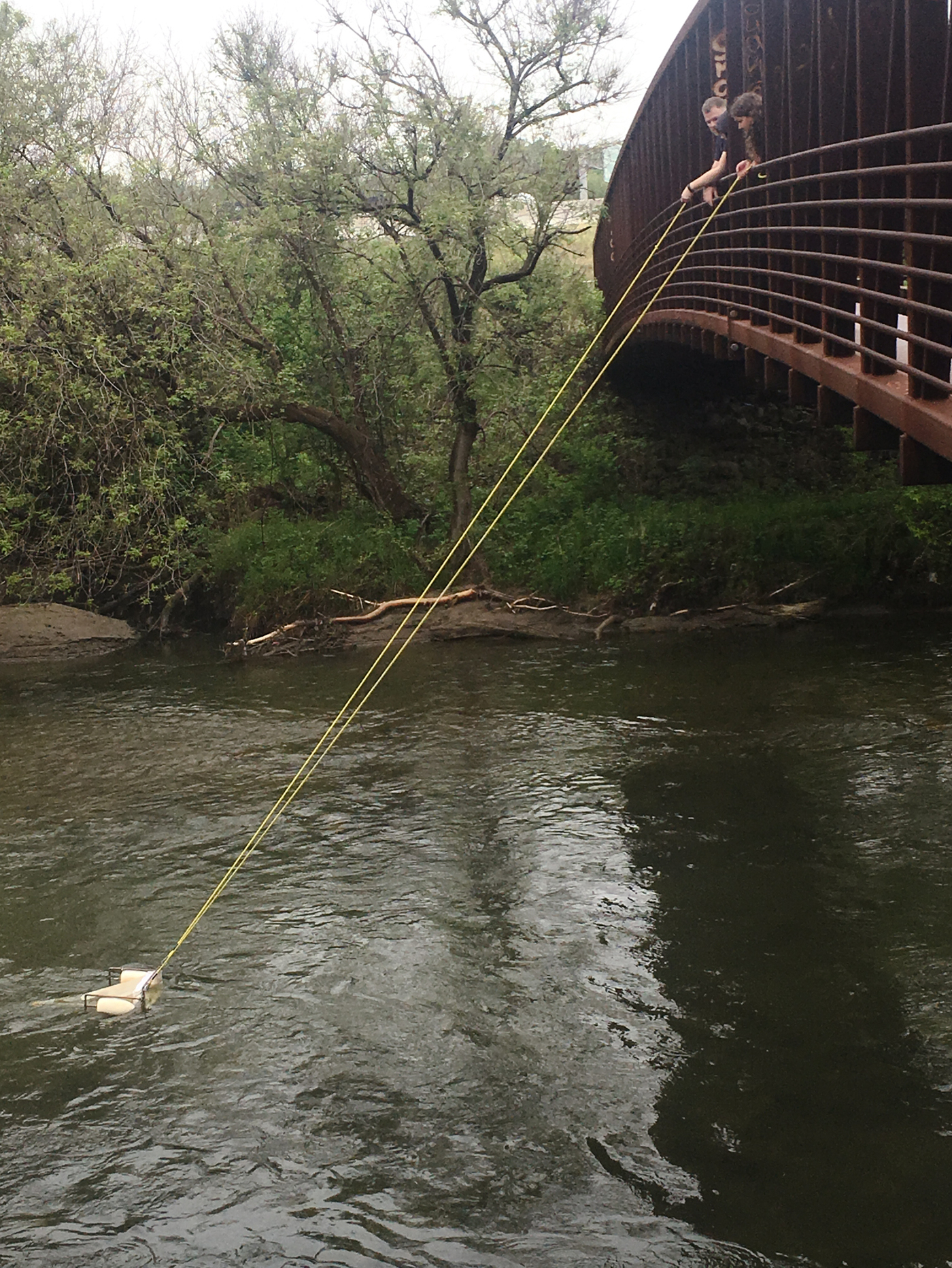 Rochman's scientific team drops a net into a stream in Toronto to collect tiny floating pieces of plastic.

To study how that happens, Bucci makes her own microplastics from the morning's collection. She takes a postage stamp-size piece of black plastic from the jar, and grinds it into particles using a coffee grinder. "So this is the plastic that I feed to the fish," she says.

The plastic particles go into beakers of water containing fish larvae from fathead minnows, the test-animals of choice in marine toxicology. Tanks full of them line the walls of the lab.

Bucci uses a pipette to draw out a bunch of larvae that have already been exposed to these ground-up plastic particles. The larva's gut is translucent. We can see right into it.

"You can see kind of a line of black, weirdly shaped black things," she points out. "Those are the microplastics." The larva has ingested them.

Rochman says microplastic particles can sicken or even kill larvae and fish in their experiments.

Plastic can also get into fish tissue, particularly plastic fibers from clothing such as fleece. Rochman found fleece fibers in fish from San Francisco Bay. She also looked in fish from Indonesia, a tropical country whose residents are not known for dressing in fleece. She found plastic in Indonesian fish guts, but no fibers, suggesting that fish bodies tell a story about what kind of plastic resides in local waters.

Rochman took this line of research a step further when she bought a washing machine for her lab and washed fleece clothing. Lots of plastic fibers came out in the filter she added to collect the wastewater. In fact, she has found microplastics floating in the air. "If you put a piece of double-sided sticky tape on a lab bench for an hour, you come back and it's got four plastic fibers on it," she says.

Most plastic is inert; it does not readily react chemically with other substances, and that's one reason it has been so successful. Plastic is resilient, durable and doesn't easily degrade. It's a vital part of medical equipment and has revolutionized packaging, especially food storage.

But, over time, plastic can break down and shed the chemicals that make it useful, such as phthalates and bisphenol A. These substances are common in the environment and their effects on human health are of concern to public health scientists and advocates, but few large-scale, definitive studies have been done.

Plastic also attracts other chemicals in the water that latch onto it, including toxic industrial compounds like polychlorinated biphenyls, or PCBs. Plastic becomes a chemical Trojan horse. 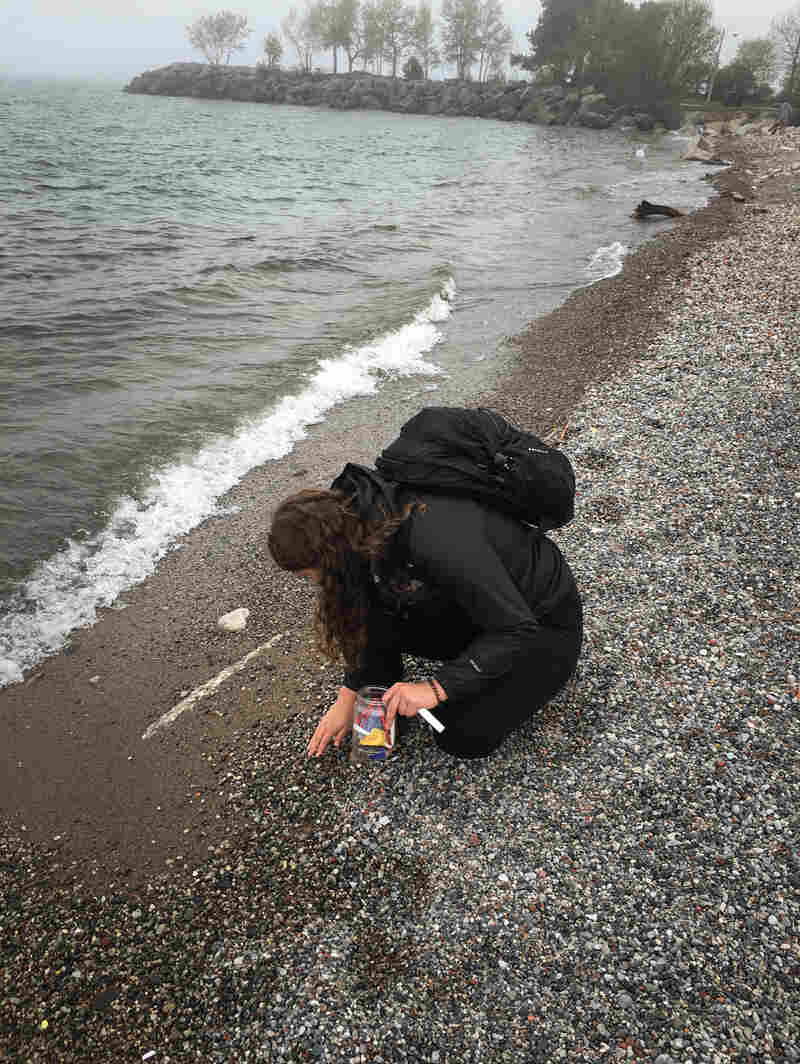 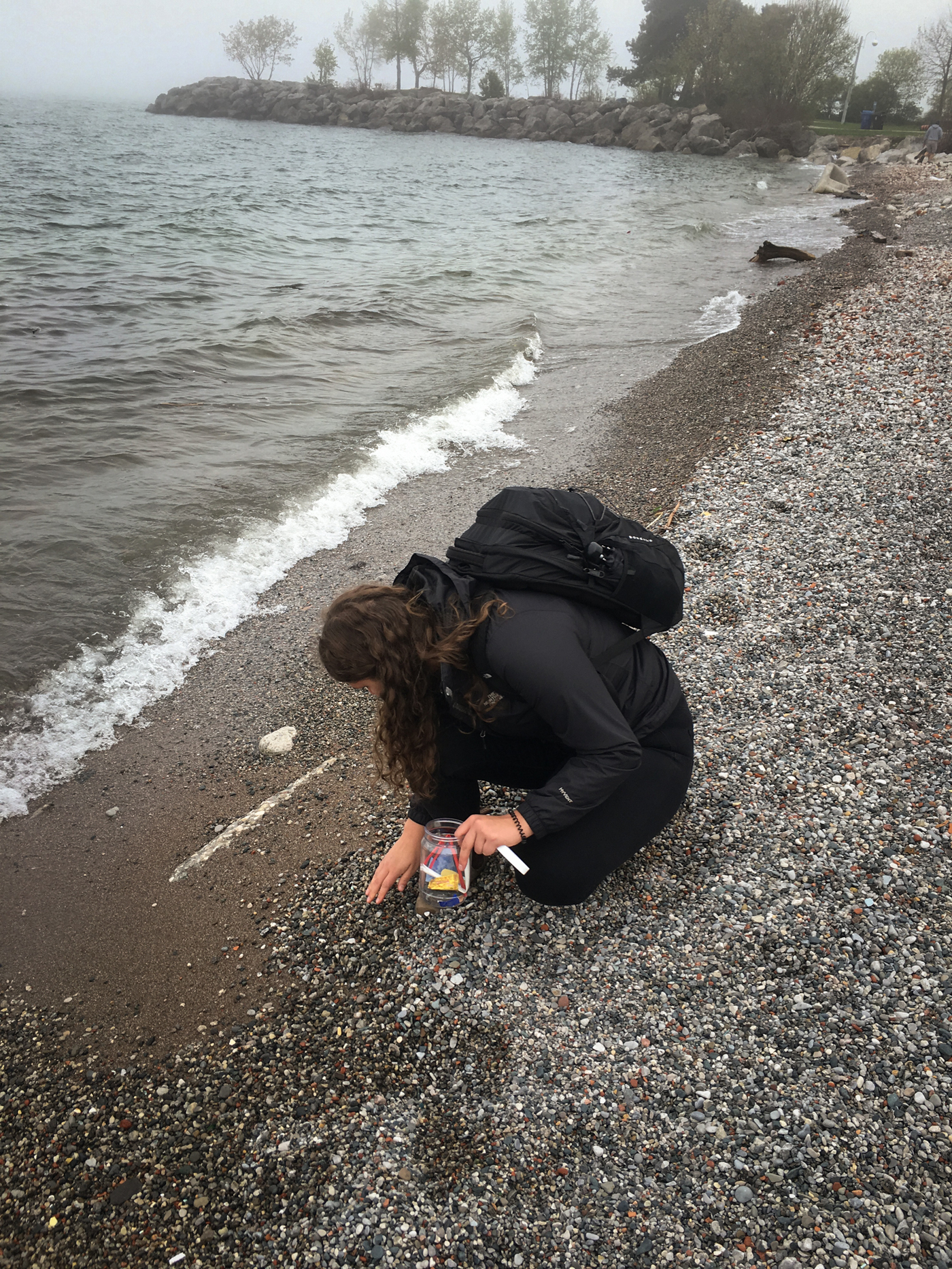 Researcher Kennedy Bucci collects plastics from the shore of Lake Ontario in Toronto.

Tracking all those chemicals is researcher Clara Thaysen's job.

"Right now we're starting with the common types of plastic, so polyethylene, polypropylene [and] polystyrene," she explains.

"But, there's..." she pauses and sighs. "There's tons." Plastic comes in many forms, with a wide variety of chemical additives depending on how the plastic is used. What happens to plastic over decades just hasn't been studied deeply.

"This happens all the time," says Thaysen. "We invent something that seems really great and ... we don't think and we become so dependent on it."

Rochman notes that this kind of research is relatively new; most of the environmental studies on microplastics have come out within the past 10 years.

"The things we don't know," she says, are daunting. "What are all the sources where it's coming from, so that we can think about where to turn it off? And once it gets in the ocean, where does it go? Which is super-important because then we can understand how it impacts wildlife and humans."

She says she's ready to spend the rest of her career finding out.