Accessibility links
As Wildfires Rage, Smoke Chokes Out Farmworkers And Delays Some Crops : The Salt Smoke from wildfires is blanketing much of the West. That's ruining some crops and may be stunting others. And it's making it difficult or unsafe for laborers to pick the harvest. 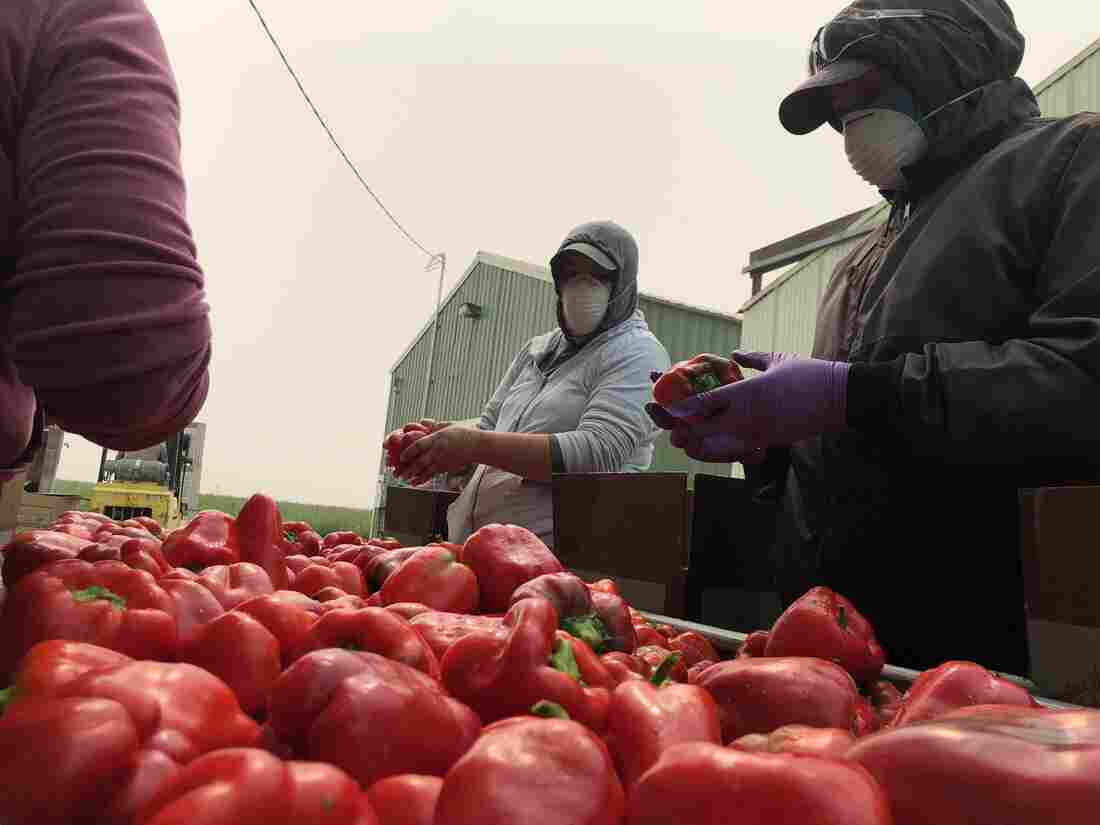 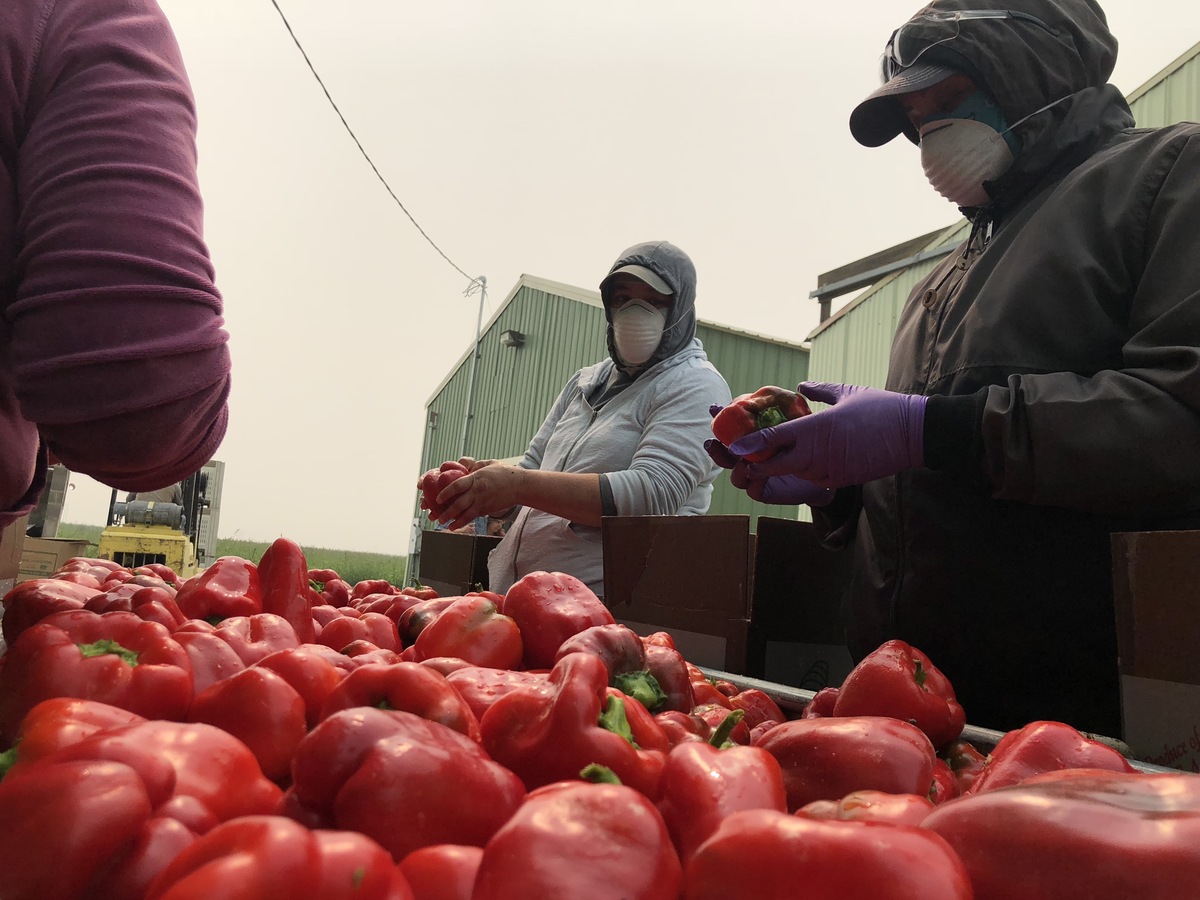 Workers in dust masks wash fresh red bell peppers in smoky conditions outside of Eltopia, Wash. Even with the masks, the smoke is still causing tight chests, itchy eyes and dry throats.

On Mike Pink's potato farm at dawn, the sun is an angry red ball low in the sky.

This summer, wildfire smoke has blanketed much of the West for days and weeks. And that smoke has come between the sun and ripening crops.

Pink watches as his year's work tumbles onto a fast-moving belt and into a waiting semi truck. He's got most of his 1,600-acre potato fields yet to harvest on his 3,000-acre farm, spread over about 40 miles between Burbank and Basin City, Wash. And this thick smoke makes him nervous.

"When we're not getting the sunlight like that, the plants aren't growing. They are just kind of sitting there and doing nothing," Pink says. "And every day that goes by, we lose a day of potential growth."

Lost sunlight and too much heat means that Pink's french fry potato crops aren't gaining precious tons. He estimates one week of smoke will cost him around $34,000 for just one of his many fields.

"A couple hundred dollars or three, four hundred dollars an acre that just goes away might be your profit for the year," Pink says. "And when you don't get that profit, I mean, there's always still those bills to pay. It makes things tough." 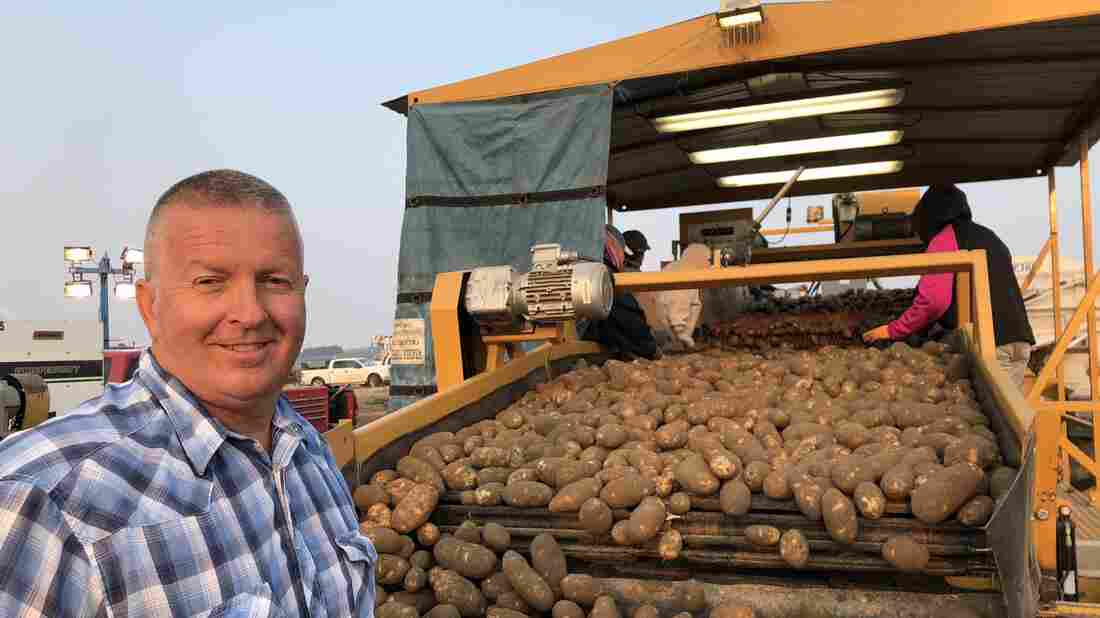 Mike Pink owns about 1,600 acres of potatoes. He says he can't afford a week of smoky conditions that might stall his crops. Anna King/Northwest News Network hide caption 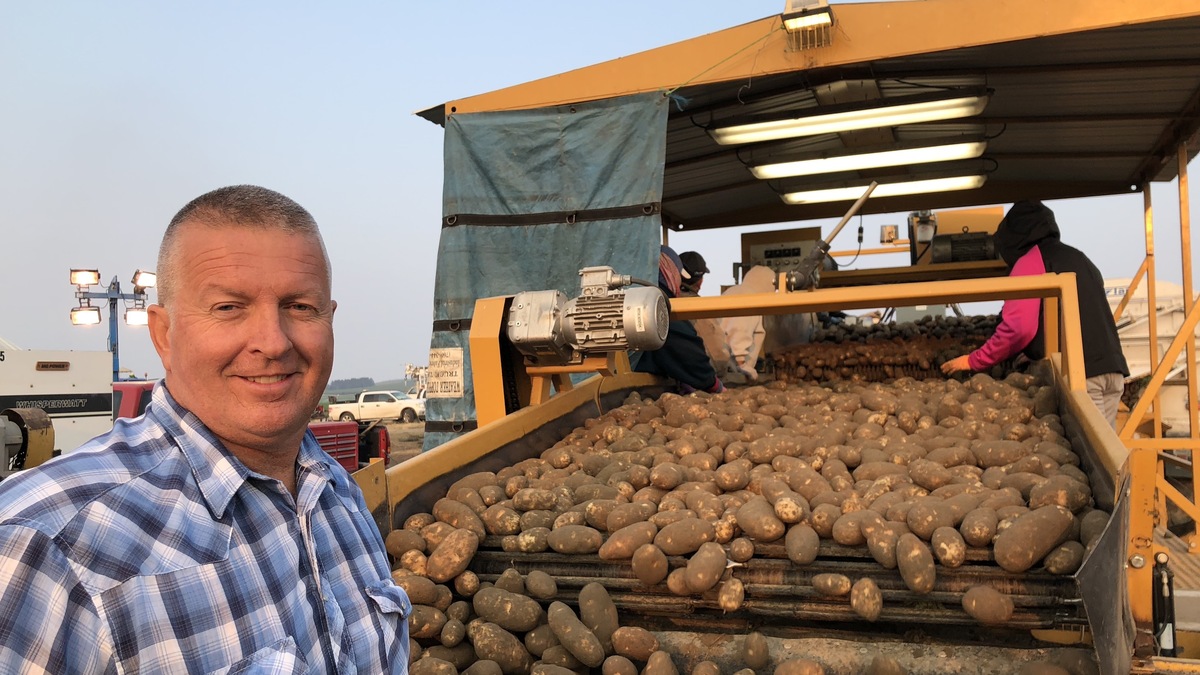 Mike Pink owns about 1,600 acres of potatoes. He says he can't afford a week of smoky conditions that might stall his crops.

The region's top potato scientists, at Washington State University, say it's difficult to sort out the effects of heat versus smoke at this time of year. Heat in the ground can also make potato plants shut down and stop gaining pounds.

"We don't have a lot of research on smoke because it's not something that we encounter frequently," says Tim Waters, a regional vegetable specialist for WSU. "Smoke is hard to replicate in a greenhouse. We have a lot of speculation, but not a lot of fact on what smoke will do to the crop."

At a nearby farm outside Eltopia, Wash., Alan Schreiber says he's been having to send his 30 workers home around noon. They're wearing masks, but even with them on, the smoke is making people sick — with tight chests, itchy eyes and dry throats.

"Right now we are doing a lot of picking. We picked melons and eggplants and peppers and tomatoes," Schreiber says. "And a tomato is not really heavy, but a five-gallon bucket, or a 35-pound crate is heavy and it's aerobic [work] -- and we just felt it wasn't safe for them to be out there, period."

The few remaining masked farmworkers are washing bell peppers in a massive metal trough, then boxing the bright-red veggies to ship.

Schreiber says he's got a labor shortage now. But this smoke is further complicating life by delaying harvest on those perishable peppers and melons.

"The same is true for tomatoes," Schreiber says. "If we are out because of smoke one more day, we will be picking crops and throwing them on the ground because of quality issues."

Schreiber says that translates into real money. He just got two pallets of melons rejected because they were too ripe. That's $1,440 lost — with many pallets yet to go.

At a nearby dairy, Kaleb Whitby is worried about his fresh dairy cows. Fresh means they've recently had calves and are giving good milk.

"They get milked once in the morning and two times in the evening," Whitby says. "This is their time to rest."

His 850 Holstein cattle usually squish together to loaf under an open-air shed when it's hot. But since the smoke haze was blocking some of the sun, the cows were spaced out around their roomier outdoor pen.

As Whitby waded in among them, the big animals formed a moving circle like a school of fish around him.

Whitby says he can't protect his cows from the particulates in the air, and he worries that will make them sick.

"If we start to see a little bit of pneumonia, then we'll really be worried," he says. "With the air out here, there isn't really anything we can do."

Farm children are also suffering in the smoke. Mothers are having to keep their children indoors on hot days — and some say they are running out of movies and fresh activities.

"Since yesterday we had to stop playing at 7 of the night because it was getting worse and we couldn't see well," says 9-year-old Kamila Zaragoza of Pasco. "Usually we play until 8 [o'clock]. I sometimes wonder from where does it [the smoke] come."

She and her masked younger brother and older sister sit quietly waiting for their parents, who run a taco truck at a farm stand off a remote country intersection.

Zaragoza says that her chest sometimes gets tight and her eyes get watery. 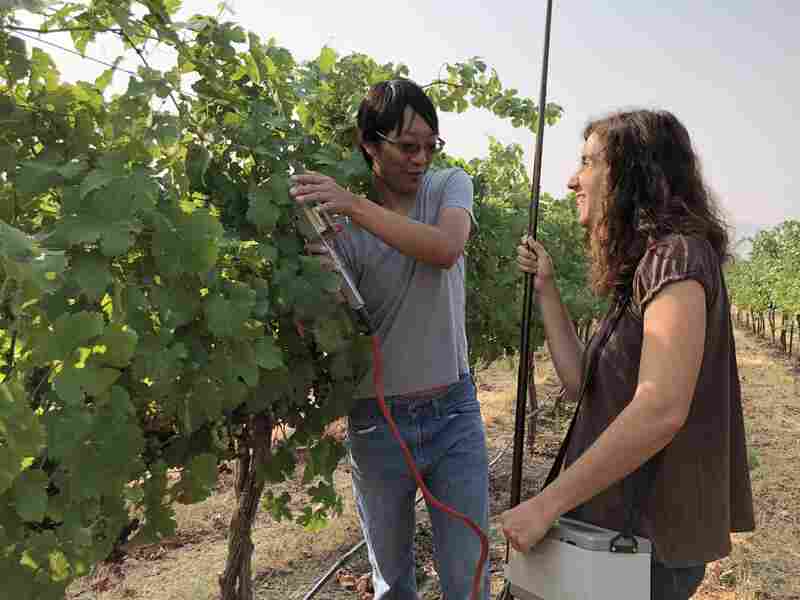 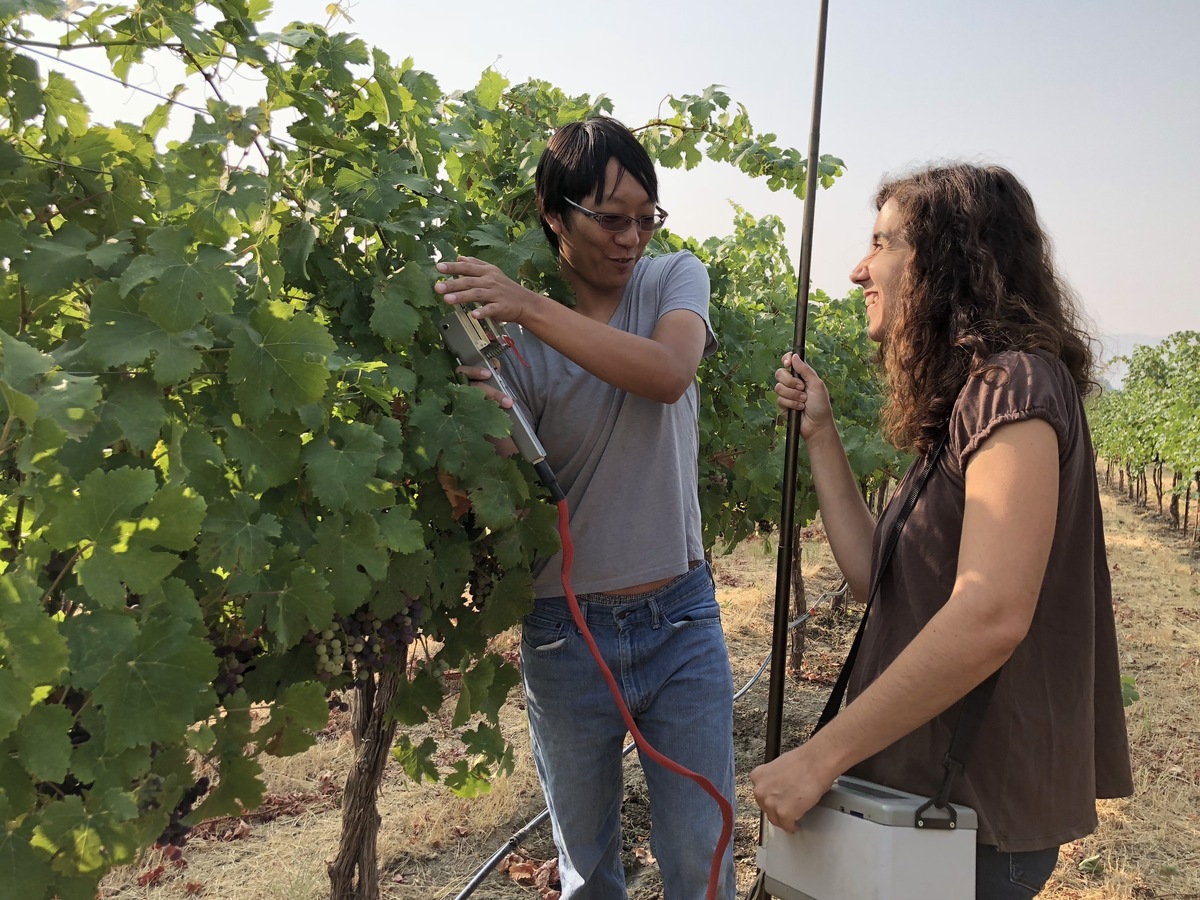 At Washington State University's Irrigated Agriculture Research and Extension Center in Prosser, Wash., Ben-Min Chang and Esther Hernández Montes use a infrared gas analyzer to see how wine grape vines are responding to the smoky conditions in the Northwest.

"I hope the smoke goes away," she says.

About an hour away in Prosser, Wash., wine grape scientists are trying to figure out what the smoke means in the long term for this lucrative Northwest crop.

Esther Hernández Montes and Ben-Min Chang wedge different grape leaves in the machine's sensor to see how much they are photosynthesizing.

Their supervisor, WSU professor of viticulture Markus Keller, says what his team has found so far is that the smoke particles diffuse and scatter the light like a photography softbox — lighting and ripening the grapes from all sides at once.

"You can see that the shadows of the floor are very mild right now," Keller says with a soft Swiss accent. "If the sun was really strong, they'd be almost black."

Usually grapes would ripen just on one side of the row at a time, as the sun moves through the sky. But with the smoke-diffused light, the grapes keep ripening on both sides of the rows, and get fewer sunburns. The problem? Those smoke compounds can also get into the leaves and grapes — creating a smoky flavor that's pretty undrinkable.

But as climate change is expected to increase the number and intensity of wildfires in the West, smoke may become a farmer's dependable fifth season.