Accessibility links
What Sparked An E. Coli Outbreak In Lettuce? Scientists Trace A Surprising Source : The Salt Vegetable farmers in Yuma, Ariz., are asking whether they can co-exist in the same valley with a large cattle feedlot. Those cattle are blamed for contaminating Romaine with toxic E. coli bacteria. 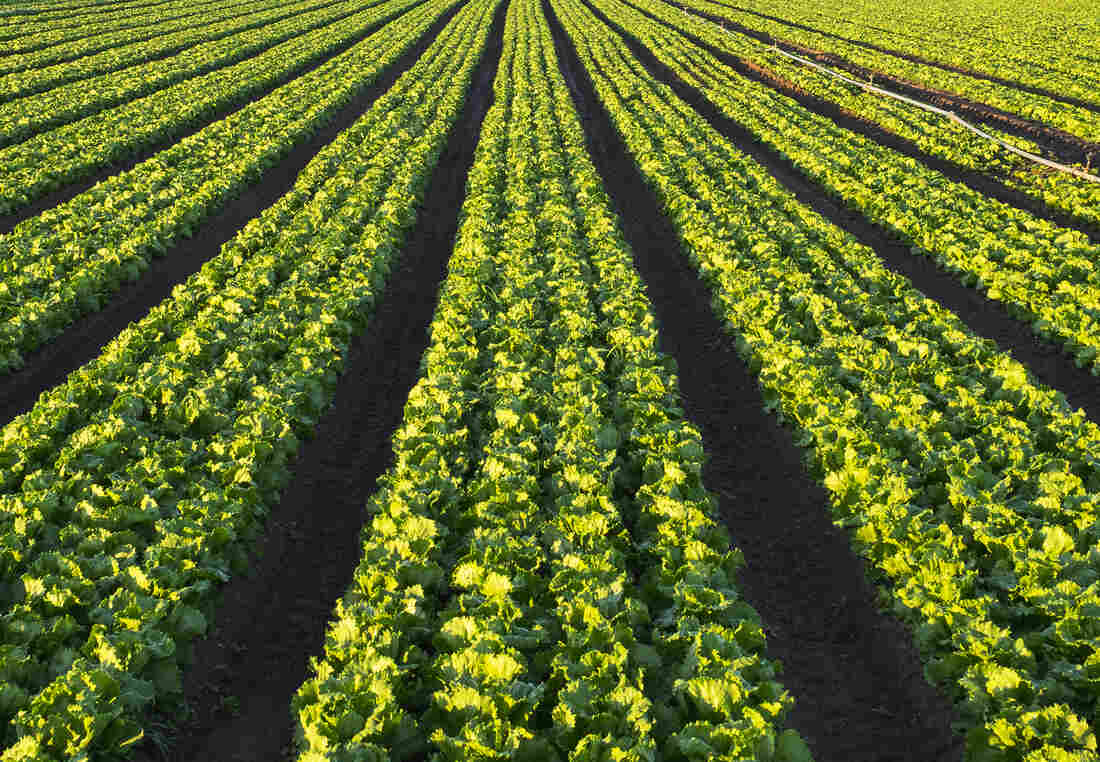 The Food and Drug Administration quickly identified romaine lettuce as the source of a months-long outbreak, but the foodborne illness investigation has been one of the agency's most complicated in years. Westend61/Getty Images hide caption 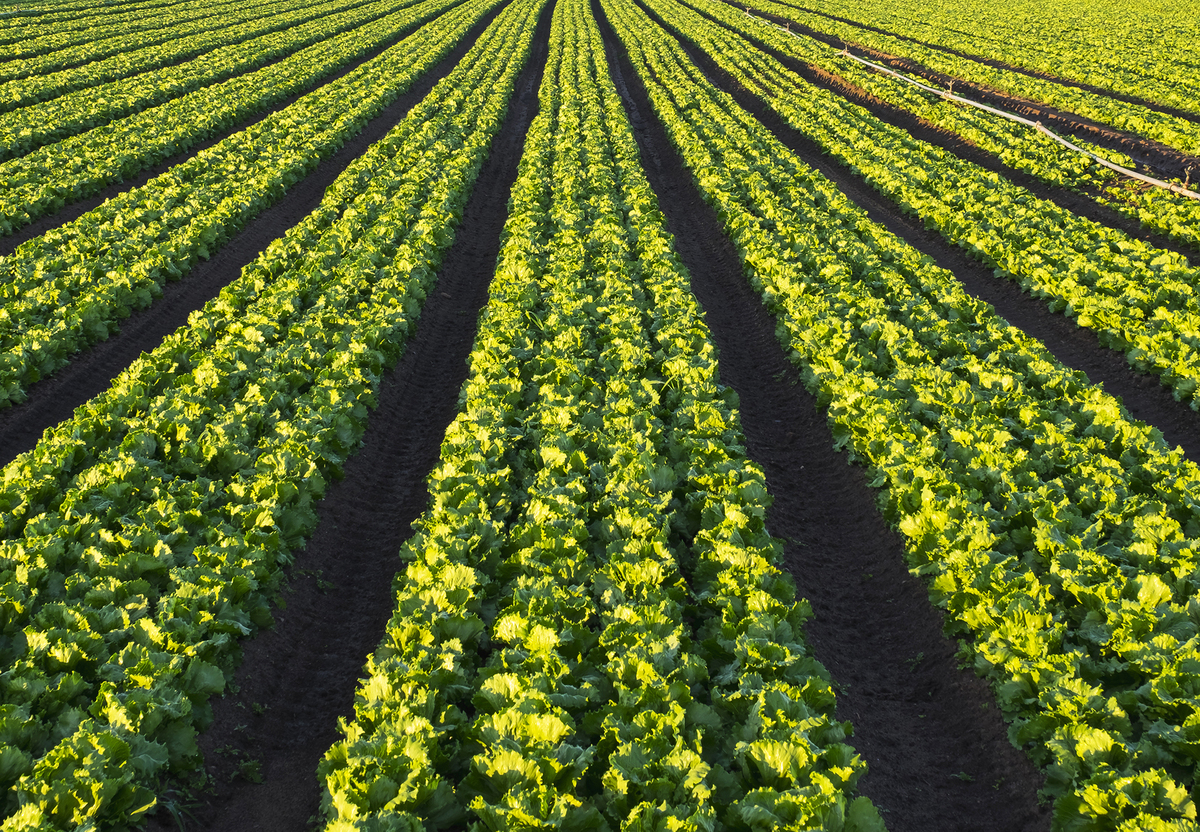 The Food and Drug Administration quickly identified romaine lettuce as the source of a months-long outbreak, but the foodborne illness investigation has been one of the agency's most complicated in years.

The illnesses started appearing in late March. Here and there, across the country, people were checking themselves in to hospitals, sick from toxic E. coli bacteria. At least 200 people got sick. Five of them died.

Investigators quickly identified romaine lettuce as the source of the outbreak, but have had trouble pinpointing the cause for months. Now, the Food and Drug Administration has a theory for how E. coli ended up on that lettuce. According to the FDA, it probably came from a large cattle feedlot at one end of a valley near Yuma, Ariz., which is one of the country's biggest lettuce-growing areas.

The finding has put lettuce growers in Yuma in a tough spot. The feedlot has been their neighbor for many years. Some vegetable farmers are wondering whether they can still co-exist with all those cattle nearby.

The investigation that led to this quandary has been long and sometimes frustrating.

It began with patients like Louise Fraser, 66, who checked herself in to the Hunterdon Medical Center in central New Jersey. Fraser was convinced that she knew what had taken her down: a fundraiser feast for the local fire department a day before she got sick.

"I was eating fried clams, pierogies, french fries, and then I topped it off by going to our local ice cream store and having ice cream. I'm thinking that's what made me sick," she says.

Within a few days, though, interviews with other sick people revealed a common thread. Nearly all of them, including Fraser, remembered eating something that contained romaine lettuce.

And investigators from the FDA were on the case, trying to track the contaminated lettuce back to its source. "Every moment is of the essence" during this phase, says Stephen Ostroff, deputy commissioner for food and veterinary medicine at the FDA.

They wanted to identify a specific batch of contaminated lettuce so they could order a recall. When the FDA's army of investigators knock on doors at restaurants and grocery stores, they say "show us your records as to the romaine lettuce that you were serving, or that you had sitting on the grocery store shelf on that day," Ostroff says.

But the trail was confusing. Some restaurants got their romaine from a bunch of processors. And processors sometimes used lettuce from a bunch of different farms and chopped it all up together. The investigators couldn't narrow it down, and "this was very frustrating," Ostroff says.

In those early days of the investigation, they only knew that the contaminated lettuce came from the lettuce growing area around Yuma, Ariz. At the time of the outbreak, Yuma was producing most of the country's lettuce.

Almost all of the lettuce in the U.S. comes from either Yuma or the Salinas Valley in California. The two areas take turns. California grows lettuce in the spring and summer; Yuma takes over in the fall and winter.

In mid-April, the FDA advised consumers to avoid any romaine lettuce from the Yuma region. Most consumers, though, couldn't tell from the packaging, or even from supermarket employees, whether their lettuce came from Yuma or somewhere else. Millions of them just threw their lettuce in the trash or stopped buying it — even in late April and May, when most of that lettuce was coming from California.

Meanwhile, the investigation continued. Many food safety experts expected it to lead to a single farm or a factory where the contamination happened. That's what happened during the last big E. coli outbreak that was linked to salad greens, in 2006, which investigators eventually blamed on wild pigs that got into a field of spinach in California. 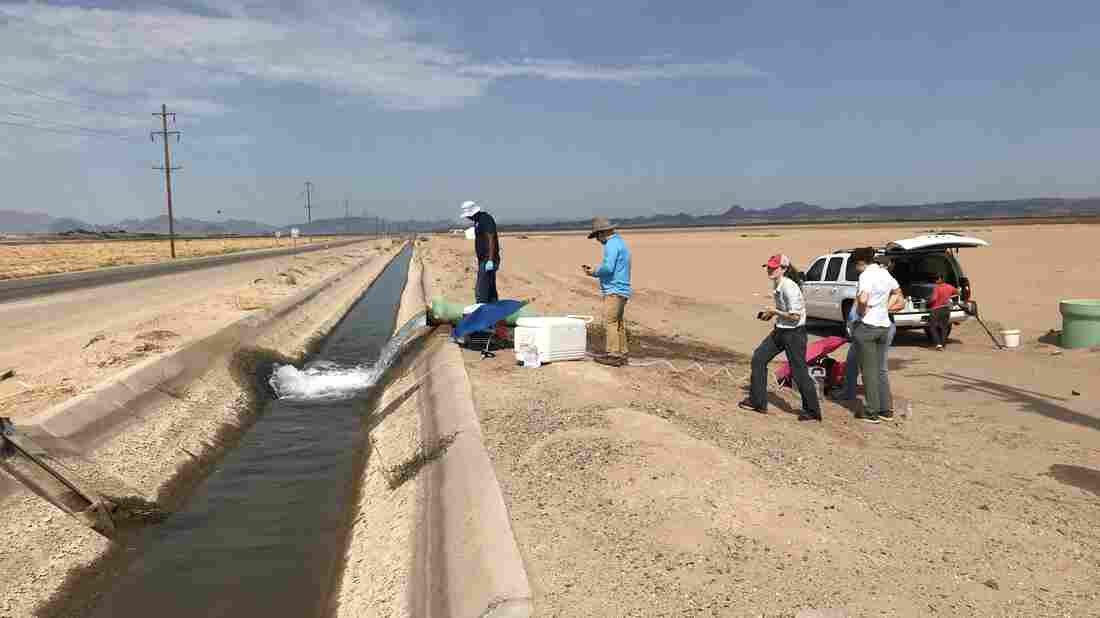 Scientists from the FDA and the University of Arizona test water from an irrigation ditch near Yuma, Ariz., in early August. The FDA found toxic E. coli in another irrigation canal less than a mile from this one. Dan Charles/NPR hide caption 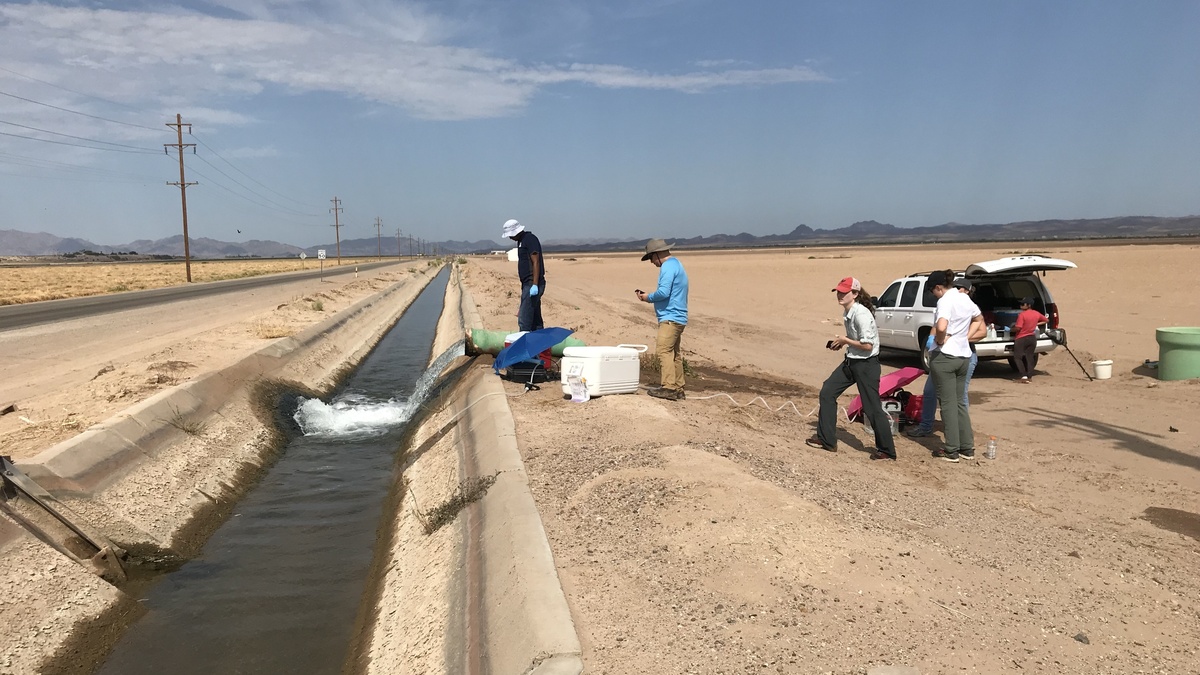 Scientists from the FDA and the University of Arizona test water from an irrigation ditch near Yuma, Ariz., in early August. The FDA found toxic E. coli in another irrigation canal less than a mile from this one.

"You sort of expect history to be a guide, and I think that most people in food safety expected a similar result to what we had in 2006," says Bill Marler, a lawyer who makes his living suing companies that sell food that makes people sick. He's representing about 100 people who got sick in this outbreak.

But in this case, it proved impossible. The trails of contaminated lettuce did not converge on any single point. Instead, there were lots of trails, leading to different processing plants and a bunch of different farms in Yuma, miles apart. The FDA even published a chart of the "traceback" pattern, just to show people how complicated it was. It was particularly frustrating, Ostroff says, "because it makes our job infinitely more difficult, in terms of explaining what happened."

Something mysterious had happened in the fields of Yuma.

Most of the farmers in Yuma didn't really want to talk about E. coli. It's not a pleasant topic. Steve Alameda is co-owner of Topflavor Farms, a big lettuce grower. His wide fields are mostly bare dirt right now, baking in the oppressive summer heat. But when the weather turns cooler in a few months, all the farms around here will be green with lettuce.

"This is a huge salad factory," he says. He's talking about the whole valley, 5 miles wide and 50 meandering miles long. During the vegetable-growing season, about a thousand trucks with 50 million pounds of products drive out of here every day.

To Rinse Or Not To Rinse: How Washing Some Foods Can Help You Avoid Illness

A few weeks ago, FDA investigators announced a break in the lettuce case. They found E. coli that exactly matched the genetic strain that had made people sick. It turned up in a canal that carries water to lots of different vegetable farms in this valley.

The canal runs right past a huge cattle feedlot, covering many acres. About 100,000 cows are standing there on bare ground, clustered around long troughs filled with corn and hay.

E. coli bacteria live in cattle. The FDA thinks that E. coli in manure from these cattle probably washed into the irrigation ditch, or blew into it, and water carried those bacteria into vegetable fields.

Alameda isn't completely convinced by this theory. It leaves a lot of questions unanswered. For instance, irrigation water doesn't typically touch the lettuce leaves, so how did the contamination happen? Why did it affect romaine lettuce and not the other kinds of lettuce and vegetables growing in those fields? And what happened this spring? After all, the cattle have been there for decades.

Channah Rock, a water quality specialist at the University of Arizona, says there are clues that point toward a slightly different theory. She thinks that dust from the feedlot might have blown in the wind and settled on romaine leaves that had been damaged by an unusual freeze, causing the leaves to "blister." Perhaps, she says, those damaged leaves were particularly vulnerable to E. coli contamination.

However it happened, though, the most likely explanation seems to be that these cattle were the source of the outbreak. That leaves Yuma's lettuce growers in a bind. They have to convince supermarkets and restaurants that it won't happen again, even though the cattle are still there.

"Make no mistake about it, we sell this as a healthy product that's safe, and when people lose confidence in that, we don't have anything," Alameda says.

Farmers know that they have to do something different, Alameda says. They're going to make sure lettuce fields are farther away from the cattle. Some farmers will start treating their irrigation water with chlorine to kill the bacteria, like drinking water.

There have even been conversations about doing something more drastic. Some lettuce growers are thinking that maybe they should band together and buy that feedlot from its current owner, Five Rivers Cattle Feeding, and shut it down.

For its part, the cattle company issued a statement that says while it has fully cooperated with federal investigators, it is unaware of any evidence specifically linking its operation to the outbreaks.