Accessibility links
Women Chefs Still Walk 'A Fine Line' In The Kitchen : The Salt While there have been big changes in the restaurant business in the last few decades, a new documentary on female chefs and work-life balance explores how little it has changed for women.

Women Chefs Still Walk 'A Fine Line' In The Kitchen

Women Chefs Still Walk 'A Fine Line' In The Kitchen 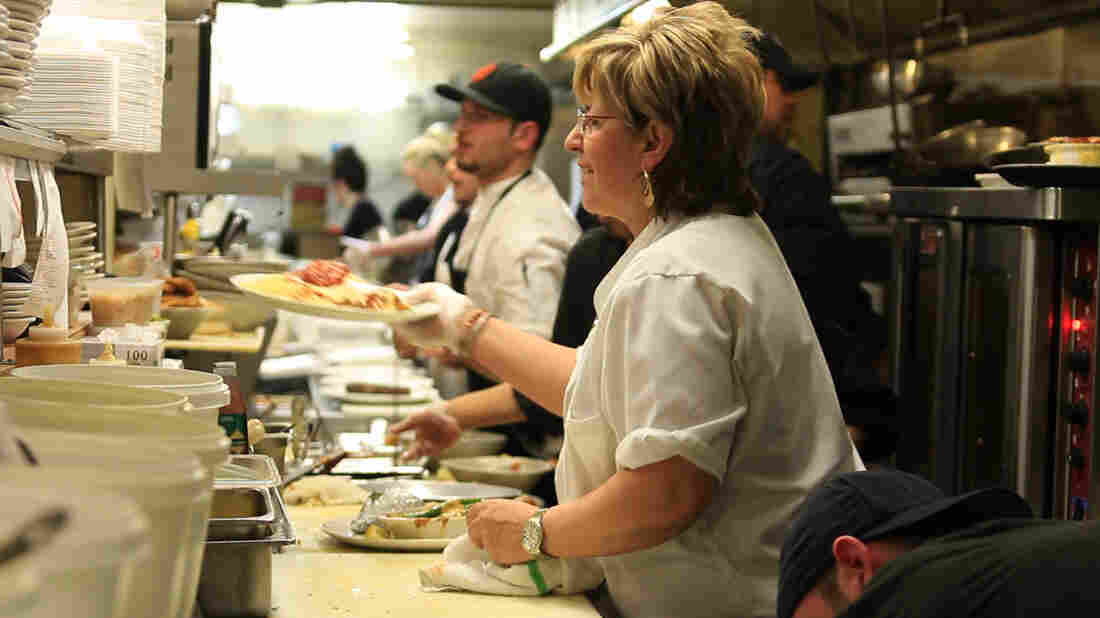 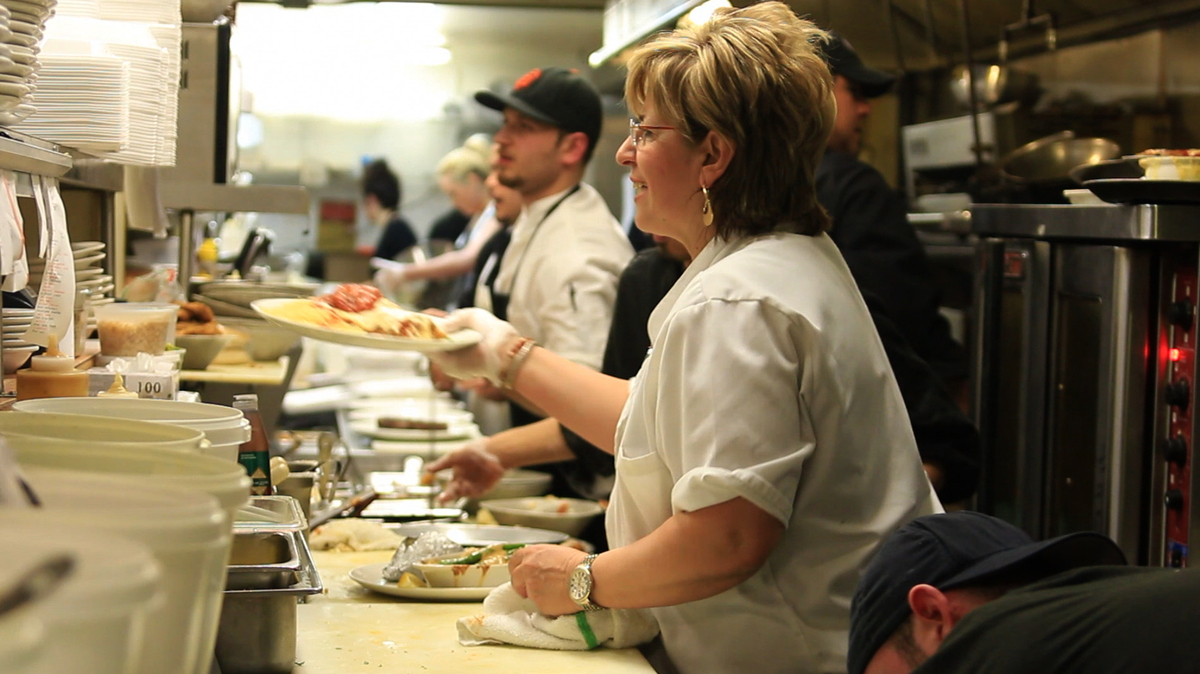 Chef Val James inspired her daughter to create a documentary about the challenges female chefs face, including access to capital, sexual harassment, and family time off.

Less than 7 percent of restaurants in the United States are led by female chefs.

This statistic from a 2014 Bloomberg study came as a huge surprise to Joanna James, a journalist-turned-filmmaker who is also the daughter of a female restaurateur. When she decided to make her first documentary feature film about her mother's journey as a chef, restaurant owner and single mother, she had no idea that her mother's struggles to establish herself in the restaurant industry were commonplace among women.

That film, A Fine Line, began as a love letter to her mom, chronicling the difficulties Val James overcame — from finding bank loans to babysitters — as she established her own restaurant in the early 1990s in central Massachusetts. Eventually the documentary grew into a much bigger story filled with dozens of additional voices from across the industry.

"I suddenly realized that what my mother had faced was part of a larger discussion," says James. "I wanted my mom's story to be the compelling factor that moved everything forward, but to also weave in the stories of other female chefs."

As the scope of the film grew, Joanna James went to Women Chefs & Restaurateurs, a networking association for women in the culinary industry, for financial help in 2016. Chef Ruth Gresser, who owns four restaurants in the Washington, D.C. area and was serving as president of WCR's board of directors at the time, felt it was a project worth supporting.

"One of the things that I'm very aware of," says Gresser, "is how immensely the food and restaurant business has changed during the 40 years that I've been involved in the industry — yet how little has changed for women during the same time. We need to expand the conversation about supporting women into leadership."

The restaurant industry is generally regarded as unfriendly to women, whether it's frequent sexual harassment in the workplace or nonexistent family leave policies. In the 21st century, women still struggle to advance within restaurant kitchens and can find it next to impossible to find funding to open their own restaurants. This is despite the fact that more than half the students at the Culinary Institute of America are now women.

James and her co-producer, Katy Jordan, are both first-time moms. Now traveling the country sharing the documentary at film festivals and seeking distribution for theatrical release, they have become keenly aware of the struggle to balance work and family. In particular, Jordan was struck by an interview in the film with Michelin-starred chef Barbara Lynch in which Lynch describes coming back to her restaurant just two weeks postpartum.

"Barbara talks about breastfeeding and butchering at the same time, and it always gets a laugh from the audience," says Jordan. "But at the same time, there's something vulgar about that. You get a sense from the women in the audience, no matter what industry they work in, that yes, that's the way it is. That's how you keep your job."

Indeed, restaurants are typically known for long work days, often 12 or 14 hours. But the female restaurateurs profiled in the film see no reason why restaurants can't be structured to allow for work-life balance.

"First of all," says Lynch, "wherever you choose to work, you need to be treated with dignity."

For Lynch, that might mean helping some of her 400 employees — male and female — with paying off student loans, or providing boxes of groceries for new moms on her staff.

At Val's Restaurant, Val James has an open door policy at her office, where many of her employees refer to her as a second mom.

"Everybody has their worries," she says. "It's always nice to find that person who will sit down with you and say, 'It's going to be OK. Let's figure something out.' "

But, as Iron Chef Cat Cora points out, sometimes, it's all about getting the job in the first place.

Just 20 years ago, Cora, fresh out of culinary school, wanted to work in a kitchen in France so that she could continue to hone her skills. Instead, she received eight rejection letters, which all stated in no uncertain terms that women simply were not hired to work in the kitchen.

Now the owner of several restaurants, she says, "They said that to the wrong girl. It just made me more determined to show that I could get into a French kitchen and kill it. It was a turning point for me."

For women of color looking for advancement in the food industry, it can be even more difficult to find opportunities. In the film, African-American chef Mashama Bailey points out that the building that houses her restaurant was once a segregated bus station: "When I came into the building, it was really humbling. I know the people who were in this space — going to ride the bus, sitting in that little tiny back waiting room — did not think that someone like me would be a co-owner or be in this space at all running it."

It's one of many moments in A Fine Line that resonated with chef Elle Simone, a food stylist who is also the first African-American cast member on the PBS series America's Test Kitchen and founder of SheChef, a networking group for women of color in the food industry.

"There's a lack of representation in the top spots," says Simone, "of women in general and women of color in particular. I saw that early on when I was an intern at the Food Network, especially as someone who wasn't coming from one of the big culinary schools, but from a school where all my classmates were black and brown people. I was lucky, but most people at the smaller schools don't even have the opportunity to get those internships, and even when you do, you don't usually see someone in charge who looks like you."

Many female chefs believe that offering mentorships and apprenticeships, as well as having women and women of color in leadership positions, is critical to establishing equal opportunities within the workplace and policies that provide more work-life balance. And organizations like the James Beard Foundation and Les Dames d'Escoffier have established programs aimed specifically at helping women advance within the culinary industry.

James and Jordan have also begun connecting with local women legislators and entrepreneurs in the cities where the film has been showing to push for paid maternal leave, early childhood education programs, and equal pay for equal work — issues that they see as critical to helping female chefs gain traction.

"I think what we need to create," says James, "is an 'old girls' club,' with female accountants, tax attorneys, and so forth, who can help women in the culinary field achieve their goals. Good food is important, but it's about so much more than food."

A Fine Line will be screened in a number of film festivals around the country this fall.