Accessibility links
After The Wildfires: Artist Captures Plight Of Napa's Undocumented Workers : The Salt Napa Valley's wine industry relies heavily on immigrants, but the undocumented are often ineligible for services when disaster strikes. An artist depicts how the 2017 fires impacted this community. 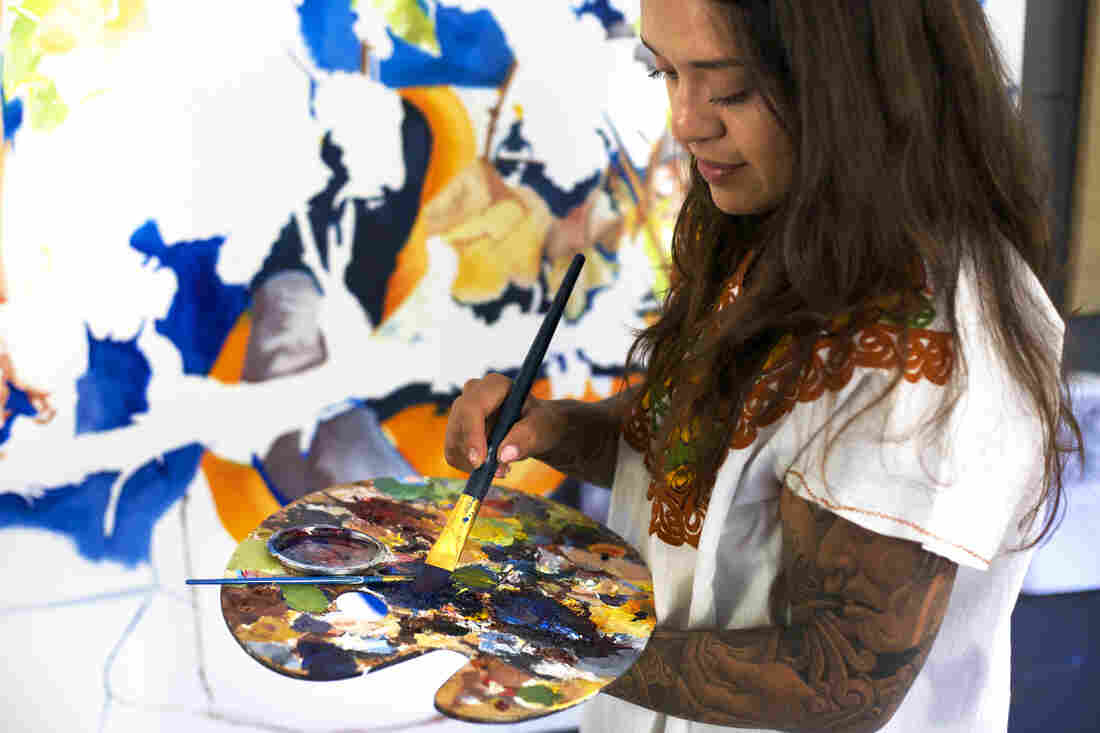 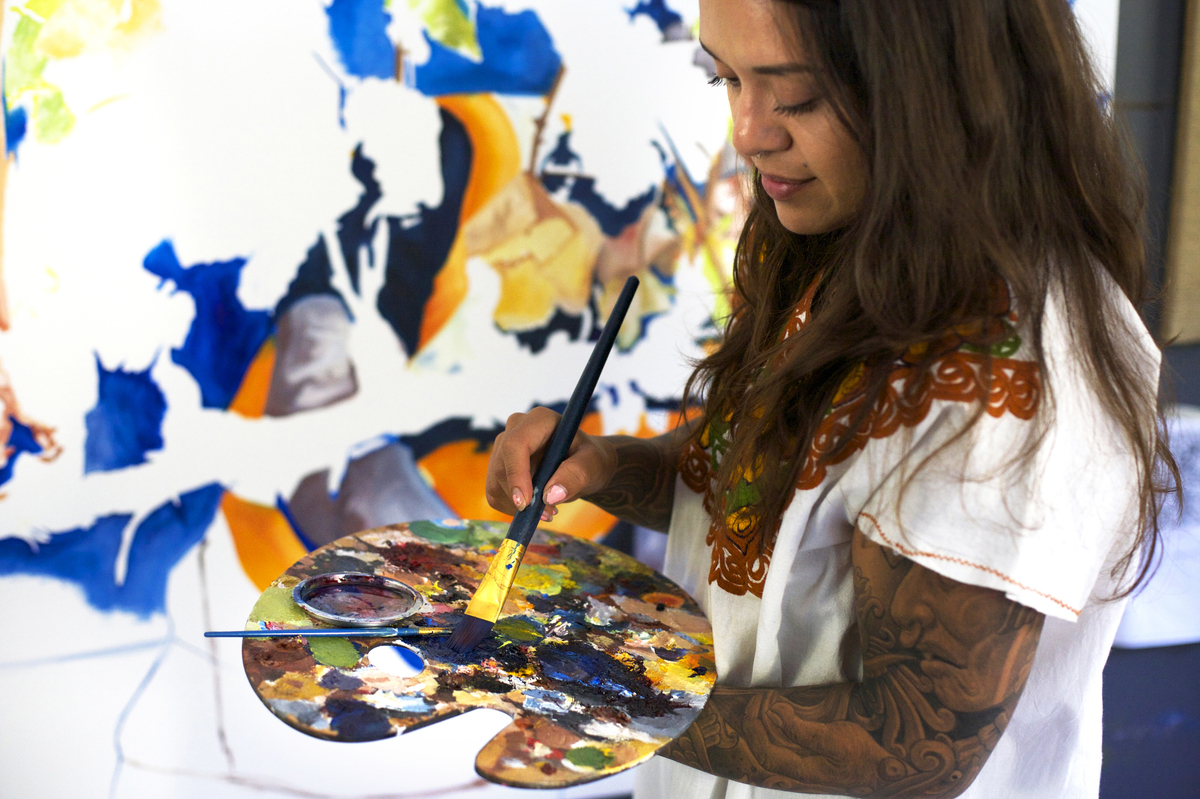 Arleene Correa Valencia works on a painting in her latest series: In Times of Crisis, En Tiempo de Crisis.

When wildfires ripped through California's Napa Valley in October 2017, local artist Arleene Correa Valencia was shocked to hear that farm workers were continuing to work in the vineyards — even as smoke surrounded the area, and the locals were evacuating.

Outraged, Correa turned to her art — painting — to highlight the dangerous conditions in which immigrant workers, particularly undocumented ones, are forced to labor. She took photos of the scene to create oil paintings, which are the focus of her upcoming series, En Tiempo de Crisis, In Times of Crisis.

Standing on the edge of a manicured vineyard on Silverado Road, the main road of Napa Valley's world-renowned wineries, Correa recalls what she saw as the fires raged.

"The moon was out, it was red orange, highlighted by the fires, it was something out of a movie, it was beautiful," says Correa. "But underneath all that, there were people, and they were not safe. They were hustling up and down these long stretches of vineyard, just running to save the grape."

Correa was born in Michoacán, Mexico, and raised in Napa Valley. Now 24, she is a recipient of Deferred Action for Childhood Arrivals, or DACA — the program that allows undocumented immigrants brought here as children to live and work in the U.S legally. Growing up, she experienced firsthand the contradictions of living in a wealthy area as an undocumented immigrant.

"My parents, two siblings and I shared a two-bedroom apartment with 16 people," says Correa. "We lived in this tiny little place and everybody there were my uncles, my aunts, my cousins. Everybody was just working so that we could all pay rent collectively."

Many of her family members worked in the vineyards. Immigrants play a crucial role in the Napa economy, making up a majority of the 55,000 people employed by its wine industry. 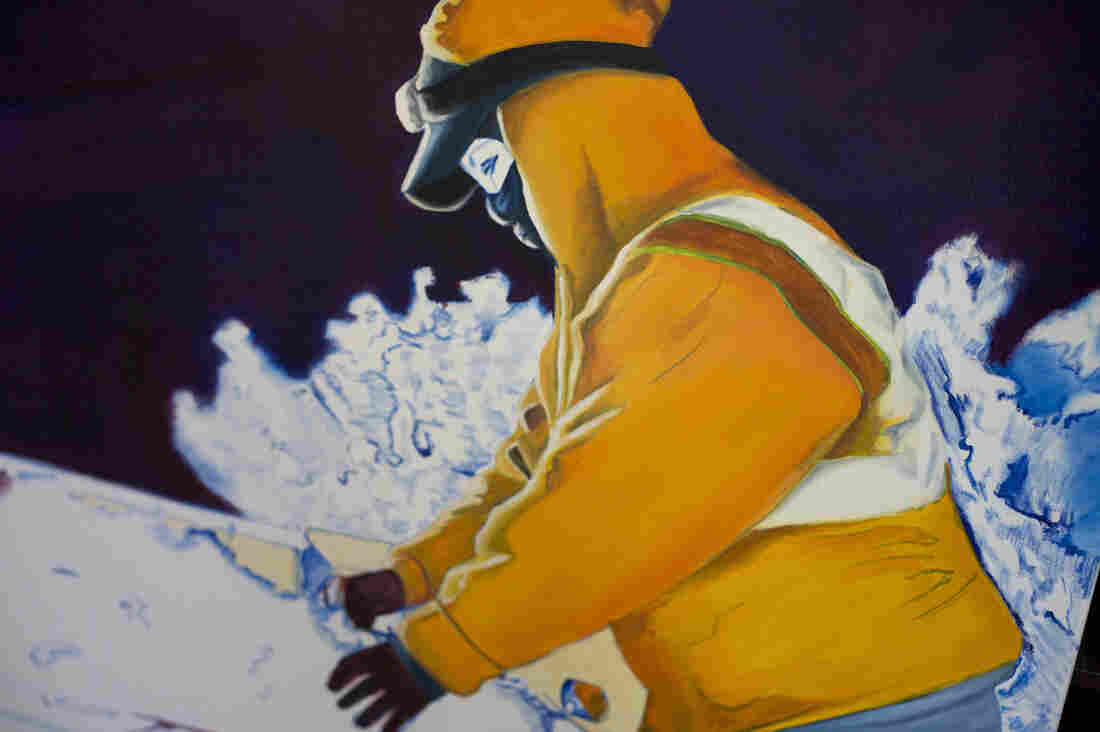 In one of Correa's oil paintings, a woman harvesting grapes at night ties a bandana around her mouth and nose to protect herself from the smoke permeating the fields. Rachael Bongiorno for NPR hide caption 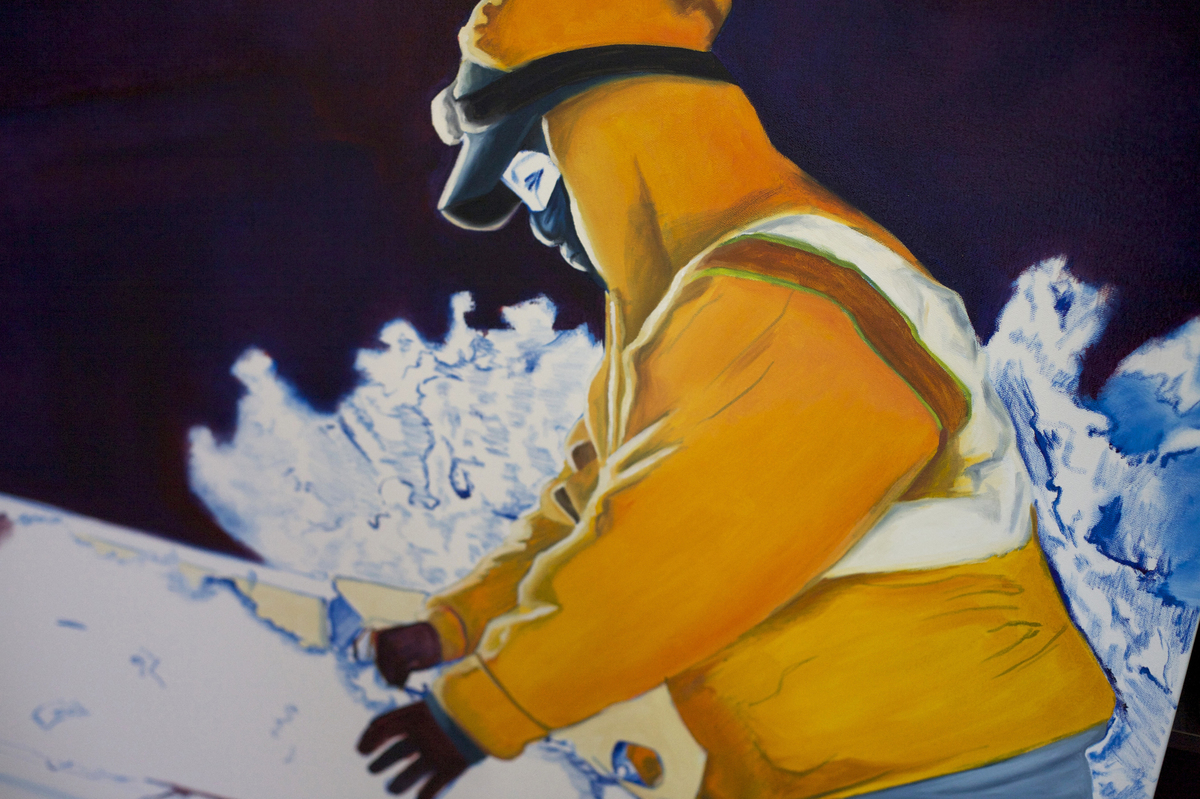 In one of Correa's oil paintings, a woman harvesting grapes at night ties a bandana around her mouth and nose to protect herself from the smoke permeating the fields.

But when a natural disaster strikes, undocumented immigrants are ineligible for most disaster aid or unemployment benefits. Even if an undocumented parent has U.S-born children who are eligible for federal emergency relief funds, the personal information required by these agencies can discourage them from applying. During the 2017 fires, rumors circulated that Immigration and Customs Enforcement (ICE) was going to local evacuation centers. Those rumours were unfounded, but they deterred undocumented immigrants all the same.

During last year's fires, Correa recalls seeing "a flock of people sleeping in the Walmart parking lot in their cars, because they were too afraid to go down to the community college and get a couple of blankets and a cot for their children. ... The fear of being deported is keeping them from being helped."

Correa documented what she saw, and the photographs she took inspired her latest oil paintings. In one painting, a woman is bent over a large bin of freshly cut grapes. It's dark, so she's wearing a neon orange safety vest, a headlamp to see her work and a bandana tied around her mouth and nose to protect herself from the smoke permeating the fields.

Correa, who has asthma, says when she shot the photo the painting is based on, in a local vineyard, she was wearing a particulate respirator mask, yet she still struggled to breathe. But she says the workers she saw were not wearing masks, and only some — like the woman in the painting — wore a bandana over their faces.

"Everyone was coughing, especially because they were running up and down, but no one was complaining," says Correa.

Winemakers were under pressure to save the grapes from the fires, as well as from smoke damage. The wine country fires of 2017 proved to be among the costliest in California's history, generating nearly $10 billion in insurance claims. Farmworkers felt the pressure, too, Correa says.

"This is when they were making the most money," says Correa, so farmworkers "don't have the luxury to say, 'I'm leaving town because it's unsafe' or because 'I don't want to breathe the air.' "

When Correa asked the woman she photographed how much money she was making, she said she didn't know. The woman told her that laborers make around $2,000 per ton of grapes, but this is divided among a complex arrangement of subcontractors, as well as the 20 or so grape pickers for that shift. 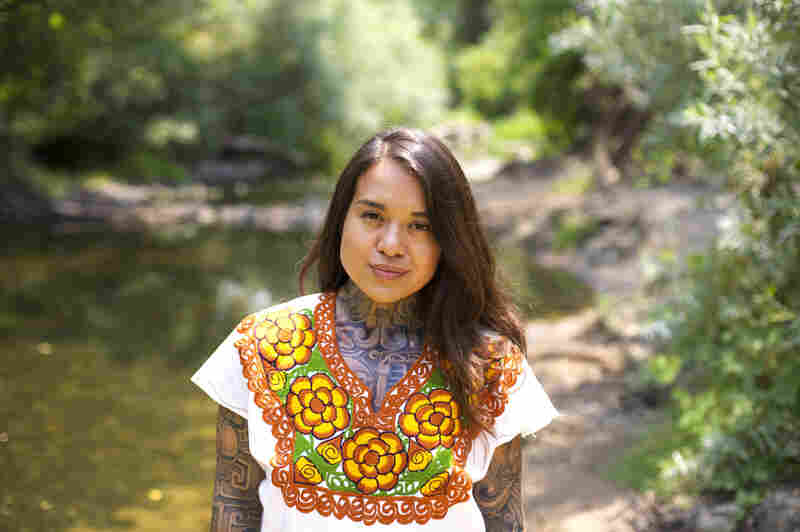 Arleene Correa Valencia stands by the creek on the Silverado Trail in Napa Valley. Rachael Bongiorno for NPR hide caption 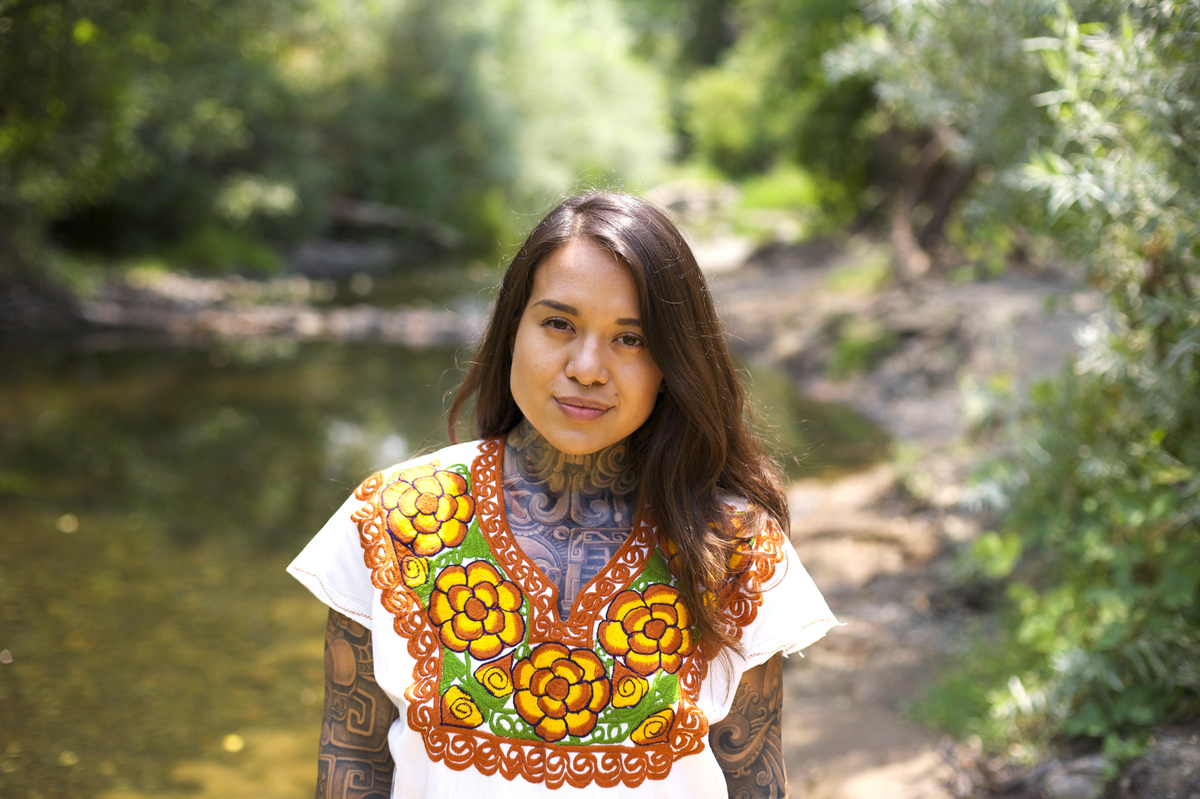 Arleene Correa Valencia stands by the creek on the Silverado Trail in Napa Valley.

It's been 10 months since the Napa fires, and organizations that serve the local immigrant communities say that undocumented immigrants are still fearful of accessing services, despite the significant challenges which they experience — including family trauma, unemployment and a lack of housing.

"Landlords have said they need to renovate the apartments after the fires, and then they jack up the rent," says Josefina Hurtado, executive director of Puertas Abiertas Community Resource Center, an organization which offers counseling, disaster relief, English classes and other social services. "We have families moving from entire apartments to just one room."

When fires burned earlier this summer across central and northern California, ICE issued a statement saying it would suspend routine immigration enforcement operations in the affected areas. But advocacy groups say the overall climate of fear around ICE gives immigrants little reassurance.

Correa says even though she is a recipient of DACA, the fear and anxiety of being undocumented hasn't gone away. But she sees it as her responsibility to use her art to humanize the experience of undocumented immigrants and immigrant workers in general.

"My work is made to talk about not only my experience, but the collective experience of the Latino immigrant in the Napa Valley," says Correa. She is hoping to exhibit the series in a Napa museum in the spring.

As someone who appreciates a good glass of Napa Valley wine, she also hopes her art will change the way people think about what goes into making it.

Rachael Bongiorno is a freelance multimedia journalist based in New York City. She often reports on the intersection of immigration, culture, politics and food.