Accessibility links
After Hurricane Maria, Chef José Andrés Had A 'Crazy Dream' To Feed Puerto Rico : The Salt The James Beard award-winning chef started out preparing food for doctors and nurses. Then calls started pouring in from across the island. The message was clear, he says: "The island is hungry." 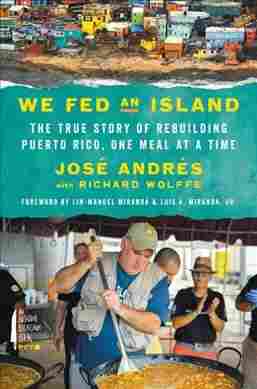 We Fed an Island

The True Story of Rebuilding Puerto Rico, One Meal at a Time

by Jose Andres and Richard Wolffe

Title
We Fed an Island
Subtitle
The True Story of Rebuilding Puerto Rico, One Meal at a Time
Author
Jose Andres and Richard Wolffe

"We began serving hospitals, because the doctors and the nurses — nobody was feeding them," Andrés says of the initial effort.

But then calls started pouring in from places that were hours away from San Juan. Andrés says the message was clear: "The island is hungry. With one restaurant alone, we have not enough."

So Andrés and his group expanded their operation, commandeering kitchens from restaurants, schools and even a basketball stadium. "At one point, we had 18 kitchens functioning at the same time," he says. "We would [serve] over 150,000 meals a day."

On why chefs are particularly adept at helping with disaster relief

Restaurants are chaos and chefs — restaurant people — we manage chaos very well. After a hurricane, you see a lot of chaos, and people go hungry and people go thirsty. But what we are very good at is understanding the problem and adapting. And so a problem becomes an opportunity. That's why I think ... more and more you're going to be seeing more [chefs] in these situations. We're practical. We're efficient. And we can do it quicker faster and better than anybody.

Everybody thinks an arena is where an NBA team plays. No, no, it's a lie. An arena is a gigantic restaurant that happens [to have] NBA players for entertainment. So every arena potentially is a restaurant. It takes only a few hours to activate ... the arena in case of an emergency. ...

I got in an arena [in Puerto Rico] to use as a kitchen, to use as a place to gather all the food that was being donated, all the food we were buying. And there we created a crazy dream. For a few weeks, I think it became one of the biggest restaurants in the world.

Trump Says Administration's Response To Hurricane In Puerto Rico A '10'

President Trump [said] 16 bodies. And by the time he said that, myself, without even looking, I saw four [corpses]. ... Here, in [a] few days ... I saw 25 percent of the official death toll that President Trump [cited]. Obviously this didn't happen that way.

And by somehow keeping the real number away from the public, what this did was almost not [recognize] that the problem in Puerto Rico was huge, that the hurricane was amazingly big. ... If we knew there [were] 2,000, 3,000, 4,000 deaths, I'm sure the weight of the federal government to support the fellow citizens of Puerto Rico would be quicker, faster, and they would devote more infrastructure, money and bodies to try to help Puerto Rico to be back.

Sam Briger and Seth Kelley produced and edited this interview for broadcast. Bridget Bentz and Maria Godoy adapted it for the Web.

Chef José Andrés To Close Restaurants For The 'Day Without Immigrants'