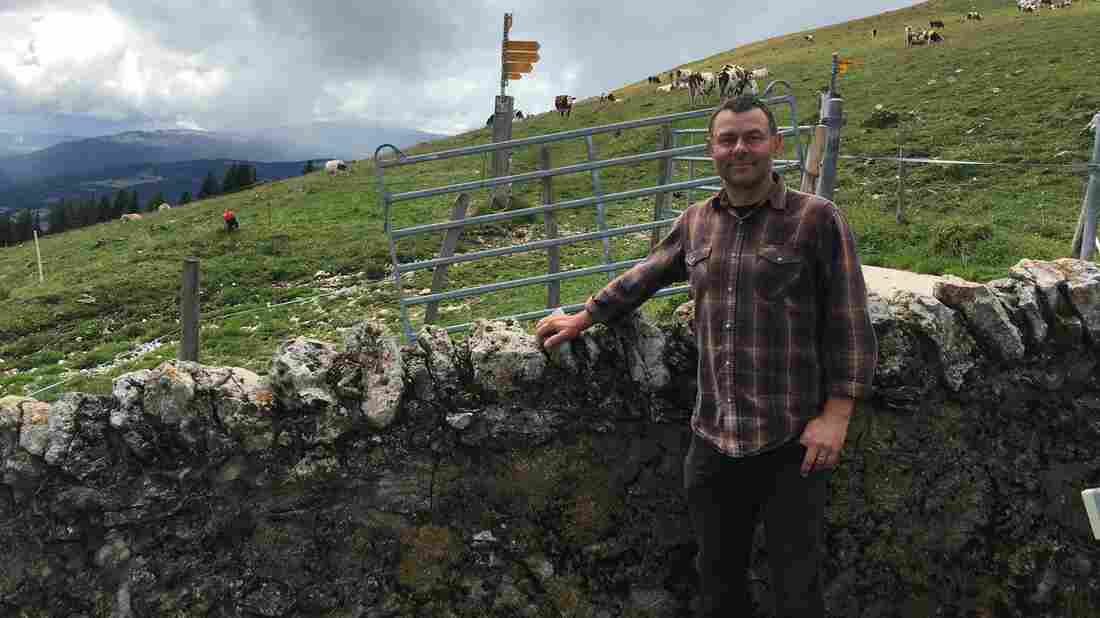 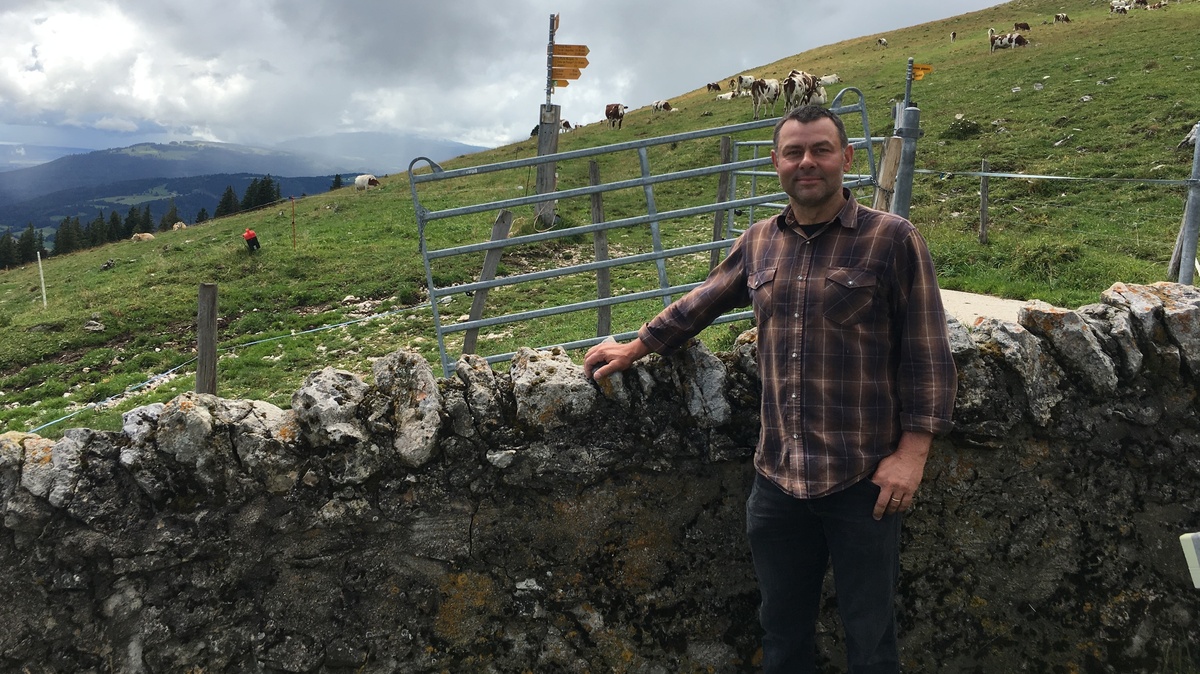 Dairy farmer Dominique Rochat says the Swiss government's water deliveries have allowed him to keep his cows in the high mountains.

There's a distinct sound to summertime in Switzerland. I first heard it driving up a winding mountain road at night. A curious tinkling sound was coming from the darkness around me. It got louder and closer, until I realized it was the clanging of cow bells in the surrounding pastures.

For centuries, between late May and early October, dairy farmers have been bringing their cows up to graze in the high mountain pastures. But this summer, because of a severe drought in July and August, cows grazing in mountain pastures haven't had enough to drink. So water has been delivered to them.

Dairy farmer Dominique Rochat, who has 110 cows, says the grass is succulent up here at 4,500 feet. Rochat spends the summer with his cows, staying in his 17th-century chalet. He says the tradition of grazing cows in the high pastures in summer also gives farmers a chance to harvest enough hay in the plains below for their cows in winter. But this summer could have been a disaster, says Rochat.

"A milk cow can drink 40 to 50 gallons a day, so my herd consumes up to 1,300 gallons a day up here when it's hot," he says. "But our government reacted just in time with these water deliveries, because it's allowing us to keep our cows in the high mountains through the end of the season."

Rochat says that's doubly important during this drought, because there is no hay to spare from a sparser than usual harvest down below.

Rochat's chalet is about an hour's drive north of Lausanne, up a narrow, twisting mountain road much too perilous for a water truck. So he gets water deliveries by helicopter. This morning's delivery, which I've come specifically to witness, is canceled at the last minute due to fog. But Rochat shows me a video he took of last week's delivery on his cellphone. He says the Swiss army helicopter scooped 2,000 gallons from Lake Neuchatel in a giant red bag, then flew it up the mountainside.

"Look, it's spectacular," he says, pointing to the screen. "The way the pilot lowers the copter down and the vigilance of the people on the ground who control the water bag so we can fill up my cistern. It's not something you see every day around here!"

But water deliveries by helicopter and truck took place almost every day in Switzerland this August. Traditionally, farmers collect rainwater and snow-melt in cisterns for use in summer months. You see the centuries-old round stone cisterns near every chalet. But that system was no match for the scorching heat wave this year.

According to the Swiss weather service, July and August 2018 are the driest on record since 1921, while recent temperatures haven't been so consistently hot since the 1880s.

"In the 20th century, heat waves of this intensity would occur once in 10 or 15 years," says Martin Beniston, a climatologist who recently retired from the University of Geneva. "And now we've had like four or five since the big 2003 heat wave. Things are changing rapidly, as if we are having a northward shift of the Mediterranean climate to north of the Alps." 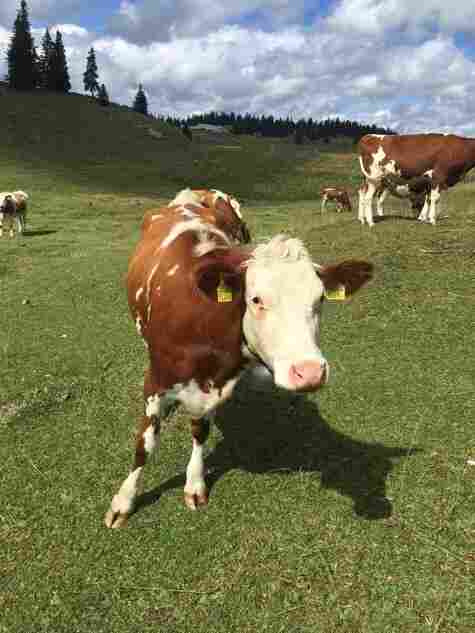 This summer, because of a severe drought in July and August, cows grazing in Swiss mountain pastures haven't had enough to drink. Eleanor Beardsley/NPR hide caption 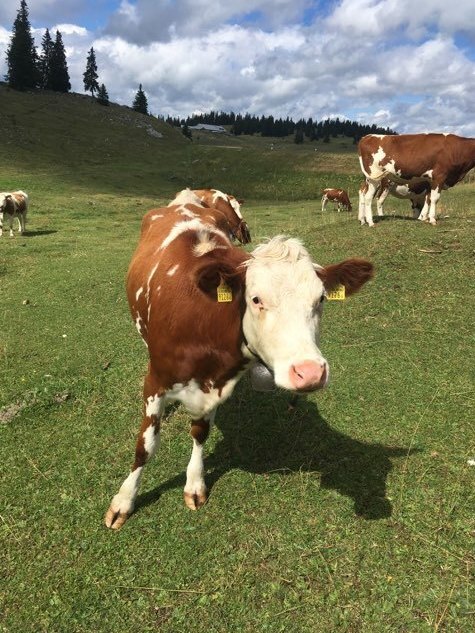 This summer, because of a severe drought in July and August, cows grazing in Swiss mountain pastures haven't had enough to drink.

Jean Claude Pittet is a second-generation dairy farmer. He hopes to pass his dairy business on to his son. But with the increasingly frequent droughts, he says he doesn't know what's going to happen.

"I don't know if my son will be able to do this his whole life like my father and I have," says Pittet.

Pittet and his wife, Mireille, are driving their tractor up to even higher pastures where one of their cows has given birth. The couple say luckily they have been able to get water delivered by truck this summer. Mireille points to where the rainwater is collected in gutters along the slanted roofs of the chalet and funneled to the cistern. She says usually it's enough. But not this year.

"We would have really had problems without those water deliveries," she says.

Around the back of their chalet, the couple's cows are milked twice a day inside a small barn. They sell double-cream butter and the famous Gruyère, or Swiss cheese, in a front room.

Eric Treboux, a forest ranger in the Swiss canton [or state] of Vaud, says repercussions of the water shortage go beyond cows.

"Switzerland is known as the water tower of Europe, because we have the Alps with all of the glaciers," says Treboux. "Snow melt and runoff from the glaciers feed rivers like the Rhone, the Rhine, the Po and the Danube. Europe's major rivers all have their source here in Switzerland."

Treboux says less snow and receding glaciers will continue to affect agriculture. But the phenomenon will also influence other activities dependent on those rivers, like tourism and hydroelectric power.

Climatologist Beniston says melting glaciers are probably the most obvious evidence of rapid climate warming. "We know that the Swiss Alpine glaciers have lost one-third of their volume since the beginning of the 20th century," he says. Beniston says as temperatures heat up, as much as 90 percent of the glaciers could disappear by the end of this century.

"If the glaciers would disappear entirely, it would have major implications for seasonality and the quantity of water flowing from the Alps and supplying low-lying areas in France, Germany, Holland and central and northern Italy," he says.

Back at Rochat's mountain chalet, Jacques Henchoz, director of agriculture for Vaud, says the Swiss are a nation of herders. "Our agriculture economy is based primarily on grazing and milk and cheese production," he says. "But with the weather getting hotter and drier over the last 20 years, things are changing."

Henchoz says providing water in the high pastures for dairy cows is going to be the biggest challenge facing Swiss farmers this century.