Accessibility links
VIDEO: Dandelions Aren't Just Weeds. You Can Fry Them, Too : The Salt Expert forager and nutritionist Debbie Naha shows us how to turn those bright yellow flowers into nutritious, and delicious, snacks.

Some may think of dandelions as just unwanted weeds, but expert forager and nutritionist Debbie Naha says "a weed is just a plant growing where you don't want it to."

Naha loves to collect and eat dandelions when they bloom in the spring and again in early fall, when the days begin to shorten.

Some may also think of dandelions as those white puffballs whose seeds you can blow away like a candle on a birthday cake. The puffball is also considered a dandelion — it's what the yellow flower matures into after a few days. But these aren't especially good to eat.

VIDEO: Harvesting A Wild Lunch With A Master Forager

Naha prefers to forage for the bright yellow dandelions and says the whole plant is edible: flower, stem, root and leaves. Naha likes to gather and add the flowers to some of her recipes, since they're rich in vitamins and antioxidants. "Dandelion flowers are full of antioxidants and really good for you," she says.

Naha took us foraging for dandelions at Little Buffalo State Park in Newport, Pa. She advises to pick from your own yard or a place where you know that no agricultural chemicals, like weedkillers, are sprayed. She demonstrated how she incorporates the flower petals into a dandelion smoothie and dandelion fritters. Watch the video above to see how she makes her recipes. 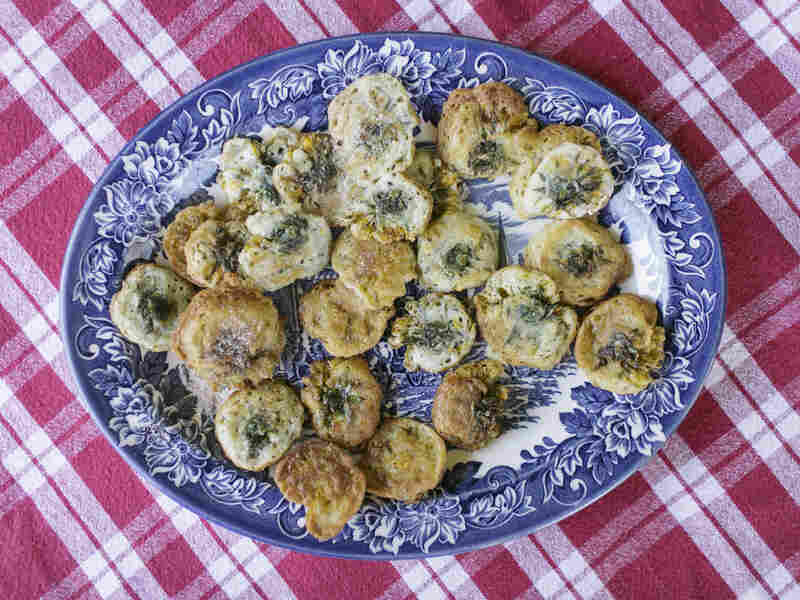 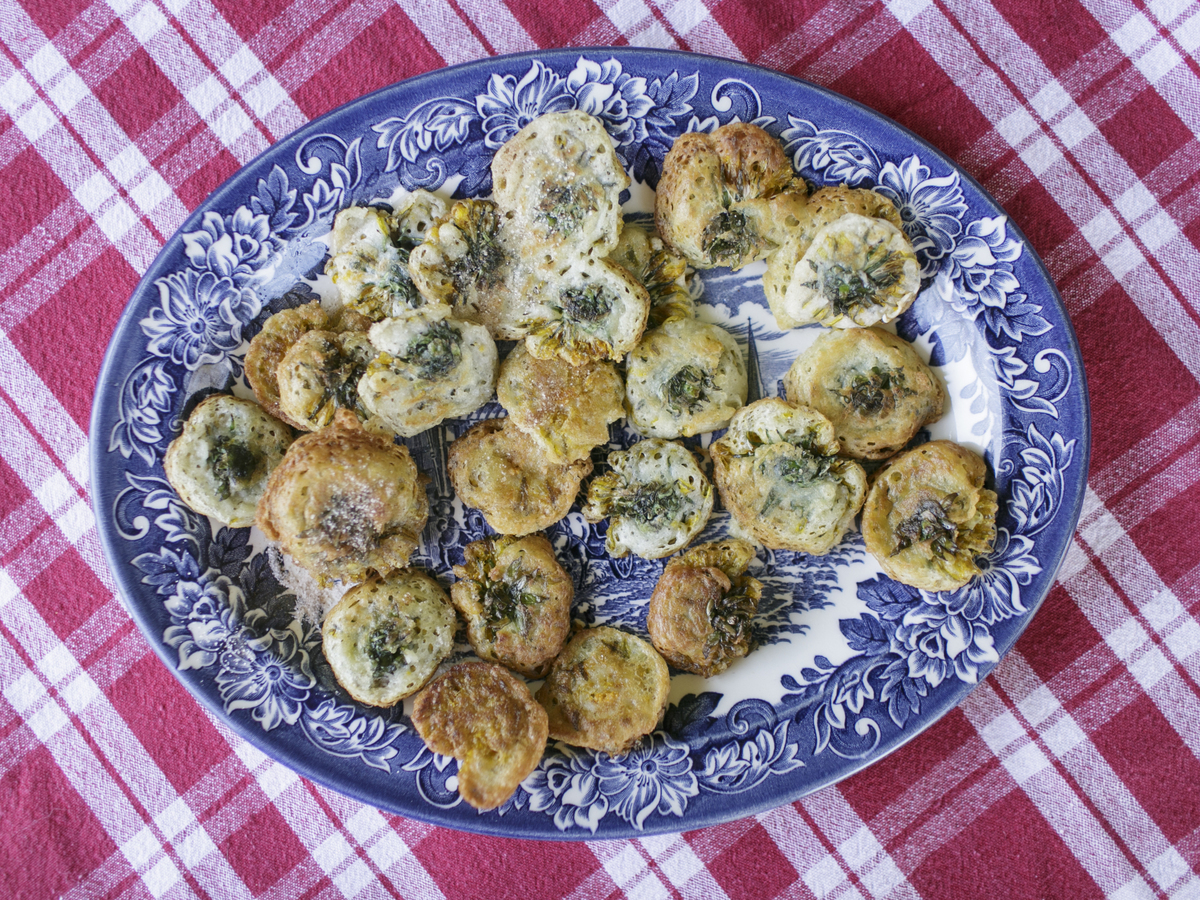 *Either cook the flowers individually, or place them in small groups with flowers just touching at the edges. Done this way, you can flip a bunch at once like a pancake and then pull them apart as you eat them!

In a medium mixing bowl, whisk together the flour, baking powder, sugar and salt.

Add the milk and whisk until smooth.

Pour the oil into a medium frying pan. Heat over medium heat until hot.

Hold each dandelion by the base and dip into the batter, coating completely.*

Place each flower into the hot oil. Cook until golden, then flip and cook the other side. (It won't take more than a minute or two.)

Remove the hot fritters and place on paper towels to soak up excess oil.

Cook in batches until done.

Sprinkle with cinnamon-sugar or devour them plain. Yum either way! 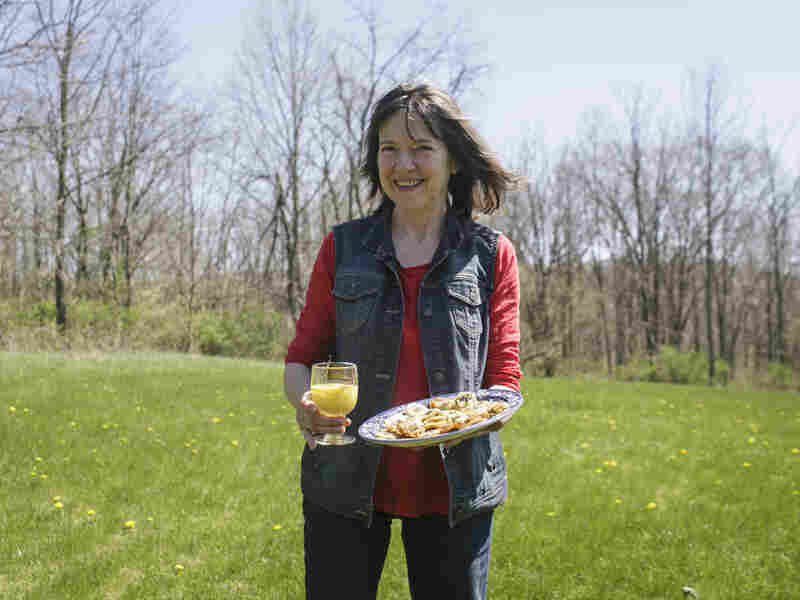 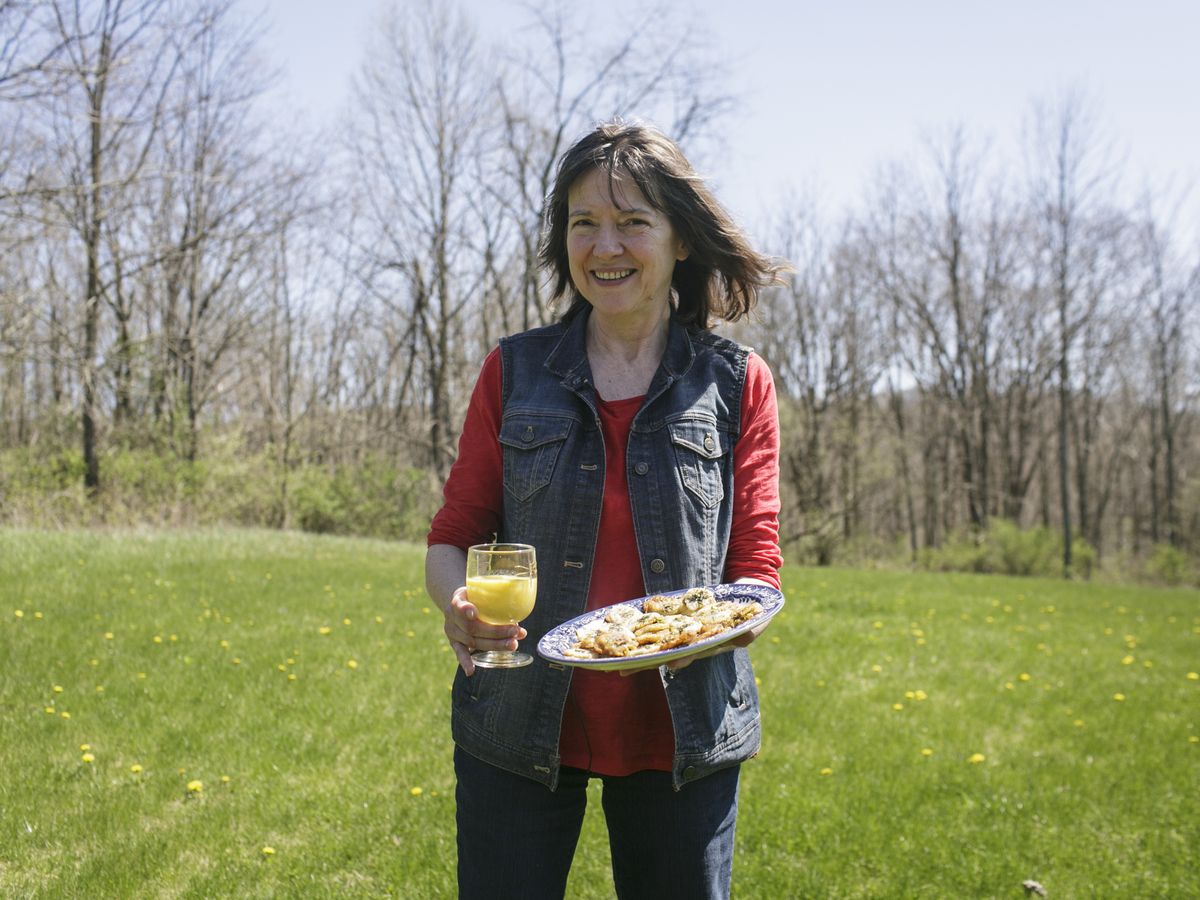 Debbie Naha made dandelion fritters and a dandelion smoothie with wild dandelion flowers.

Place all ingredients in a blender. Blend on high for 30 seconds or until completely smooth.

Pour into glasses and serve.

*Including the green parts of the flower is perfectly fine, except it will change your smoothie from a sunshiny-yellow to a murky color. You may also detect the slight bitter flavor of the greens.

Note: If you prefer, you can thin out the smoothie by adding a splash of milk, or more juice.