Accessibility links
Oregon Launches First Statewide Refillable Bottle System In U.S. : The Salt The new beer bottles can be refilled up to 40 times and are designed to be easily separated from the rest of the glass in the deposit system, ensuring that they get refilled instead of recycled. 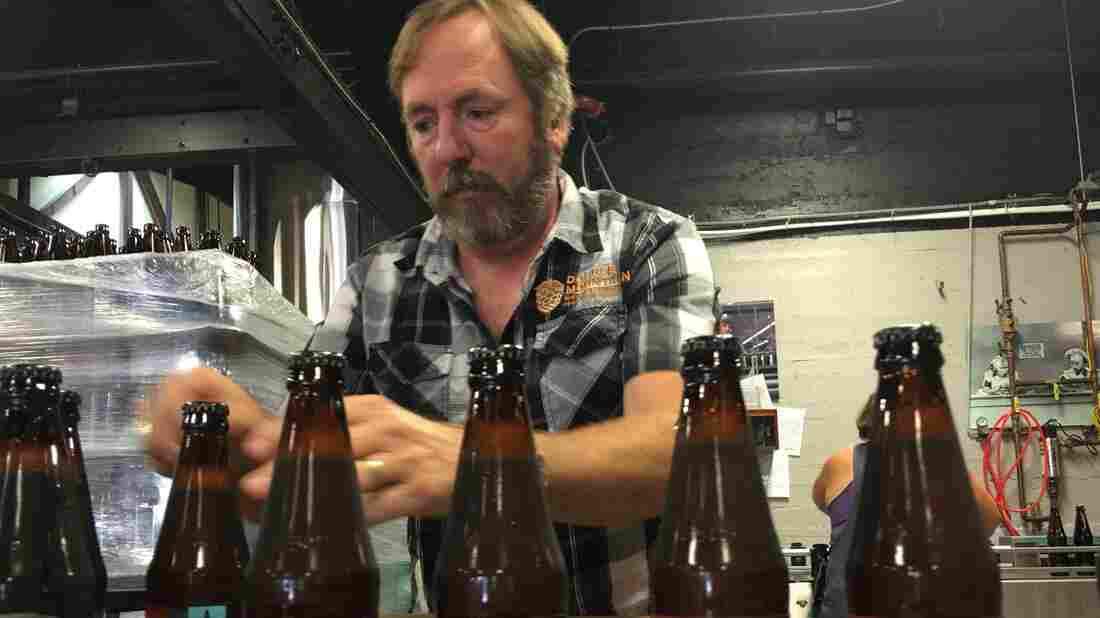 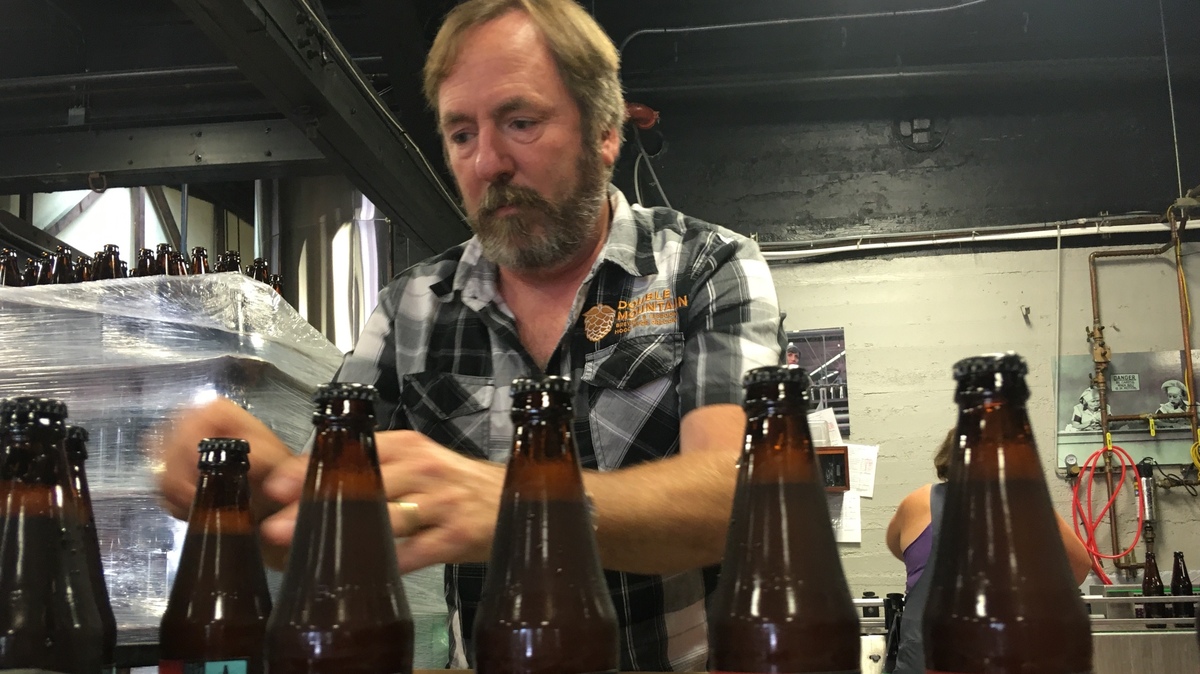 Double Mountain Brewery founder Matt Swihart grabs freshly bottled pale ale from the bottling line in Hood River. The ale is among the first to be sold in Oregon's new refillable beer bottles.

Thousands of thicker, heavier beer bottles are popping up on store shelves across Oregon as part of the first statewide refillable bottle system in the country, and supporters are hoping it might catch on in other states, too.

It's a triumphant moment for brewery founder Matt Swihart. After six years of being the only brewery in Oregon running a refillable bottle system, Double Mountain finally has company.

"I felt like Don Quixote a little bit, just kind of racing uphill at windmills," Swihart said. "I was called literally crazy and insane for even attempting it, and fellow brewers were speculating that it wouldn't work."

The system he was using was kind of working. He bought refillable bottles from Canada and asked customers to return them. But he was only getting 15 to 20 percent of those bottles back to be cleaned and refilled.

Despite the low return rate, he stuck with it because he knew any bottles that came back would cut carbon emissions. They wouldn't need to be crushed in the recycling system and reheated into new bottles.

"Anything we get back and clean saves us money down the road, and of course is a more responsible environmental package," Swihart said. "Frankly it's just the right thing to do."

Swihart said what he really needed was a better system of returning the bottles to his brewery.

Now, he has one. It came along with a new bottle developed by the Oregon Beverage Recycling Cooperative, the group that runs the state's bottle deposit system with support from major beverage distributors.

The cooperative already has a statewide infrastructure for collecting bottles.

"We're in a really unique position to make this work," said the cooperative's spokesperson, Joel Schoening. "We're introducing a bottle we can sell to any brewery that's interested in using that bottle."

The new bottles — which can be refilled up to 40 times — are made mostly from recycled glass at the Owens-Illinois glass manufacturing plant in Northeast Portland. The bottles were designed to be easily separated from the rest of the glass in the existing bottle deposit system, Schoening said. That will ensure those bottles get refilled instead of recycled.

For consumers, he said, basically nothing has to change as long as they collect their bottle deposits.

"I like to say all the consumer has to do is choose to buy it," he said. "When they go through a machine, they'll have a unique barcode that will identify them as different from another glass bottle."

Lisa Morrison, co-owner of the Portland bottle shop Belmont Station and a well-known beer writer and connoisseur, said she remembers her parents returning bottles for reuse — not recycling — when she was a kid in Oklahoma.

"If you look back, that was something that used to happen all the time," she said.

Belmont Station was one of the places Double Mountain customers could always return their refillable beer bottles. But now, Morrison said, she can leave that job to the Oregon Beverage Recycling Cooperative.

"I think having OBRC in on this is huge," she said. "That's what's really going to keep it going."

At the bottle shop last week, Double Mountain offered free samples of the pale ale and IPA it is now selling in refillable 12-ounce bottles.

Two six-packs from Double Mountain just joined a 500-milliliter bottle of IPA from Astoria-based Buoy Beer as the first of the new refillable bottle options on the shelves.

Morrison says having beer filling the first batch of refillable bottles is a smart way to sell the concept.

"It's kind of like our state drink," she said. "I would like to see Oregon be the trendsetter in this across the country — much like we were with our first bottle deposit."

As it stands, breweries are only allowed to distribute 20 percent of the beer they put in refillable bottles to out-of-state locations. Otherwise, too many bottles would go out and never come back.

Initially, the refillable bottles are being used by seven breweries — including Double Mountain, Widmer Brothers, Buoy Beer, Gigantic, Good Life, Rock Bottom and Wild Ride — for some of their beers. But Schoening said he expects the numbers to grow. He's already talking with interested cider makers and wineries about using refillable bottles that might come in different colors. 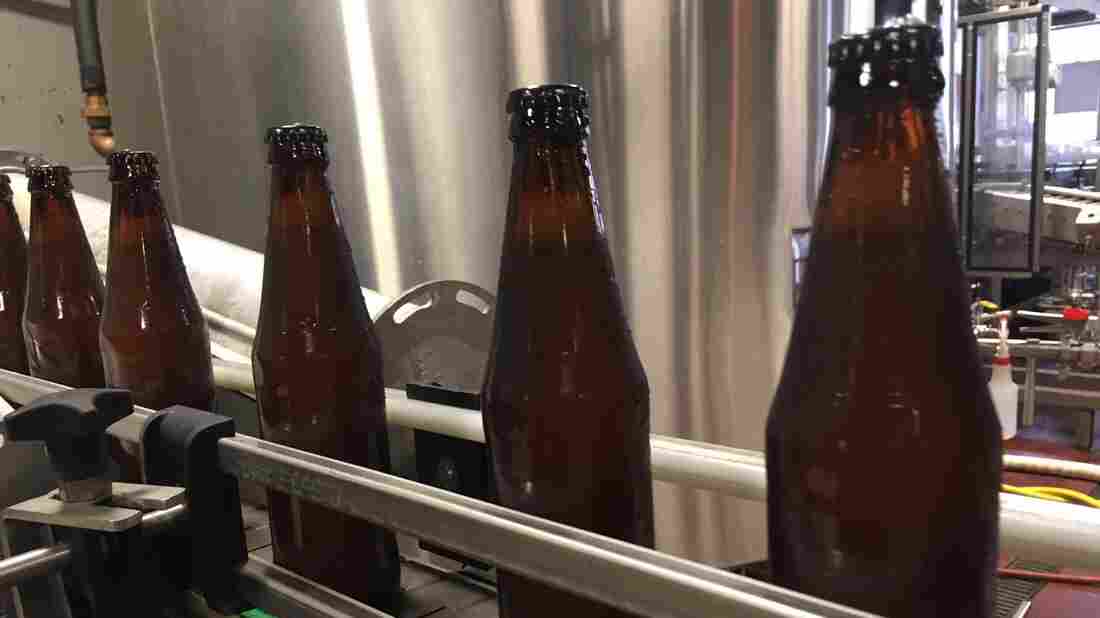 Oregon's new refillable bottles can be used and reused by any brewery in the state. Cassandra Profita/OPB/EarthFix hide caption 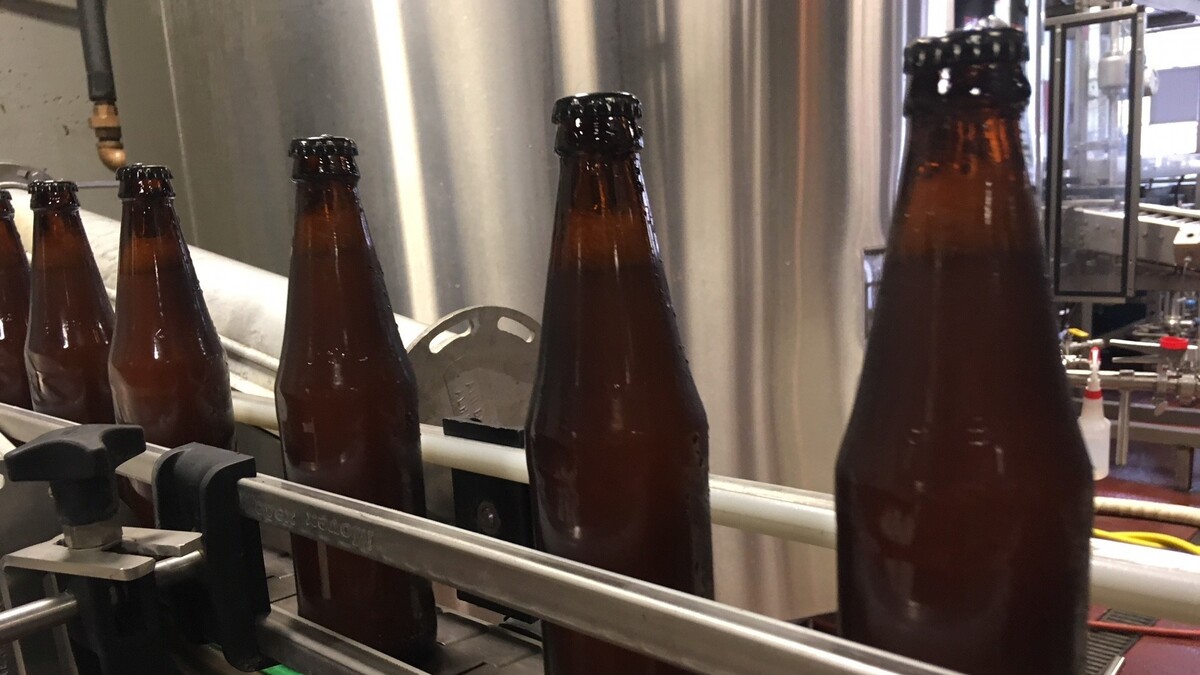 Oregon's new refillable bottles can be used and reused by any brewery in the state.

The cooperative also plans on offering a loyalty program, giving customers a 20 percent return on their bottle deposits — 12 cents back instead of 10 cents — if they bring back a box of 12 refillable bottles.

Right now, the state sees about an 80 percent redemption rate for the containers in its bottle deposit system. If that rate carries over into refillable bottles, Schoening said, the new system will chalk up a lot of carbon savings.

OBRC is talking with the Oregon Department of Environmental Quality about quantifying exactly how much carbon the new program is saving, and they're working on bringing a bottle-washing facility to Portland. Until that facility is built — likely by 2020 — all the refillable bottles will be sent to a facility in Montana to be washed.

But even with that drive, Schoening said, the carbon savings of refillable bottles are big.

"Every time that bottle gets reused, you're cutting the carbon footprint of that bottle in half," Schoening said. "It's the most sustainable choice in the beer aisle."

This story comes to us from EarthFix, an environmental journalism collaboration led by Oregon Public Broadcasting in partnership with five other public media stations in Oregon, Washington and Idaho. Listen to the audio here.