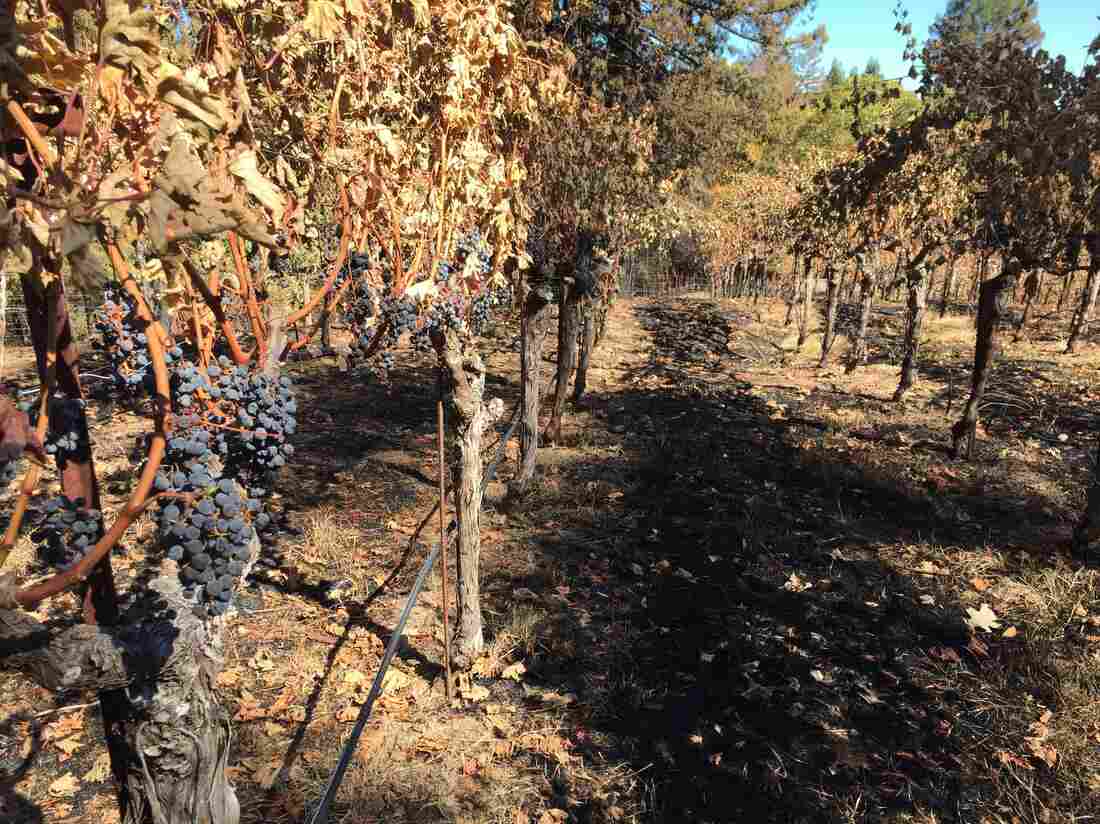 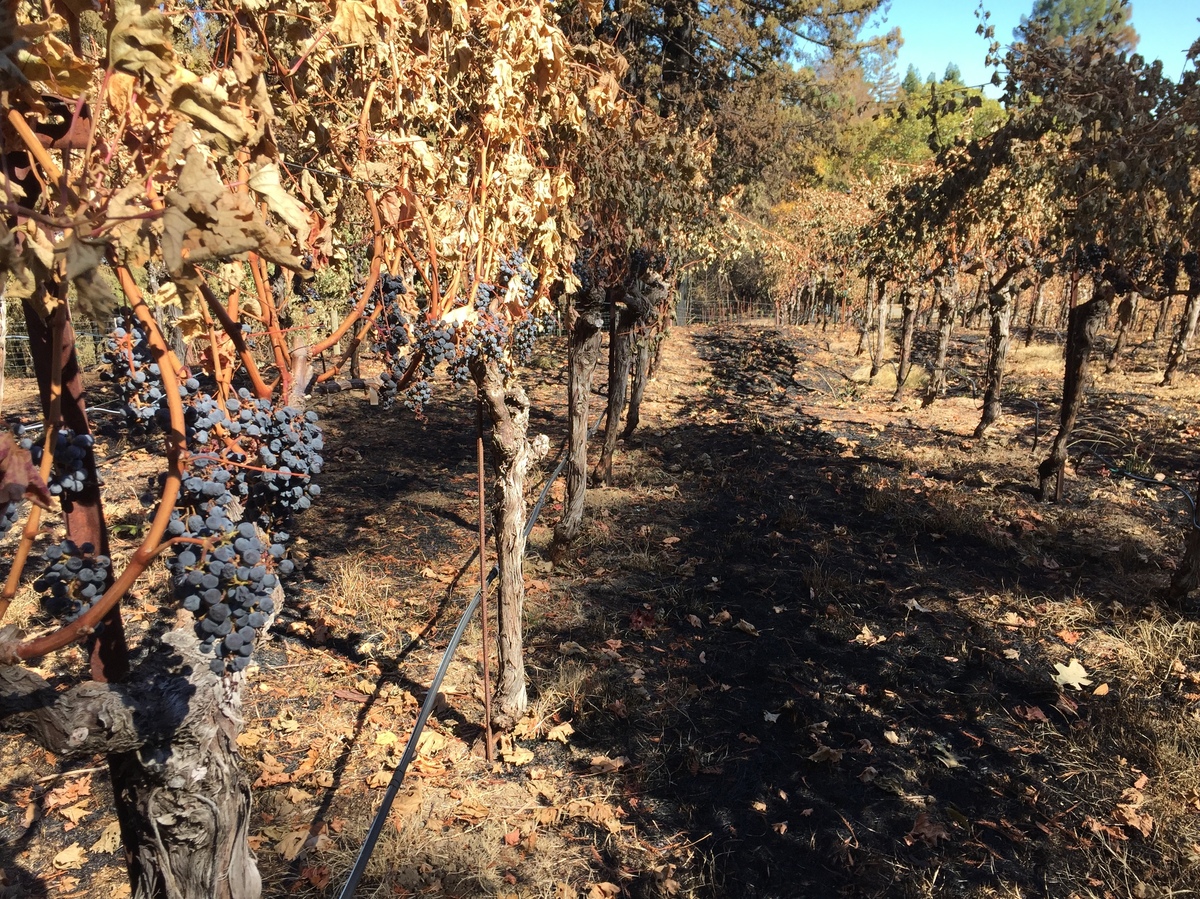 Forty percent of Segassia Vineyard's vines were damaged after wildfires raged through Napa Valley in 2017.

Coverage of the fires raging through California this summer is hard for anyone to watch, but it's especially difficult for the Cates family.

"My wife can't even watch the news — it singes us to the core," says Chris Cates, a retired cardiologist whose family-owned Segassia Vineyard in Napa Valley, Calif., known for its rich cabernet, was ravaged by fires about this time last year.

His son, Andrew Cates, who operates Segassia and lives on the property, lost his home in the blaze. Fortunately, he was away at the time. While not all of the vines were lost, it will be 10 to 15 years before the vineyard is back to producing what it was before, says Chris Cates. The area around the vineyard, located on Mount Veeder, will never be the same — 1,500 redwoods burned.

Memories of that time are still painful for the Cates family to discuss. The October 2017 Tubbs fire in Napa and Sonoma counties claimed nearly 37,000 acres, 5,636 structures and 22 lives, making it the most destructive wildfire in California history. While many vineyard owners were in shock over the devastating losses, this father-son team set out to make the best of the tragedy.

"We said, 'What can we do in this situation?' We could lick our wounds, or we could get active and try to do something good," says Chris Cates.

First, they looked at what remained of Segassia. While the fires burned multiple structures on their property and melted all the irrigation equipment ("microwaved it from the inside out," says Chris Cates), only about 40 percent of the vines were actually burnt. The grapes could not be used for winemaking because of smoke taint, but they weren't entirely un-harvestable. 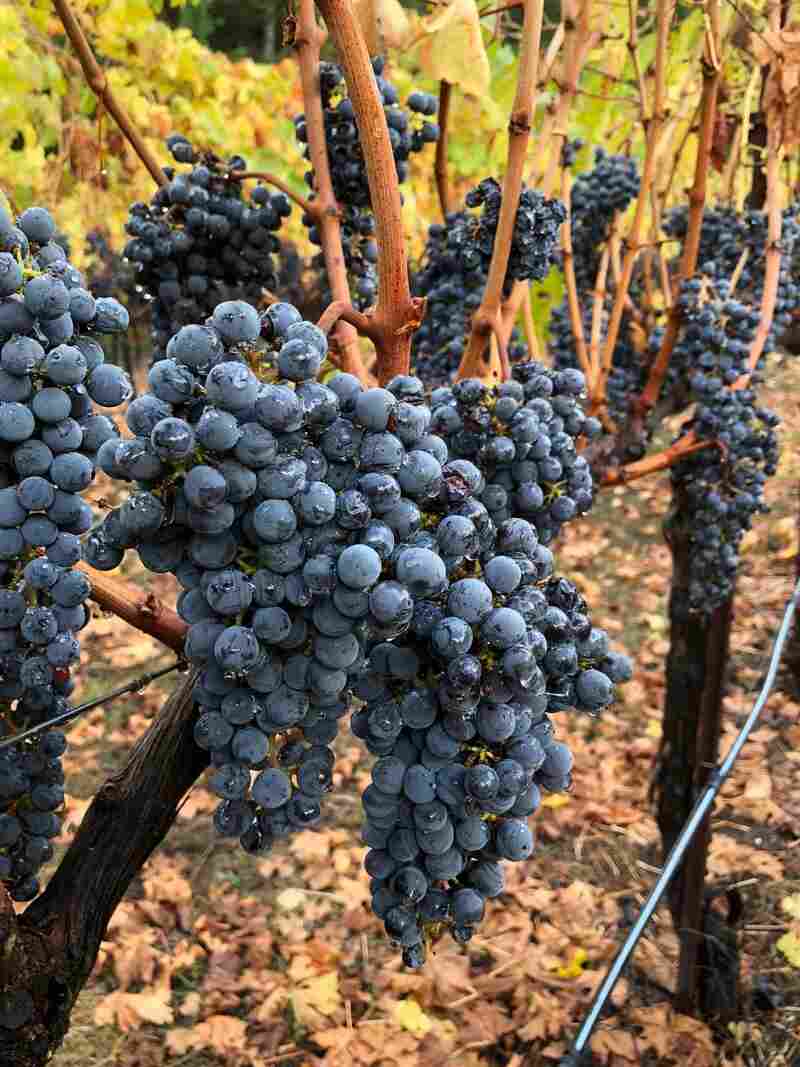 These grapes, tainted by smoke from the wildfires that burned through California's wine country last year, were picked quickly and turned into Rescue RayZins instead of being thrown away. Andrew Cates hide caption 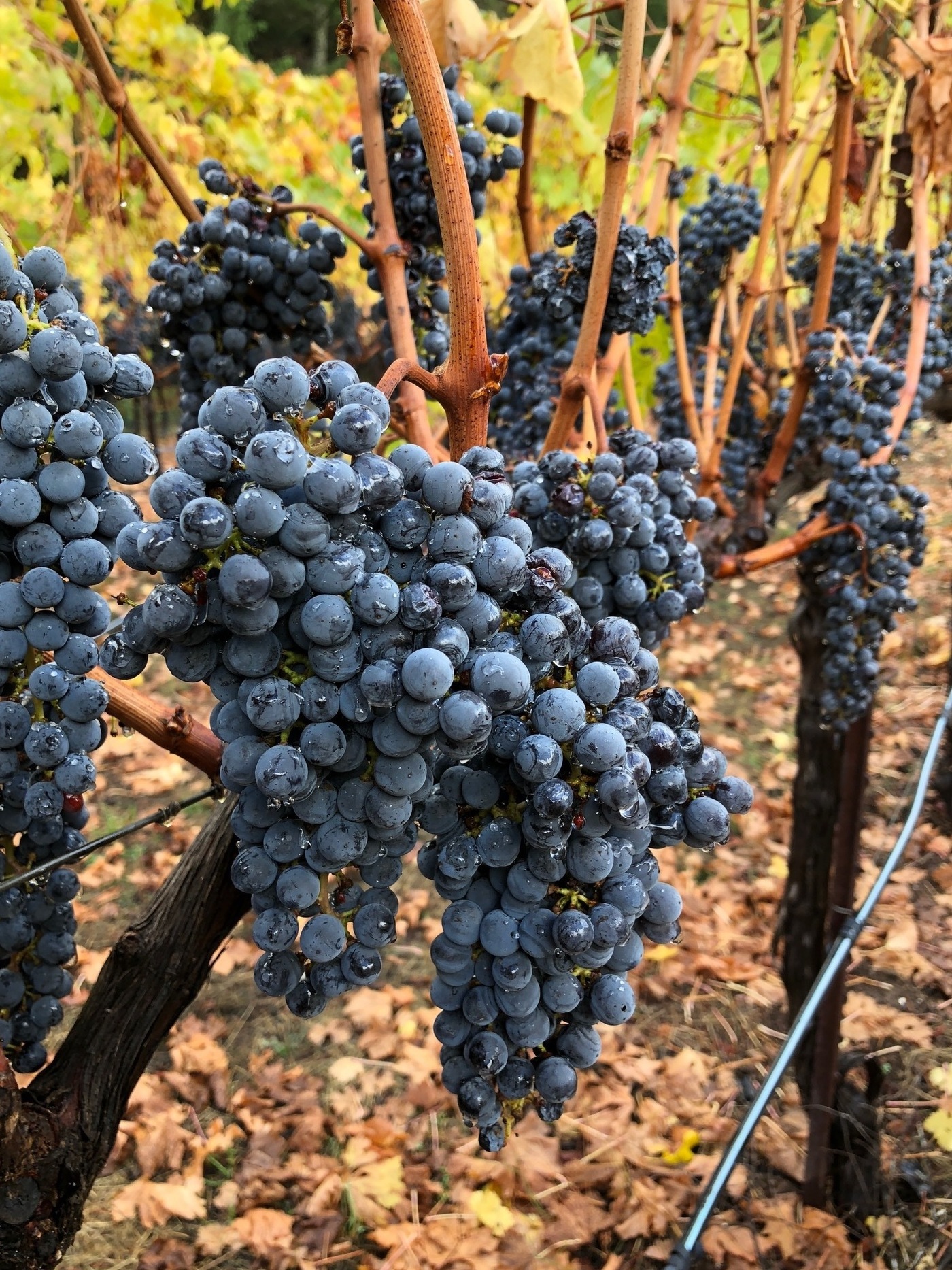 These grapes, tainted by smoke from the wildfires that burned through California's wine country last year, were picked quickly and turned into Rescue RayZins instead of being thrown away.

Smoke taint only becomes a problem after fermentation, Andrew Cates says, when it can give wine a campfire-like flavor. Instead, they decided to test the grapes to see how they would taste as raisins.

A few years ago, the Cateses developed a patented process for turning wine grapes into raisins in an effort to reduce food waste. (About 5 percent of grapes are left behind on the vine each year and go to waste, says Andrew Cates.) The result was a crunchy, antioxidant-packed snack they called RayZyns.

They decided to try their method with the smoke-tainted grapes. When dehydrated into RayZyns, the smoke-tainted cabernet grapes tasted fine — quite good, in fact, with no smoky notes — and contained the antioxidants of a glass of wine, but in concentrated, edible form.

"Even though the smoke taint was there, we knew [RayZyns] would be a perfect product to utilize instead of throwing all these grapes away, which was what most people were going to do," says Andrew Cates.

Once word got out, many more vineyards wanted to donate their fruit to the raisin-making project. But even with the overwhelming response, finding labor, getting permits to enter burn areas and navigating the chaos in Napa Valley (including no water on many properties) proved challenging. Finances also became an issue, as the Cateses paid out of pocket for everything because they had to process the grapes immediately.

"When you're picking grapes, it's a full-court press. You have to do it as fast as possible, usually in the heat of the day, and keep them cool before they start fermenting," explains Andrew Cates.

They called Steve Klein of Buena Tierra Vineyard Management, who was able to mobilize crews and, starting with Segassia, went from vineyard to vineyard, harvesting around 100 tons of fruit in November 2017. For a visual, imagine a football field covered with 200 to 300 Jacuzzis filled with grapes, says Chris Cates.

Early in 2018, they launched Rescue RayZyns, offering both regular and dark chocolate-coated varieties of the nonalcoholic seeded wine raisin. One dollar from every online purchase is split between the Napa Valley Community Disaster Relief Fund and the Food Recovery Network, an organization devoted to fighting food waste.

As for this year's crops that may have been damaged by smoke taint, "we are poised to react," says Andrew Cates. "It's more work for us, but it's important."

The amount of smoke taint on grapes around Mendocino County, where fires are currently the worst, is yet to be determined. If people in that area want to donate their grapes to the Rescue RayZyn project, they'll be able to do so, Andrew Cates says. The Cates family created RayZyns in a bid to reduce food waste on their vineyard by using leftover grapes to make raisins. pialhovik/Getty Images/iStockphoto hide caption

Both Andrew and Chris Cates are aware that critics might be skeptical of a company going into an area of devastation to make the best of a bad situation — but also turn a profit. Yet it doesn't deter them.

"Almost anybody who does good in time of a disaster will always face that question of motive," says Chris Cates. "We've been through it ourselves; we lost everything. It's not like we were outsiders and said, 'There's a way to come in here and snipe something out of this.' "

The next step for the Cateses is to take their efforts to a grander level by working with government agencies to aid in other disasters. RayZyns have a long shelf life (two to four years) and don't require refrigeration, so they have a lot of potential as a disaster food, says Andrew Cates. They reached out to the Federal Emergency Management Agency last year during recovery efforts after Hurricane Maria hit Puerto Rico, but were unable to help due to time constraints.

For now, the Cateses sell Rescue RayZyns online and in wine shops around the country; their regular RayZyns are sold at Costco and handed out to passengers on several airlines. But father and son say they measure success not in profit, but in the impact they've been able to make on their community and in advancing the way people think about food waste.

"If you think about things in the midst of hardship, you can do a lot of good," says Chris Cates, "but you have to think about them in a different way."