Accessibility links
Amid Palm Oil Boycott, India Wants To Produce More Of It : The Salt India is the world's biggest consumer of palm oil, a crop which threatens the country's water supply and is linked to deforestation. But the government faces little opposition to expand plantations. 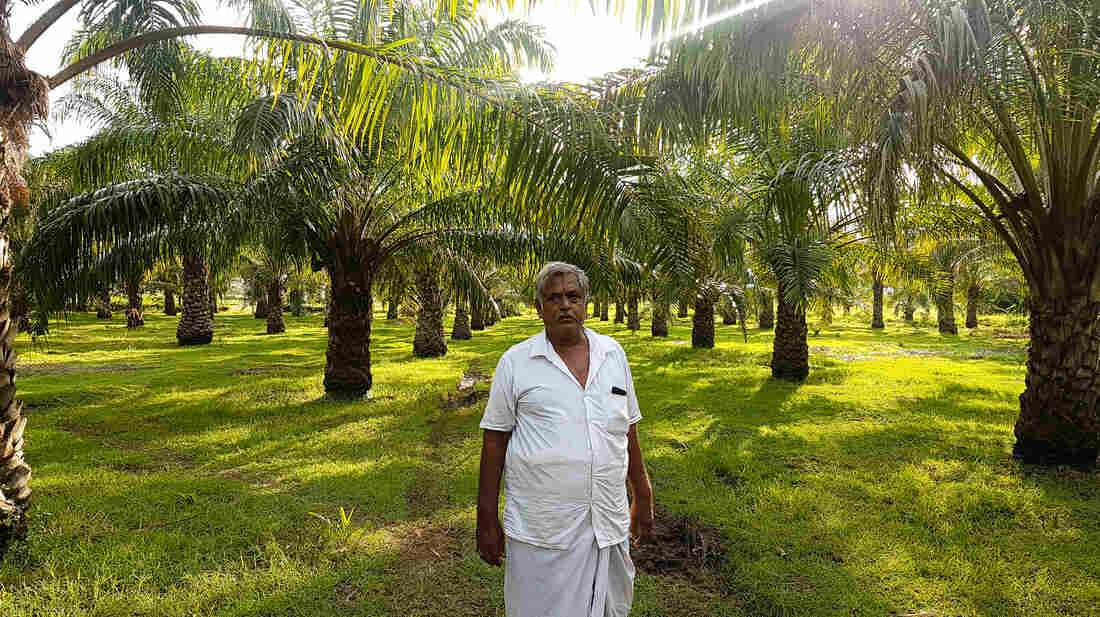 Sampath, 63, planted these oil palm trees on his farm in Tamil Nadu, India, 12 years ago, but has yet to turn a profit. Sushmita Pathak/NPR hide caption 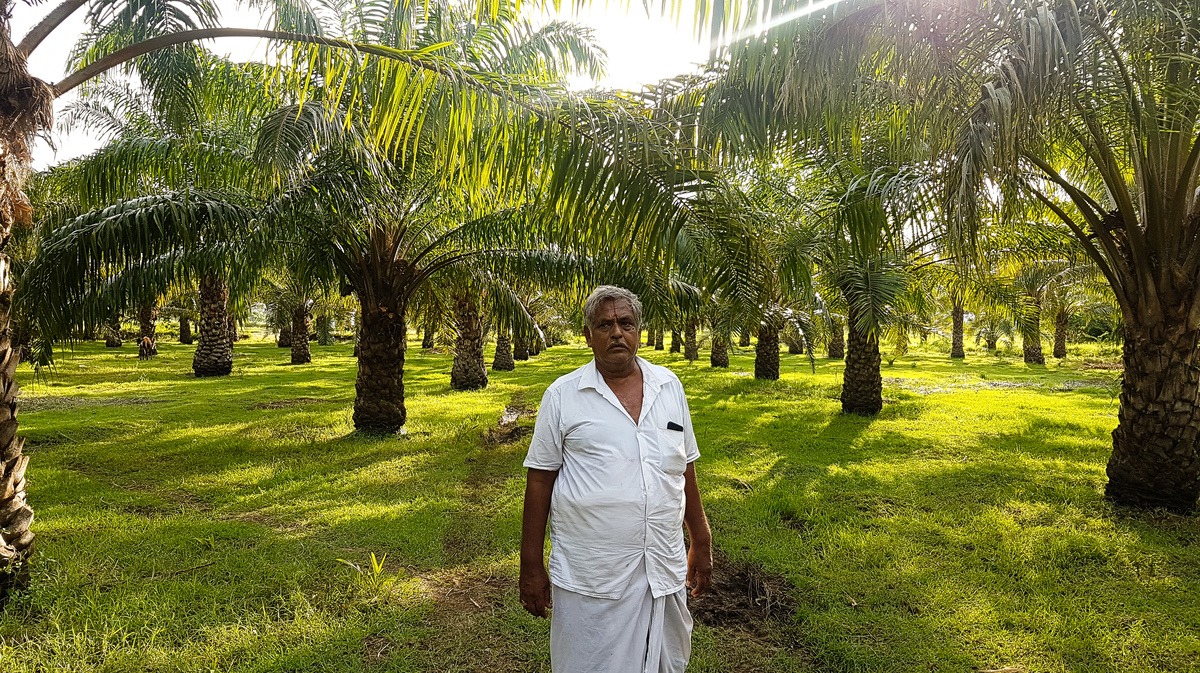 Sampath, 63, planted these oil palm trees on his farm in Tamil Nadu, India, 12 years ago, but has yet to turn a profit.

But 10 years ago, a representative from a nearby palm oil production plant visited, and convinced him to switch over to oil palms.

Oil palms grow bunches of fruit that look like dates or small plums, flanked by prickly fronds. The fruit is pressed, yielding palm oil — which is used in all sorts of processed foods, cosmetics and even biofuel.

In India, it's one of the cheapest cooking oils. With 1.3 billion people, India consumes a lot of it, and is the world's largest consumer and importer of palm oil. The government even includes palm oil in food rations for the poor.

When Elamparithi, now 55, switched his family farm over to oil palms, the Indian government paid 90 percent of the cost of buying and planting the new trees. 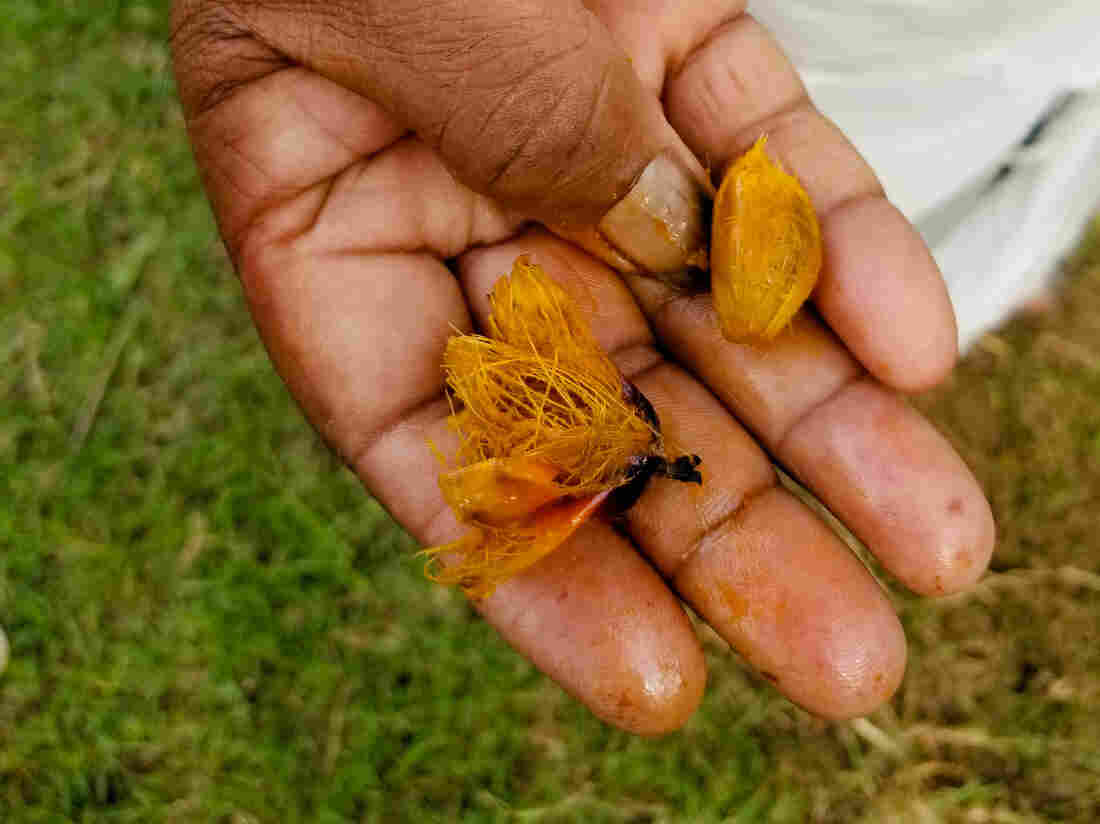 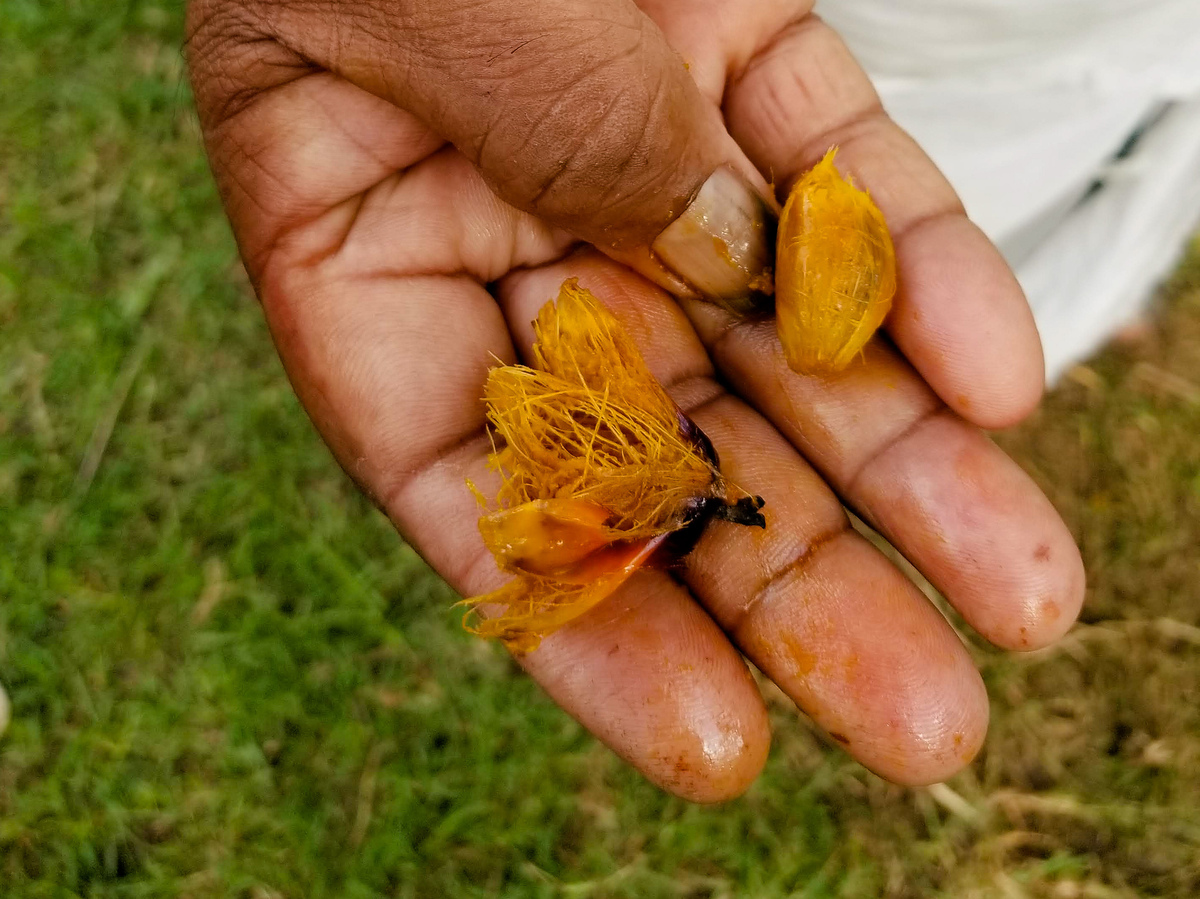 Oil palm grower Sampath displays fruit from his oil palm trees. The fruit is pressed to make palm oil, one of the cheapest cooking oils.

"Pure oil!" Elamparithi says, happy with his investment. Even the birds like to eat it, he laughs.

India offers these subsidies, because two-thirds of its palm oil comes from abroad — mostly from Indonesia and Malaysia — and that's getting expensive. The more India can produce at home, the less it spends on imports.

"It's a huge drag on India's foreign exchange reserves. Every year, we spend $11 to $12 billion on importing edible oils, and palm oil is the most economical vegetable oil on the world market," says G. Chandrashekhar, an economist and commodities expert.

Plus, he says oil palm plantation "gives livelihood to millions of small growers." 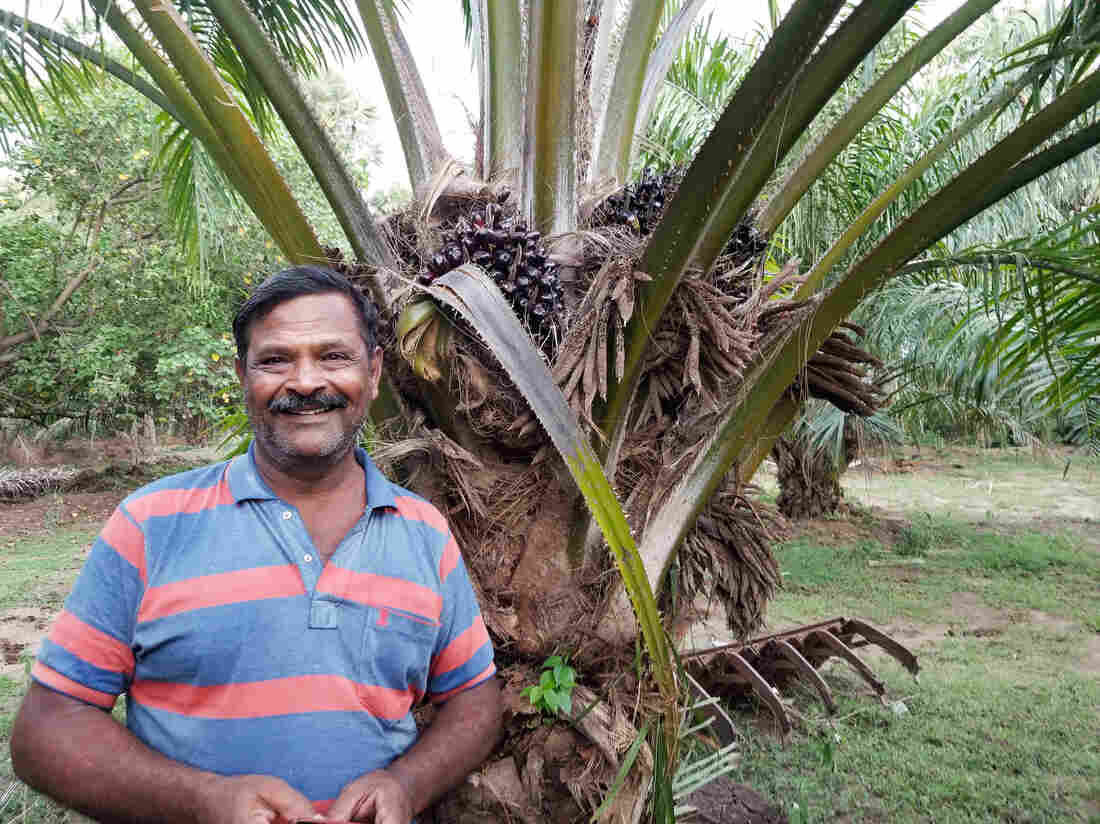 R. Elamparithi, 55, a farmer in Tamil Nadu, India, took advantage of government subsidies that paid for 90 percent of the cost of switching his farm over to oil palms. Lauren Frayer / NPR hide caption 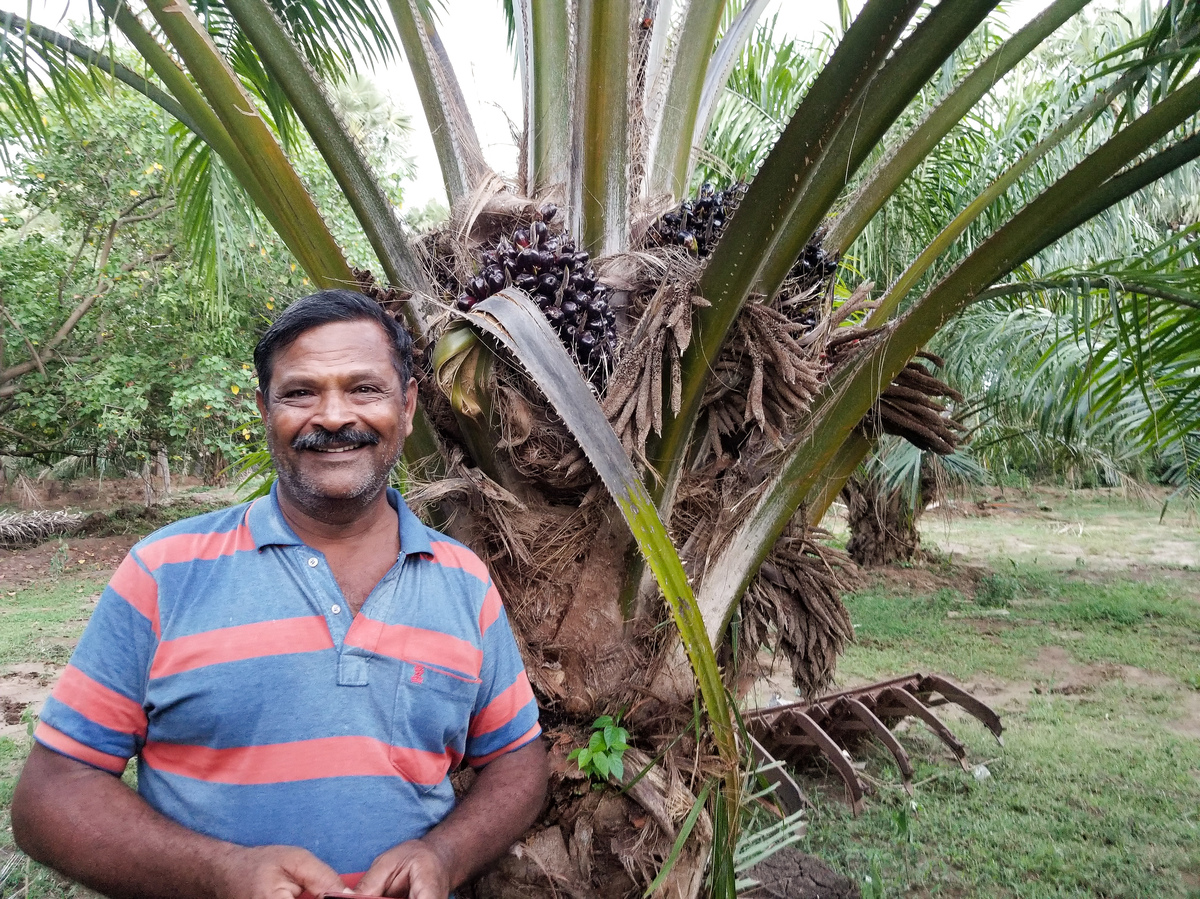 R. Elamparithi, 55, a farmer in Tamil Nadu, India, took advantage of government subsidies that paid for 90 percent of the cost of switching his farm over to oil palms.

Most of India's oil palm growers are not big, industrial farmers. Elamparithi, for example, has five hectares (about 12 acres) in total.

Chandrashekhar wants the Indian government to offer even more subsidies to boost the number of oil palm growers, from about 300,000 hectares currently under cultivation, up to 1.9 million hectares.

Palm oil has long been grown in India, and several governments have tried to boost domestic production. Under Prime Minister Narendra Modi, whose signature 'Make in India' initiative encourages domestic manufacturing, incentives for oil palm growers have been increased twice, in 2015 and 2017. The government has raised subsidies, and lifted a cap on the number of hectares a single farmer can cultivate.

The trees have a much higher yield of oil than groundnuts, canola or sunflowers. Producing palm oil is a way for India to pull millions out of poverty, advocates say.

"If in that process, there is some damage to the environment — so be it!" Chandrashekhar exclaims.

Environmentalists blame palm oil for ecological damage in Indonesia and Malaysia, where much of it is farmed and produced. Many consumers boycott palm oil. Some products marketed in Europe and the United States are labeled as "palm oil free."

But that campaign has not yet penetrated India — at least not enough to affect growers or consumers much.

"We have no big movement against it," says Madhu Ramnath, an anthropologist and ecologist. "Nor does the government tell us the downside of it."

Instead, the Indian government and palm oil advocates insist the cultivation of oil palms won't hurt this country's environment as much as it has elsewhere.

Despite a big government push to plant more, oil palms still cover less than 0.2 percent of Indian land devoted to agriculture — not enough to hurt biodiversity.

As for deforestation, which has been a problem in Indonesia and Malaysia, much of the land where oil palms are being planted in India was already deforested for rice paddies — as in Elamparithi's case.

And India doesn't have orangutans, at least not in the wild, whose habitat is being destroyed by palm oil plantations in Indonesia and Malaysia.

The biggest problem with palm oil cultivation in India is water — a lack of it.

"Farmers are already backing off from rice because there is not much water," says Ramnath. "But then you put the most water-intensive thing in a place where there's no water! It's distress farming. The farmer is really with his back up against the wall." 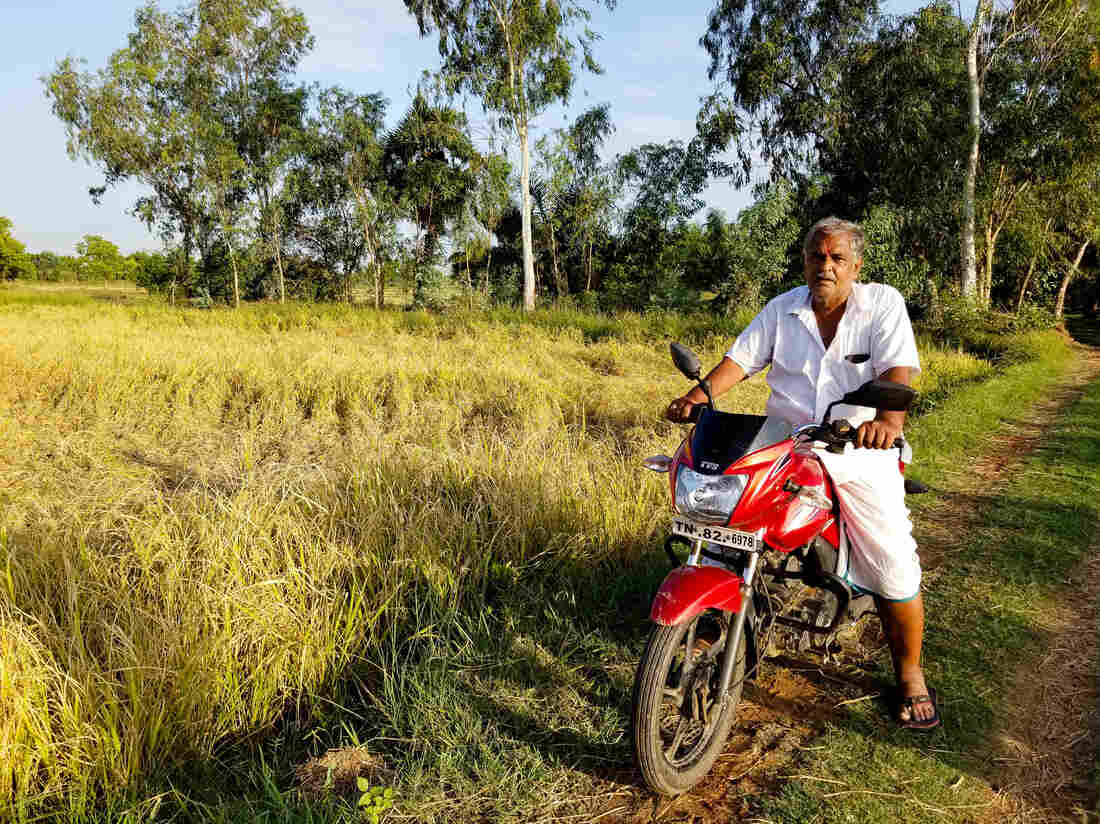 Sampath, 63, planted these oil palm trees on his farm in Tamil Nadu 12 years ago, but has yet to turn a profit. Lauren Frayer / NPR hide caption 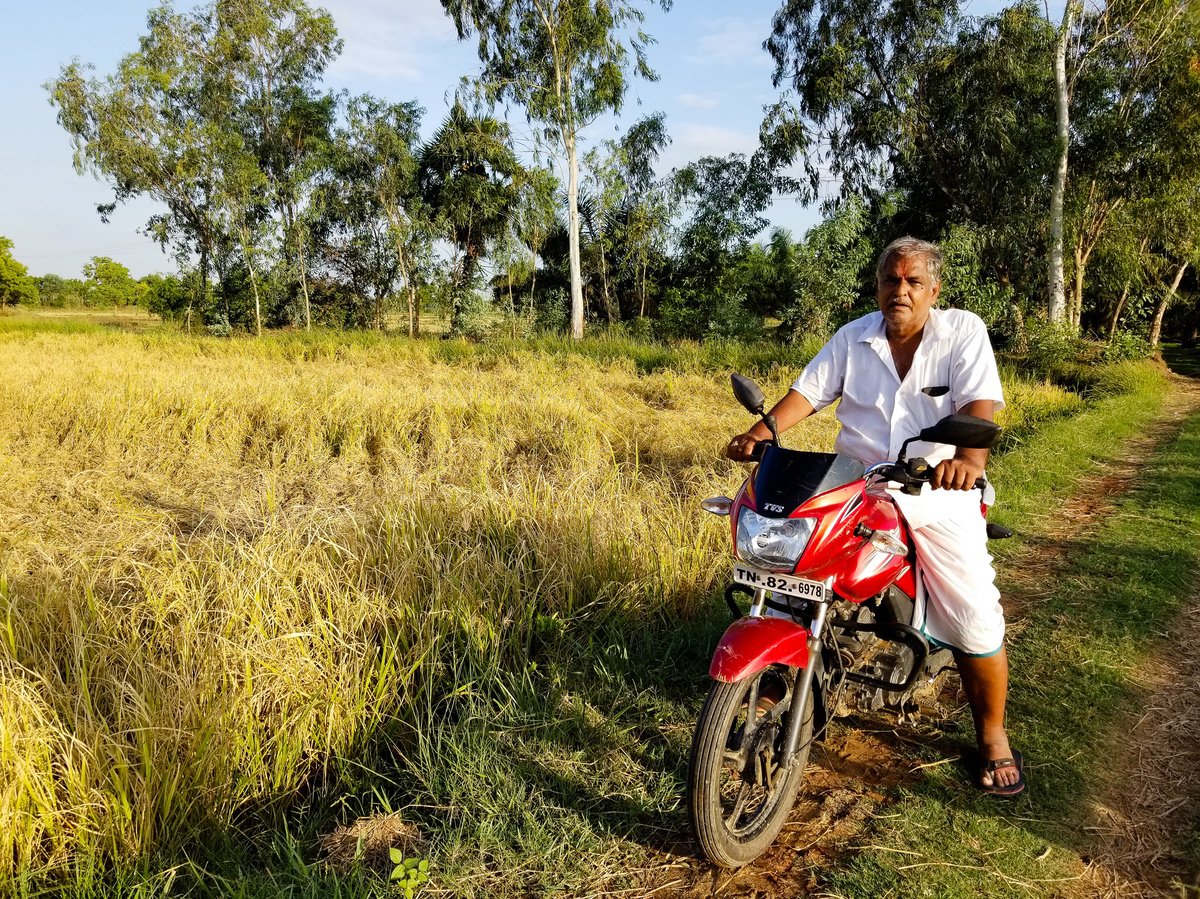 Sampath, 63, planted these oil palm trees on his farm in Tamil Nadu 12 years ago, but has yet to turn a profit.

Ramnath says farmers like Elamparithi might not realize it yet, because they've enjoyed relief from start-up costs, due to government subsidies. But they might get stuck. Once they switch to palm oil, it's hard to switch back, Ramnath says, because fertilizers used on the trees degrade and acidify the soil, rendering it unfit to cultivate other crops.

The Indian government does pay for oil palm growers to drill irrigation wells. It also gives them free electricity to run water pumps.

But that's lowered the water table, which can lead to increasing concentrations of arsenic in drinking water, and taint coastal freshwater with salt.

Another farmer, Sampath, who goes by one name, has been irrigating his oil palms for 12 years. But water from one of his wells has suddenly turned salty. His farm is less than 10 miles from the sea. As freshwater is extracted, sea water rushes in to replace it underground.

"We go deeper and deeper, but get only salty water," Sampath, 63, explains. "Nothing can be done. Only one crop now, in the rainy season."

The crops can't be irrigated with salt water; they'll die. He's been forced to abandon all of his other crops, leave fields fallow and dry — and conserve water for his oil palms.

Sampath planted his oil palms, a less labor-intensive crop, after he turned 50. Once the trees are planted, the fruit is easier to pick than the constant, back-breaking work of planting and harvesting rice in stagnant water. It would be a good crop for him in old age, he recalls thinking.

But 12 years later, Sampath has yet to turn a profit. His son, a software engineer in Mumbai, sends him money. That's the only way he survives. 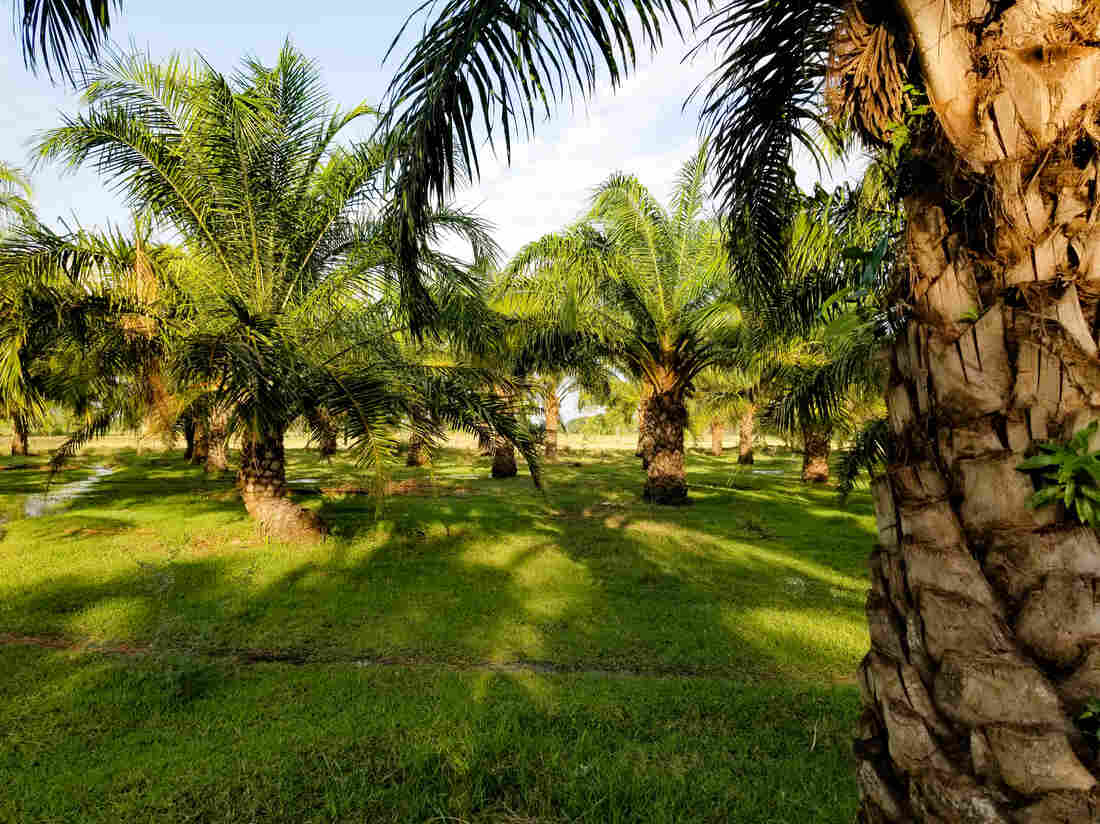 Sampath fondly recalls the optimism of his early palm-growing years, with all the government subsidies he received and special visits from representatives of big palm oil production companies. They sent outreach workers to teach him how to harvest the fruit.

He hopes the Indian government's push to cultivate palm oil won't backfire on farmers like him.