Accessibility links
Maine Asks Restaurant To Stop Giving Lobsters Cannabis Before Boiling Them : The Salt The owner of the eatery says she's giving compassionate cannabis to the crustaceans so that they don't feel pain. But the state isn't sure the practice is in line with health regulations. 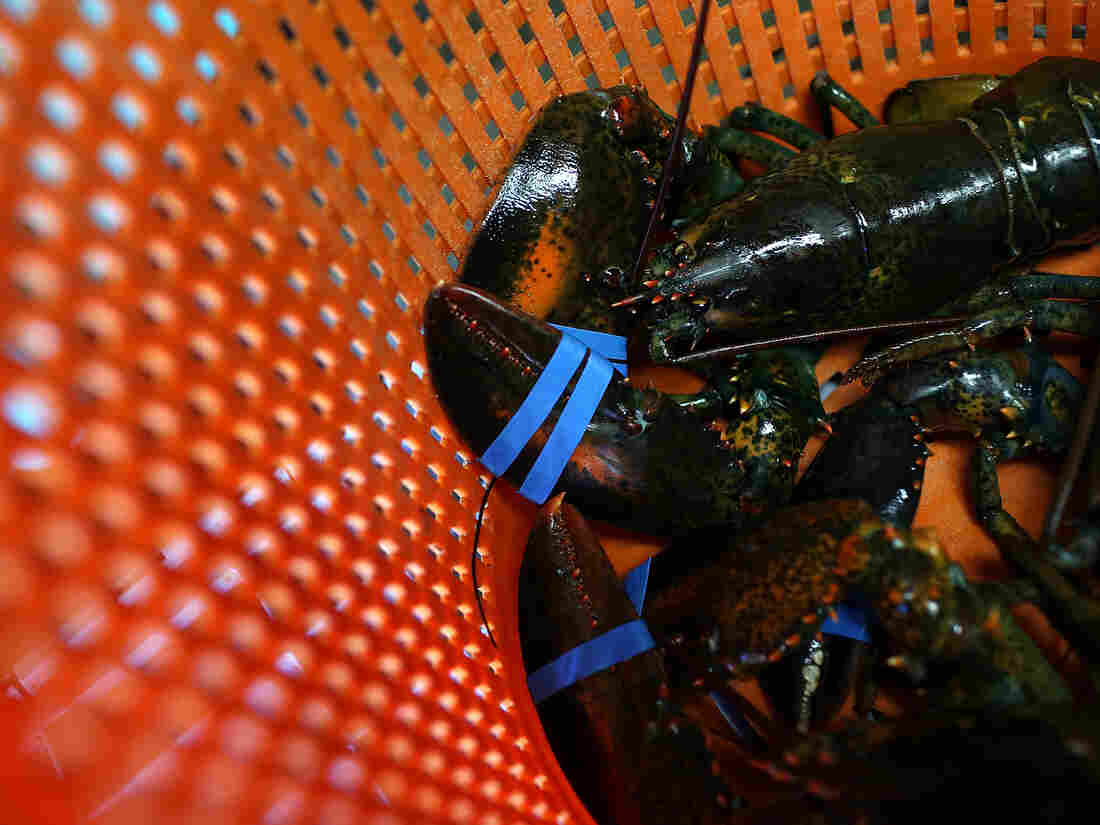 Charlotte Gill, owner of Charlotte's Legendary Lobster Pound in Maine, says she believes that cannabis can calm crustaceans before they are tossed into boiling water. Justin Sullivan/Getty Images hide caption 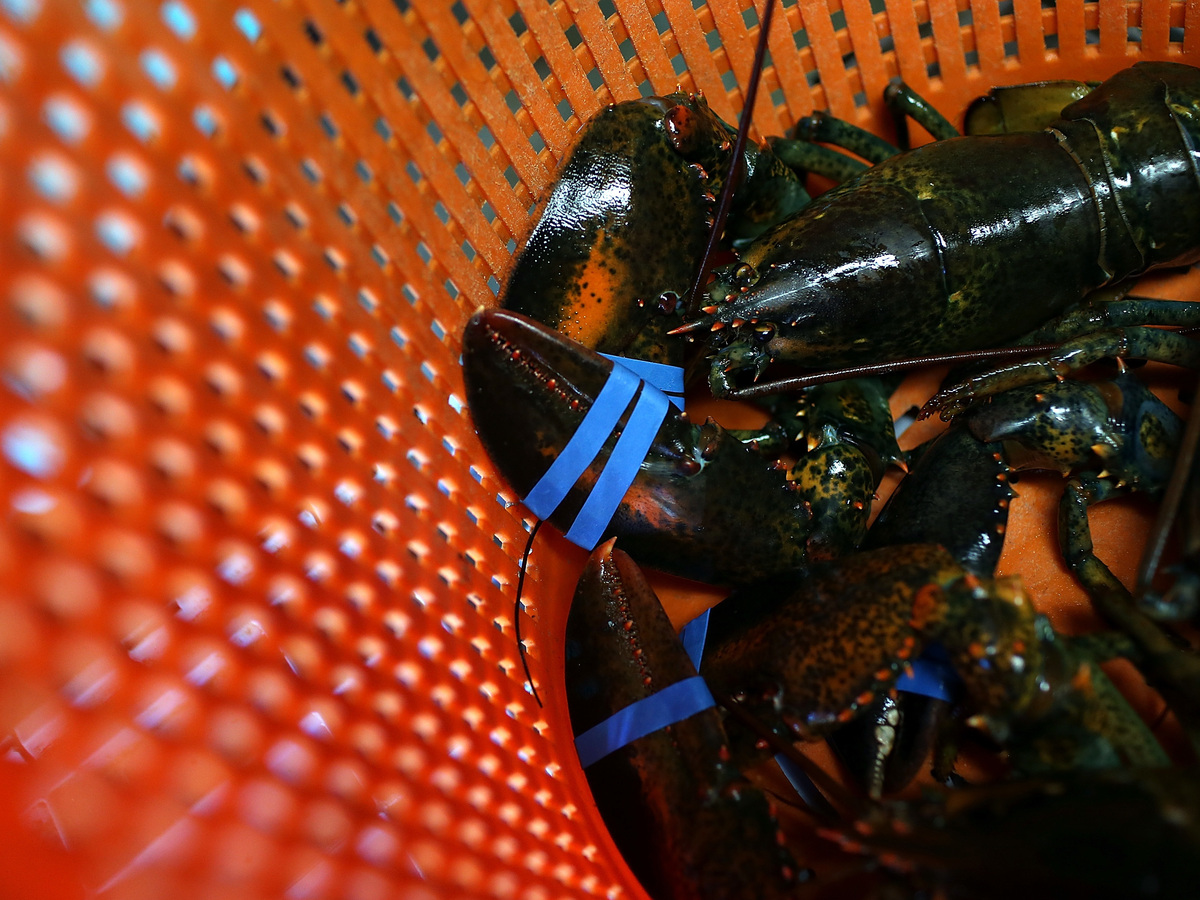 Charlotte Gill, owner of Charlotte's Legendary Lobster Pound in Maine, says she believes that cannabis can calm crustaceans before they are tossed into boiling water.

The state of Maine has asked the owner of a lobster restaurant to stop giving cannabis to lobsters in order to get them high before they die.

Charlotte Gill, owner of Charlotte's Legendary Lobster Pound in Southwest Harbor, Maine, says she is convinced that a small dose of cannabis can help calm crustaceans before they're cooked in a traditional lobster pot.

Gill has designed what could be considered the equivalent of a bong hit for lobsters in a small plastic box, without any residual effects for consumers, she says.

"Basically, it's a device that allows smoke to go through a hosing system or tubing system. It saturates a low level of water in a container and then it fills the air space above it," Gill says.

She calls this method "high-end lobster." She says the approach makes a monumental difference for the animal. "We are under this impression that lobsters don't feel any pain," Gill says, but as someone who regularly handles them and serves them to customers, she thinks that's "bull."

To Save Whales, Maine's Iconic Lobster Industry May Have To Change

Gill says she's observed enough lobsters to be able to tell that the little hit of marijuana makes a positive difference before they meet their maker. She thinks they're more relaxed, almost sedated, and that's something she considers more humane than the approach taken earlier this year in Switzerland, where it's now illegal to boil a live lobster. The Swiss law is part of country's constitutional provision to "protect the dignity of the creature," and is the first of its kind in the world. The law requires chefs cooking lobsters to "render them unconscious" first.

"What they've offered as other methods are you can stab it in the head or you can electrocute it, and I'm all for making the passage of the lobster better, but I'm thinking these are not good methods," Gill says.

"I don't think the science is there right now to say whether or not lobsters are anesthetized by marijuana, but it's an intriguing idea and maybe worthy of exploration," says Richard Wahle, a researcher at the school of marine science at the University of Maine and director of the Lobster Institute.

Wahle has also been fielding lots of questions about Charlotte's Legendary Lobster. He says Switzerland's effort to address lobster end-of-life treatment has given the issue a higher profile.

According to seafoodsource.com, Maine officials have asked — but "not commanded," notes Gill on the restaurant's website — the eatery to stop testing medical marijuana on the lobsters. While Gill is licensed to grow marijuana for medical use, state regulators cite a lack of legislation in this area and want to investigate whether administering cannabis to lobsters violates state regulations.

David Heidrich, spokesperson for the Maine Medical Marijuana Program, told the Portland Press Herald that "medical marijuana may only be grown for and provided to persons with a marijuana recommendation from a qualified medical provider. Lobsters are not people."

Gill says the restaurant would like to work with the state. "We are friend; not foe. Not the opposition. Only a little group of hardworking Mainers trying to make the world a kinder place," Gill wrote on her website."Therefore, we hope to walk this new road together with them, but are ultimately willing to blaze the trail alone if need be."

Gill says the restaurant is not currently selling the meat to its customers, and that the treated lobsters are used only for testing in order to have a "conclusive base of information to work from when were eventually met with these questions."

Gill says she was visited by an inspector from the state's medical marijuana program last week. She says that as a result of that visit and after consulting with several "legal minds" and making a few adjustments, she's confident that her method for "medicating" lobsters will comply with state regulations, and writes on her website that she hopes to offer the specially treated lobsters for sale by mid- to late October.

She is not planning to raise the price, either: "We are doing this out of compassion for the lobsters and their well-being, not our own."

Over the past few days, Gill says her phone at the lobster pound has been ringing off the hook and she's been inundated with emails. Reporters and others want to know about her unusual technique for what could be called — excuse the pun — a "half-baked lobster" minus the corn and potatoes.

"There was a lot of hate mail at first, and I think it was from people that didn't understand the process or thought that we weren't animal lovers or thought that our objective was just to get lobsters stoned in some crazy experiment," she says.

But as someone who says she loves animals and who's been running a lobster pound for the past seven years, Gill takes the whole business very seriously. When she serves up a succulent lobster dinner, she says she doesn't want anything to suffer.

Of course, animal rights groups say there's an even simpler way to avoid this dilemma: Don't eat animals at all. Gill says she not ready to become a vegetarian just yet, but she is focused on what she calls "high-end lobsters" and hopes her approach will elevate the discussion about how all animals raised for human consumption are treated.

This story comes to us from member station Maine Public Radio. NPR's Laurel Dalrymple contributed to this report.