Accessibility links
The Chile Pepper Rivalry Heats Up Between New Mexico's Hatch And Colorado's Pueblo : The Salt The Hatch chile has long been Goliath of peppers in the Southwest, but farmers in Colorado are trying to roast the competition by brazenly touting their lesser-known but mighty contender: the Pueblo. 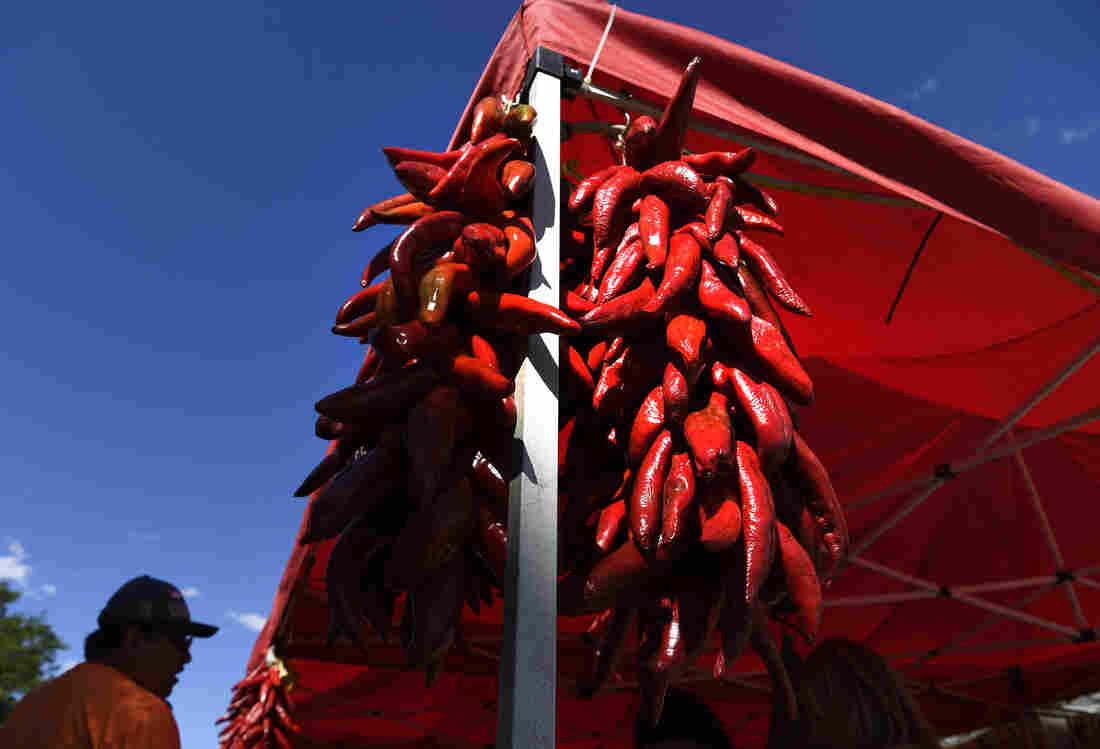 Pueblo Chiles are on display and for sale at the Di Tomaso Farms tent at the 2016 Chile and Frijoles Festival. Andy Cross/Denver Post/Getty Images hide caption 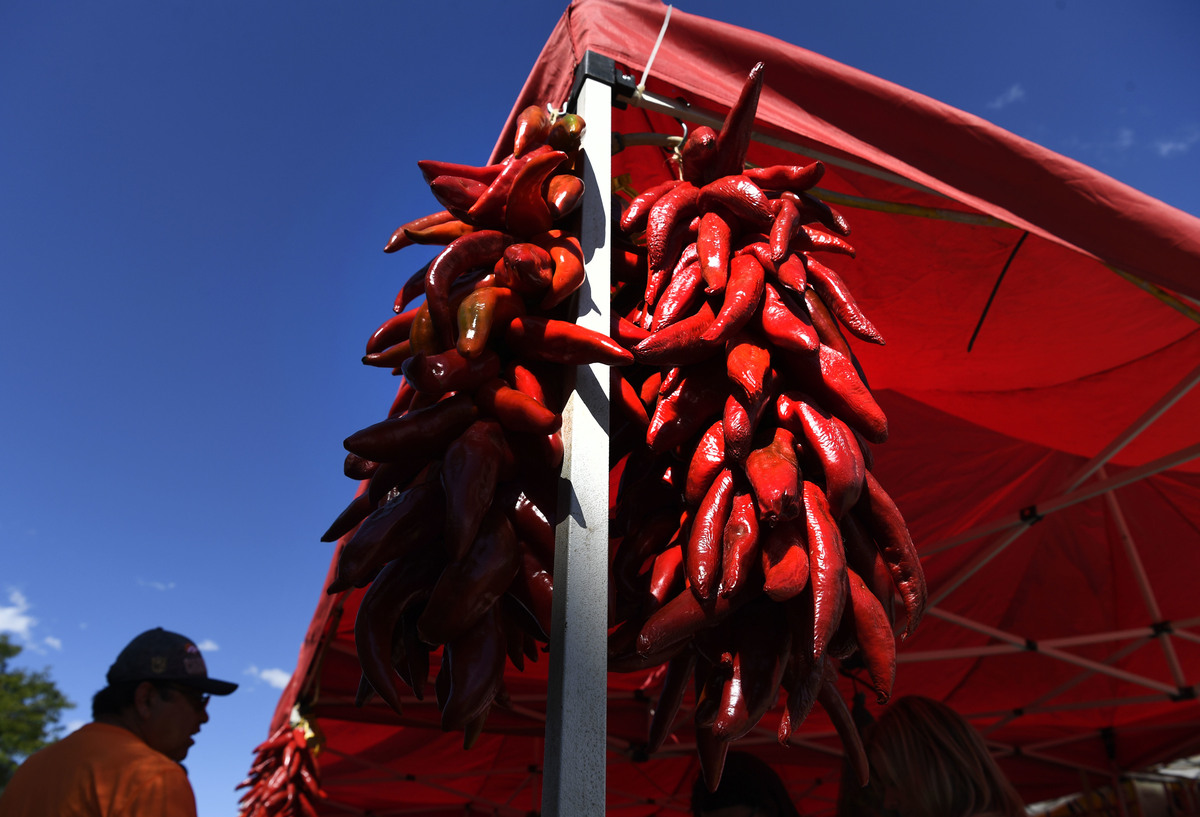 Pueblo Chiles are on display and for sale at the Di Tomaso Farms tent at the 2016 Chile and Frijoles Festival.

Fall has arrived, which means seasonal scents will start wafting across the United States. Dried leaves in the Northeast. The dusty Santa Ana winds of California. Pumpkin-spice everything at your local hipster hangout.

But residents in the American Southwest probably consider their aroma the best: the intoxicating, eye-watering eau de roasted chile.

From Texas to Arizona, Colorado to New Mexico, the air is thick with the smoke of peppers kissed with flames to blacken the skin, which makes the fruit easier to peel and prepare. People add the chiles (how the word is spelled in the American Southwest in both English and Spanish) to salsas, chop them up for use in everything from burritos to soups, and stuff them into Ziploc bags to store in their freezers for a fresh year-round supply.

Roastings take place in backyards, kitchens and supermarket parking lots, but they especially appear at pop-up roadside stands, where farmers lug out industrial-sized cylindrical roasters that roar like a jet engine, charring a 25-pound bag in about five minutes. Most of these stands sell the Hatch chile, a fat, fleshy, long green pepper grown in the valleys of southern New Mexico and named after a tiny village that calls itself the Chile Capital of the World.

It's a tasty pepper, and has enjoyed its culinary moments this decade, with profiles in national publications, cameos in the kitchens of James Beard Award winners, and special roastings in Manhattan.

But farmers in Colorado have something to say about that: Try our peppers, because they're better.

Their pride and joy is the Pueblo chile, named after the city that just hosted its 24th annual Chile and Frijoles Festival. It's generally hotter, more pungent and meatier than the Hatch. Latino and Italian farmers have grown the pepper for more than a century in the fertile valleys of southern Colorado, a high desert region that's nevertheless perfect for growing because of its altitude and abundant water supply.

Here, the Pueblo Chile goes by the name Mirasol — "looks at the sun," in Spanish — because the fruits grow upward instead of hang off a stem like most peppers of its size. It would've remained a regional curio if not for Dr. Michael Bartolo, a crop specialist and manager of Colorado State University's Arkansas Valley Research Center in Rocky Ford, Colo. His job since 1992 has been to research how to improve irrigation and production techniques for the state's $41 billion agricultural industry. 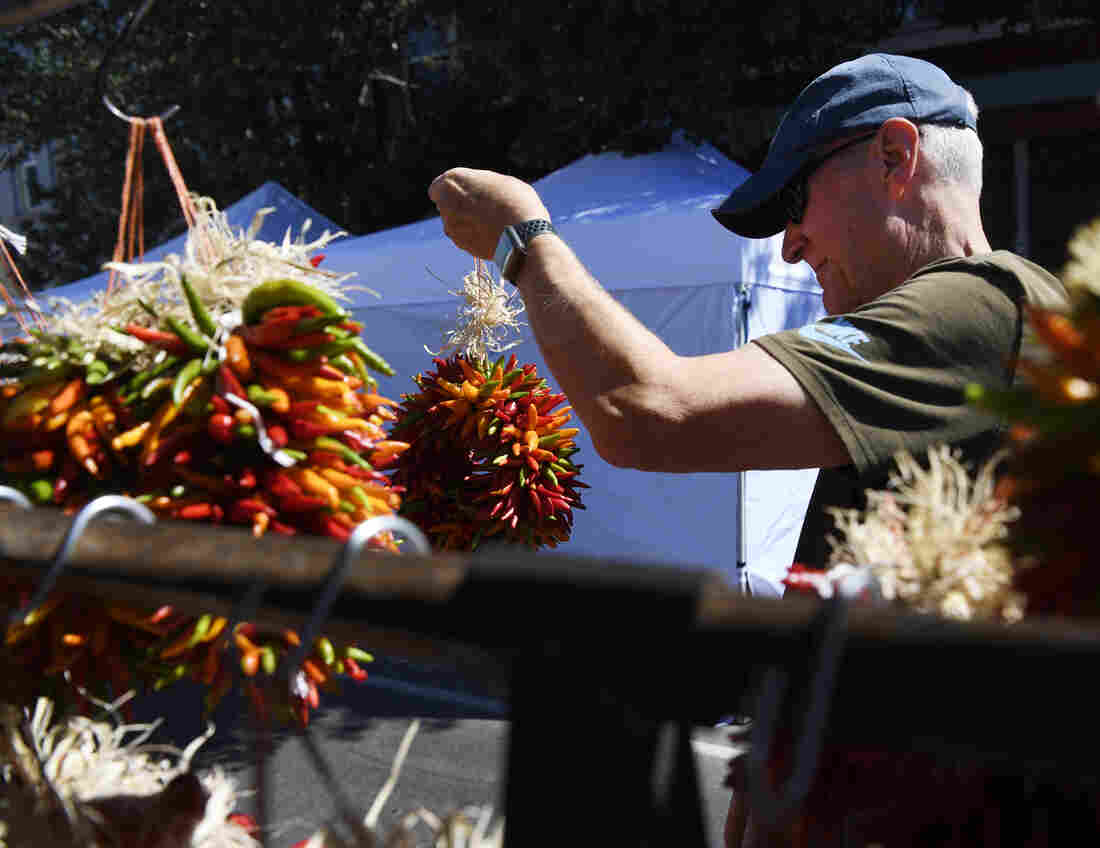 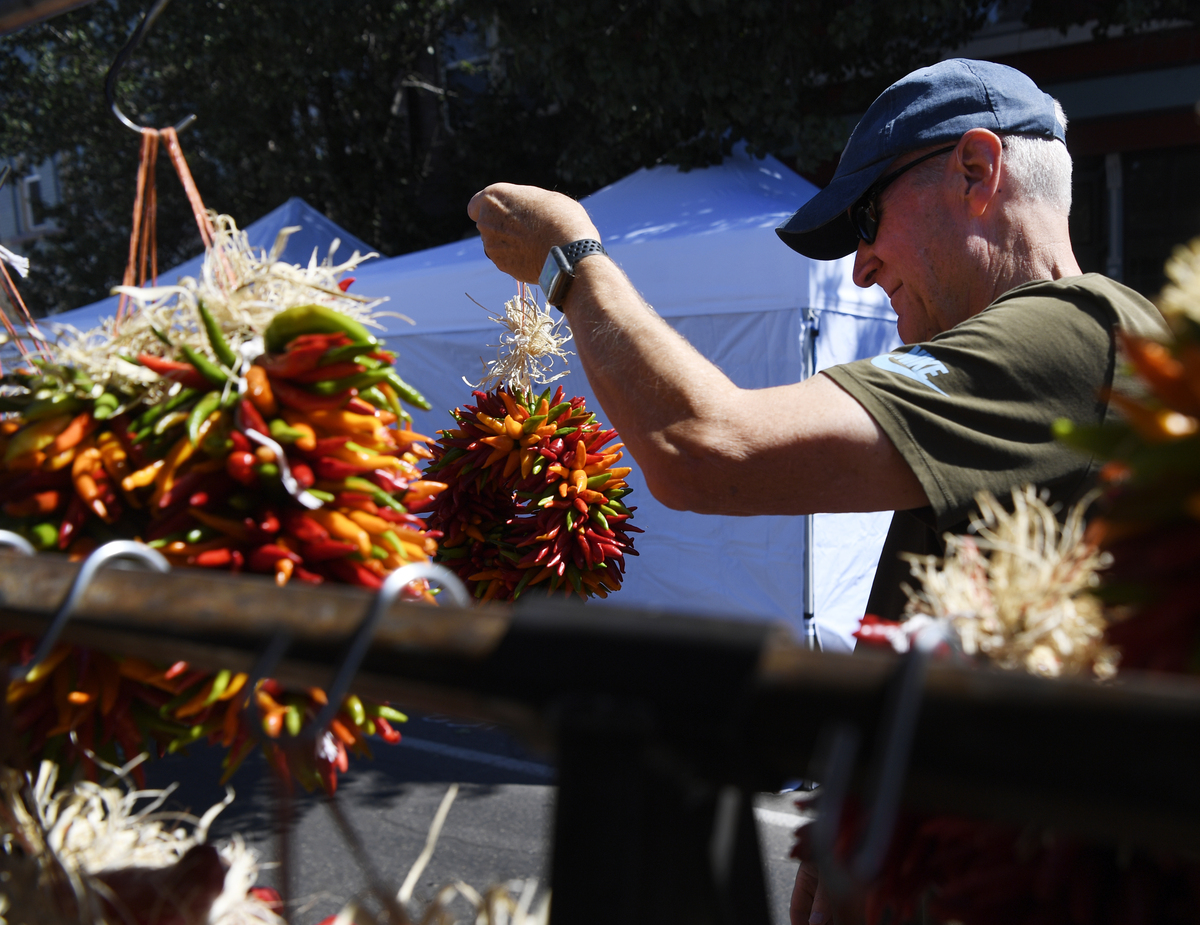 Geoff Walser picks out a ristra, a wreath-like decoration made from dried chiles, to purchase at the annual Pueblo Chile and Frijoles Festival, which draws thousands of chile lovers from Colorado and beyond.

In the early 1990s, Bartolo got a landrace (local cultivar) Mirasol from his uncle, Harry Mosco, who grew peppers on a farm east of Pueblo in the St. Charles Mesa region. Over the next decade, Bartolo cross-pollinated plants that came from his uncle's gift to create a pepper with a thicker wall for roasting.

He introduced the improved Mirasol — now named Mosco, in honor of his uncle — for commercial sales in 2005. It became a hit among farmers and consumers alike.

"In Colorado, we want to have that connection with our food," Bartolo says via cell phone from his fall workspace — a field. "It's part of our culture."

Farmers plant the Mosco, Mirasol and other chiles at the end of April and harvest well into October, just before frost begins. Bartolo hasn't documented it scientifically just yet, but he and other farmers are convinced that Colorado's elevation and big shifts in weather influence how their chiles end up tasting, just like terroir shapes the taste of wine grapes.

"Today, the morning low was in the 50s, and it'll get in the 90s," Bartolo says. "That adds unique flavor compounds."

As farmers ramped up production, Pueblo government officials — who have pushed culinary tourism over the past decade after a 2010 episode of the Travel Channel's Food Wars highlighted the region's famous Slopper (a hamburger smothered in green chile stew) — got an idea. In 2015, Pueblo County applied for and received a $143,000 grant from the U.S. Department of Agriculture that allowed farmers to create the Pueblo Chile Growers Association to better promote their product.

"Farmers are very independently minded people," Bartolo says. "That's why they're farmers. But they realize that to get into the market, they gotta pool together and work with people to sell their products."

The grant has already achieved results. Whole Foods announced in 2015 that they would stock Pueblo chiles instead of Hatch in all Colorado stores and throughout Utah, Kansas, Idaho and Utah. For the past three years, Colorado Gov. John Hickenlooper has proclaimed the second Saturday of the Colorado State Fair (held in Pueblo) as Pueblo Chile Day. Last year, the State Legislature approved a pepper-themed license plate that features a Mirasol plant, with snow-capped Rockies as a backdrop. One of the bill's sponsors, State Assemblywoman Daneya Esgar, frequently uses her Facebook page to post pictures of her enjoying Pueblo chiles using the hashtags #nohatchhere and #pueblochileisthebestchile.

The Chile Grower's Association has also applied to trademark "Pueblo chile" to ensure that others don't try to pass off their crop as the real thing. But the Pueblo chile has quite a way before it can even try to catch up to the Hatch's success. 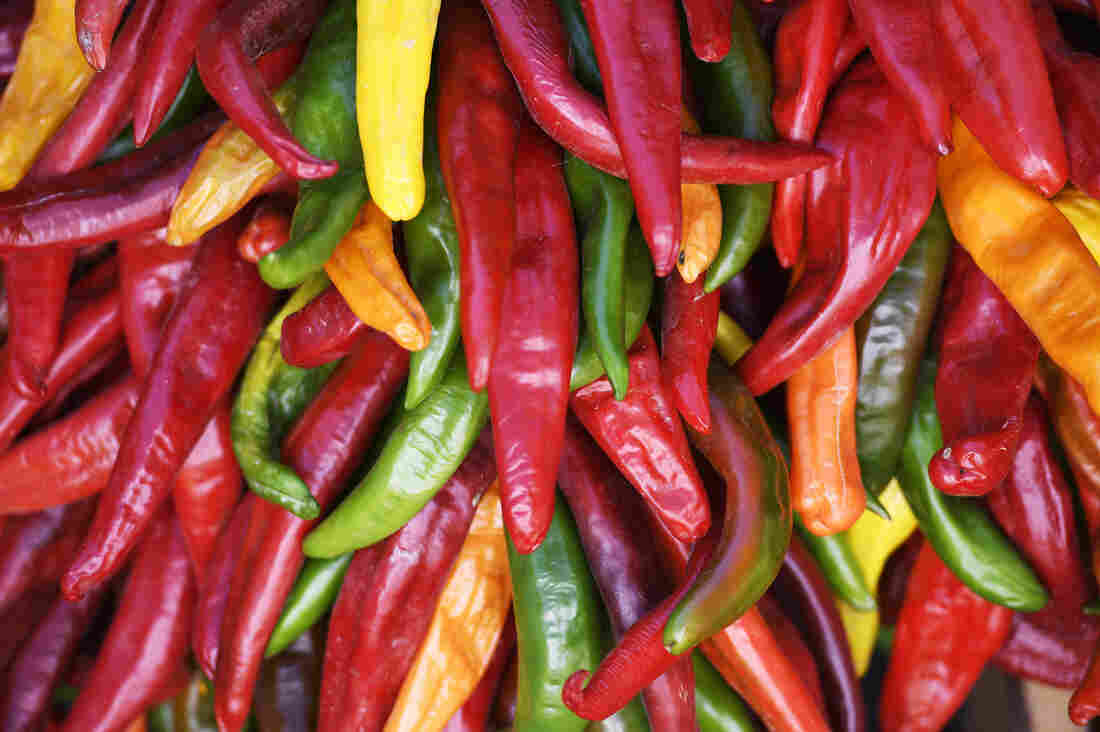 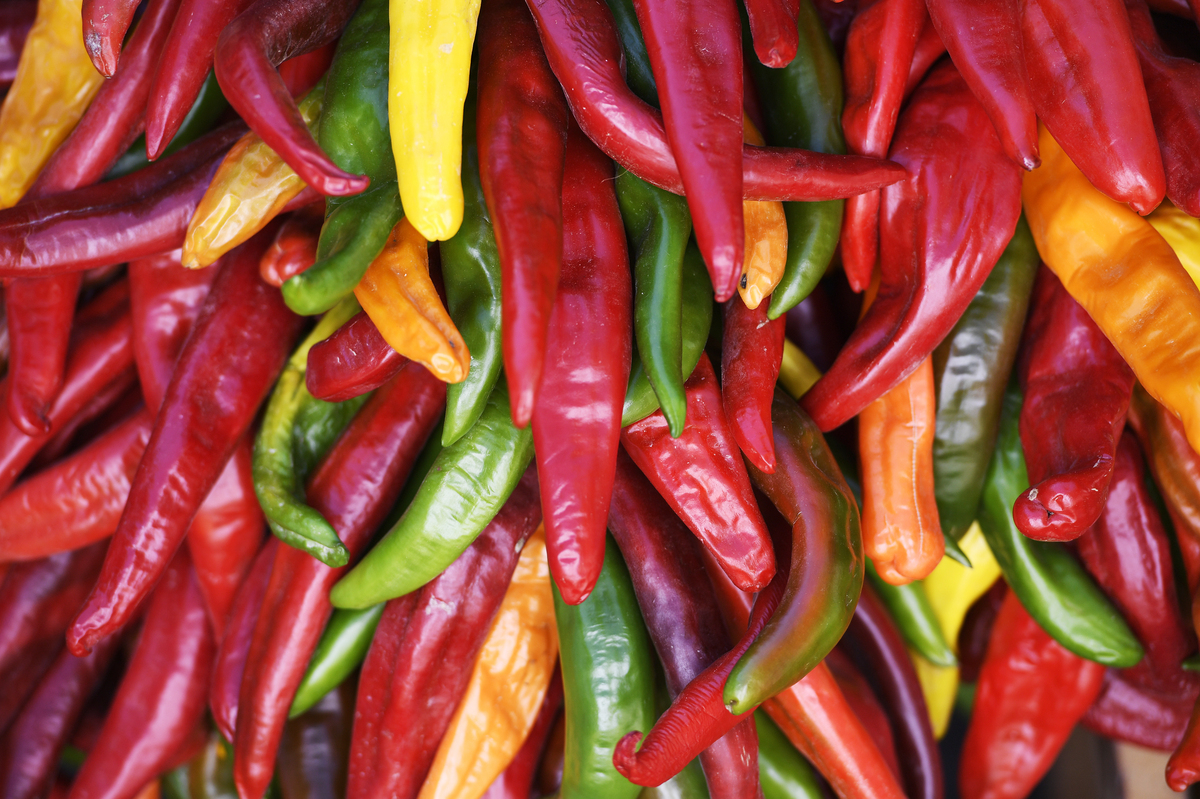 Colorful chiles hang in The Legend Brand booth last month at the annual Pueblo Chile and Frijoles Festival in Colorado.

Even more telling was what happened this spring when the Denver Broncos announced they would sell green chile dishes at Broncos Stadium at Mile High.

Only problem? The pepper would be Hatch.

"It sure pissed a lot of people off," says Donielle Gonzales, a Pueblo native who's the executive director for the Chile Grower's Association and the tourism director for the Greater Pueblo Chamber of Commerce. "No mincing words about that. Even to the point that some people said, 'We're boycotting. We're not going to sell to people who wear the Broncos.'"

Gonzales, however, took the Broncos' snub in stride. "The Broncos are in the business of making money and have a responsibility to their shareholders. Our chile growers aren't there to compete with that yet. Hopefully, one day."

Toward that, the Chile Growers Association will reapply for their grant in 2019 so they can better brand both regionally and nationally. "It's a long-term vision. It's a journey, not a destination," Gonzales says.

"We definitely brought back chiles from Pueblo, so when you popped the trunk on the car ride home, there was a cooler or two packed with dry ice and bags of frozen chiles," she says. "My parents could make the trip to Southern Colorado in about a day when I was growing up, which is a really long day in the car. But when you are hauling chiles, you are motivated to get home and get it back in the freezer."

And if you happen to get some Pueblo chiles in your kitchen this fall?

Gonzales says she prefers to eat them whole, roasted in a flour tortilla with cheese and garlic salt, then wrapped like a burrito. Maestas likes chile-and-cheese omelettes. As for Bartolo, he recalls a childhood favorite from life on the farm: "Fresh Italian bread out of the oven, and just slap on the chile," he says with a laugh. "Oh, my god. Just a simple way to eat it, and the best way."