Accessibility links
How A 19th Century Chemist Took On The Food Industry With A Grisly Experiment : The Salt Deborah Blum's book, The Poison Squad, tells how Harvey Washington Wiley and his band of chemists crusaded to remove toxins, such as arsenic and borax, from food. How? By testing them on volunteers. 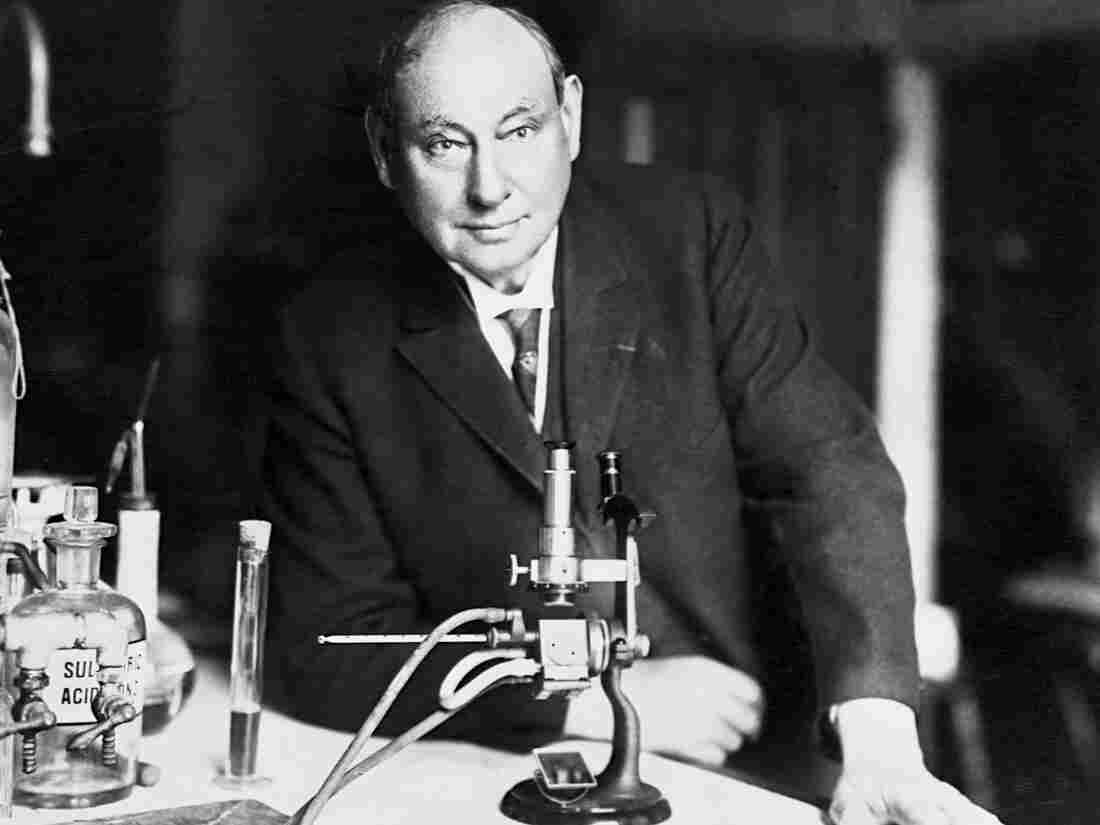 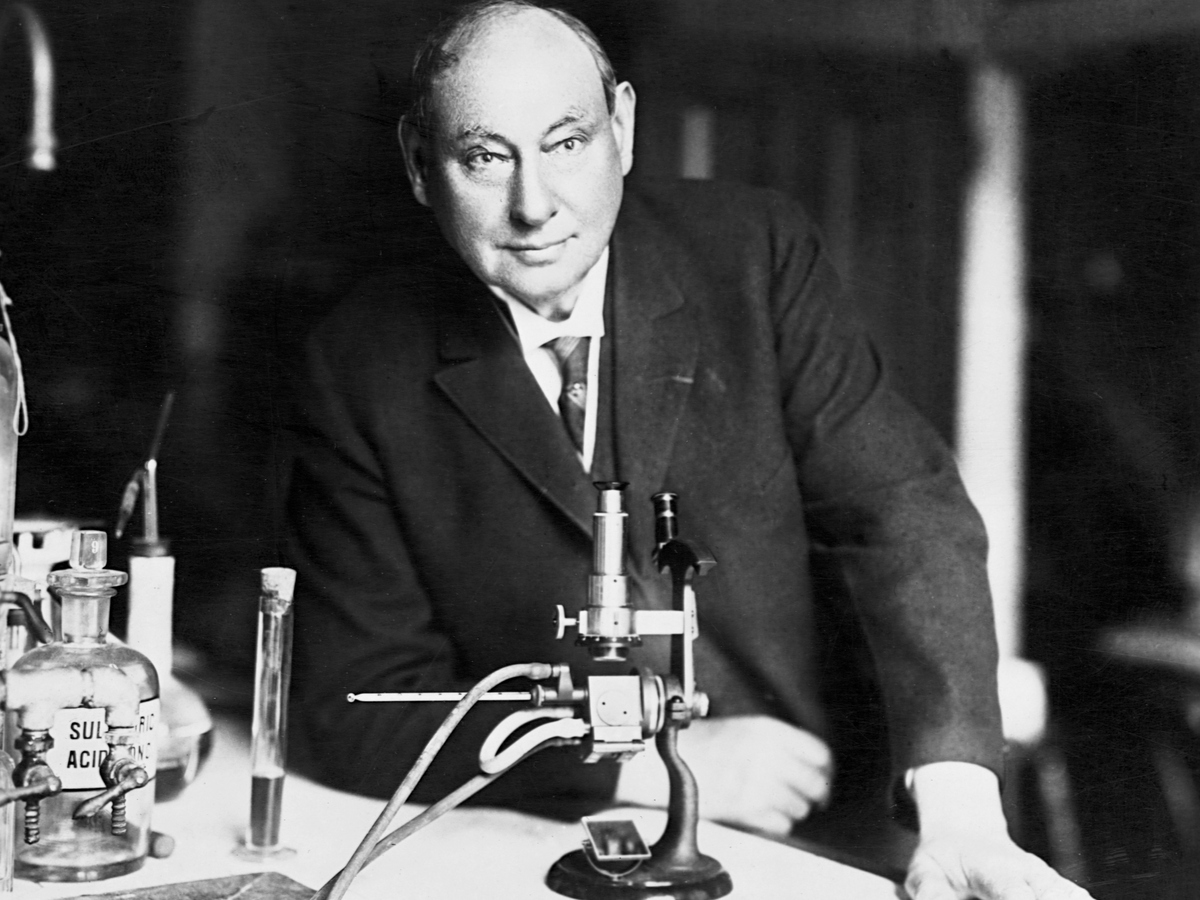 Harvey Washington Wiley was instrumental in bringing about regulations to boost sanitation and decrease food adulteration.

Unlabeled stimulants in soft drinks. Formaldehyde in meat and milk. Borax — the stuff used to kill ants! — used as a common food preservative. The American food industry was once a wild and dangerous place for the consumer.

Deborah Blum's new book, The Poison Squad, is a true story about how Dr. Harvey Washington Wiley, named chief chemist of the U.S. Department of Agriculture in 1883, conducted a rather grisly experiment on human volunteers to help make food safer for consumers — and his work still echoes on today.

Wiley was an indefatigable activist for food safety regulations during a time when the food industry was organizing and adding substances to food without any oversight, using its might to put profits before people. But Wiley and his small band of chemists began methodically testing suspected harmful additives and revealing the effects of these dangerous compounds to the government and public.

It was a long battle, but one that did make things better. Nevertheless, we still have debates today over what is safe for us to eat.

NPR's Ari Shapiro talks to Blum about her new book and Wiley, a formidable pioneer of food-safety regulations.

This interview has been edited for length and clarity, and contains some Web-only expanded answers.

You start the book by noting that we have this conception of the food our ancestors ate as being pure and authentic, straight from the farm. What was the reality?

It was about the opposite of that. To be fair, there were people who lived on the farm and ate wonderful produce from their gardens, but most people were in this period of migration to the cities. This is the rise of industrialized America in the late 19th century, so most people were eating manufactured, grocery store-bought food. I was actually shocked to discover it was horrifyingly fake, fraudulent and tainted by any and all chemicals [people] felt like putting in it.

So what might people in 1900 have found in their milk, or their coffee, or their spices?

I took a close look at milk, because it's a great example of just how bad things could get. Dairymen seeking to stretch their profits would thin it with water – and not always clean water. At one point, there was a case in Indiana in which it was pond water. The family found worms wiggling in it.

And pond water was actually some of the safer stuff that milk was contaminated with!

That's exactly right, because once you had thinned the milk, you had to reconstitute it in all kinds of weird ways. People put chalk or plaster dust in it. They sometimes put in toxic dyes to make it more golden instead of grayish or bluish. And because it was prone to rot — this was before pasteurization and refrigeration — they would dump preservatives in it. The most popular one was formaldehyde, an embalming compound, which is not good for humans to ingest. You can actually go out and see newspaper headlines around the country during this period with "embalmed milk scandals."

You tell stories of kids dying from eating candy that was contaminated with lead. Given that this was causing real suffering in consumers, what kinds of arguments were people making for leaving this unregulated? 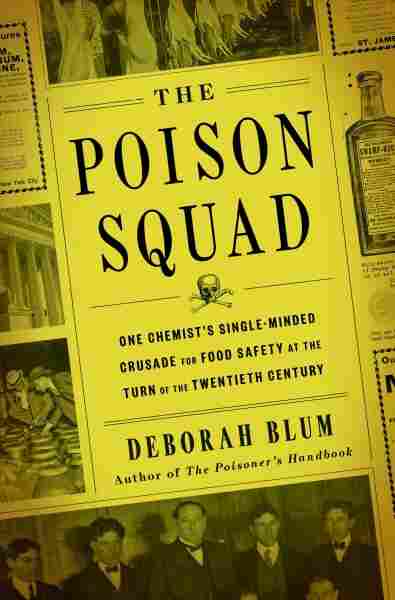 It's baffling, because you are in this period where food makers are knowingly using very bad things. I gave the example of arsenic, which was a green food dye also used to make the shellac that glosses up chocolate. But lead was used to color candies, and red lead was used in cheese. If people wanted to make a beautiful, orange cheddar cheese, they just dumped a little red lead in it. This is not people who didn't know it was bad, but there were things that made it permissible. There were no labels, and so there was no public pressure. It was just a pre-regulatory Wild West of food that permitted bad actors to do what they will, and so they did. It saved them a lot of money. You get this capitalistic feedback loop of people who were trying to make a living – and wanting to make more of a living. The consumer was both the guinea pig and the victim.

So along comes a protagonist of your story: Dr. Harvey Washington Wiley, chief chemist of the U.S. Department of Agriculture. Why did he care so much about this issue?

I've always thought of him as kind of a holy roller kind of chemist. He was the son of an itinerant preacher and farmer in Indiana who was also a conductor on the Underground Railroad. Wiley was raised to think that what he did needed to be a higher calling. He would describe chemistry that way: Chemistry is the service of good. So this tiny group of chemists that he commanded at the USDA was it on food safety. He took up that cause.

Wiley basically goes out and recruits other people at the USDA, especially young clerks, to volunteer to dine very dangerously. The idea of The Poison Squad was that these young men would get three free meals a day, seven days a week – all of them paid for by the U.S. government. They have to agree not to have snacks or eat outside of these free meals. These are super fancy meals cooked by a professional chef. All of the ingredients are amazing. The only catch is: You have to agree that half of you at any given period in this experiment are going to be given capsules that contain suspect food additives. And these did include formaldehyde, and the cleaning product Borax, and salicylic acid, which we know from aspirin. And the amazing thing is that there were people lining up to volunteer for this experiment. And you wonder, 'Is this crazy or what?' You are testing suspected toxic compounds on human volunteers. But he felt that was the only way he could deal with this. You had this rising tide of really dangerous food additives and there were no safety regulations. 'How do I make a case that perhaps this is not a good idea? I'll just test it on people.' And so he did.

To no one's surprise, if you feed people formaldehyde, or arsenic or lead, they will get sick. And when you demonstrate that, why does it still remain so difficult to outlaw these substances in food?

The food industry had been organizing itself to fight regulation. Wiley had been advocating and working with congressmen to get some kind of basic consumer protection. And these experiments caught national attention — they were front-page news, there were songs about them — and everyone was realizing that there is a lot of bad stuff in their food. There was an immediate pushback. Suddenly, congressmen are on the side of food business or getting offered more money. The food industry organizes to create a Food Manufacturers Association. They were phenomenally effective. They did a great job trying to damage Wiley's reputation publicly and deny what he was finding, and bullied and threatened congressmen to kill regulation every time it came up.

Despite these long-fought fights, today there isn't formaldehyde and lead and arsenic in food the way that there was 100 years ago. Progress really was made!

Yes, and I would be completely irresponsible if I said that food today is as dangerous as it was in the 19th century. Once the first food-safety law was passed in 1906, two years after Wiley finished his Poison Squad experiments, you see government stepping up against some of these extremely dangerous compounds. But we are still having fights about what's safe. The list of dyes that we have in food today is the exact list that Wiley approved, minus a couple that fell out when they became known to be more toxic. So we've both improved things, and not moved forward as much as Wiley would have liked or I have come to believe we should.