Accessibility links
Coffee Rust Threatens Latin American Crop; 150 Years Ago, It Wiped Out An Empire : The Salt The fungus, which has no cure, is destroying harvests in Latin America. In the 1800s, it devastated Sri Lanka's powerhouse coffee industry. And scientists say it's only a question of time. 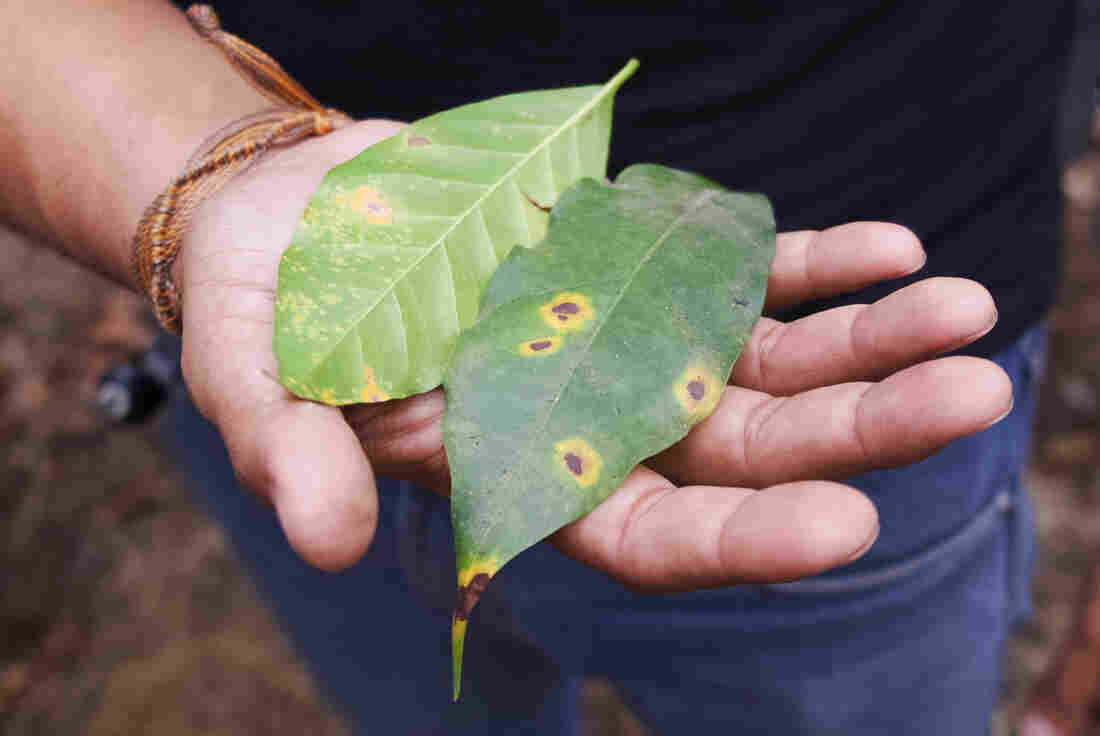 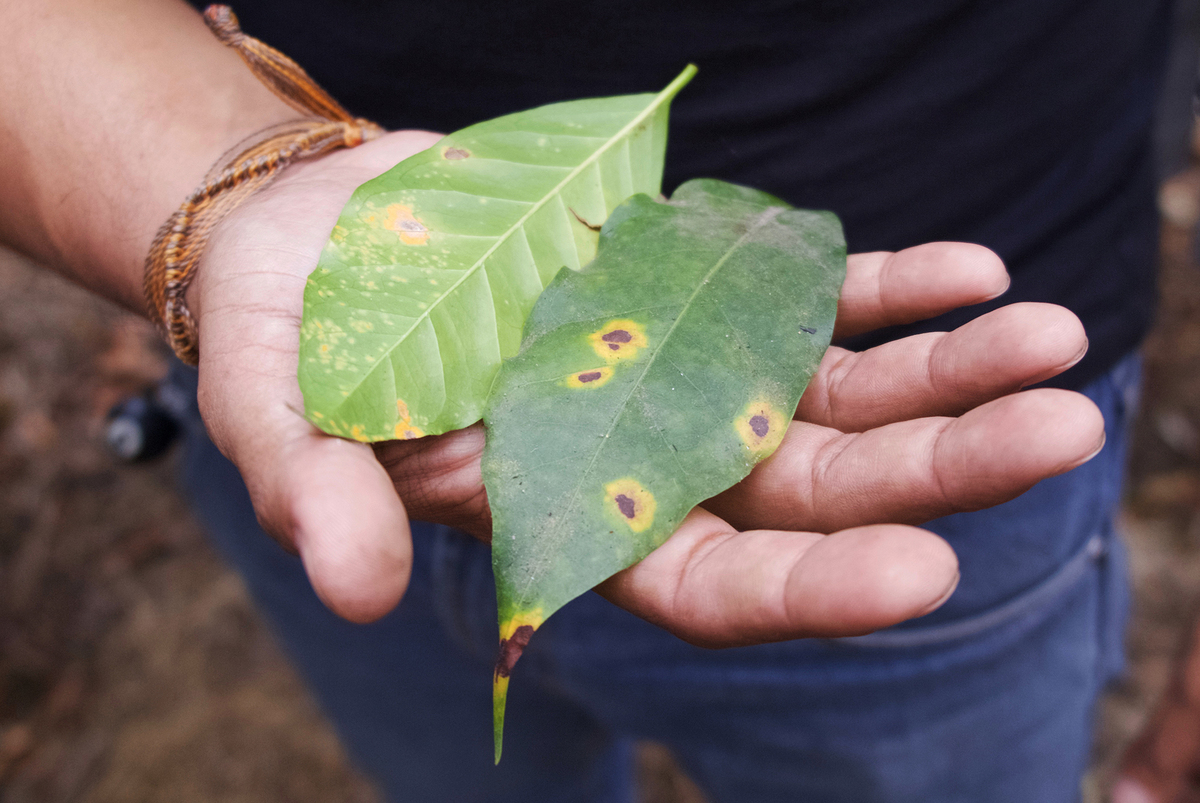 An outbreak of coffee leaf rust, caused by the fungus Hemileia vastatrix, hit the celebrated coffee-producing region in 2012, and by 2014 it had infected the entire farm. That year El Valle harvested a meager 28,000 pounds of coffee, an 80 percent drop. The next harvests were even smaller. With the lowest coffee prices in a dozen years, reviving the farm has been deeply challenging.

"We are in the middle of the biggest coffee crisis of our time," said the Guatemalan producer and exporter Josué Morales, who works with over 1,300 growers.

Central America, where smallholders with less than 7.5 acres of land produce 80 percent of the region's coffee, has been particularly hard hit by rust. Some 70 percent of the farms have been affected, and over 1.7 million coffee workers have lost their jobs. Many are leaving the coffee lands to find work elsewhere.

"The problem is not just the rust; it's the rust and catastrophically low coffee prices," says Stuart McCook, author of the upcoming Coffee is Not Forever: A Global History of the Coffee Rust. "It's difficult for farmers to weather both."

For observers of coffee history such as McCook there are strong parallels to another outbreak.

In 1869, Sri Lanka (then known as Ceylon) was one of the world's largest coffee producers, exporting over 100 million pounds annually. A new railway connected the coffee-producing center with the coast, a steady flow of cheap labor was coming from South India, and market prices were high. With a growing global demand for coffee, the future of the island's principle industry seemed assured.

But then, in the south-center of the island, small, pale-yellow spots began appearing on the upper surfaces of coffee leaves. These increased in size and coalesced with adjacent spots. On the underside of the leaves, circular, yellow-orange dustlike spores formed. New spores developed from these lesions and passed to other plants. The fungus did not kill the plants outright, but rather debilitated them. The leaves eventually fell, and nutrients to the beans got choked off, causing yields to plunge.

It was the first global outbreak of the fungus that had first been reported less than a decade before by a British explorer around Lake Victoria in what is today Kenya. Very little was known about the disease.

Farmers planted coffee elsewhere on Ceylon, but with wet and windy conditions ideal for the fungus to reproduce, their crops didn't remain rust-free for long. The spores detached into the air and floated along with the winds or rains, on field workers or birds, and even insects. Able to survive for months, the spores could, once in contact with coffee leaves under the right conditions, germinate and penetrate a leaf within a few hours. The island's coffee estates were soon engulfed. 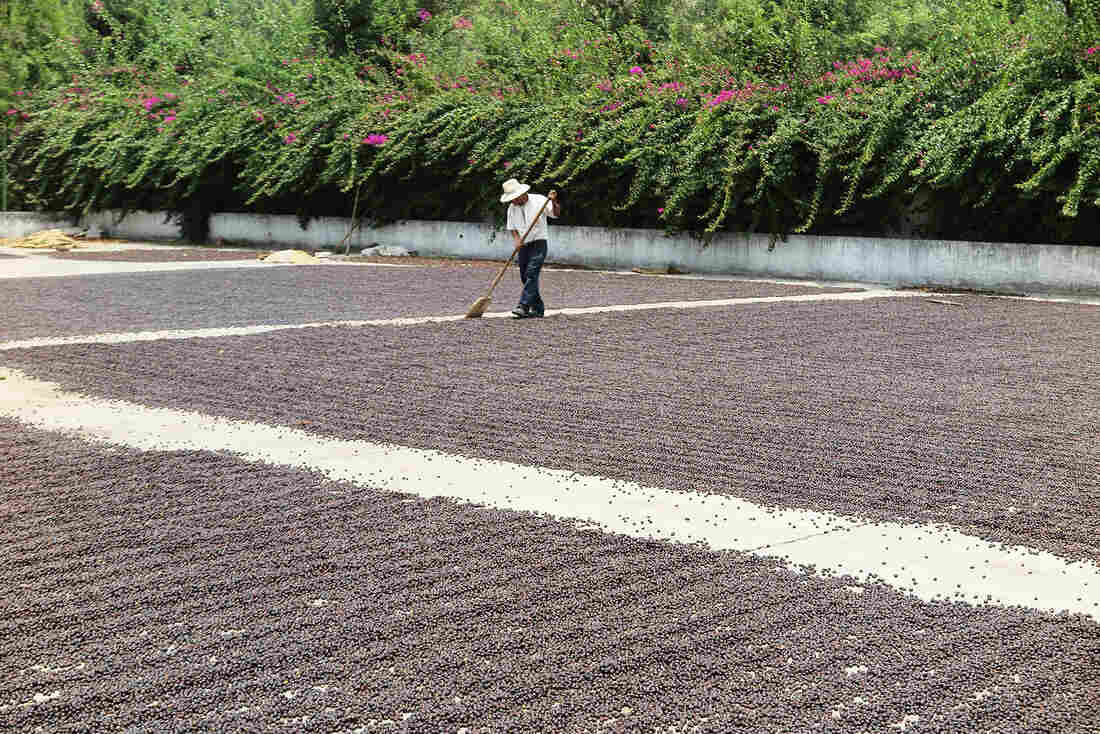 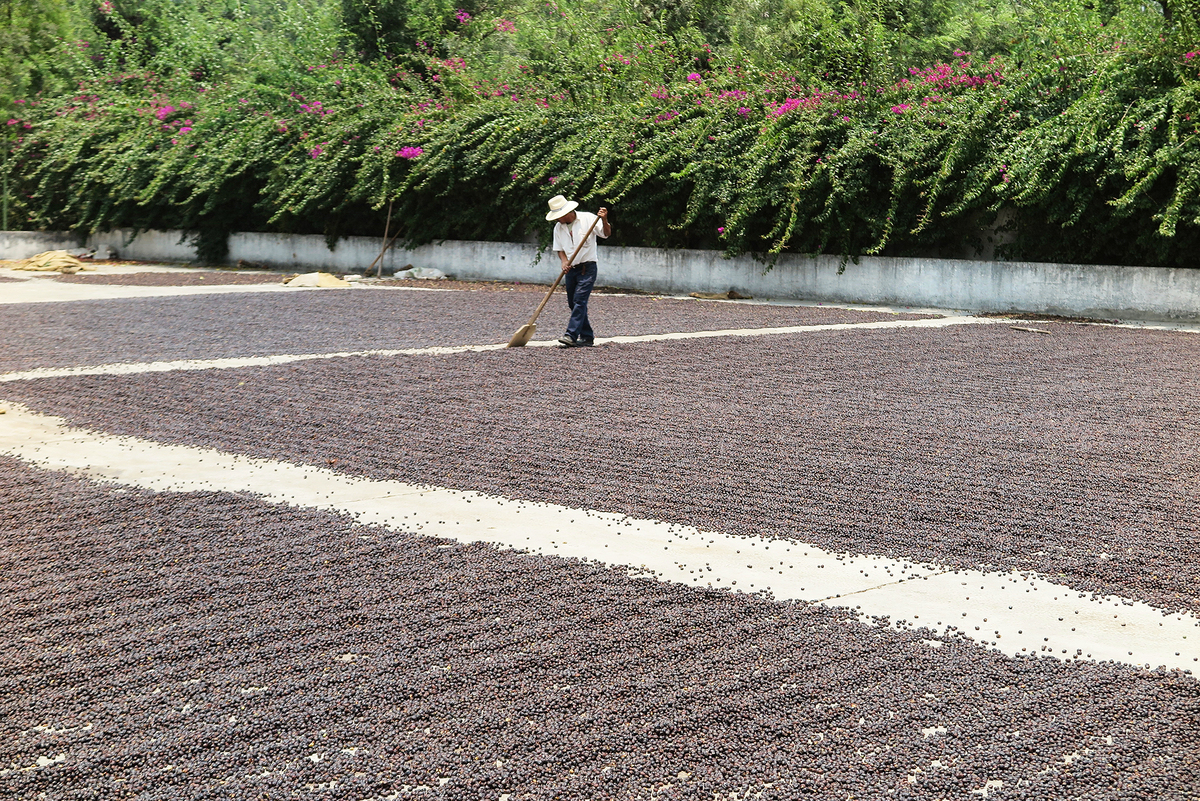 But between the increase of acreage under cultivation and high market prices, the industry remained profitable — at least initially. By 1879, however, production began a rapid and steady decline. And so did value, as the market price of coffee plummeted.

That year, London's Royal Botanic Gardens, Kew, sent an inexperienced, 25-year-old recent Cambridge grad named Harry Marshall Ward to the island. During his two-year stay, the mycologist proved that the parasitic fungus H. vastatrix caused leaf rust and he methodically worked out the pathogen's life cycle. Yet he could offer planters no means to stop the thorough destruction of their livelihood.

If the rise of the island's coffee industry was swift — it had come about in just 50 years — the crash came even faster. In 1870, Ceylon had exported some 118 million pounds of coffee. By 1886, coffee exports were down 80 percent, and by 1890 — just two decades after rust's arrival — 90 percent of the area under coffee cultivation had been abandoned. The crop virtually disappeared from the island.

"Once coffee rust had broken out in Ceylon, the global epidemic was inevitable," says McCook. By 1920, it had affected most of the coffee-producing countries in Asia and Central and East Africa.

The coffee industry in Latin America, meanwhile, was burgeoning, as it remained isolated from rust.

But when rust reached the west coast of Africa in the 1950s, one of the all-time catastrophic plant diseases was just a direct shot across the Atlantic on oceanic winds.

In 1970, rust surfaced in Brazil. Panic swept through the industry. Coffee beans were central to the region's economy and a key export. The Colombian Federation of Coffee Growers predicted losses of up to 80 percent for its farmers. In a dozen years, rust had spread to every major coffee-producing country in the Americas.

For a few decades, the region managed to avoid a Ceylon-like meltdown through an array of modern tools. These included replanting infected farms with newly developed hybrid varieties that, while inferior-tasting to traditional Arabica, had strong genetic resistance to rust.

Especially in the last decade, however, waves of outbreaks have devastated Latin America, which produces about seven-eighths of the world's Arabica coffee beans. Since 2012, some farms have seen a 50 to 80 percent loss of production, though several countries have been able to return to near pre-rust numbers through systematic replanting of resistant varieties.

Coffee rust has no cure. Its impact can be reduced to an extent, but not eradicated. Scientists are warning that resistant varieties are not a long-term solution. The fungus is evolving and will likely overcome resistant genes eventually – "in five years, in one year, in 10 years," says Benoît Bertrand, one of the world's foremost coffee geneticists, at CIRAD, the French agricultural research organization. "We know it is a question of time."

With the global demand for coffee — especially gourmet coffee — continuing to grow, Latin America is unlikely to switch crops. That's what Ceylon did — very successfully: Today, Sri Lanka is the world's fourth-largest producer of tea.

Jeff Koehler is the author, most recently, of Where the Wild Coffee Grows: The Untold Story of Coffee from the Cloud Forests of Ethiopia to Your Cup. Follow him on Twitter @koehlercooks.