Accessibility links
Scotland's $2 Billion Salmon Industry Is Thriving — But At What Cost? : The Salt The growth of the country's farmed salmon sector has reached such a critical point that, if not addressed, may cause "irrecoverable damage to the environment," a government report says.

Scotland's $2 Billion Salmon Industry Is Thriving — But At What Cost?

Scotland's $2 Billion Salmon Industry Is Thriving — But At What Cost? 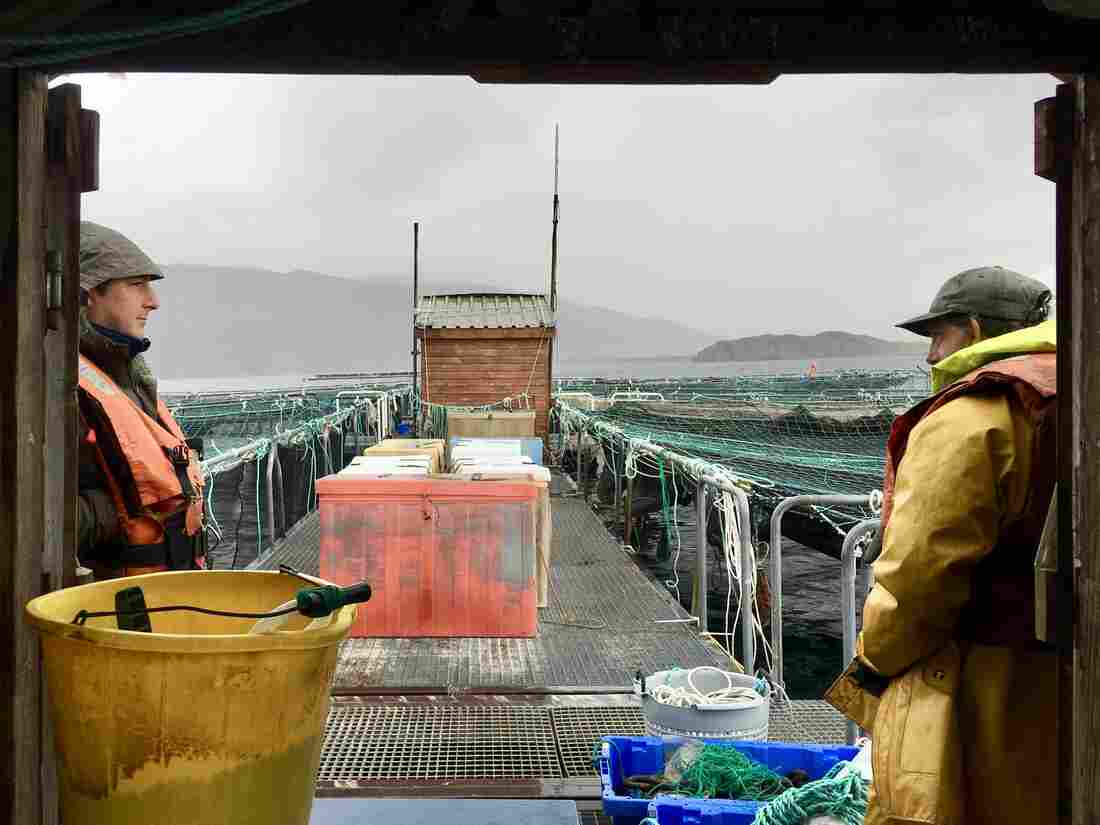 Two workers weather a summer storm at a salmon farm near the small Highland town of Ullapool. The link between Scotland's wild fish declines and the rise of salmon farms is a point of contention. Eileen Guo for NPR hide caption 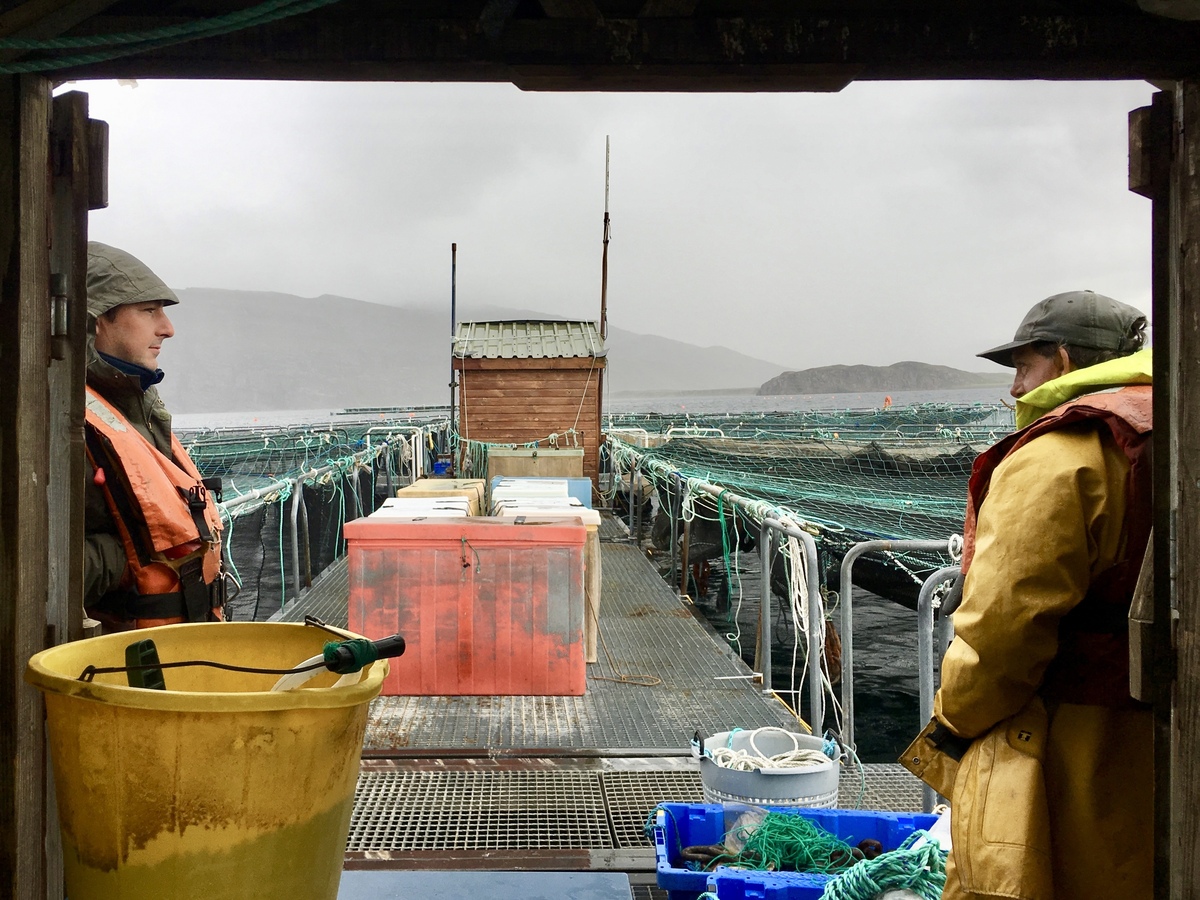 Two workers weather a summer storm at a salmon farm near the small Highland town of Ullapool. The link between Scotland's wild fish declines and the rise of salmon farms is a point of contention.

When you think of Scottish food, your first thought might be haggis, but the country's No. 1 food export is actually farmed Atlantic salmon.

Last year, almost $786 million worth of Scottish salmon was exported globally, with the United States as its largest market. The aquaculture industry, which already contributes $2.85 billion to the U.K. economy, has ambitious targets for growth. The Scottish Salmon Producers' Organization, the main industry group, aims to more than double production to as much as 400,000 tons by 2030.

That growth, however, comes with high costs for Scotland's environment.

That, at least, is the conclusion of a March government report, which echoes the concerns of environmental and community groups. The report, part of an ongoing inquiry by the Scottish Parliament's Environment, Climate Change and Land Reform Committee, found that the country's farmed salmon sector is reaching a critical point in which "the status quo is not an option."

"If the current issues are not addressed," the report says, plans for expansion "may cause irrecoverable damage to the environment."

Not long ago, "Scottish salmon" referred to wild rather than farmed fish.

The country's coastline, split between the waters of the Atlantic Ocean and its famous lochs and "burns" (as rivers are called in Scotland), provides a rich natural habitat for salmonids (both salmon and sea trout) at every stage of their life cycles. Smolts hatch in shallow streams, make their way to the ocean, spend several years at sea, and then return home to breed in the same rivers of their birth.

Along the way, the salmonids make for great fishing, and Scotland's salmon rivers have become regular — if pricey — destinations for visitors from around the world.

The first Scottish salmon farms opened in the late 1960s, at a time when wild fish populations had already begun to decline. Rising seawater temperatures and rumored Russian trawlers off the coasts had affected fish numbers, but the decline was worse in the Highlands and Western Isles, where many salmon farms are still located.

Last year, one of Scotland's most closely monitored salmon rivers, the River Awe, had the lowest numbers on record — 480 salmon — since record-keeping began in 1964, much fewer than 2016's salmon count of 807.

The link between Scotland's wild fish declines and the rise of salmon farms is one of the many points of contention between pro- and anti-fish farming interests.

On the one side are the aquaculture businesses, and the supporters of the 2,472 jobs that the sector brought to the Scottish Highlands in 2016. On the other side are wild fish advocates, environmental organizations, and coastal community groups concerned about the sector's environmental impacts.

But the debate does not simply pit economics against the environment; increasingly, it's also become a debate over the science itself. Both sides recognize that there are gaps in research, but they disagree on what to do about it.

In June 2017, as the salmon run on the River Awe was collapsing, Salmon & Trout Conservation, a wild fish advocacy group, lodged a formal petition for the Scottish government to investigate the salmon farming sector. 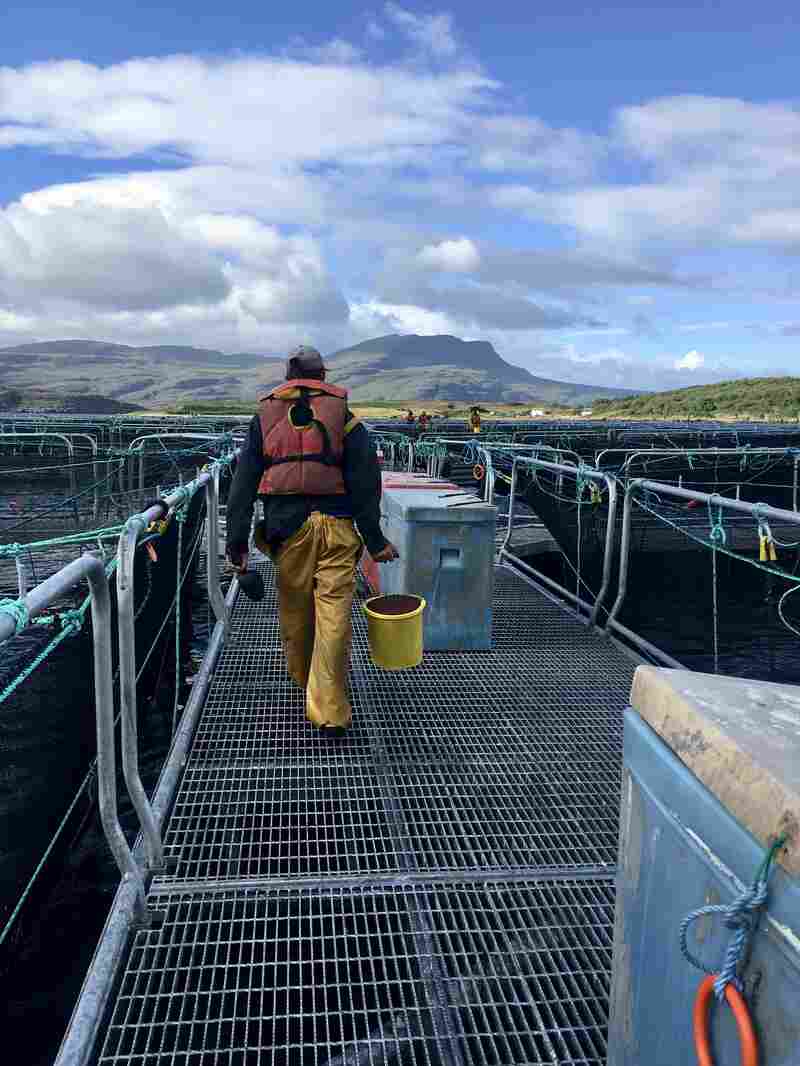 A worker heads out to hand-feed fish at a Scottish salmon farm, a method that is unusual among fish farms. Eileen Guo for NPR hide caption 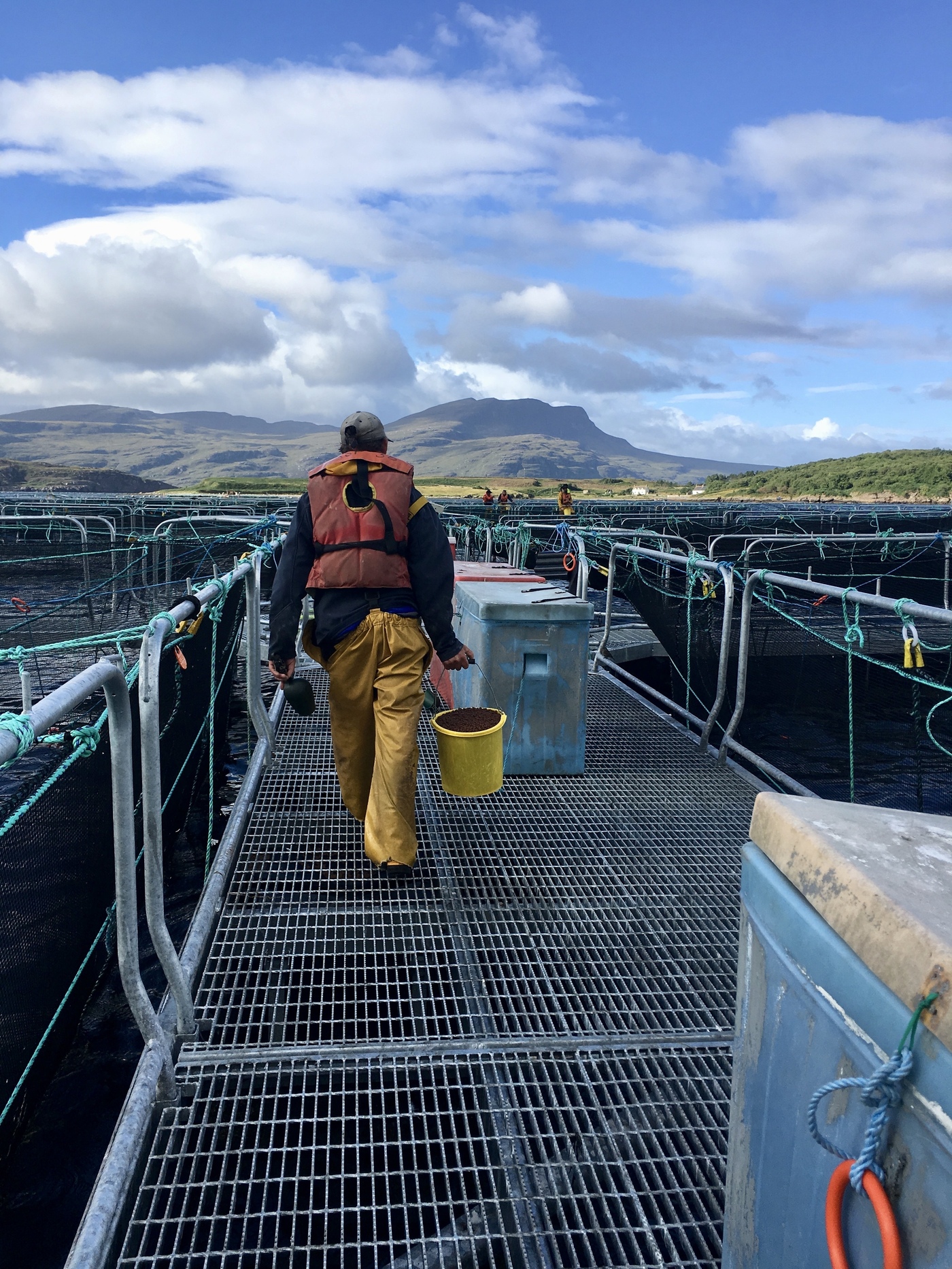 A worker heads out to hand-feed fish at a Scottish salmon farm, a method that is unusual among fish farms.

The reports lay out the environmental issues — as well as responses to them — such as sea lice infestations, disease outbreaks, fish escapes, feed sustainability, and biological and medical waste. Because Scottish salmon farms consist of large, open metal cages that sit above the seabed, everything that goes in or comes out also affects the marine ecologies surrounding them.

The reports note that the issues in this year's review are not new; they were in fact highlighted in an earlier government inquiry from 2002 and, according to the new data, the sector has made little progress in addressing them since then. Instead, the salmon industry has continued to grow, with each new or expanded fish farm amplifying the negative impact on the environment. This year's reports conclude that the industry's ambitious growth targets fail to "take into account the capacity of the environment to farm that quantity of salmon."

Pro-aquaculture interests, such as the Scottish Salmon Producers' Organization (SSPO), the largest industry group, disagree. In its written response to the committee, SSPO contends that "any potential impacts on wild fish are not understood, and the science is particularly lacking for Scotland."

Rather, the SSPO says that many of the studies rely too heavily on data from Norway and Ireland, but "Scotland is different in many regards, for example, in its regulatory framework, farming environment, and scale of production."

While the government report recognizes that there are gaps in research on Scotland in particular, critics contend that there is enough information to move forward with stronger regulations.

"It's the same species of fish in both places. Ireland is south of Scotland and Norway is north," says John Aitchison, a documentary filmmaker who led a successful community petition against a planned farm site in the Sound of Jura in western Scotland.

Aitchison continues, "And it's the same fish that go to the same places. All their life cycles are the same, so you could turn that question on its head and say, on what basis do you think this wouldn't apply to them if it's close to those two countries with oceans straddling Scotland?" 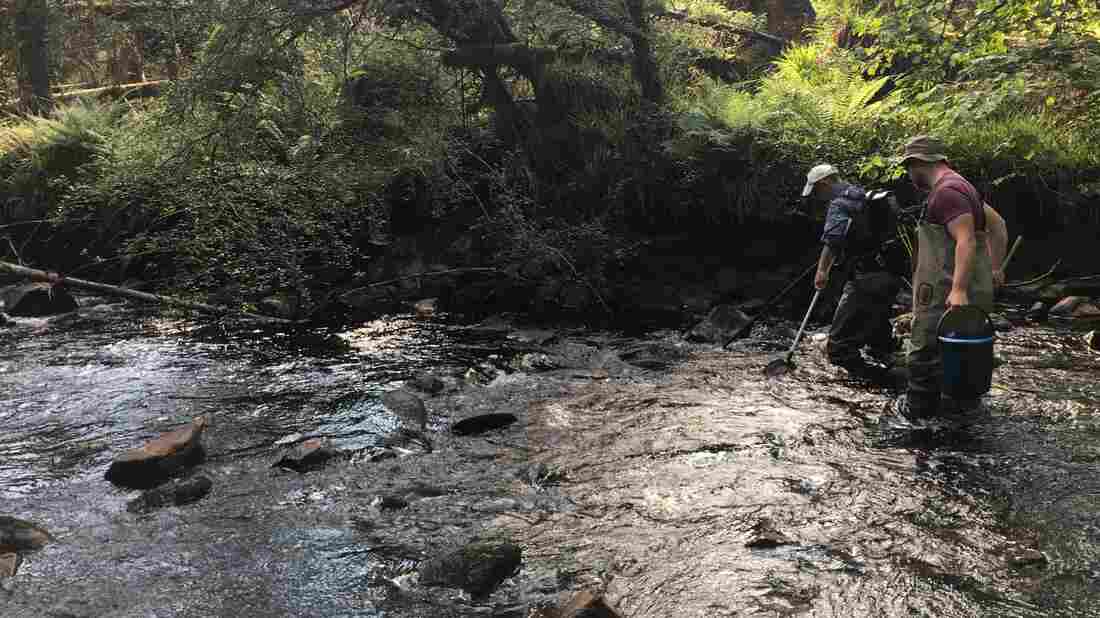 Scientists in Scotland monitor the wild fish population. The aquaculture industry contributes more than $2 billion to the U.K.'s economy, but not without risk to the environment. Eileen Guo for NPR hide caption 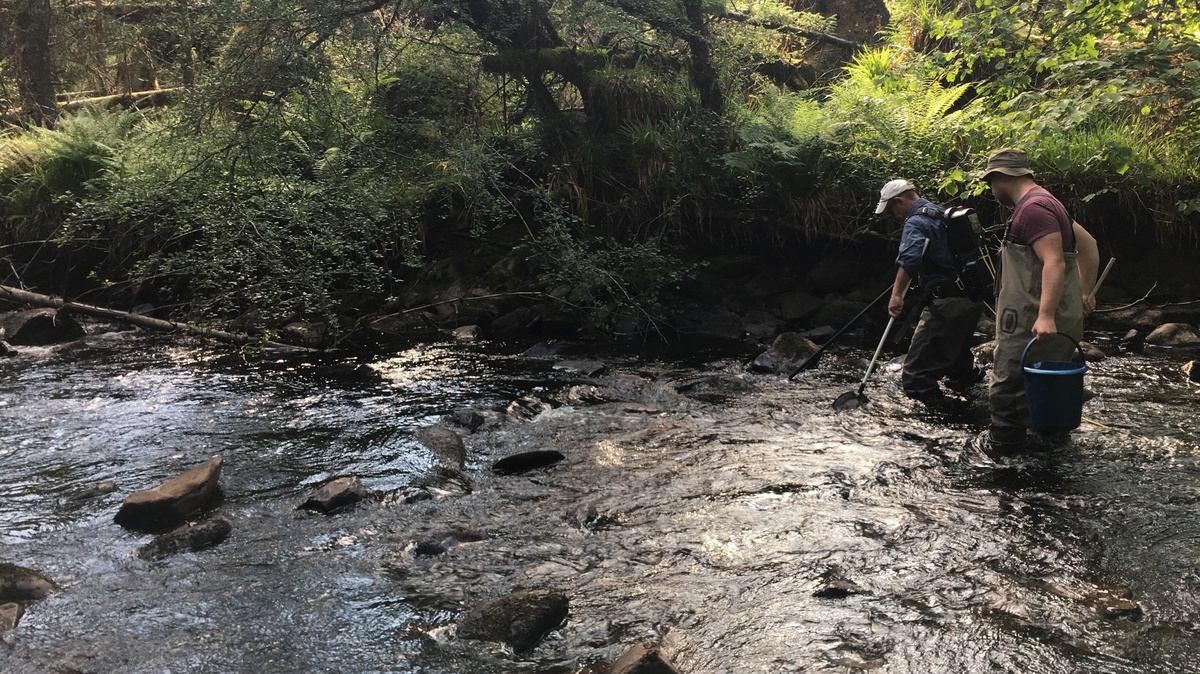 Scientists in Scotland monitor the wild fish population. The aquaculture industry contributes more than $2 billion to the U.K.'s economy, but not without risk to the environment.

For Dr. Richard Luxmoore, a conservation advisor for the nonprofit National Trust for Scotland, SSPO's questioning of the science is just "mental acrobatics" in an attempt to "highlight uncertainty and undermine the overwhelming evidence."

Both Aitchison and Luxmoore call for moratoriums on fish farm expansions until the environmental impacts are better understood — something that the government reports have not gone so far as to suggest, as SSPO General Manager David Sandison pointed out in an email to NPR.

The parliamentary committee is expected to publish its findings sometime this fall, but release of those findings has already been delayed several times, likely because of the challenge of reconciling environmental and economic interests.

And while there are certainly parties that want to see the aquaculture industry disappear from Scotland entirely, most critics — including Luxmoore — are more circumspect.

"Salmon farming is extremely important to the rural economy, and so obviously no one wants to see such an important industry unnecessarily damaged," says Luxmoore, "So the question is: How can we persuade the industry to move in a direction which basically avoids this damage, while still being allowed to practice?"

Eileen Guo is a journalist based in New York City who writes about food, culture and identity.