Accessibility links
Brewers Say Don't Cry In Your Beer Over Global Warming : The Salt A scientific paper published this week predicts climate change will send beer prices skyrocketing and drastically reduce the barley crop. It got tons of media attention. But is beer really doomed? 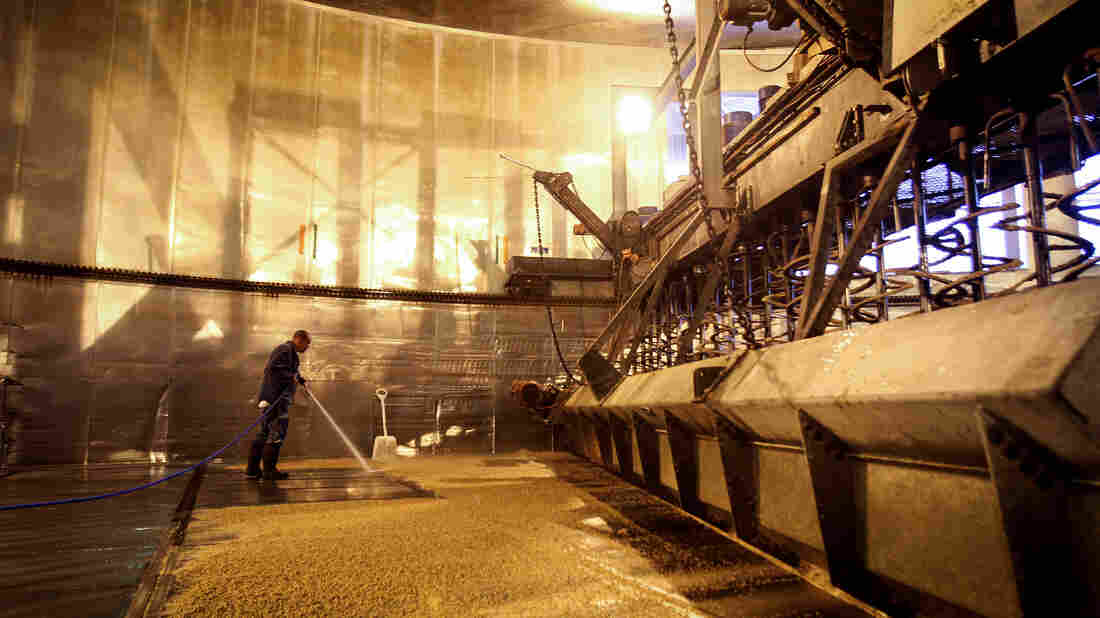 The barley used to make beer as we know it may take a hit under climate change, but growers say they are already preparing by planting it farther north in colder locations. Dean Hutton/Bloomberg via Getty Images hide caption 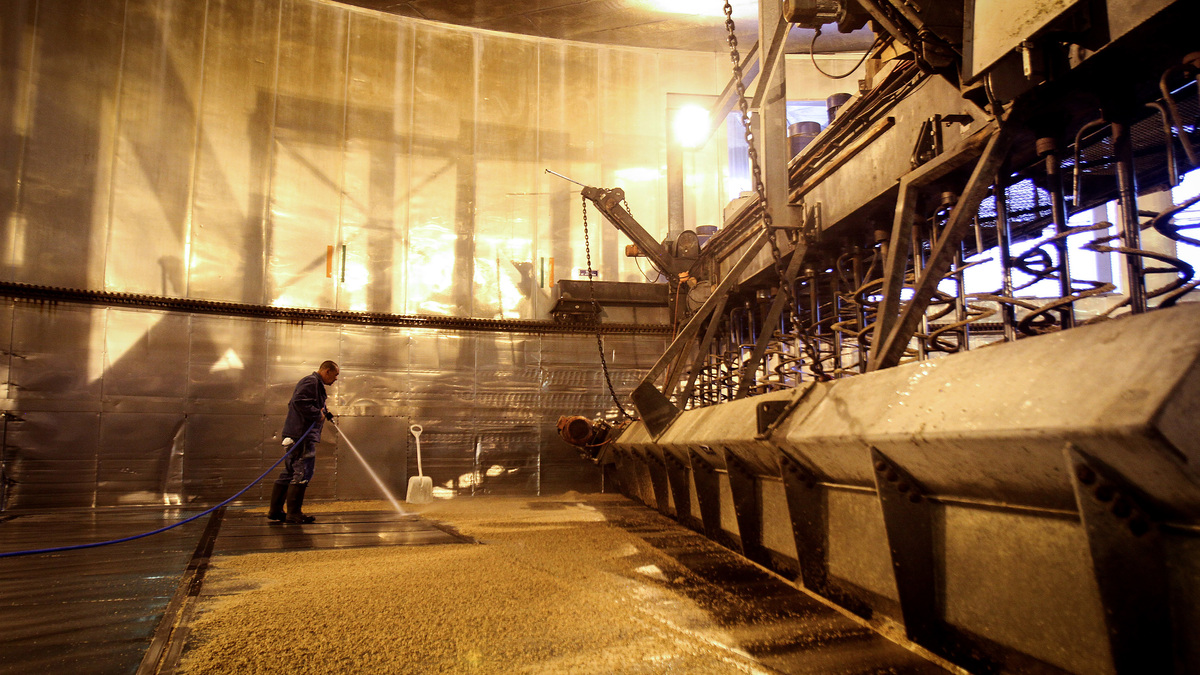 The barley used to make beer as we know it may take a hit under climate change, but growers say they are already preparing by planting it farther north in colder locations.

Research published this week predicting that beer prices could double as rising global temperatures and more volatile weather cause shortages of barley created a big splash. Twitter users and major news outlets widely circulated the dire headlines. But brewers and barley growers say you shouldn't drown your sorrows just yet: They have a plan.

The paper, published Monday in the journal Nature Plants, warns of "serious supply disruptions" of barley. Analyzing several possible climate change scenarios, the authors find that global yields could drop 17 percent during severe droughts and heat waves in the future and that beer prices could spike calamitously.

However, some in the beer industry think the findings are overblown.

"While climate change is a cause for concern, this study isn't a great indicator of what is going to happen in the real world," says Bart Watson, chief economist at the Brewers Association, a trade group based in Boulder, Colo. Watson believes the industry — especially the agricultural sector — will adapt as the planet's climate changes, thereby avoiding such significant impacts.

Beer Prices Could Double Because Of Climate Change, Study Says

So does Dwight Little, president of the Idaho Grain Producers Association, which represents wheat and barley farmers in Idaho, the country's top barley-growing state.

"If warming happens as they say it will, my impression is that it will come in small, incremental increases over a long time, and that allows farmers time to change," he says.

In their paper, a team of 10 scientists from China, Britain, the United States and Mexico warn that crop damage from worsening droughts and heat waves could cause global beer production to tumble by 16 percent. This will cause global beer prices to increase, possibly doubling on average. The research also warns that a serious hit to barley yields will disproportionately impact brewers. That's because livestock farmers who feed barley to their animals will be forced into competition with beer producers for limited supplies of the grain. And, under such economic conditions, beer will lose.

"Our analysis showed us that we're probably going to prioritize the food over the luxury beverage," Steven Davis, a co-author of the paper and an associate professor of earth system science at the University of California, Irvine, tells The Salt. "In many cases, the affluent consumers will just pay more for their beer, but someone's going to have to do without the barley, and it looks like the beer industry as a whole will do with less."

Overall, consumption could drop by 29 billion liters. That's about how much beer Americans drank in 2011, according to the research.

The study corroborates prior findings about grains and climate change. A 2017 study from the University of California, Davis predicted that higher temperatures in spring and summer could reduce the yields of many grains important to beer by the end of the century. It predicted winter wheat yields would drop by 21 percent, winter barley by 17.3 percent and spring barley by 33.6 percent.

The new Nature Plants paper made headlines in major news outlets on Monday: "Climate Change Might Double the Cost of a Beer," Wired reported; and "Heat and Drought Could Threaten World Beer Supply," warned The New York Times the same day.

But Greg Koch is not especially worried.

"I saw the headlines, but I didn't take the clickbait," says Koch, co-founder of Stone Brewing in San Diego. Koch is deeply concerned by the many ways people are negatively impacting the planet, but he says he is a bit frustrated that people have latched on to a relatively unimportant consequence of human activity — beer shortages.

Little at the Idaho Grain Producers Association doesn't believe that barley farmers will be hit as hard as Davis and his co-authors have predicted.

"There are lots of things farmers can do to adapt to changing climate," Little says. Farmers routinely deal with "extremes" of weather, often by adjusting their planting schedules. In some instances, when extreme heat or drought threatens a crop on irrigated land, farmers can often simply apply more water, which can offset heat effects.

"I just don't see us being unable to produce however much barley brewers want," Little says.

In their research, Davis and his colleagues studied extreme weather events, especially droughts and heat waves, which could increasingly occur simultaneously — a double whammy for agricultural crops. Davis says that if humans fail to significantly reduce their use of fossil fuels — the main source of planet-warming pollution — weather events so extreme that they currently strike only once every 100 years could occur as often as every 24 months.

"And that's just the frequency of them," he says. "The severity is also likely to increase."

As for the impacts to the beer industry, there is an important caveat to the research — and one that Davis is upfront in explaining: He and his co-authors assumed in their modeling that all factors other than the Earth's climate remain stable in the future.

"All of our analyses are premised on the world as it exists today, so we don't really fold any projections of economic growth or population growth into these results," Davis says. The idea, he says, was to isolate and better understand the specific effects of warming without complicating factors.

The 2017 UC Davis study did more or less the same thing.

Watson at the Brewers Association feels these assumptions have led to overstated impacts of global warming on beer production. He says the research "builds in a number of unrealistic assumptions." Barley production is already shifting, according to U.S. Department of Agriculture data cited by Watson in a recent blog post. Data show a growing percentage of the crop coming from Canada, indicating a northward shift into latitudes that may remain cooler in a warmer future.

Davis agrees that adaptation efforts such as this one could buffer the barley industry against impacts, but he stands by the paper's conclusions.

"We've already made a lot of progress in creating new grain varieties and producing more from less land and in places where conditions can be harsh," he says. "Even still, it seems hard to fathom that they will come up with a variety of barley that can withstand the extreme weather events we looked at."

Davis has contributed to numerous other studies analyzing causes and impacts of climate change, including meat production in Brazil, lethal air pollution in China and mass mortality from heat waves in India. Indeed, in the introduction to their analysis, Davis and his colleagues acknowledge that a price hike for beer is "not the most concerning impact of future climate change."

Asked whether he and his colleagues plan to build upon the new findings with further research, Davis says he isn't sure.

"We're interested in beer, but we also don't want to make this the crux of our efforts to mitigate climate change," he says.