Accessibility links
Microplastics Are Turning Up Everywhere, Even In Human Excrement : The Salt A very small study shows that microplastics are in human waste in many parts of the world. While it's not entirely clear what that means for our health, it might be a sign that we need to pull back.

Microplastics Are Turning Up Everywhere, Even In Human Excrement

Microplastics Are Turning Up Everywhere, Even In Human Excrement 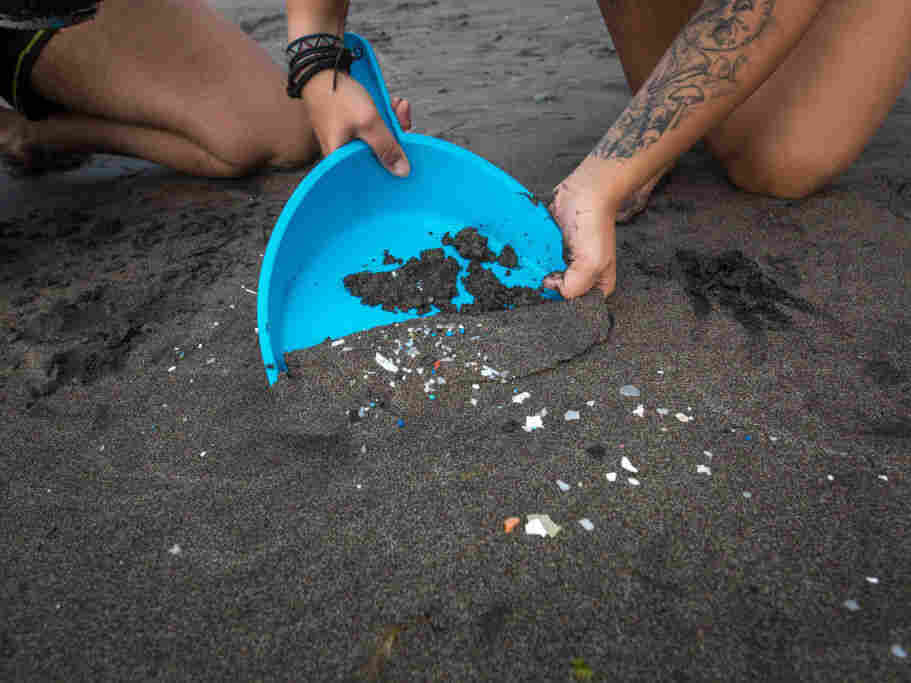 Microplastics are not just showing up on beaches like this one in the Canary Islands — a very small study shows that they are in human waste in many parts of the world. Desiree Martin/AFP/Getty Images hide caption 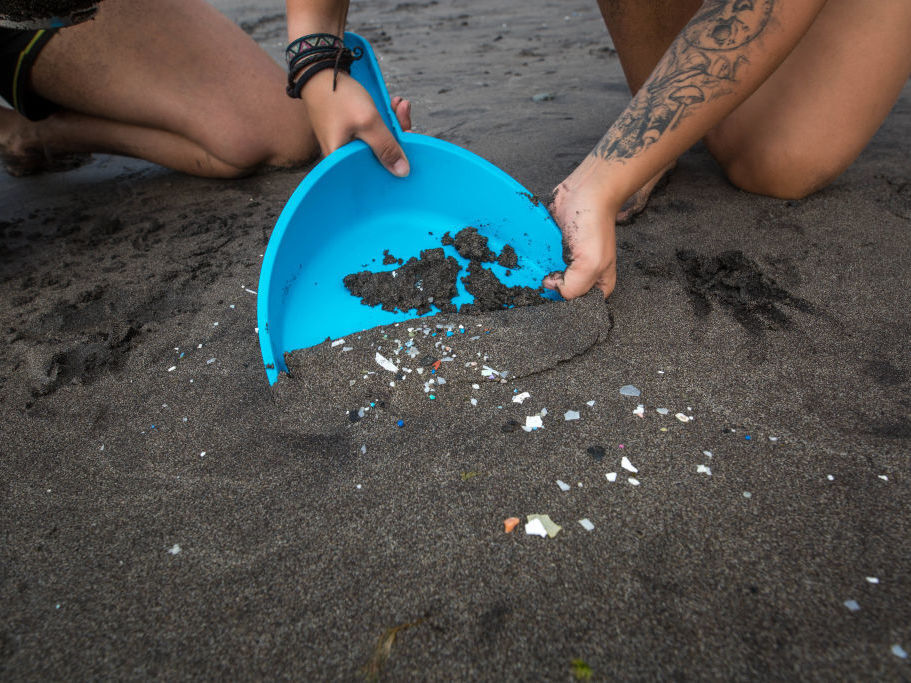 Microplastics are not just showing up on beaches like this one in the Canary Islands — a very small study shows that they are in human waste in many parts of the world.

Microplastics have been found in human stool samples from countries in many parts of the world, according to a small pilot study being presented this week at the 26th annual United European Gastroenterology conference in Vienna.

The study, conducted by researchers from the Medical University of Vienna and the Environment Agency Austria, looked at stool samples from eight individuals in eight different countries: Finland, Italy, Japan, the Netherlands, Poland, Russia, the U.K. and Austria. Every stool sample tested positive for up to nine different plastic types, with an average of 20 particles of plastic per 10 grams of stool.

"Personally, I did not expect that each sample would ... [test] ... positive," says lead researcher Dr. Philipp Schwabl of the Medical University of Vienna. He and his colleagues found that all eight stool samples contained polypropylene and polyethylene-terephthalate particles, which are major components of plastic bottle caps and plastic bottles. "Is it harmful to human health? That's a very important question and we are planning further investigations."

In the study, which is the first of its kind, each person ate their regular diet and kept a food diary in the week leading up to their stool sampling. All participants were exposed to plastics by consuming foods that had been wrapped in plastic as well as beverages in plastic bottles. None of the participants were vegetarians, and six of them consumed wild fish.

The concern, says Schwabl, is whether microplastics might be "entering the blood stream, lymphatic system and ... even reach the liver." He notes that in animal and fish studies, microplastics have been shown to cause intestinal damage and liver stress.

The world produces about 400 million metric tons of plastic a year, the equivalent of 882 billion pounds, and 80 percent ends up deposited in landfills and other parts of the environment. The smallest particles, the microplastics, range from 10 nanometers — so tiny they are invisible to the human eye — up to to 5 millimeters in diameter. Microplastics — including microfibers from clothing — are floating in the air and are found in most of our bottled and tap water, our beer, our sea, rock and lake salt, and our soil.

"This study is brilliant and ingenious," says chemist and microplastics expert Shari Mason of the State University of New York at Fredonia. Mason was not involved in the study. "They've definitively established what so many of us suspected — we're ingesting these plastics."

The question now, Mason says, is: What is being retained rather than excreted? And what is its impact?

Are We Eating Our Fleece Jackets? Microfibers Are Migrating Into Field And Food

Not only is the potential migration of the plastics throughout our body a concern, but the additives in plastics may carry health risks. Many of these additives are known endocrine disrupters. According to Dr. Herbert Tilg, president of the Austrian Society of Gastroenterology and chair of the UEG Scientific Committee, microplastics could possibly be one of the factors contributing to inflammatory bowel syndrome or even colon cancer, which is on the rise among young adults.

"Colon cancer is increasing in young people, and we think that either dietary or environmental components are a factor," he says. "Now that we know we can detect microplastics in humans, we can develop larger studies, in both healthy and diseased patients, to find out if they are a contributing factor." Tilg was not involved in this study.

So how can we minimize our exposure to microplastics? Rochman says for water, "reverse osmosis filters are beautiful, and we use them in our laboratory." HEPA filters also can clean the air of small particles, she says. One can avoid plastic bottles, but even so, plastic wrapping and containers are ubiquitous for food, and plastic is everywhere around us.

"Our love affair with plastic is so huge," says Mason, "it will take time to change our current situation. People are starting to look at truly biodegradable plastics made out of hemp or corn starch, and I think that will be the ultimate solution to this multifaceted problem."

Rochman was not surprised that microplastics are being found in human stools. "We've mismanaged our waste," says Rochman, "and it's come back to haunt us at our dinner table. Now we are literally eating our own trash. We can do better than that."

Meanwhile, Schwabl says he and his colleagues are applying for funding so they can try to replicate their initial findings in a larger study.

An earlier version of this story stated that the world produces 400 tons of plastic a year. The actual figure is 400 million metric tons, or 882 billion pounds. It also misspelled Dr. Philipp Schwabl's last name as Scwhabl on a second reference.